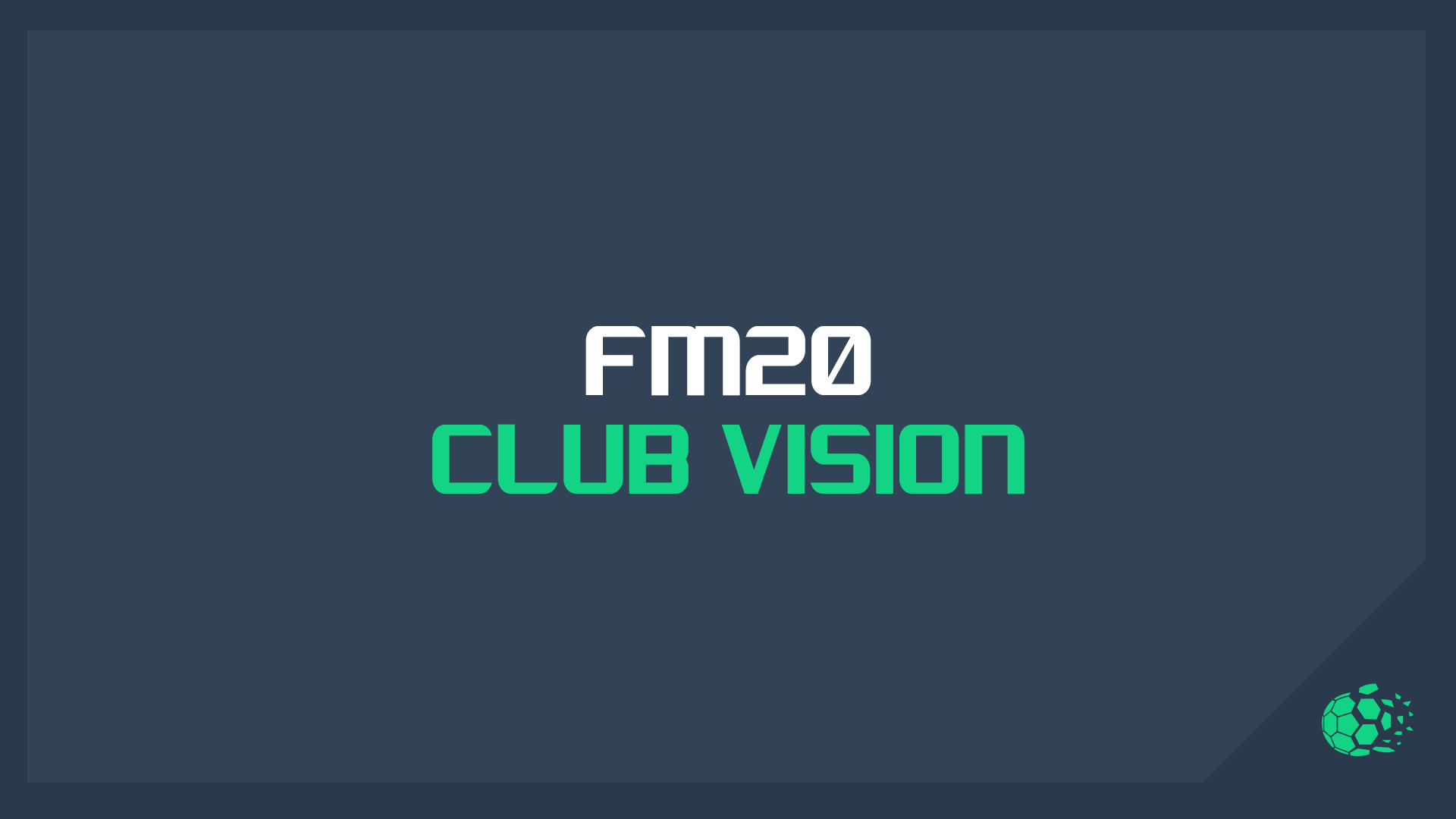 Meeting the expectations of the board has always been one of your key tasks in Football Manager but for FM20 we’ve overhauled the entire boardroom experience to make it more unique to each team and tied into the long-term progression of the club.

In FM20 we’re introducing Club Vision, which will have a far-reaching impact that goes far beyond the boardroom. Now, the board don’t just lay out their expectations for the season ahead but plot a course for the club to progress to in seasons to come. It’s your job to strengthen the club’s identity and meet the milestones set out by the board as part of their long-term planning.

As we’ve seen over the past decade, boards have had a greater say in not only how the club is run as a business but in footballing matters too. This is replicated in FM20 through club culture objectives. These objectives can include set targets around the club’s transfer policy as well as the style of football the board expects you to play. The board will place almost as much importance on your ability to hit the club culture objectives as they do on your ability to hit your season expectations.

Five-year plan objectives are split season-by-season and show a pathway to your club either achieving a higher status within the game (if you have a very ambitious board) or consolidating your position (if you have a less ambitious board). These objectives might include a mixture of financial, infrastructure and competition objectives across five years to achieve the board’s ultimate vision. For example, if you’re at an ambitious second division club with the goal of turning out in European competition your five year plan may look like this: win promotion to the top division in the first season, secure your place in that league the following season, establish yourself in the league in season three, become the “best of the rest” in season four and finally finish in the European places by the fifth season.

Ongoing objectives are tasks that you will be expected to stick to during your tenure as manager. These objectives are ingrained into the identity of the club so, for example, if your club has a long-standing tradition of bringing players through the youth system then it will be up to you, as a manager, to maintain that.

You will be able to negotiate your club vision at the end of the season or when you take a new job. During these meetings, the board will lay out the current club culture, ongoing and five-year plan objectives before moving on to the negotiation stage of the meeting.

You’re able to suggest bringing objectives in your five-year plan forward or pushing back by a season or two, depending on how your team is progressing towards the club’s overall vision. You can also suggest changing the objectives themselves. Let’s say you’ve been tasked with winning silverware in the next three years. You could negotiate with the board to remove this objective but you’ll need to offer something in return, such as qualifying for Europe one season earlier than expected or delivering a large increase to the club’s commercial revenue. However, if you then fail to achieve them in that time-frame you could find yourself in hot water with the board.

As part of these meetings, you can also adjust your season expectations, including the option to ask the board to not judge you on a certain competition. This could be particularly useful if you’re doing well in the league and want to sacrifice your performances in a cup competition to give you the best chance of achieving a good finishing position in the league. The board may, however, expect more from you in the remaining competitions.

Your club’s visions are dynamic and will change as you progress through the game. Achieving a period of sustained success and hitting your objectives early may lead to the board setting more ambitious targets over the following seasons. You’ll also be given new objectives when you join a new club that are contextualised to that club’s culture and position within the footballing world. This helps to keep long-term saves feeling fresh and ensures you will be challenged wherever you decide to move next.


What you become known for as a manager can also have a bearing on your appeal to club boards across FM20. For instance, if you’ve honed a particularly attacking style of football at a club, you’ll be known for this around the world which could make you more appealing to a board that has that playing style included as part of their club vision. This could even lead to you being picked ahead of the other candidates, even if you have less experience or are managing at a lower level than your competitors for the role.

Your Club Vision will first be presented to you in the new welcome meeting, another major element of a wider overhaul to the boardroom experience in FM20. The first thing you’ll do once you’ve selected your club or taken a new job in a save is to take part in a meeting within the new boardroom 3D environment. Like all of the environments that we introduced in FM19, the boardroom environment is scalable and will change depending on the level of the club you are managing.


During this meeting you’ll learn more about the club, get an idea of the players at your disposal – including your best matchday squad – and have the opportunity to schedule in the manager inductions that will guide you around the key areas of the game. Once you’ve completed the welcome meeting you’ll be taken to your inbox where you can get to work during your first day at the club.

Club Vision has been added to the board confidence module as well, which itself has been revamped to become ‘Performance’ for FM20. Visions form part of a report card that is both in the monthly performance update that is delivered to your inbox and on the Performance overview, which is visible at any time on the Board sidebar section.

Each area of Performance is now graded from A+ to F (these grades are also localised for each territory) giving you a clear idea of how you’re performing in each area and which areas you need to focus on improving. You’ll be given an overall grade with your notable recent highlights and criticisms laid out.

The overhaul to board mechanics in FM20 is the most wide-ranging in the history of the series. Lots of aspects have been completely overhauled or revamped to make them more engaging and to contain more graphical information.

The biggest change of all is the addition of Club Vision. Alongside the Development Centre and the new Playing Time Pathway, Club Vision represents a new way to get the most out of long-term saves.

Club Vision not only changes the way that you’ll manage your club but strengthens each club’s unique identity within the game. You’ll face new challenges during every save and at every club you manage on the way, adapting your style and approach throughout your career.
About author