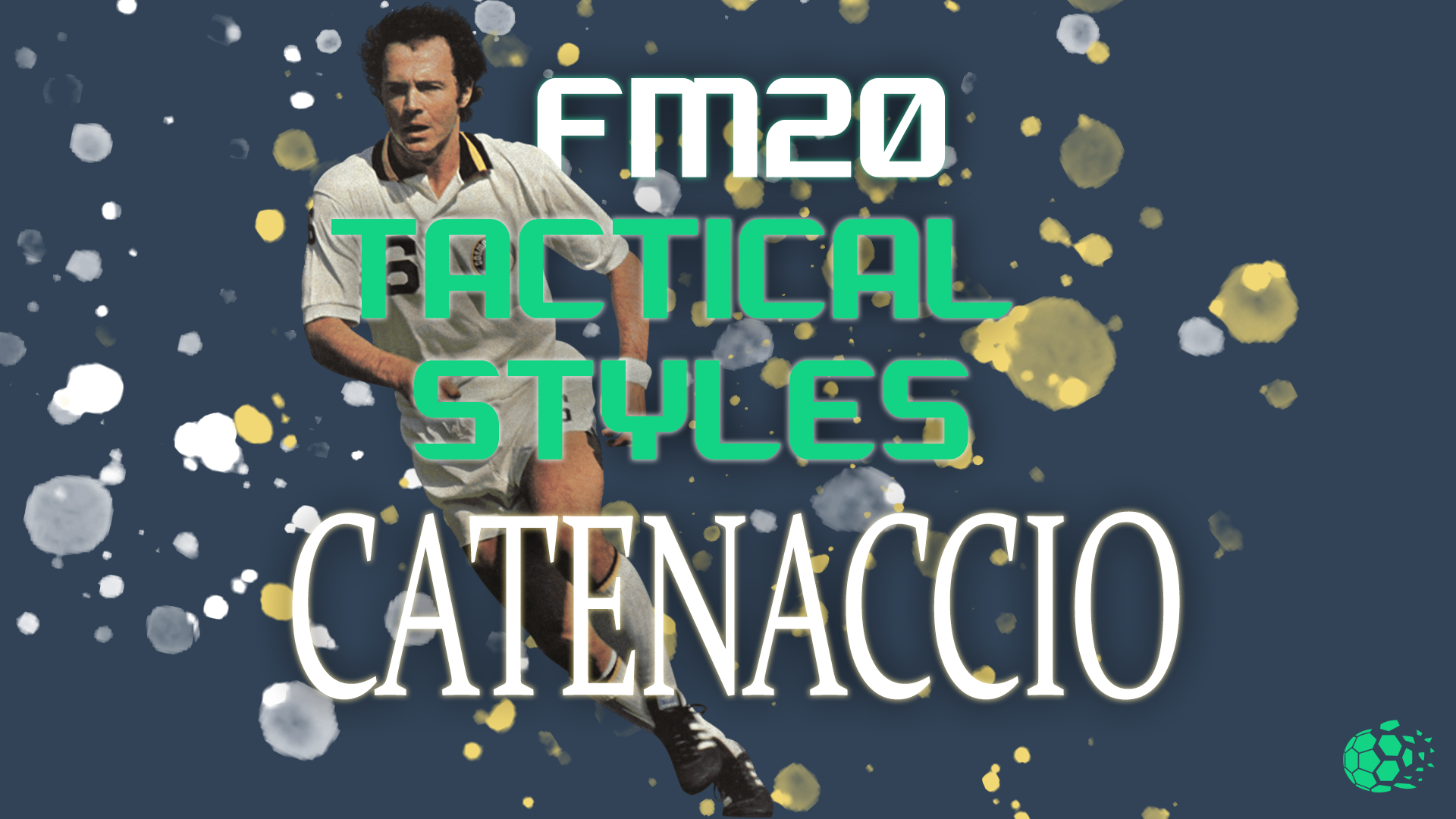 In this article, we will analyse Catenaccio, a style which originated in Switzerland in the 1930s, and can be said to mark the birth of tactically using four defenders at the back, to counter the pressure of the opposition’s wingers. Even though ‘Catenaccio’ is an Italian word, this style of football is not of the Italian origin, rather it was first adopted by an Austrian coach Karl Rappan and its origin can be traced back to 1930-40′s when he was coaching Switzerland.

Be sure to check out our other tactical styles articles by clicking below
When discussing this tactic, it’s impossible to not dwell upon the man it’s most strongly and repeatedly attributed to, Helenio Herrera. ‘Catenaccio’ literally means door-bolt or lockdown, depending upon lingual interpretation. The implication doesn’t change though. Unanimously considered to be the most effective and innovative defensive strategy ever-devised, it was immortalised by Herrera’s Internazionale of the 1960s.

Many consider Catenaccio to be solely a defensive tactic, but there’s more to it than that. The history of the style comes from Karl Rappan's 3-2-5 which became known as the WM Formation. The WM Formation consisted of three defenders, one of which would join the midfield to help regain possession of the ball. 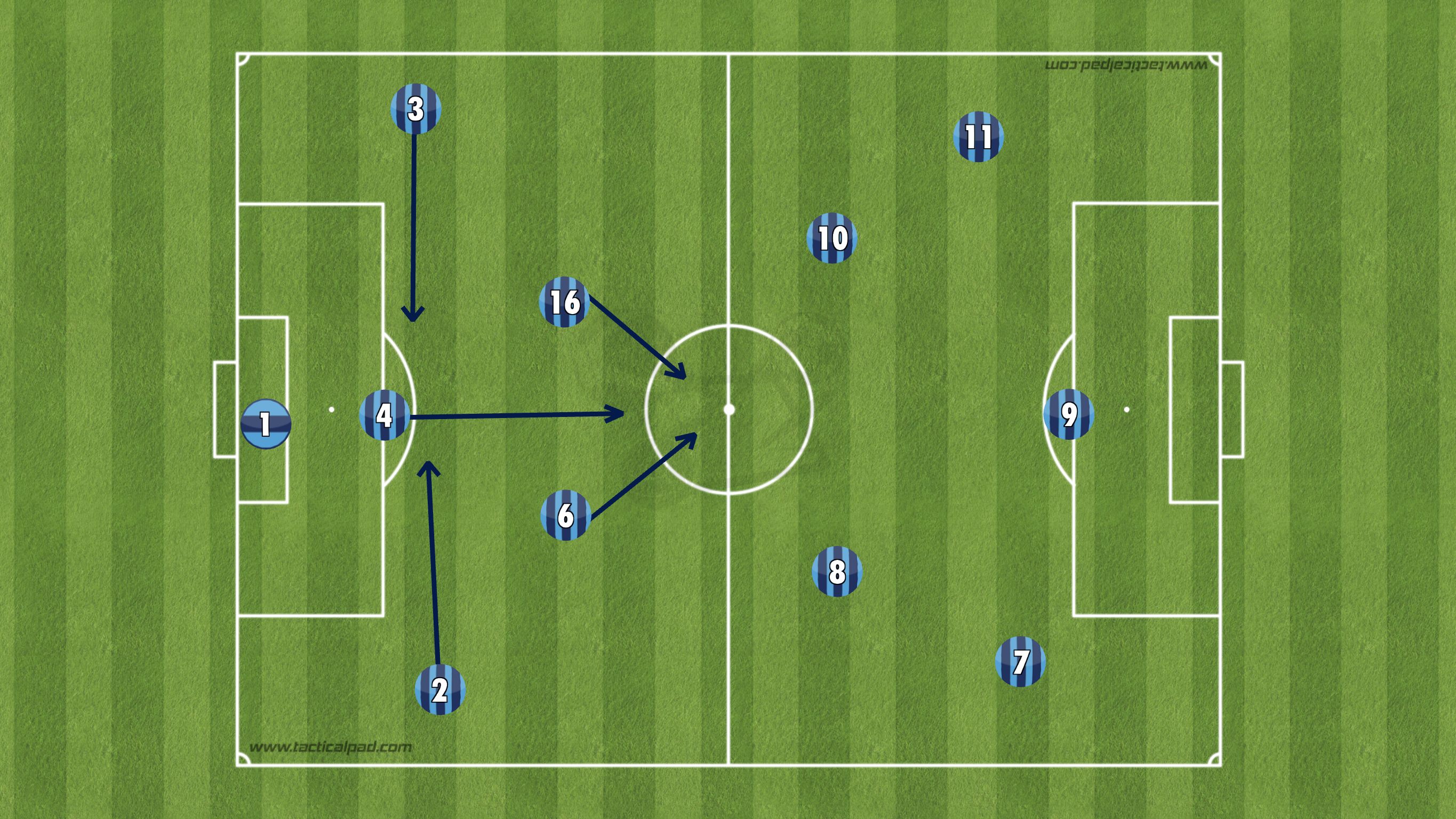 WM Formation​
The WM formation was susceptible to fast counter-attacks against teams with technical and fast players and midfielder who could pick long passes. With this being the case, Rappan adopted the tactic to include a role called ‘verrouilleur’ which roughly translates to 'lock'. The role was an adaptable role that consisted of one player man-marking forwards thus forming a double-team with other defenders or the player would sweep behind the defence to prevent attackers from running through on goal. As you've probably guessed, this role became known as the Sweeper. 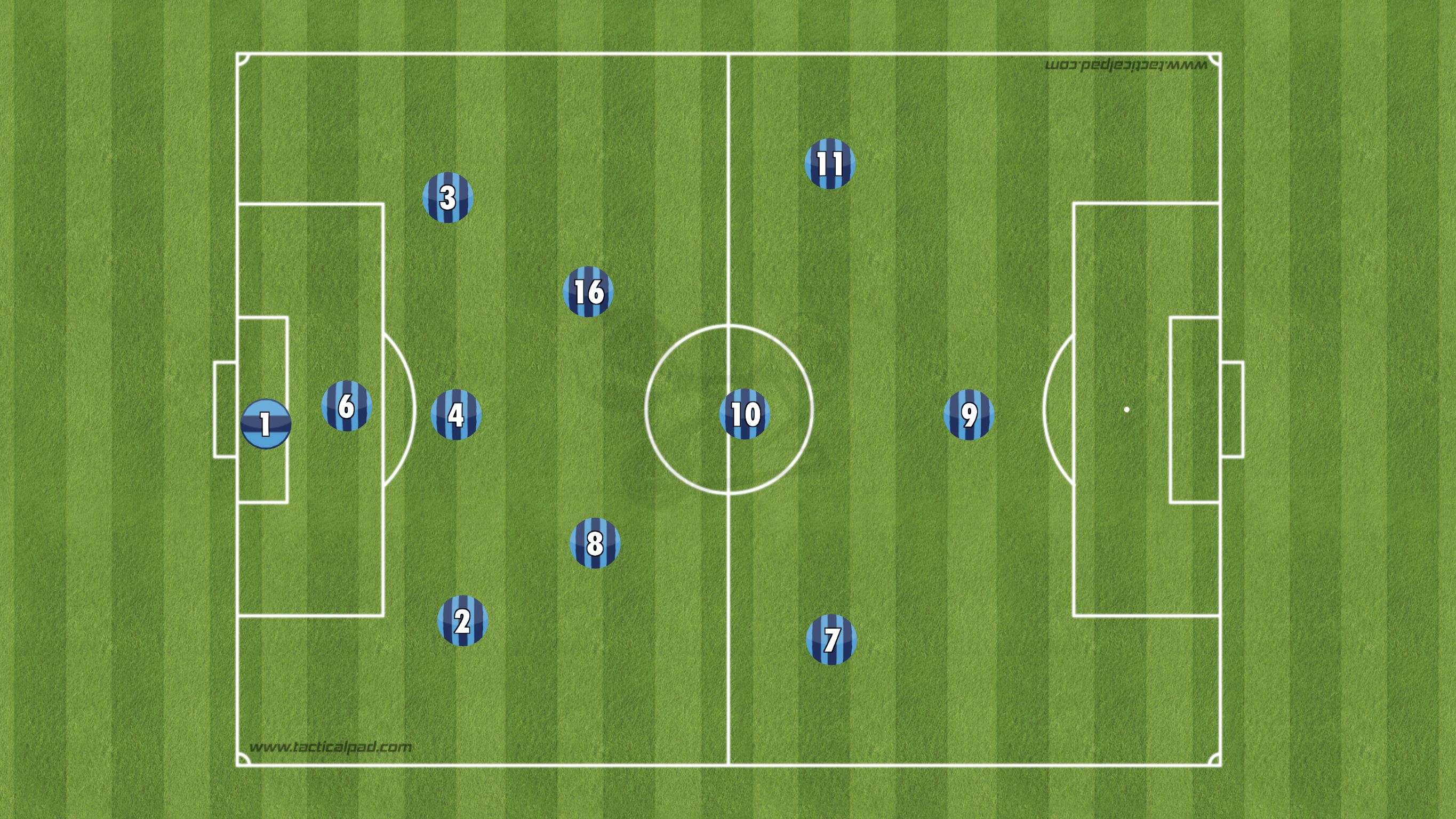 Verrouilleur shown behind the three defenders
​
Helenio Herrera comes into the topic with his adaptation following a run of bad defeats with his Inter Milan team. Herrera turned Armando Picchi into what became known as the libero by setting up his team in what could be loosely listed at a 5-3-2. Herrera’s team was built on the principles of a team effort and strong work ethic. In attack, the full-back would push high and the central midfielders would cover the wider central areas. 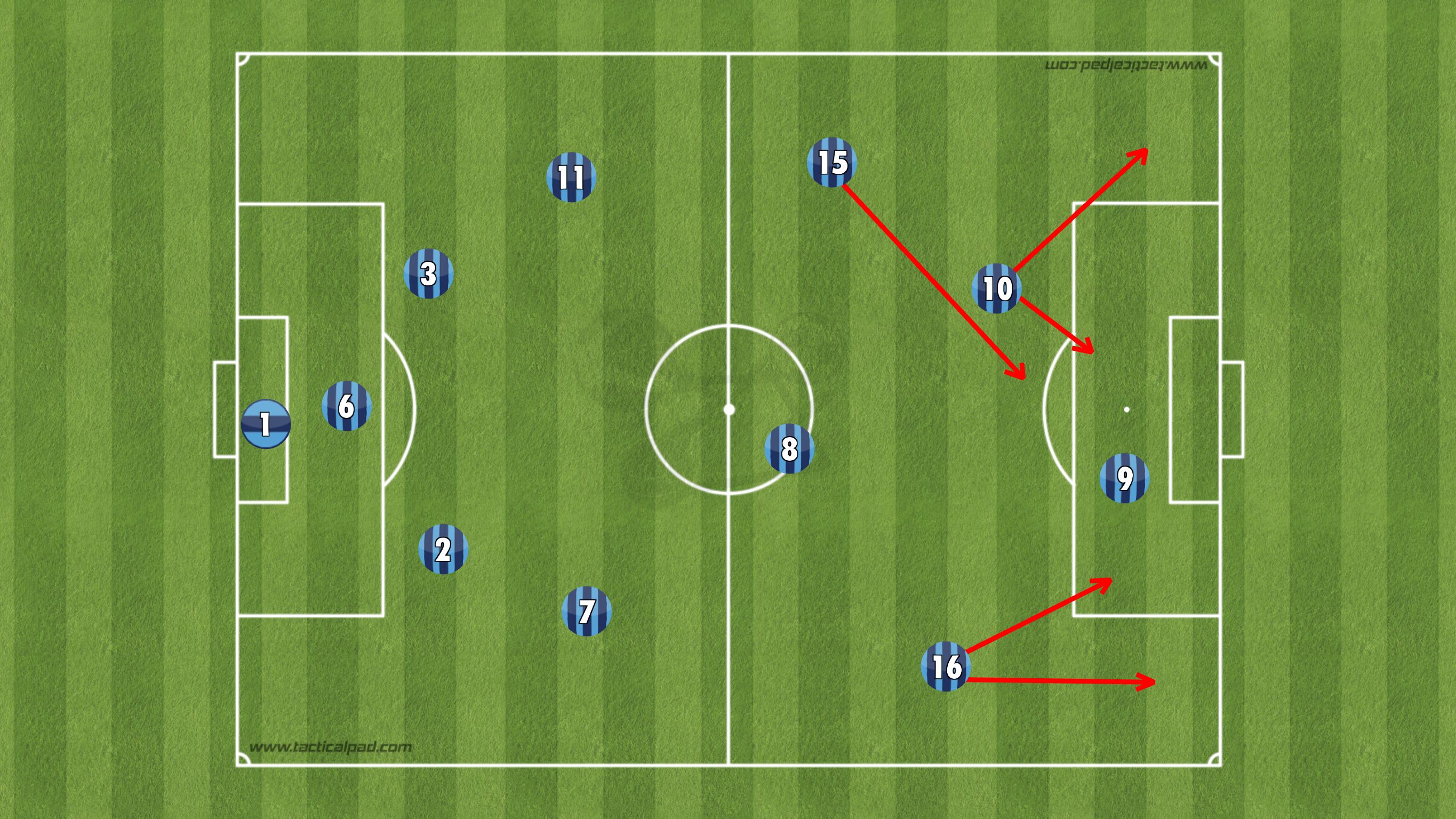 5-3-2 attacking shape
​
When defending, the majority of players would work back into defensive positions which some would depict as parking the bus, however, this wasn't the case. Herrera's men did not sacrifice tactical fluidity. The libero offered the extra support but would create counter-attacking opportunities with long passes to players waiting in attacking positions. 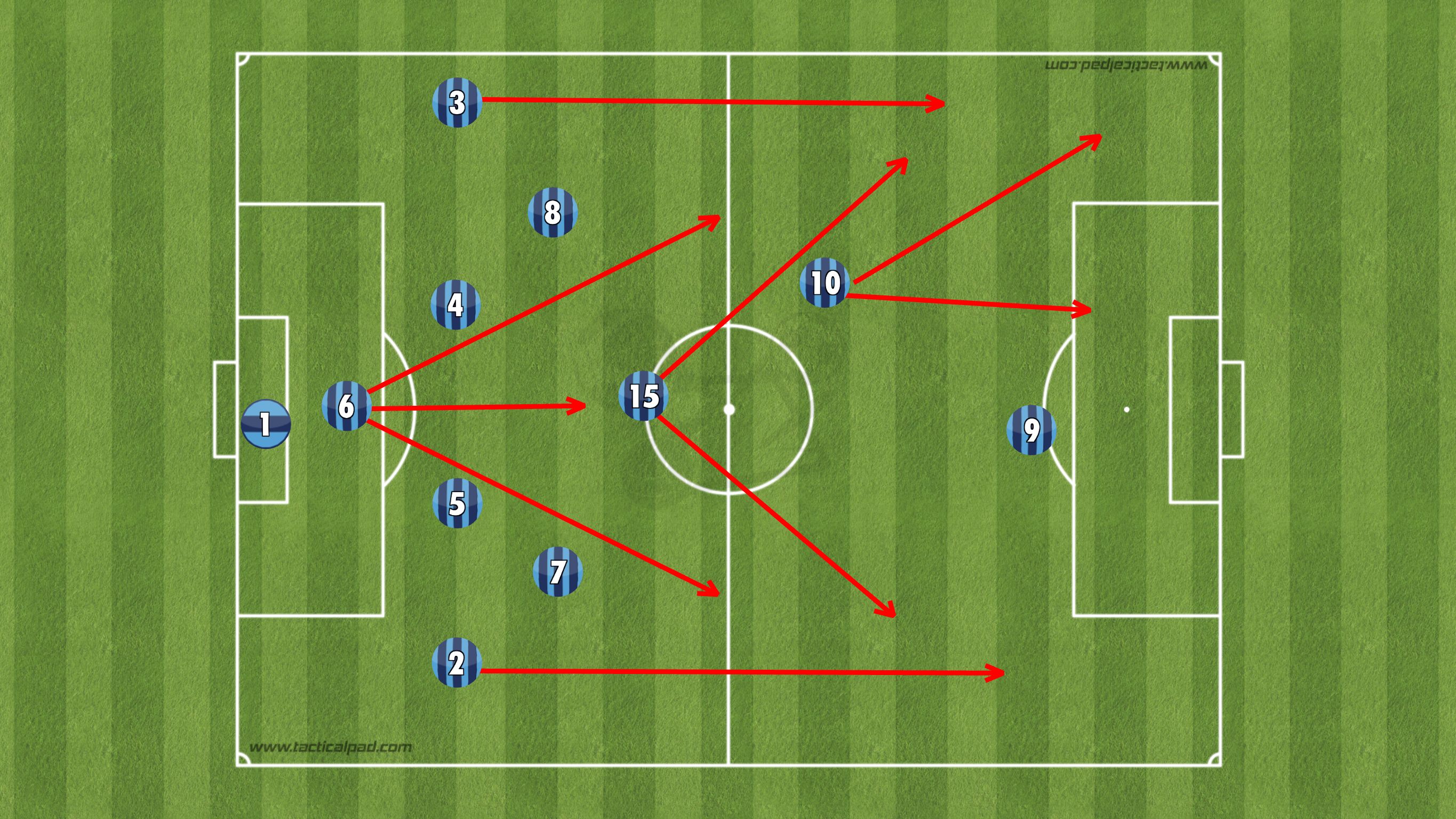 HOW DOES FOOTBALL MANAGER DEFINE CATENACCIO?

“A defence-focused style that primarily looks to deny the opposition goalscoring opportunities. A Libero is a traditionally deployed to offer cover behind the defensive line.”
Click to expand...

So what the heck is a Libero? Football Manager tells us the following…

“The Libero drops behind the defensive line, aiming to sweep up through balls, pick up extra attackers and make goal-saving tackles, blocks and interceptions. His exceptional athleticism and reading of the game enables him to cover for defensive errors, take possession of loose balls from a deep position and secure possession. However, he will also roam forwards in support of the midfield when the team has possession.”
Click to expand...

Catenaccio as a strategy was effectively designed to soak up opposition pressure while freeing up a spare man, or ‘bolt.’ Helenio Herrera’s Inter team in the 1960s (the gentleman in the image at the top of this article) were key proponents of the tactic, and its name was born. Man marking is a key requirement, as is the ability for players to look for longer passes to attack, on the counter.

HOW DOES IT WORK? As above, the tactic looks to tightly man-mark players, and nullify opposition attackers. All except the Libero, who is left as a spare man, roaming the defensive areas sweeping up loose balls and sometimes assisting the centre backs with double-marking. In possession of the ball, however, the Libero can push as far forward as the central midfield, looking for opportunities to counter-attack. This requires players who are disciplined, hard-working and physically strong. It also requires patient attackers, who will press and roam, while anticipating a long ball over the top to run onto as part of a counter.

Franz Beckenbauer. Arguably the most well-known Libero of all.​
Franz Beckenbauer and Lothar Matthäus are perfect examples of such sweepers. The role of the sweeper is the most vital in this strategy. He will nullify the forwards, pick up loose balls in his own half to initiate the attack and will also sweep throughout the centre of the pitch, typically what full-backs do on the wings.

People often consider parking the bus strategy to be identical to that of Catenaccio. However, there are differences between these two styles of play. First and foremost, the distinction between the use of a sweeper who not only acts as a defensive player but also helps in organizing attacks from the back.

In short, it could be said that the underlying philosophy behind such a strategy is “for the opponent to win, they have to score goals”.

This is how Football Manager presents Catenaccio…

5-4-1 WB Wide
​
As you can see from the shapes above, powerful and committed defenders are a must in a Catenaccio system but don’t rule out that two or three-man attack, who can bite on the counter. Many mistakenly use the term “Catenaccio” to describe any defensive tactic, and even compare it to “parking the bus.” This strategy represents more positive ambition on the pitch, despite its key focus being preventing goals, rather than scoring them. Freeing up a roaming defensive player is an innovative concept and one that can work again in today’s football, given the right players, in the right setup.

Although it had it’s heyday in the 1960s with Herrera’s Inter, and memorably at the 1974 World Cup with Beckenbauer for Germany, the ‘door-bolt,’ can still be a highly effective system if implemented correctly today.

Sweepers, or rather Liberos, are not seen as fashionable roles in the modern game, as Tiki-Taka or the Gegenpress currently reigns supreme. There are currently very few players around who are all-action central defenders capable of playing in this specialised role. Given the roaming attacking element of the responsibilities, personally I think that a successfully retrained classic box-to-box midfielder may revel in this sweeping role, working from nearer his own goal than he is used to. Naturally, Catenaccio is best deployed against strong opponents who you expect to have to solidly defend against. Sat somewhere on the attacking scale between parking the bus and the quick-reacting counter-attack, it takes a patient and skilled manager to get the best out of this system. In the right hands, however, I can envisage a resolute yet intelligent defensive success.

Laurent Blanc. Arguably the last great sweeper in modern football.
Although players like Alessandro Nesta and more recently Sergio Ramos, have at times been deployed in the role.
​
Site Referrals Catenaccio as a football tactic was made famous Helenio Herrera,the Inter coach in the 1960s. This guide is useful for fm 16 and tactics enthusiasts in general
www.thefalse9.com The beauty of 'Catenaccio' style of Football

The beauty of 'Catenaccio' style of Football