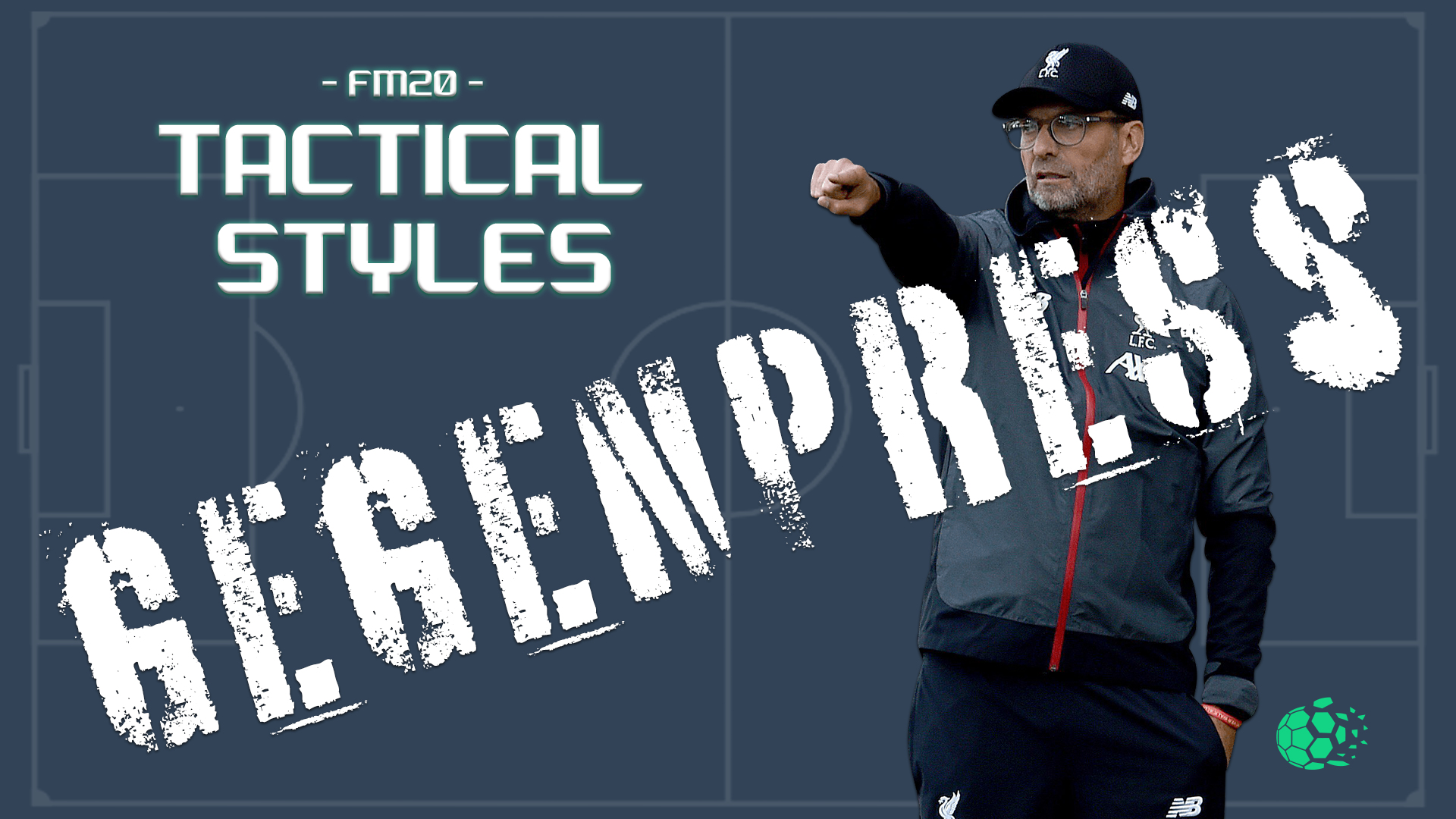 Football Manager 2020 comes with it a set of pre-set tactical styles. These tactical styles were first introduced in FM19 and they support both the tactical novice as well as the tactical veterans out there. In this article, we'll go through Gegenpress possibly famous for being used by Jürgen Klopp at both Borussia Dortmund and most recently, Liverpool.

How does Football Manager define Gegenpress?

"Gegenpressing relies on every player in the team working hard and, above all else, being fit and mobile enough to press the opposition immediately after losing the ball"
Click to expand...

Gegenpressing is, in its core, a very simple and understandable concept. After losing the ball, the team using Gegenpressing tries to press against the ball to prevent an oppositional counter and – instead of transition into the ordinary defensive organisation, whatever it may be with the aim of getting the ball back as soon as possible and transition from defending to attacking. 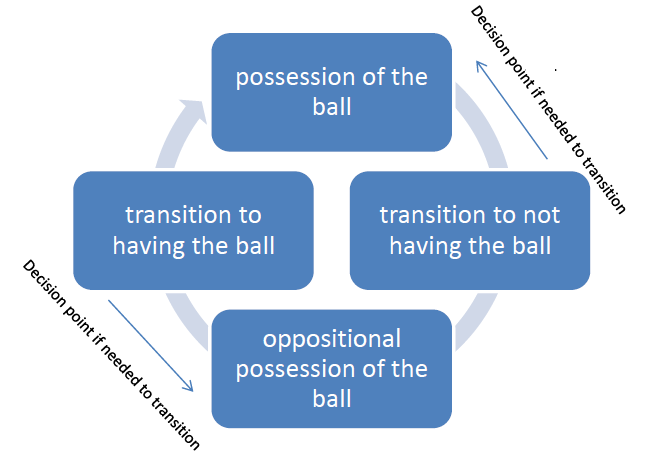 It is difficult to determine exactly when a systematic approach to pressing first originated, but it’s safe to say that the Dutch national team, managed by Rinus Michels utilised a rough approximation of the technique during the 1974 World Cup. The fundamental features of a high-pressing system were all there to be seen: swarming defenders, hard tackles, and a frustrated opponent resorting to long balls or forced into poor passes. 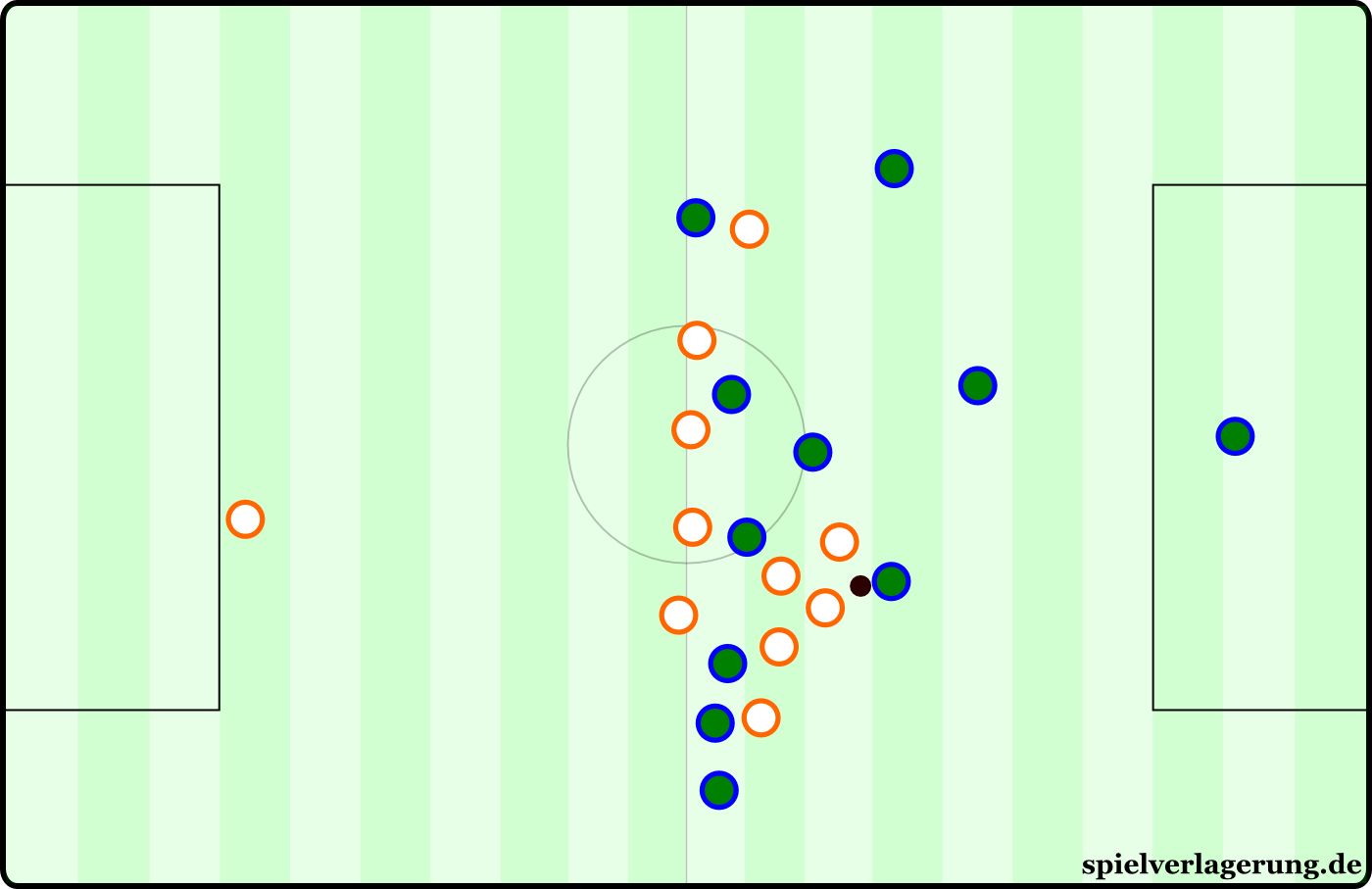 Gegenpressing of the Dutch National Team in 1974​
Arrigo Sacchi, a legendary manager adapted the methods used by Rinus Michael for his Milan teams of the 1980s and 1990s. Sacchi's team aimed to regain possession higher up the pitch, with the target of getting the ball back in the oppositions half. The thought behind this was it would lead to more goals. Sacchi player instructions in terms of defensive positional play partnered with high defensive line guided modern managers towards the modern era of Gegenpress.

This masterstroke by Sacchi, paved the path for the modern era in terms of tactical pressing as shown in the images below credit to Rene Maric from The Tactical Room and RM at Spielverlagerung 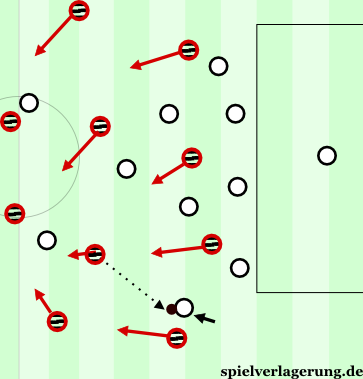 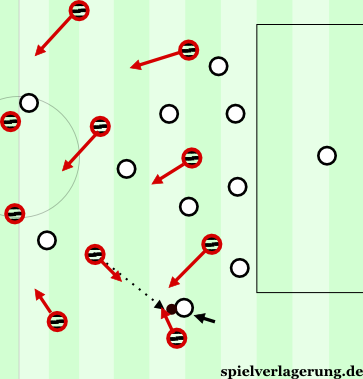 Sacchi’s team pressed near the ball, players further away from the ball dropped diagonally towards the ball and towards the back.
Goal: Stop or prolong the oppositional counter while creating the own defensive shape in the first two lines 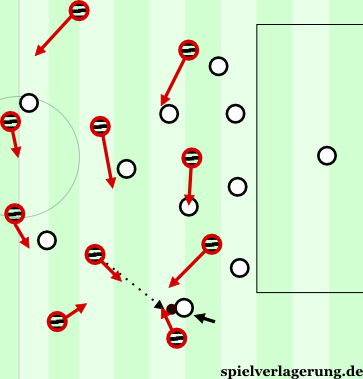 Sacchi’s team collectively pressed with all players and attacks towards the ball.
Goal: Stop the counter, win the ball, attack again by yourself!​
Gegenpress - The Modern Approach

The pressing methods of Gegenpress are most notably used by current Liverpool manager, Jürgen Klopp and Manchester City manager, Pep Guardiola. Pep's synonymous tiki-taka tactical style uses high pressing when his team are not in possession of the ball. Guardiola's style of play focuses on ball retention in order to preserve the attacking shape. When his team lose possession of the ball, Pep’s men utilise both collective positioning further up the pitch and high pressure in order to regain the ball as quickly as possible.

Looking at the tactical approaches by most modern managers, most utilise high-pressure defending as a means to an end to regain possession. Klopp removed the middle man and adapted an approach that saw counter-pressing as an actual part of his team's attack.

Klopp usually deploys a 4-2-3-1 with width provided by the full-backs. When defending, a high backline effectively packs the midfield which allows players to hunt the ball in "pressing packs". This makes passing through the central area of the pitch difficult for opponents. All of this is done at a high intensity with the aim of regaining possession of the ball.

“The best moment to win the ball is immediately after your team just lost it. The opponent is still looking for orientation where to pass the ball. He will have taken his eyes off the game to make his tackle or interception and he will have expended energy. Both make him vulnerable.”
Click to expand...

Essentially, Gegenpress operates on the basic assumption that a team that has just lost possession (especially while attempting to counter) is in its most vulnerable state. The more rapidly you exploit that vulnerability, the more likely you are to score. 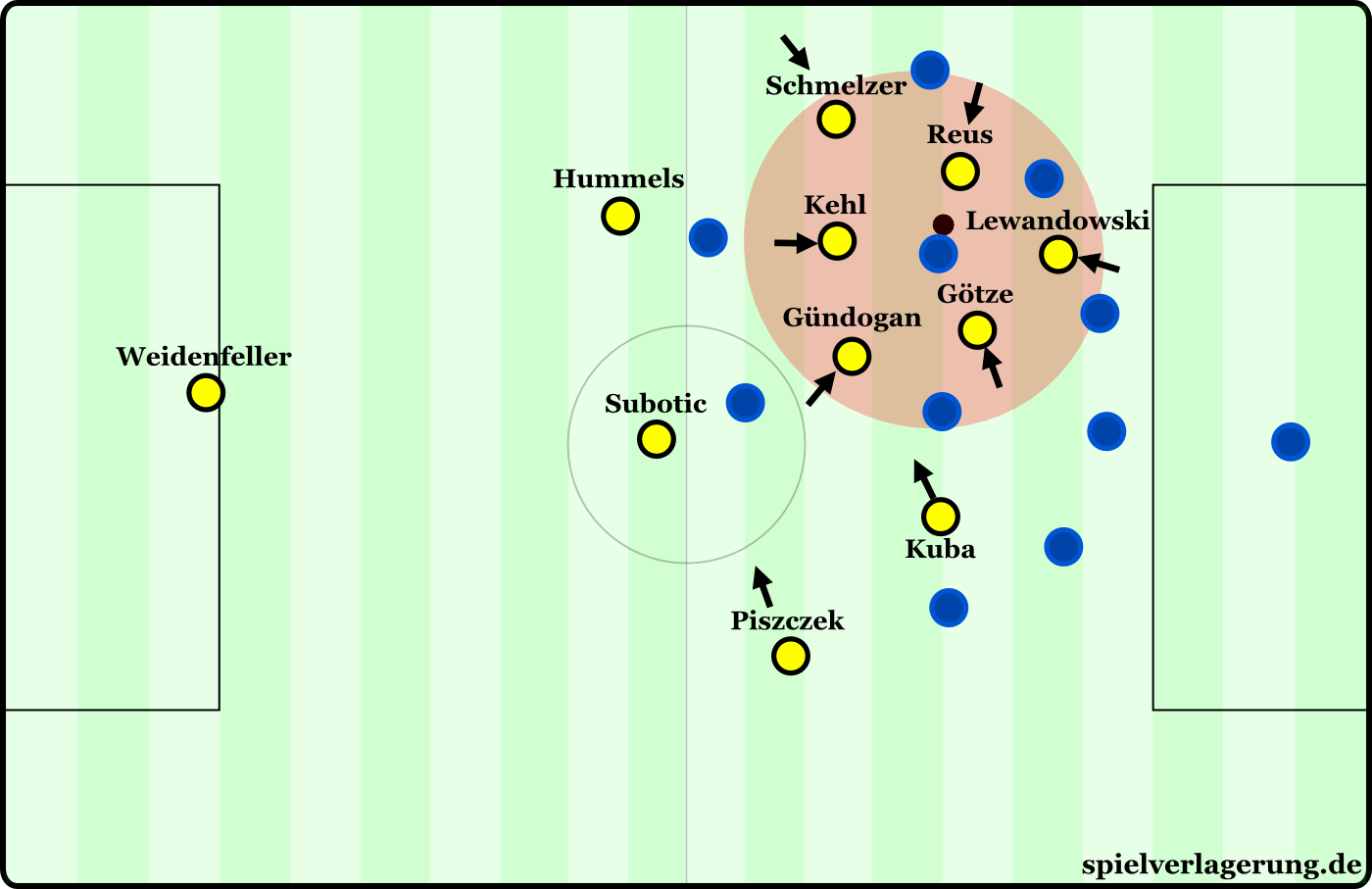 ​
On Football Manager, the recommended tactics for Gegenpress are: 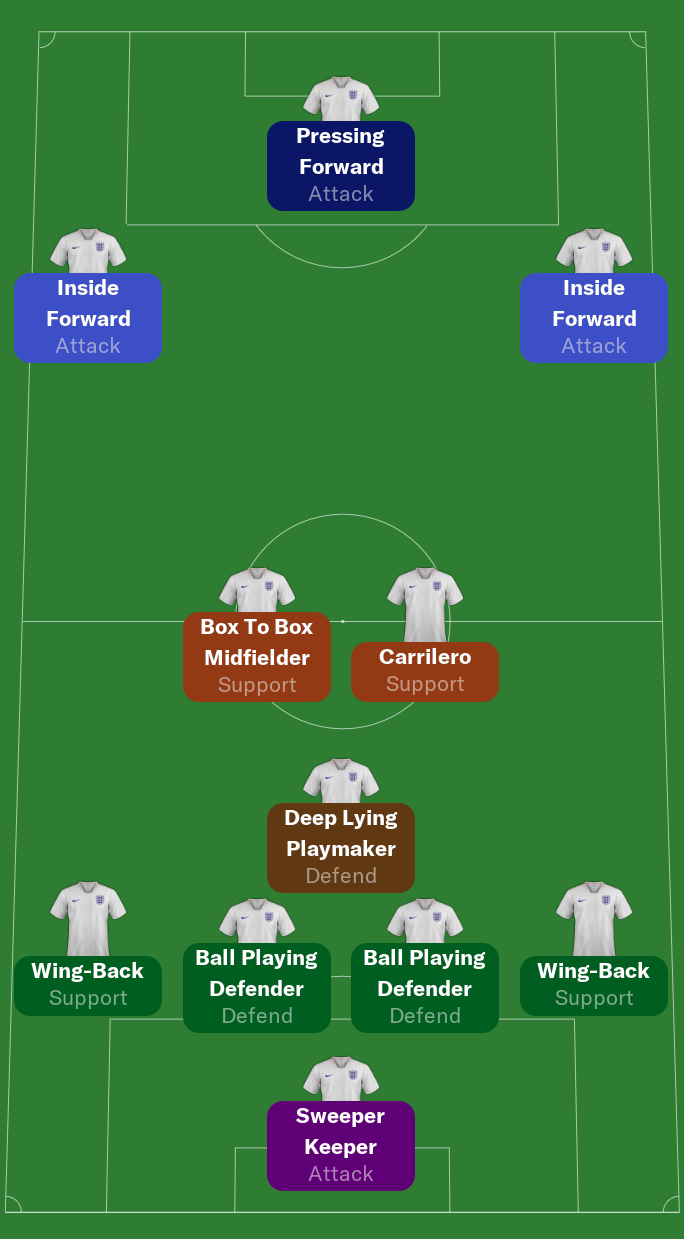 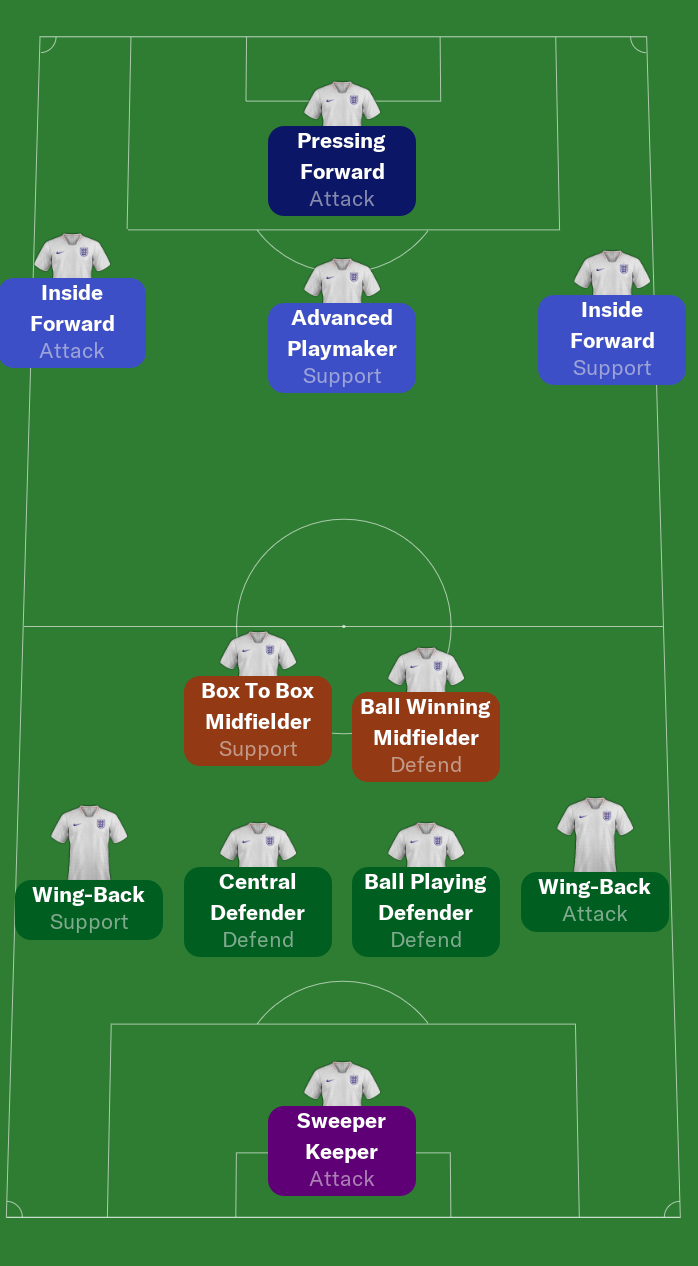 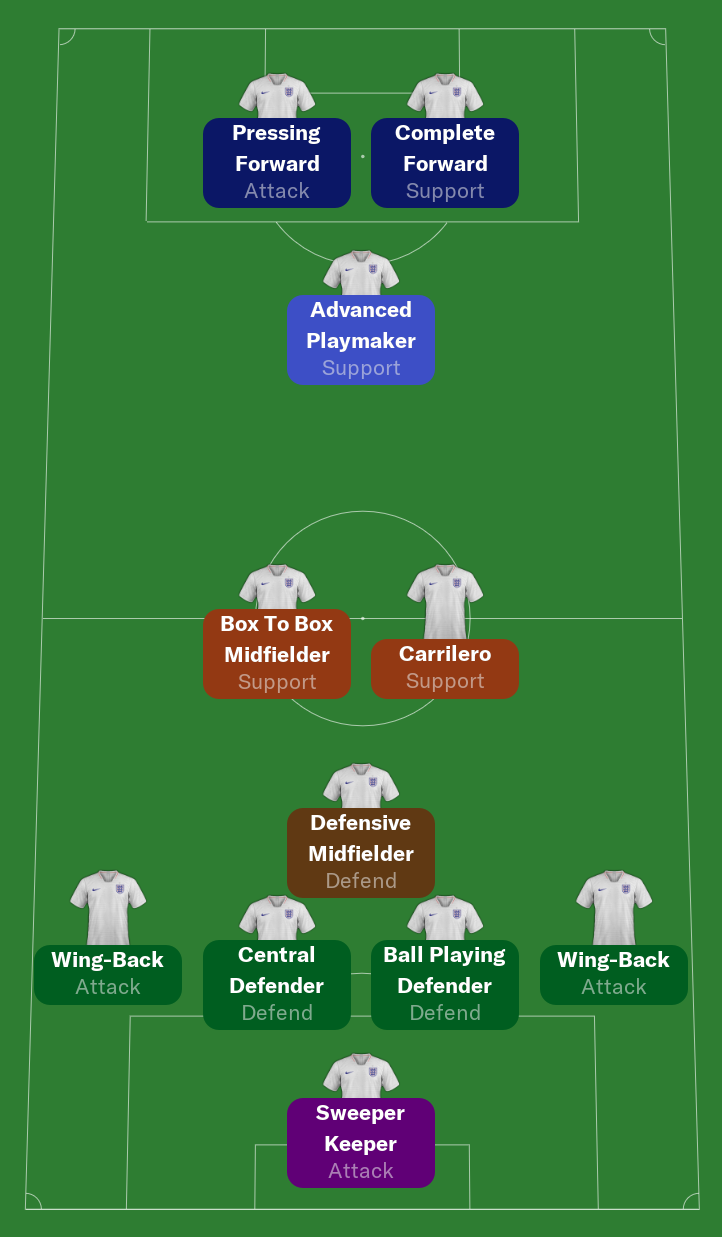 ​
Each player in a Gegenpress tactical setup must be capable of reading the game, understanding their specific role in any given situation, and adapting quickly in order to keep an opponent firmly under pressure. In so doing, Gegenpress teams effectively nullify the threat of counter-attacks that could wreak havoc against teams that rely on a more traditional defensive approach. To make Gegenpress work, on Football Manager, make sure your entire team has good anticipation, natural fitness, stamina and work rate because your team is going to be buzzing around constantly looking for their moment. Players must be capable of rapidly closing down space and hassling an opponent in an intentional manner without committing the sin of fouling or the sin of diving in and leaving your teammates exposed. This also means you need to be ruthless and sub out anyone that's looking a little tired for a pair of fresh legs. Gegenpress requires incredible discipline and considerable training in order to be pulled off successfully. However, when it does happen, it’s a thing of beauty that can’t be easily contained.

Don't use Gegenpress if you have slower-paced more physical players as they will be left behind with this set-up due to the intensity. The slower less physical players won't press effectively which will leave gaps. As soon as there's a ***** in the armour Gegenpress does not work effectively. If one player doesn’t do their job, the entire structure can collapse. It doesn’t do any good to apply high pressure to nine outfield players if the tenth is wide open for an easy outlet pass. Weak spots can and will be taken advantage of by long balls, which can pull you apart and see plenty of goals being conceded.

This article will receive an update. Here at FM Base, we're always looking for ways to make our content better. In future tactical articles, we'll be aiming to incorporate the use of TacticalPad to add animated visuals to our articles.

In the animated clip below, we've tried to demonstrate the high pressing involved in Gegenpress. You'll be able to see the quick transition from defending high up the pitch, to regaining possession of the ball and turning it into a goal-scoring opportunity by swamping the central areas allowing for the ball to go wide which allowed the striker to find more space in the box.

Counter- or Gegenpressing is, in its core, a very simple and understandable concept. It just means that the team immediately after losing the ball tries to

What Is the Gegenpress and How Does It Work? 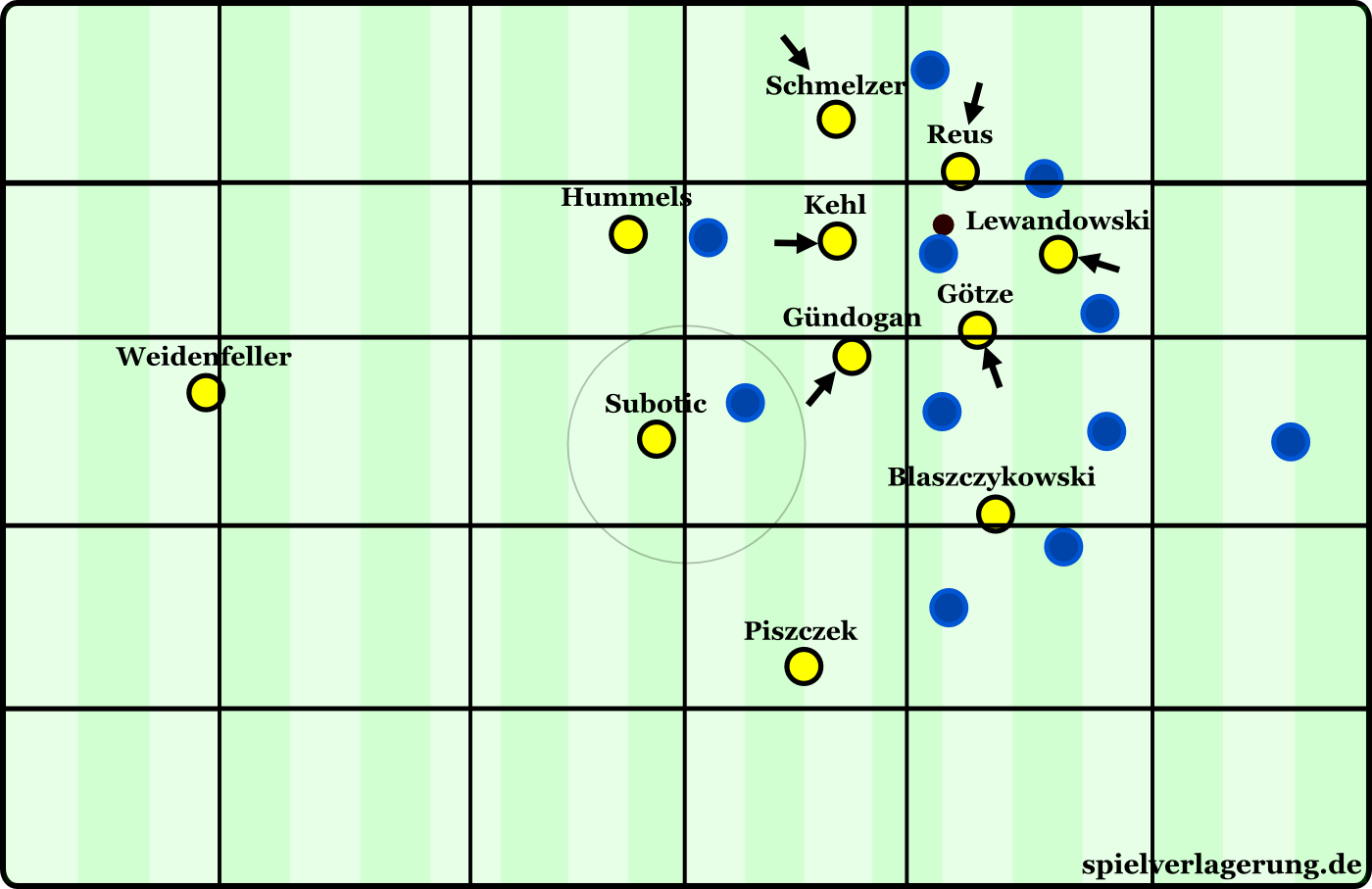 Gegenpressing has been a buzzword in football tactics for the last five years and has garnered more and more attention in the media recently. Because of the success of FC Barcelona and Borussia Dortmund, gegen- or counterpressing has been brought up as one of the main reasons for their titles...