FM20 Football Manager: The Wonderkids That Never Were 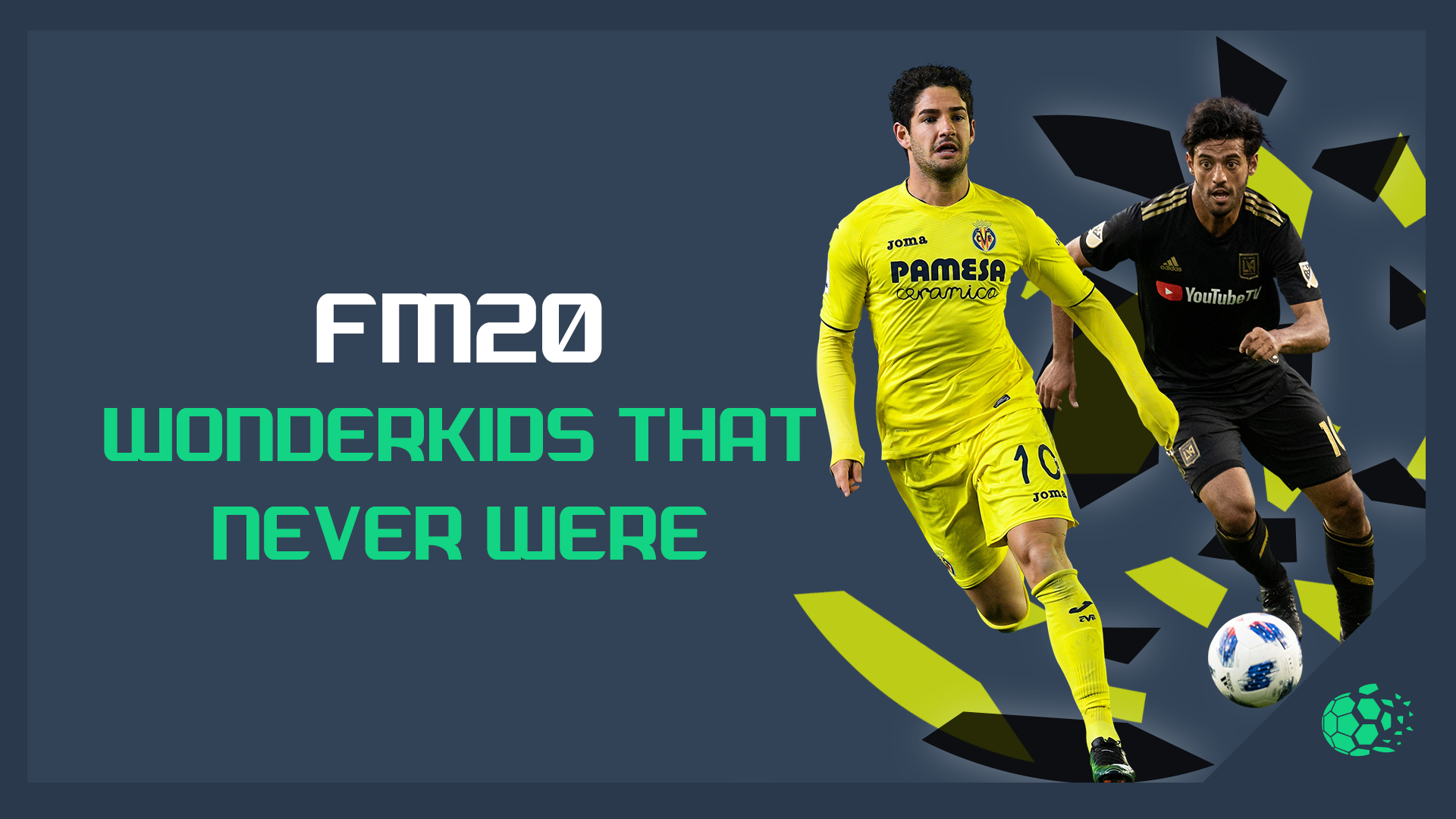 Although Sports Interactive does a great job with the database every year in Football Manager, no one can predict the future in terms of a players development. Every one of us who have played the game down the years has a hidden gem or two that came from nowhere before going absolutely nowhere in real life. In this post, we will run through some of our favourite wonderkids who never quite made it from the last decade of Football Manager games!

An absolute beast! Great all-round attributes for a striker and only 19 years old! Can't really say more apart from good on you if you manage to prise him away from Arsenal as you were pretty much guaranteed to be picking up one of the better strikers in the game.


In the real world, Vela has turned into a striker almost scoring a goal per game.......ten years later.......in the MLS. Ok it's not quite panned out exactly as FM09 might have suggested but this is still an impressive record. It's just a shame about the 8 seasons before he moved to LAFC where he averaged a goal every 4 games or so. Not exactly prolific.

If you manage him in FM20 you will have on your hands a solid goalscorer who retained his impressive first touch and dribbling ability. The £93k p/w wage is a little eye-watering for a player of his ability

For a long time one of the more impressive young players to come from Brazil in the series. Very creative and technically gifted he starts as a top-class 18-year-old who has just moved to AC Milan.

Initially, his move to Milan seemed to put him on the path to greatness as he flourished on the wing of a 4-3-3 formation winning the Serie A player of the season in 2009 and finishing as Milan's top scorer. Sadly this proved to be the high point for him as in 2011 he suffered three serious hamstring injuries in the space of a year only to recover and then suffer a series of other minor injuries to devastate the second half of his Milan career. He returned to Brazil in 2013 where he had some success and remained injury-free and even had a brief (bun unsuccessful) loan spell at Chelsea in 2016. He got one last big-money move to China as his old teammate Gattuso brought him to Tinajin where he scored almost a goal per game. In 2019 he returned to Brazil for Sao Paulo. Such a shame that a clearly gifted and talented player had a promising career hampered by injuries.

If you want to sign Pato in FM19 you'll have to find a way of getting him away from China at the games start although his contract is due to expire on New Year's eve 2019. Oddly, his attributes are practically the same as they were back in FM09 as he remains a creative force as high a premiership level....if you want to gamble on his injury record.

By no means a top wonderkid on FM but I have a massive soft spot for him. In some of my earliest adventures on FM I always made sure to sign him for Sheffield United where he would tear up the Championship and mid-table Premiership sides. Just thinking about it is making me want to give this game a go again to be honest!


He enjoyed spells at Austria Wein, Monaco and Utrecht before moving to the Turkish League in 2017 for two seasons. He then embarked on something of a world tour as his next club were Al-Jazeera in the UAE before moving to Thai club Buriram United this season. A far cry from the success he enjoyed under me back in the 2000's but He can probably still do a job at Championship level in-game. He's a good all-round midfielder with a slight strength in attacking passing and dribbling. Despite playing in Thailand he is still valued at £3.8 million so maybe a bit pricey for a player of his ability.

One of only 6 players to possess the coveted -10 for PA in FM2010 he is the youngest player ever to play in the Mexican professional leagues at only 14 years and 325 days of age. Determined and with a fantastic work ethic which combined well with great (for a 16-year-old) technical attributes he could take on the world if allowed to develop and could be available for as little as £1.7 million. Bargain.

Perhaps suffering from what I will dub 'The Freddie Adu effect' his career never really got going. After making his debut at such a young age by the time he was 21 he had only gone on to make 2 more league appearances for Cruz Azul. Several loan spells also failed to kick start his career until he eventually moved to Reynosa in Mexico where he had a pretty impressive year netting 10 goals in 28 appearances. In 2017 he moved to Salamanca in Spain where he still plays today. At the age of 26, he has managed a mere 100 appearances and 24 goals for all teams and a handful of appearances for Mexico's U17 and U20 sides.

His mediocre career so far is reinforced by his very average abilities in FM19. As a striker, he has a finishing attribute of only 11 with poor composure to go with it. The only aspect of his attributes that has significantly improved is his pace and fitness as the 16-year-old version of him is a much more gifted player!

Aaaah Torric. I'm not sure how I originally found you but I'm glad I did. Despite his rather innocuous starting attributes, he developed into a complete monster by the time he hit his mid 20's. Throw into the mix that he had a very low starting value he was available to many teams in the game. His actual career didn't quite pan out the same way.

After playing in his native Ghana for three seasons he finally sealed a dream move to Bucaspor in Turkey. He played a single season there before he terminated his contract without any warning and moved to league rivals Trabzonspor. This triggered outrage with Bucaspor (understandably so) however the move backfired as he struggled for fitness and game time before being sent out on loan to a lower league club. Bizarrely, he then moved back to Bucaspor for a season before being released and spending five seasons in Egypt (three of them at Ismaly) and he now plays for TP Mazembe in DR Congo. At only 27 he is still yet to be capped at international level. Worlds away from his career path in FM!

With his career going rapidly downhill he is understandably not in the latest instalment of FM unless some committed soul has created a DR Congo league system somewhere?

Georgian football's greatest prospect with a -9 potential on FM12 he led my Sheffield United side in this game onto amazing things as he was a creative force who was also very capable of bagging from long range too. He was a great player in-game and has carved out a steady career at Spartak Moscow as he remains a one-club man into his late 20's. He has been blighted with knee and ankle injuries over the years which has seriously limited his ability to thrive at the very top of the game.

These injury problems are reflected by his lack of growth over 7 years as he is still a fairly good flair player but there is little in the way of improvement in any aspect of his game.

He was potentially one of the best midfielders in the game with a PA equal to that of Paul Pogba. Very little information exists about him and his starting attributes aren't great. Sure he can run forever and work hard but it's hardly outstanding and its probably not even top-flight material on first glance but with such a high PA it would be worth the effort to develop him.

Robbie doesn't even have a Wikipedia page at the time of writing as his top-flight career never came close to taking off. He was released by Blackburn in 2014 and went to play for Sheffield FC for one season before moving onto Goole Town. This seems a totally baffling part of the database, to be honest. Not surprisingly he is no longer on the default FM database.

Probably reaching his peak by FM13, Ganso was a top wonderkid for years in FM. A phenomenal creative player who even had some room for improvement at 22! If you could afford him you just had to sign him.

His career in real life never took off in the same way however as consistent injuries limited his impact on the global game. He was a Seville player until the end of last season where he returned to Brazil to play for Fluminense. He was controversially not selected for the 2010 World Cup by Dunga but did pick up a silver medal in the 2012 Olympics. At 29 it seems unlikely he will make much of an impact in the European game.

In a similar way to Pato, Ganso's overall ability has changed little over the years as he has remained a good flair player in the middle of the park who can probably do a job in the Premiership.

Astounding base attributes for a 19-year-old striker. He was fast, pacey and composed giving him the ability to score goals for fun wherever he ended up.

A career record of 58 goals in 166 appearances at club level and 2 goals in 12 international caps is by no means bad in any strikers books but these aren't quite at the level FM would have predicted as he ended up playing his best football at Dinamo Zagreb (after some loan spells). He returned to South American football in 2018 where he has established himself as a reliable goal scorer.

If you want to sign him he's valued at under £1 million and you'll get a hard-working player in his mid-20's who is a solid finisher. Can probably do a job in the Championship.

Could develop into Steve Gerrard's replacement in the right hands as he started the game as a mentally tough 16-year-old. In reality, he started off brightly by becoming Liverpool's second-youngest goalscorer before minor injuries and a lack of game time hampered his development. Joined Rangers in 2016 and had loan spells at Bury and Fleetwood as well as getting some game time at Rangers. He is still only 22 so has time on his side to kick on in the sport.

The youngest player on this list and the one who has probably gone through the biggest improvement of anyone and yet he still falls short of his lofty potential. He has gone through significant mental and physical attribute improvement (though his work rate has dropped) and can be developed into a Premier League standard midfielder. If you can keep hold of him at Rangers he could help you push past Celtic in the domestic game.

This content has been produced in association with our partners: Super Betting Sites. Here's a huge thanks to superbettingsites.com for their input with the best wonderkids on Football Manager that never quite took it to the next level.​
About author