Of course, the disadvantages of such a position are obvious no matter how you look at it, that is, the flank obviously has to bear a lot of defensive pressure, and the attack needs strong offensive ability, so the importance of full back will be infinitely amplified, but don't panic. I never eat Ca in tactics. The strong and weak are universal. As long as I can play full back, I can go up. Of course, the more I go to the back, the better, the better. The stronger, the more stable! The central defender, because of the lack of the back waist and the delayed catcher in the midfield, has shouldered the responsibility of the ball. The adjustment of this generation of Si obviously intends to make the guard hold the ball more frequently, and has a new way of performance such as holding the ball, pushing and pulling the side.
In the midfield, I have tried many positions in this generation. The choice of 3 midfield. When it was not updated to version 22.3, 22.2 was friendly to AMC and had a sense of existence, but it obviously converged after the update ~ so I ruled it out; Besides, it's really hard to say what this generation's back waist is. No matter what responsibility it is, it has the most low points. If defense has its own unique advantages, it will basically not consider the tactics of taking back waist in this generation! Yes, I'm Guardiola! Let's talk about why we chose the all-round midfield instead of others. There are too many reasons. I won't tell them one by one. This generation of all-round midfield is easy to use and has a high fault tolerance rate ~ of course, it also has its disadvantages, but in general, the advantages outweigh the disadvantages!
Finally, let's talk about the striker. In fact, this generation is the same. The players in the middle position play very generally, but the striker players are a little better. After all, there are scores when there are goals. Sometimes the opposite side is not marked deeply, and the middle players play more comfortably. As for the all-round forwards on both sides, he should not only withdraw and hold the ball, but also cooperate with the full back (why choose the all-round forward? Because without the support of the full back, only the all-round duty can be competent, and the duty has the habit of pulling the edge)
For the specific selection of this tactic, the full back has no problem whether it is against the foot or along the foot. Of course, it's best to pass the cow leather in the middle. In this way, you will find that the forward can fly with bread!
Midfield selection: the all-round midfielders on both sides should give priority to those with certain passing ability and dribbling ability. The middle can follow suit and those with defensive ability can go. Generally speaking, they are all-round midfielders. Of course, the more omnipotent three people are, the better
Forward selection, if this generation can have high and fast players, then the opposite defender really doesn't know how to defend; If not, the all-around strikers on both sides have priority to have the ability to hold the ball and the players who pass the ball. Of course, it's best if they can be high and fast! The middle player has relatively no height requirements. As long as he plays well, he is generally the most popular player in the team with the highest score!
Well, after saying so much, the specific tactical content still depends on everyone to find out ~ as for the record test chart, I won't post more, because it is produced by the poison king and I won't send it without quality assurance! There is nothing to pay attention to except that other setting details are not required for the setting! In addition, the running in of this generation is slow. The tactics just put down may not be effective, but they become more and more fierce in the later stage. We should be patient. Of course, a large number of new arrivals and transfers will also affect the running in between players. Pay attention! Support hand fighting and simulation ~ vacation is not recommended! The effect is not very good. It is recommended to give it to the teaching assistant candidate 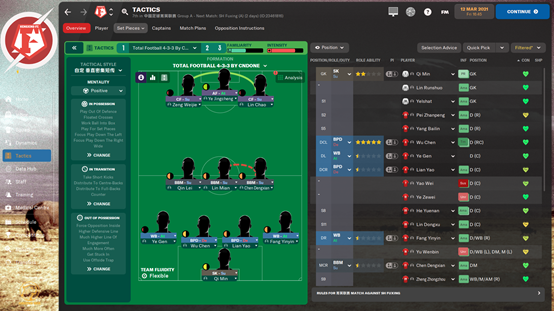