Download
Overview Updates (1) History Discussion
After trying many ideas and formations in my Barcelona save, I found this. It was in my Barcelona save where I'd cleared out most of the squad and brought in plenty of young faces, whilst trying to turn current young players in the team into world beaters and after a season of struggle, this changed everything around.

To quickly brief my achievements with Barcelona before explaining the tactic, I went undefeated in the 21/22 season winning the tittle, along with winning the Champions League comfortably and winning the league trophy in Spain, so a treble. This also skyrocketed some of the development of my players, which could've been a mixture of other aspects too, but players like Eric Garcia, who's attributes increased a lot along with new signings Dodo and Gaya.

Onto the tactic itself. It isn't the most complicated thing and I find it better that way despite many good tactics being very complicated. The overall idea of the tactic is to win the ball in defensive areas and get the ball as far up the pitch as soon as possible, either through the player who won the ball back launching the ball up the pitch to one of the strikers, or them passing it off to a more creative player to do that same thing, but nonetheless long-balls are often the way the team will score.

(These images are attached, incase anyone wanted to have a larger version, or just click/tap on them to enlarge) 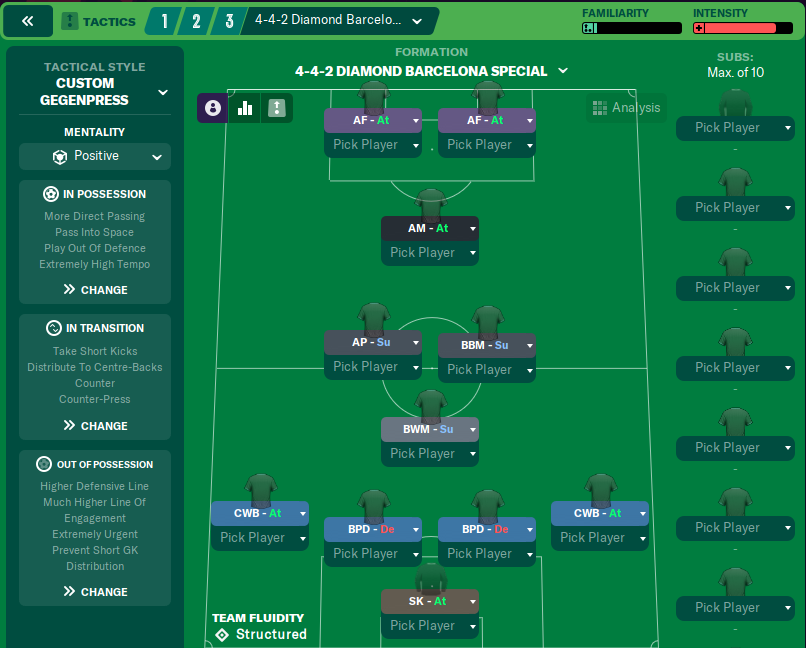 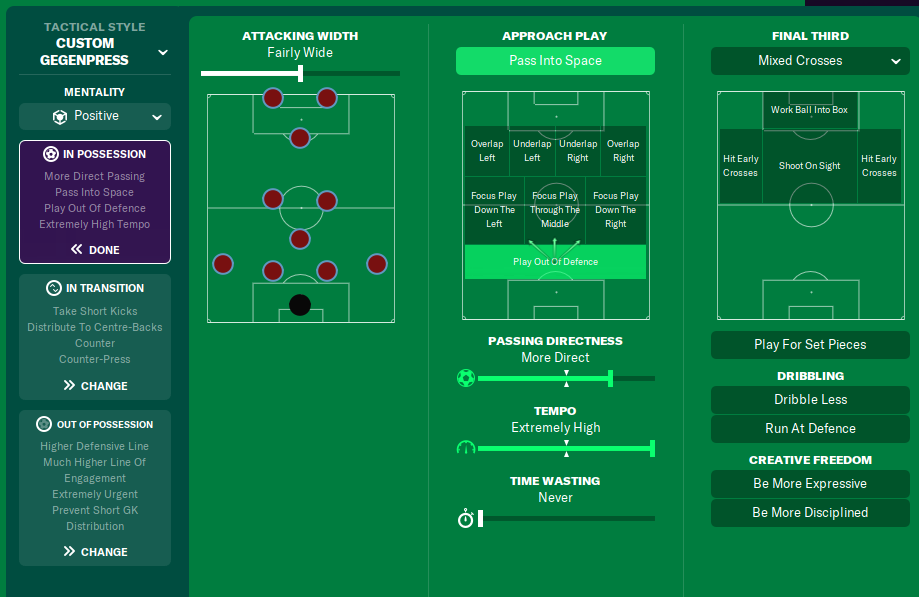 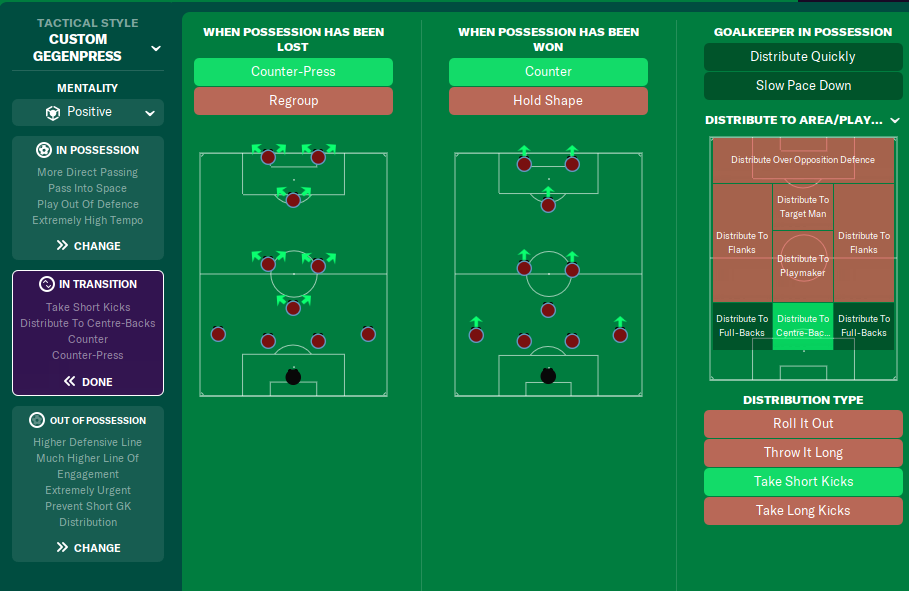 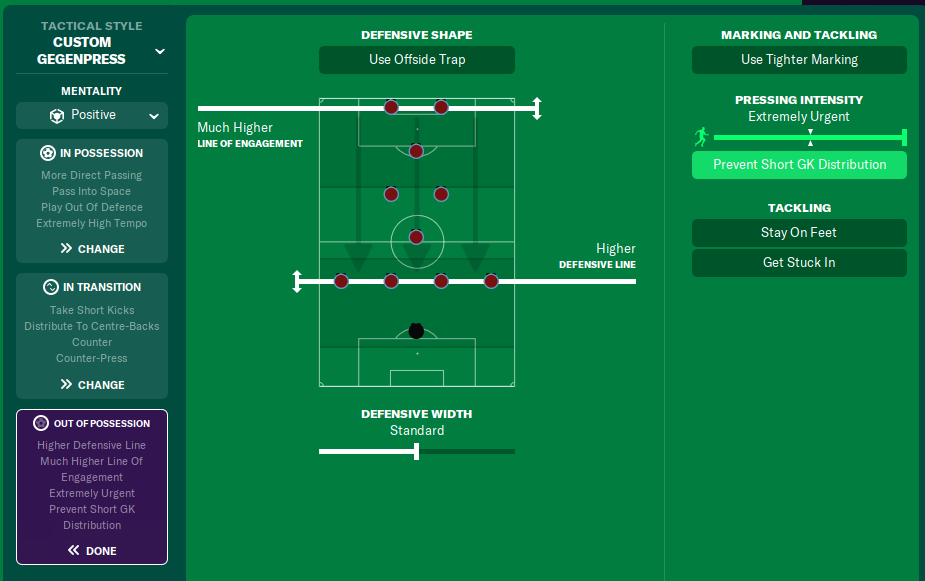 Now more specifically, starting in defense, these are my idea for the role of the player:

Goalkeeper: Having a sweeper keeper on attack is vital, because of how the goalkeeper will often try and send out a long ball trying to unlock the opposition defense from all the way back in their defensive half. Donnarumma, my goalkeeper, actually got a few assists. Not only this, but the tactic is occasionally prone to a long ball itself because of the attacking full-backs (which I'll get on to later), so the goalkeeper acts as a third man in the defense along with the center backs.

Full-Backs: Again, like the goalkeeper, the role of complete wing-back attack is very important. This is a tactic without wingers, so even with the more or less meta having a congested midfield, there needs to be width somewhere for another option. These full-backs will move very far up the pitch, often acting as wingers themselves and they'll give many opportunities for players to pass to in the attack. These players will often try to dribble and lay it off to an attacker in the box, or will sometimes go for goal themselves and occasionally they'll win a penalty too. Generally, the most important attribute in this position would be pace + acceleration. 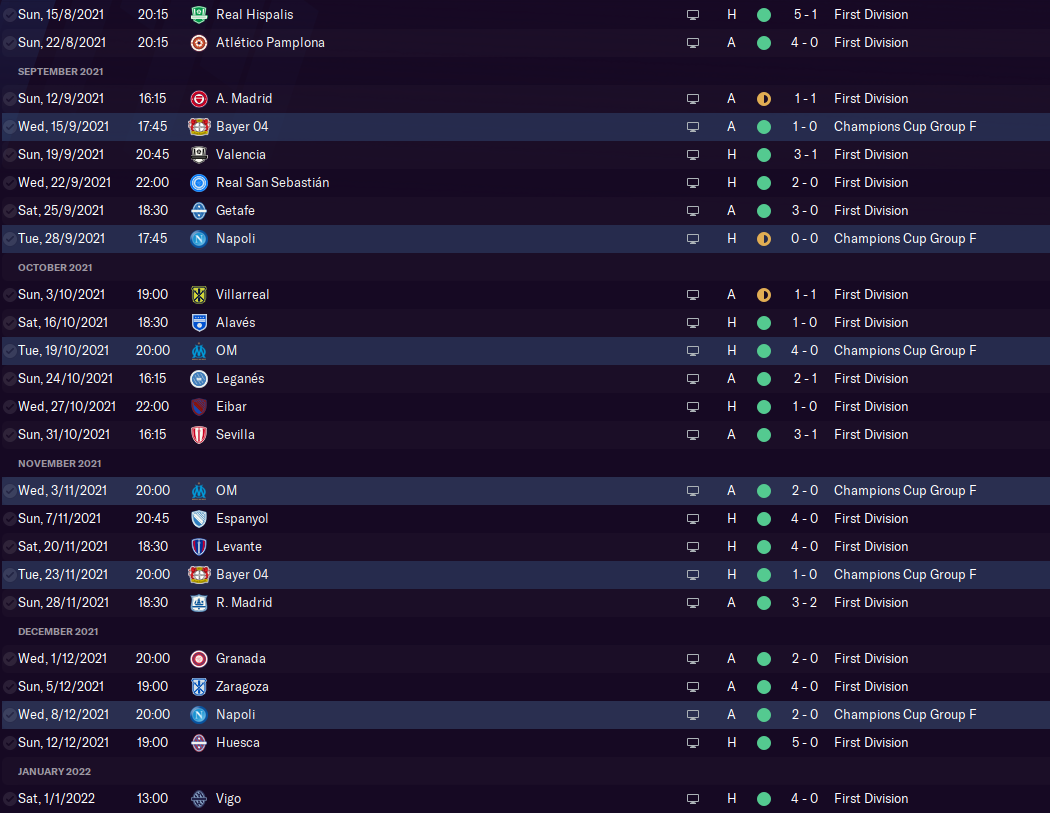 Center-Backs: Having a ball-playing defender allows what I said would happen in the general explanation of the tactic, the player will win the ball and try a long ball themselves or they'll pass it off to another, more creative player. Another role wouldn't normally try a long-ball themselves, so the ball-playing defender role is important. In this position no attribute stands out as being super important, but it does help to have decent vision and passing.

DM (BWM): I think a lot of roles could've worked well in this position, but a defensive role was necessary, because of the more playmaking roles ahead of it. The position is very necessary to do the extra defensive work the positions ahead of it wouldn't normally do and it provides cover to the center backs at the same time. I chose a BWM Support over anything though, because the role makes a player willing to try and long ball themselves, which is the main way this tactic scores goals. The player just needs to be physically and defensively sound, but some passing ability would go a long way too.

LCM (AP): This role is crucial for the side. This would more or less need to be your side's best player, because of how they are the main instrument to the attacks. What I like about this tactic though, is that basically any player can contribute a lot to the attacks, because all it takes is one long ball, but nevertheless this player's goal week in week out will be to create. The first time I've mentioned this, it's important to have the player's foot matching their side, so for me it's a left footed player on the left side. This just makes it more accessible to hit the ball for the striker in a lot of space to run into, instead of hitting the long ball more inside, in a more congested midfield area for the striker. This player just needs good passing and vision over everything else, but dribbling would help too, to unlock the opposition in other ways. 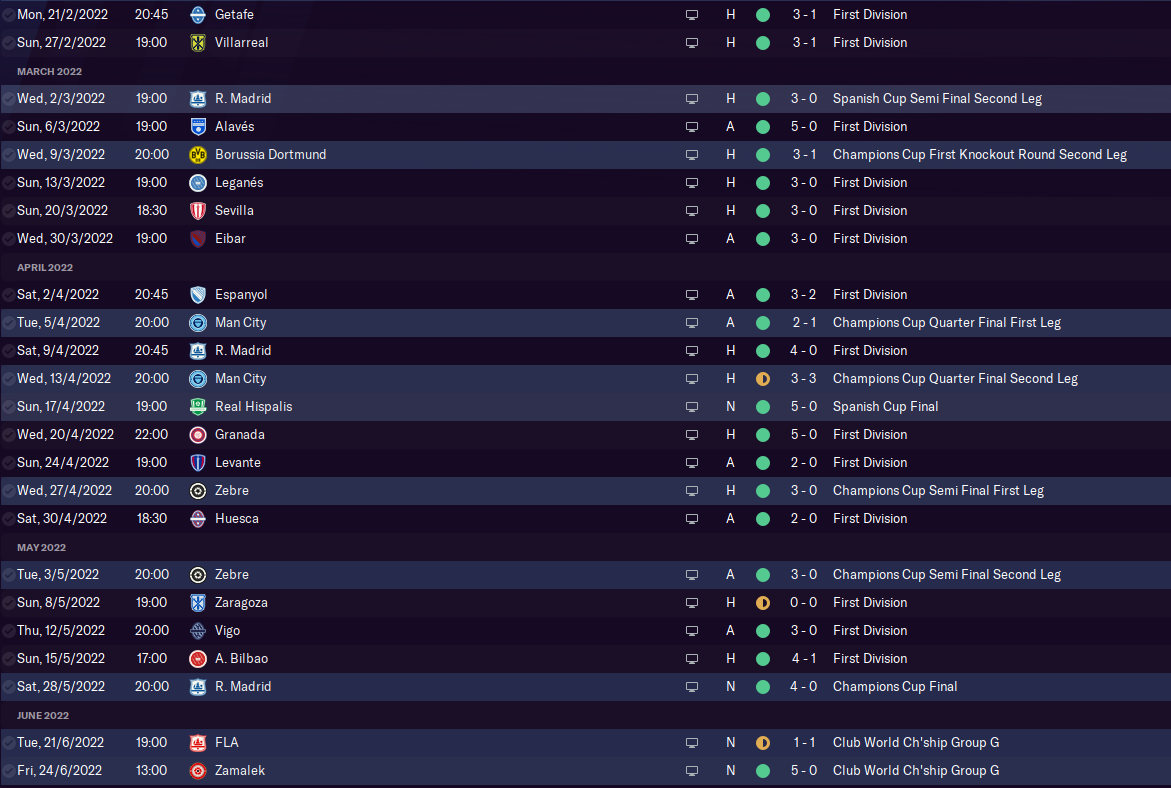 RCM(BBX): I don't think any tactic is ever built around a box to box player, because they are always that all round good player who'll help the team wherever necessary. Originally I found the BBX role to not work very well, but then I brought in the DM as a BWM and it changed a lot. The BBX will be naturally encouraged to take long shots, so they'll add an offensive threat in a different way to a long ball, while they'll still win the ball back and try a long ball themselves. I'd say that it would help to have the player's footedness to match the side they're on for similar reason to the AP, but also for long shots. Overall an underrated part of any system and they'll always put in a great job for the team. A little bit of everything is need for the player occupying this role, with good physicality and technicals being the most important.

AM: The attacking midfielder is an interesting, yet important role in the team. They definitely create chances (like long balls), but less so than most would think, because they actually get on the end of a lot of scoring opportunities too. This will mostly consist of scraps the strikers cant finish, but they also seem to become a target for the low crosses from the byline from the full-backs. With no wingers, and two strikers, I've found it's important to have three attacking players in a team, no more, no less, so this is the best way to incorporate that without wingers.

LST: So whilst both striker roles are AF, I do like to have something different from both of them. The common variable between them is the pace and acceleration, which needs to be high and that's the only main requirement of these roles. Specifically though, I do like one of my strikers, in this case the left striker, to be a bit more physical and better at shooting, so they can win the areal duel from the long ball, set themselves up for a finish and put it away in the back of the net. The main role of this striker is to, like I said, win the ball aerially or run onto it and simply finish it - a simple tactic.

RST: So a lot that's needed to be said has already been said in the left striker description, but I'll say it anyways. The striker needs pace, simple as that, pace and acceleration. The specific attribute that I like in my other striker (the right striker for me), is dribbling. This means a pass from one of their teammates, allows them to beat their man and dribble to the goal, combining with their pace. This creates a great combination between the two strikers, with them both offering two different components which combine to make the perfect striking pair. 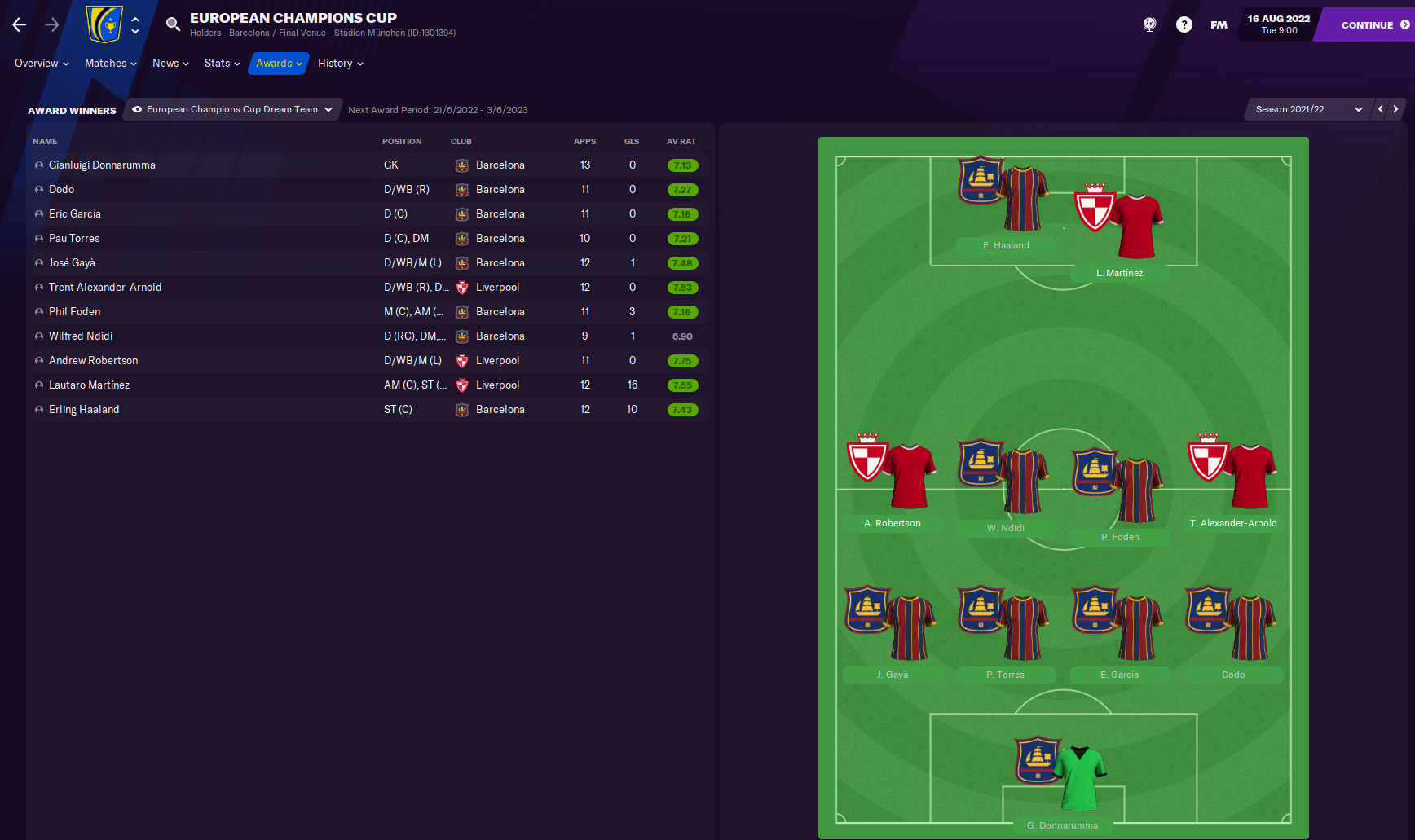 I won't ignore that I could be a beneficier from good players, but these players basically became good, or a lot better because of the tactic, like Haaland for example who was very good when he joined, but he became one of the top 5, top 3, maybe even best player in the world from this tactic.