On the 27th of February 2001, Jurgen Klopp began his managerial career with Mainz in Bundesliga 2. In his first full season, he implemented his now-famous pressing game. He achieved promotion in 2004 after narrowly missing out in the seasons prior.

In May 2008 he was appointed the manager of Borrusia Dortmund. His spell with the club lasted from 2008 till 2015 and during that time he evolved into the coach and man he is now. He immediately imposed his style onto the club giving them an identity that bucked the trend, his teams were often described as heavy metal in a time dominated by possession. Between 2010-2013 Dortmund were a dominant force in German football, winning the Bundesliga in 2011 and the double the following season. They lost in a hard-fought game in the all-German Champions League final to Bayern Munich.

Since joining Liverpool in 2015, Jurgen Klopp has transformed the Reds into one of the most feared sides in Europe. Similar to his time at Dortmund he has taken a sleeping giant and restored them back to their former selves. It was not without heartache though as Liverpool lost 3 successive finals before finally winning the champions league in 2019, which was backed up with the 2020 Premier League title.

Klopp's objective was to rebuild a club that had just survived financial ruin and did not have the money to compete for players in the transfer market. Therefore, he built a system around Dortmund’s youth players and cheaper experienced players. Below I will outline both the similarities and differences in the approaches used by his Dortmund and Liverpool sides. See the link to RDF's Liverpool tactic. Dortmund under Klopp were a passionate and exciting team, who mastered the transitional phases of games.

If there is a single tactical element to describe Jurgen Klopp, it would be Gegenpressing. All Klopp’s teams are synonymous with quick counters and counter-pressing, however the way Liverpool press has been more controlled and refined compared to the ultra-aggressive pressing of his Dortmund side. 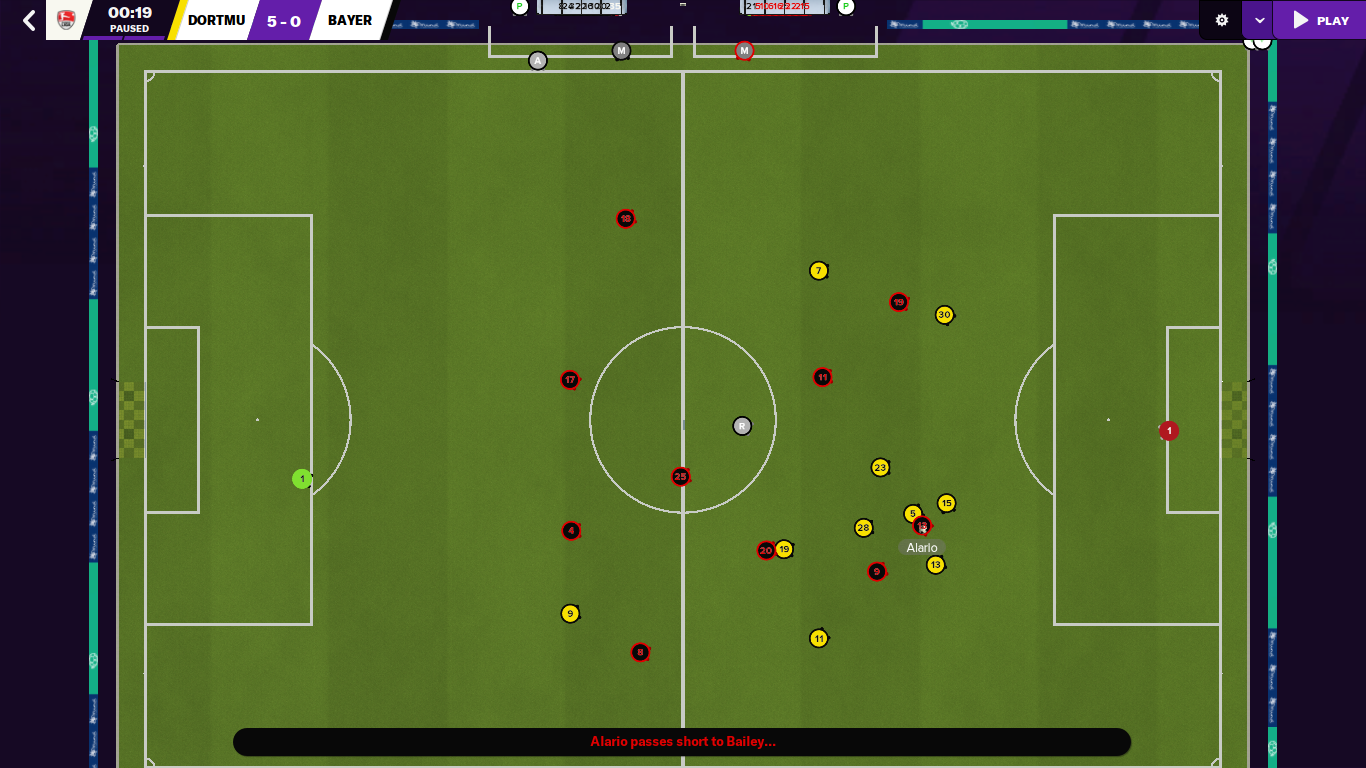 Liverpool and Dortmund differed in their formations, Dortmund played a 4-2-3-1 as their best players played centrally. On the other hand, Liverpool’s strength is in the wide areas and as a result, they play with a 4-3-3. Unsurprisingly the way the teams look to attack is different and a consequence of the attacking methods is seen in the way each team counter presses. In defence Dortmund fall into a compact 4-4-1-1 system but in attack the shape resembles more of a 4-2-4 shape with the wingbacks pushing high to support the attacks. 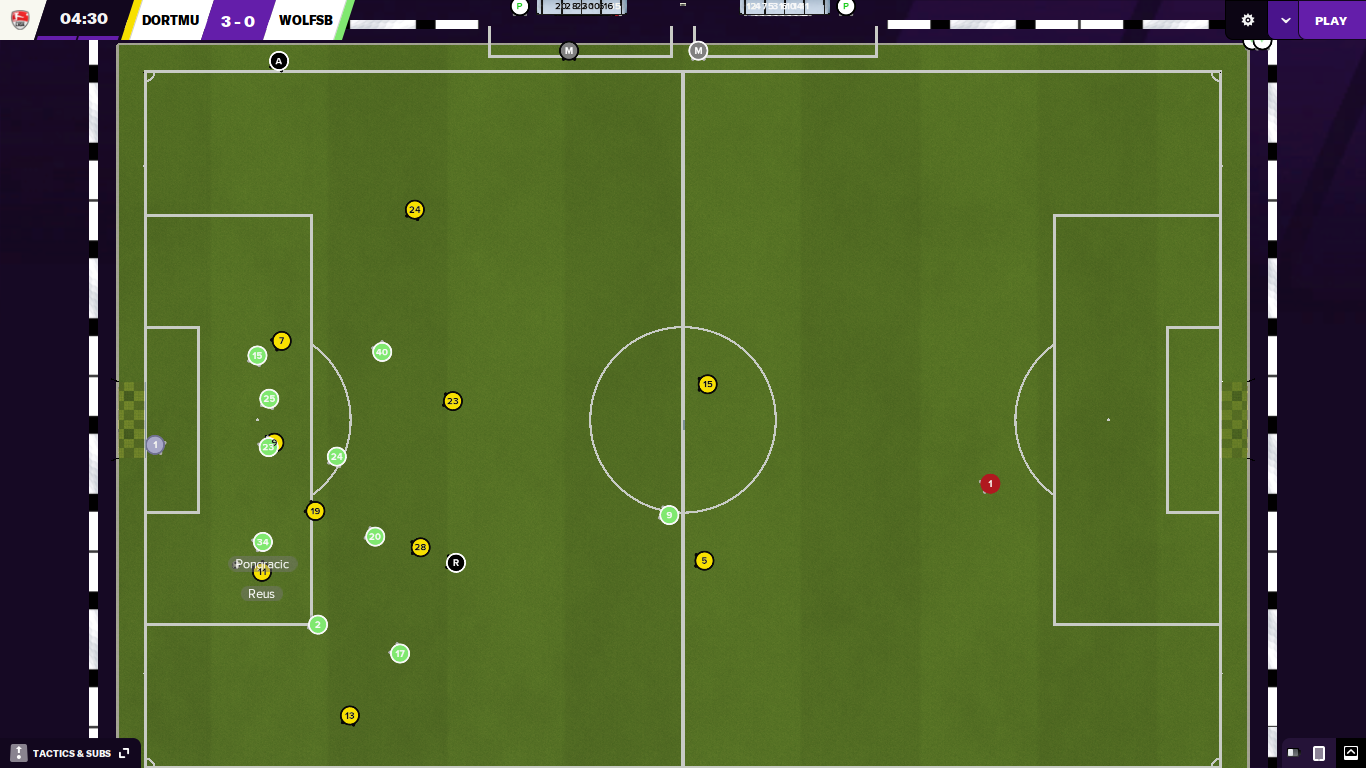 In order to execute their version of counter-pressing, Dortmund attacked with a narrow shape. Dortmund would usually focus their play down one side of the pitch. With the goal of breaking through on this side or to regain possession quickly after losing the ball with their compact shape. They used the sideline as an extra player increasing the effect of the Gegenpress by further limiting the passing options for the opposition. 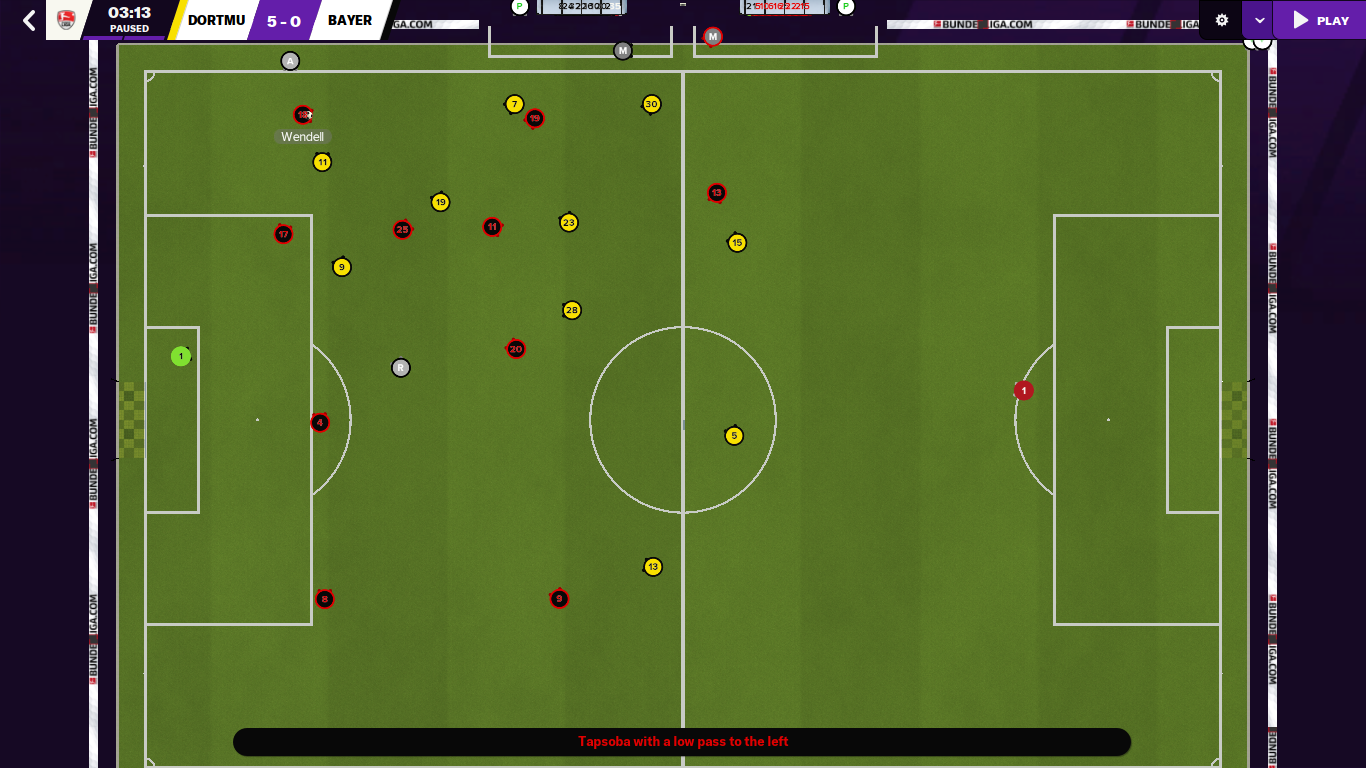 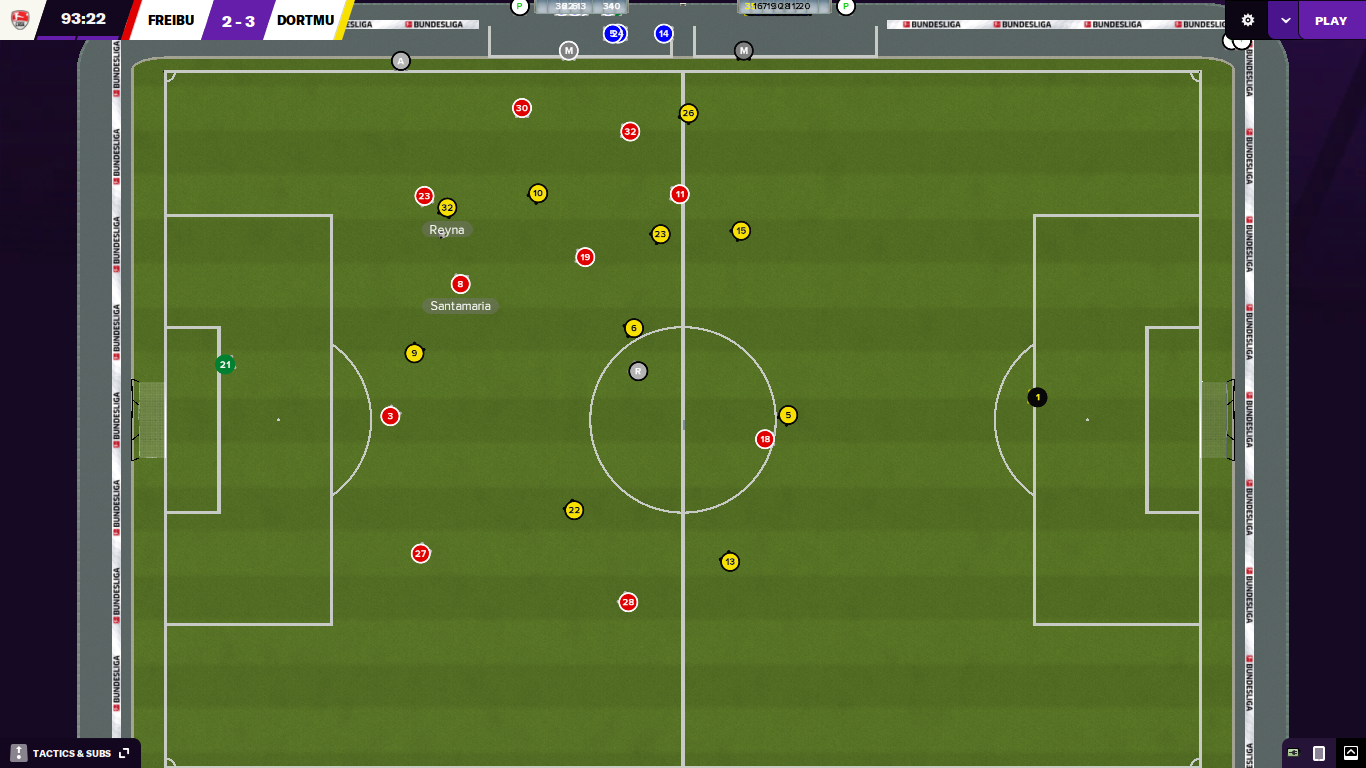 Once the ball was turned over the full effect of the Gegenpress would be unleashed with lightning-fast counter-attacks cutting through disorganised opposition defences. Klopp himself stated that “Gegenpressing is the best playmaker” with Dortmund creating high numbers of chances through their counter-pressing game.

Compare this to Liverpool and you can see how the press has been refined over time. As mentioned above the teams attack differently with Liverpool generally facing teams using a low block forcing them remain more patient in attack, they averaged close to 60% possession over their title winning season. Liverpool’s version of the counter-press is more about preventing teams from counter-attacking them, before rebuilding their own attacks as their options to counter in a similar manner to Dortmund are limited due to the more cautious approach of their opponents.

Klopp has developed his teams pressing triggers, looking back at old games of Dortmund you can see they set up in a mid-block in a 4-4-1-1 formation. The two forwards used cover shadows to prevent the opposition from passing the ball into the midfield. One of Dortmund’s big strengths was the willingness of the wingers to track. Allowing Dortmund to outnumber the ball-carrier near the sideline stopping the opposition’s attack. 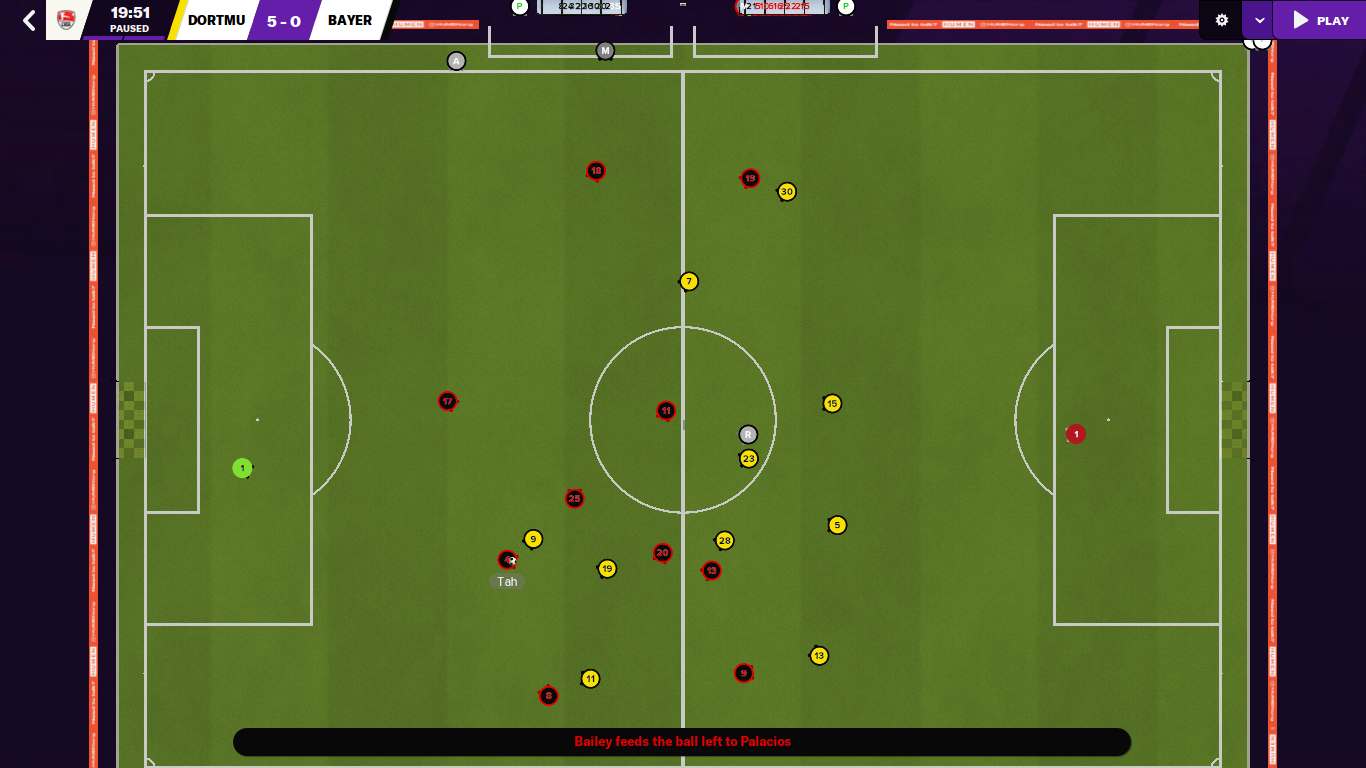 Dortmund prevented the opposition from playing any penetrative passes and started their press with certain triggers. A bad pass, miscontrol of the ball or a closed body shape of a receiving player meant that Dortmund’s players started to press the ball-carrier and shut down all short passing options. If the opposition played backwards to reset their attack, Dortmund would not necessarily continue their press. This is the first major difference as Liverpool continue their press hunting the ball all the way back to the opponent’s keeper. Liverpool’s press has become more proactive and smarter, they will often use the midblock to set their own pressing traps such as horizontal passes.

he Liverpool press starts higher than Dortmunds. Unlike Dortmund Liverpool use horizontal passes as a trigger to press. This enables the wingers to start the press forcing the centre-back to play the ball back inside. This reduces the width of the opposition build-up play. Obviously, this changed pressing approach also required a change of the setup. In the 4-3-3. The wingers press the centre-back forcing the opposition build-up into central areas. With Liverpool using their own cover shadows similar to Dortmund.

Recreating the tactic in game

Dortmund use a 4-2-3-1 as their base formation which can then transfer to the 4-4-1-1 in defence or the 4-2-4 in attack. Klopp liked to use the double pivot with a DLP sitting alongside a more solid midfielder destroyer. 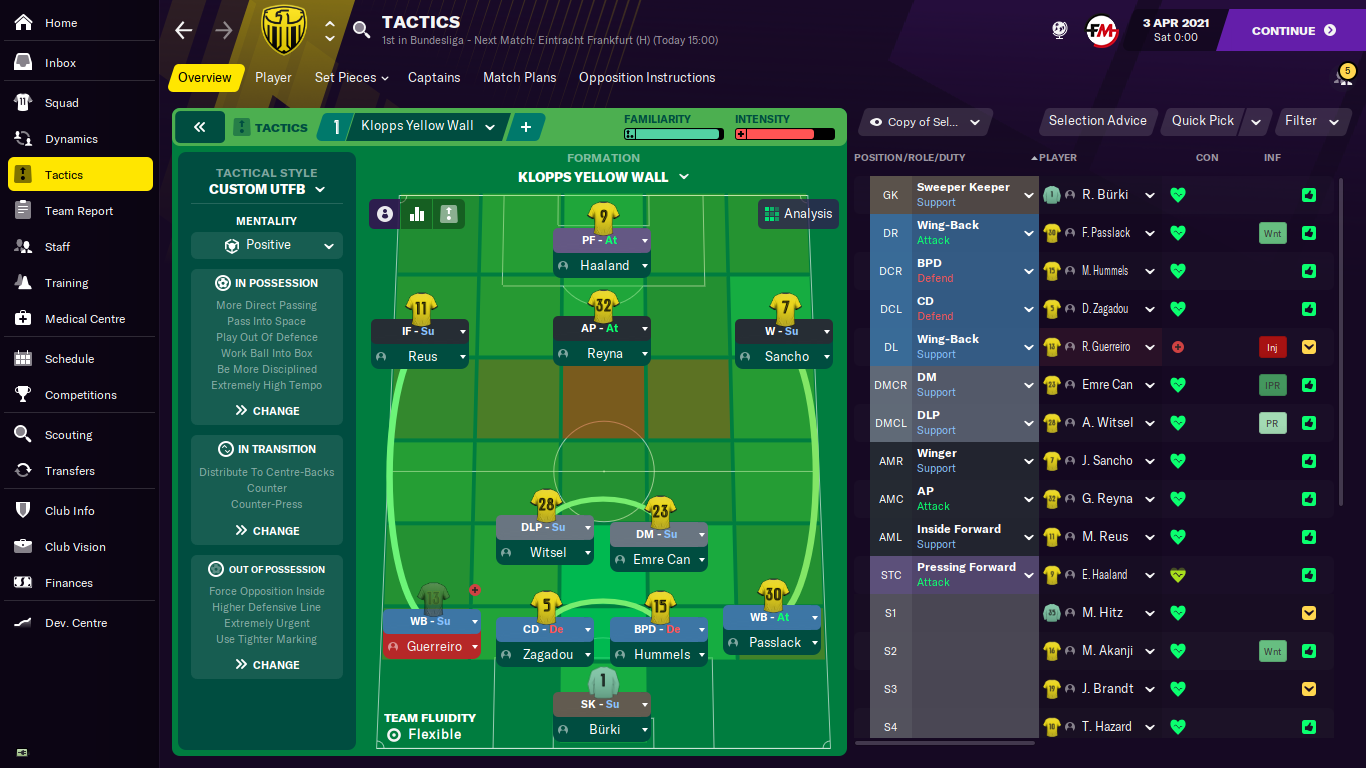 Dortmund would build from the back, the keeper would look to pass the ball into hummels who was especially important as he could either play the ball into Gundagon or if teams marked him he could step out of defence to initiate attacks with his range of passing. The DLP if afforded time and space could hit long diagonal passes into the channels or up to the striker, allowing the team to advance up the pitch as quickly and efficiently as possible. 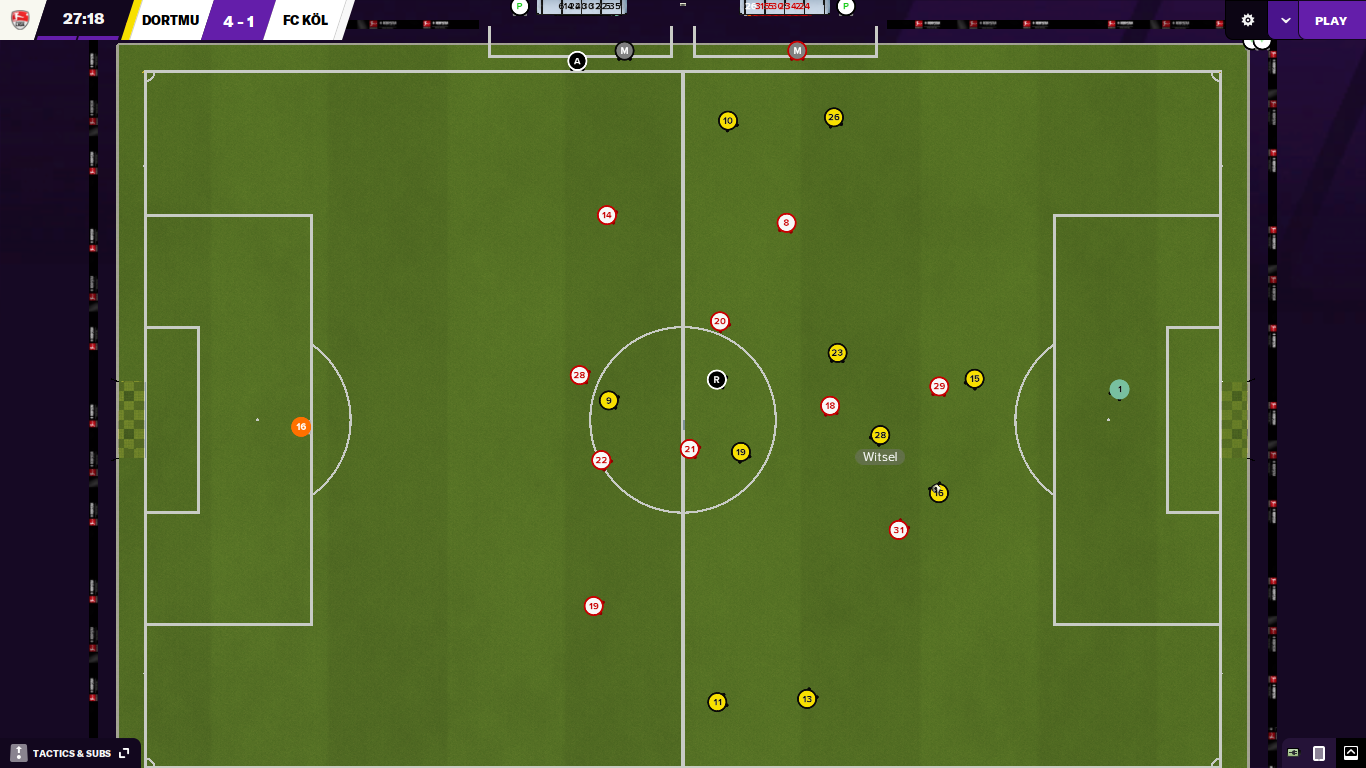 The keeper can also go long to exploit any gaps for the forward players to run into. 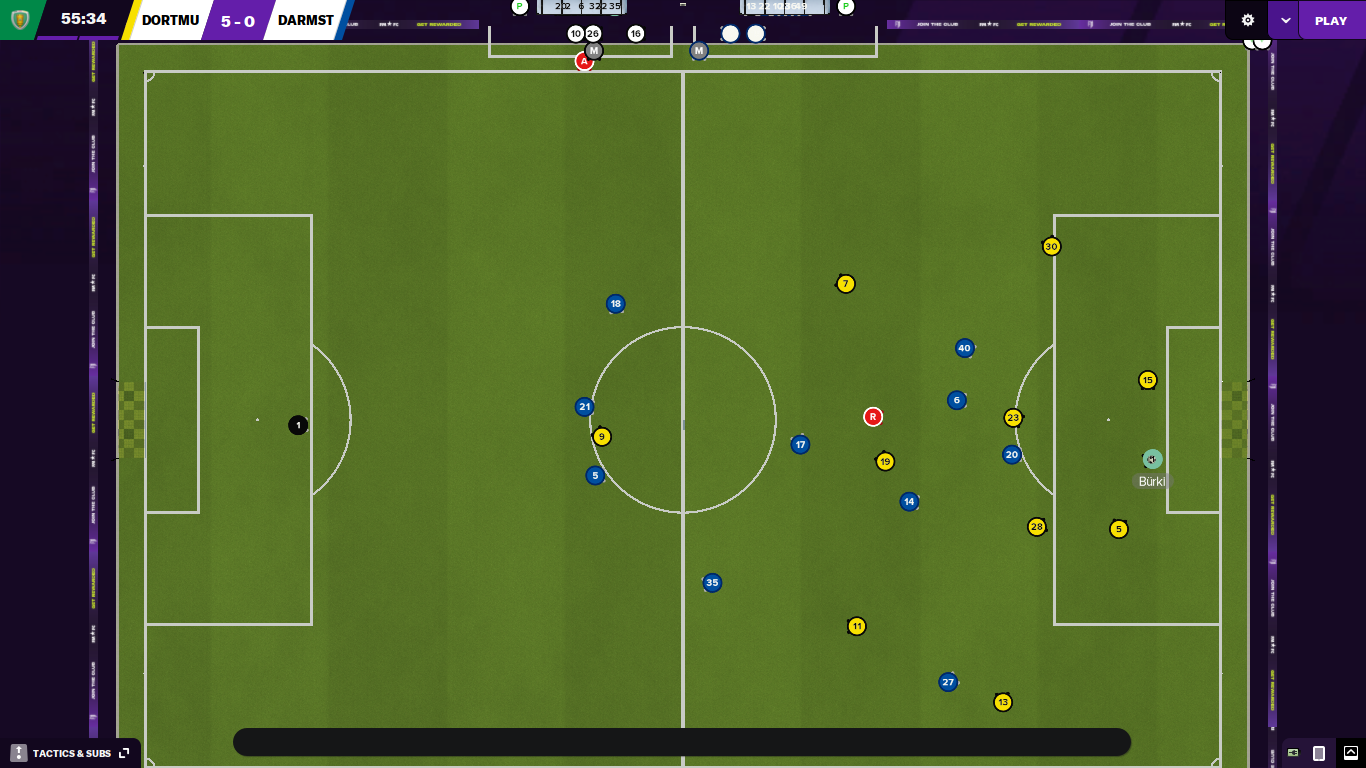 With the ball Dortmunds primary aim was to play fast direct passes into the opponents third trying to unsettle them through their high intensity play. Dortmunds strength was in the central areas with the wingbacks being tasked with bombing up and down to provide the width. With Reus in the team Schmelzer was tasked with being more attacking than he previously used to. The front 3 were all instructed tp freely roam to create space for one another, often Gotze would be out wide whilst Reus attacked inside with his pace. 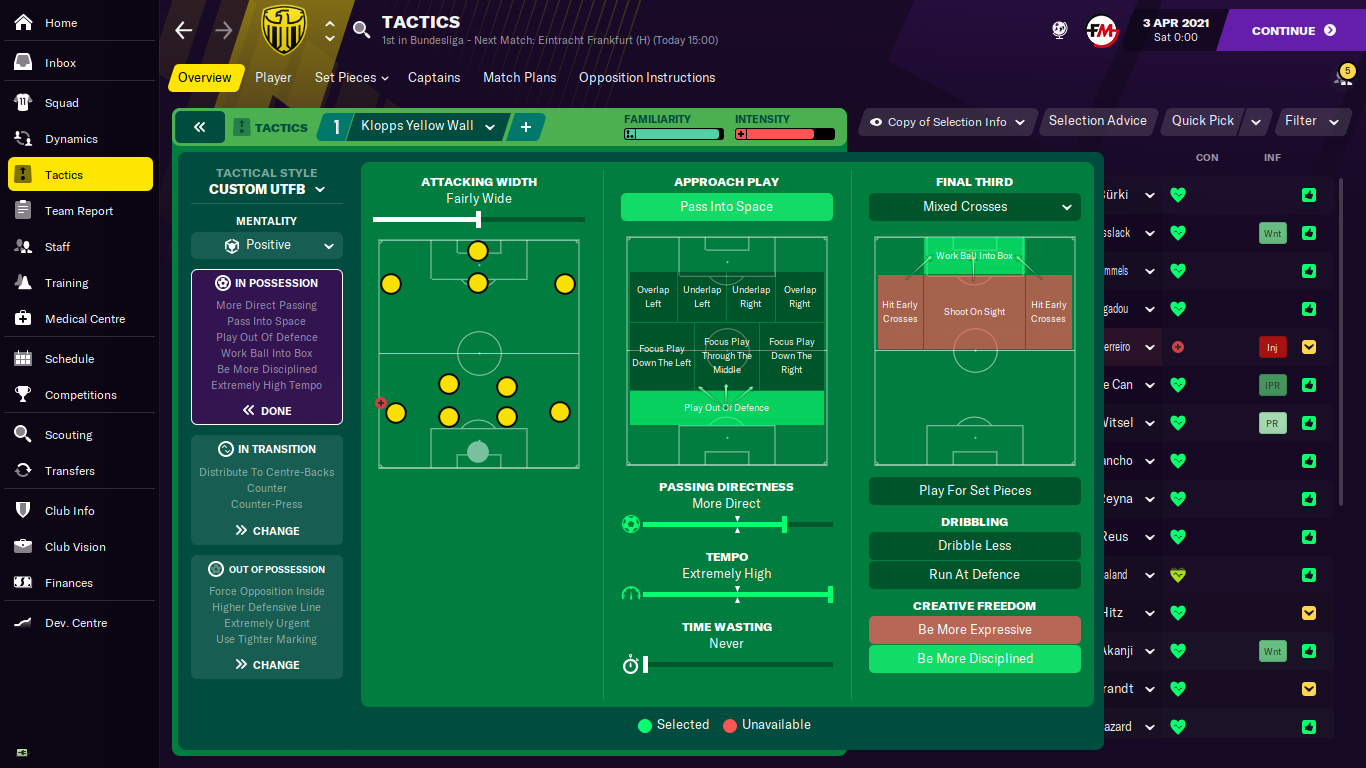 Dortmund looked to play on the front foot and this was facilitated by trying to win the ball high up the pitch with a counter-press. This then allowed them to counter quickly and they often scored most of their goals through these transitions, 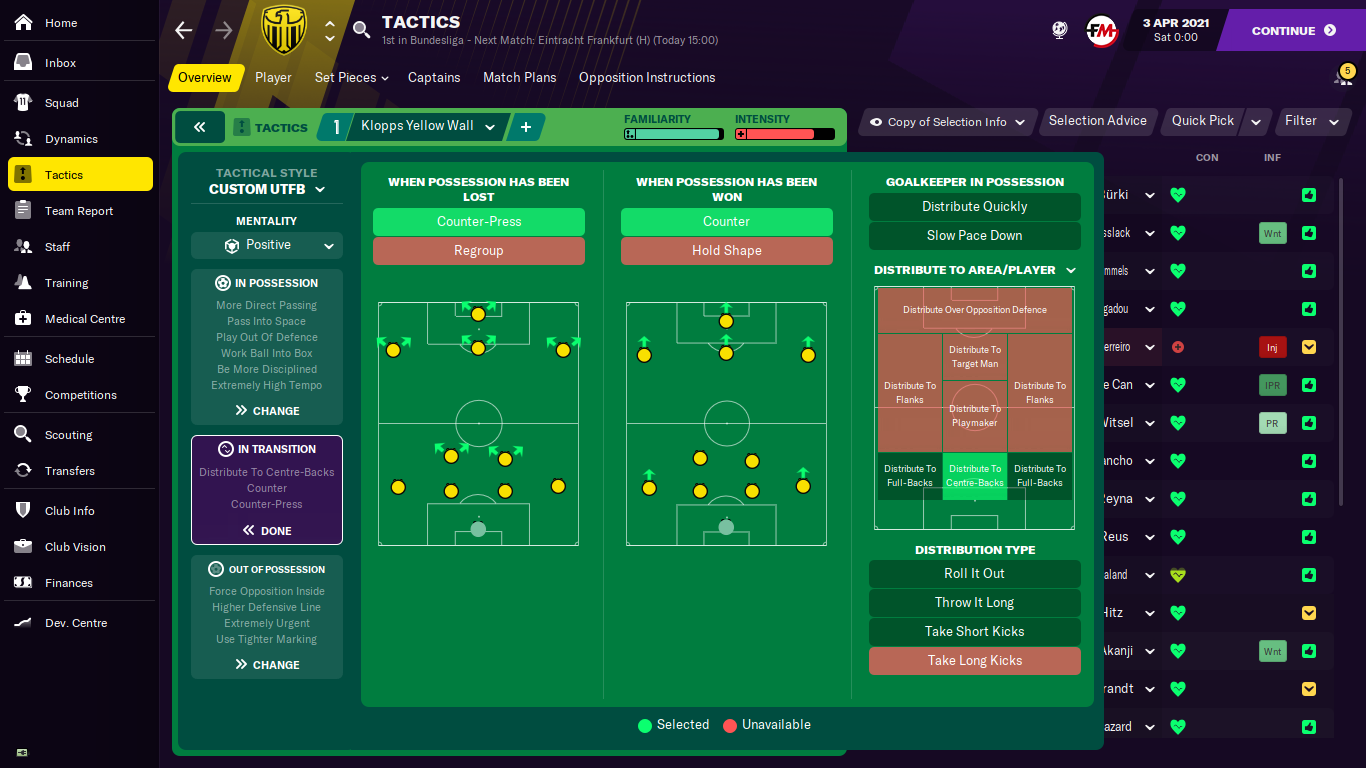 Without the ball Dortomund played a higher defensive line to remain compact and also allow them to press their opponents into submission. Although they looked to press high to win the ball back early they actually sprung their press from a midblock waiting for a pressing trigger before initiating their press. They looked to swarm and overwhelm opponents in the wide areas through their compact shape. Using the touchline as an extra pressing man meant the opponent had to play more risky passes or give up possession in dangerous areas.In game I would defend wider to replicate this then switch to a more narrow width when closing out the game. 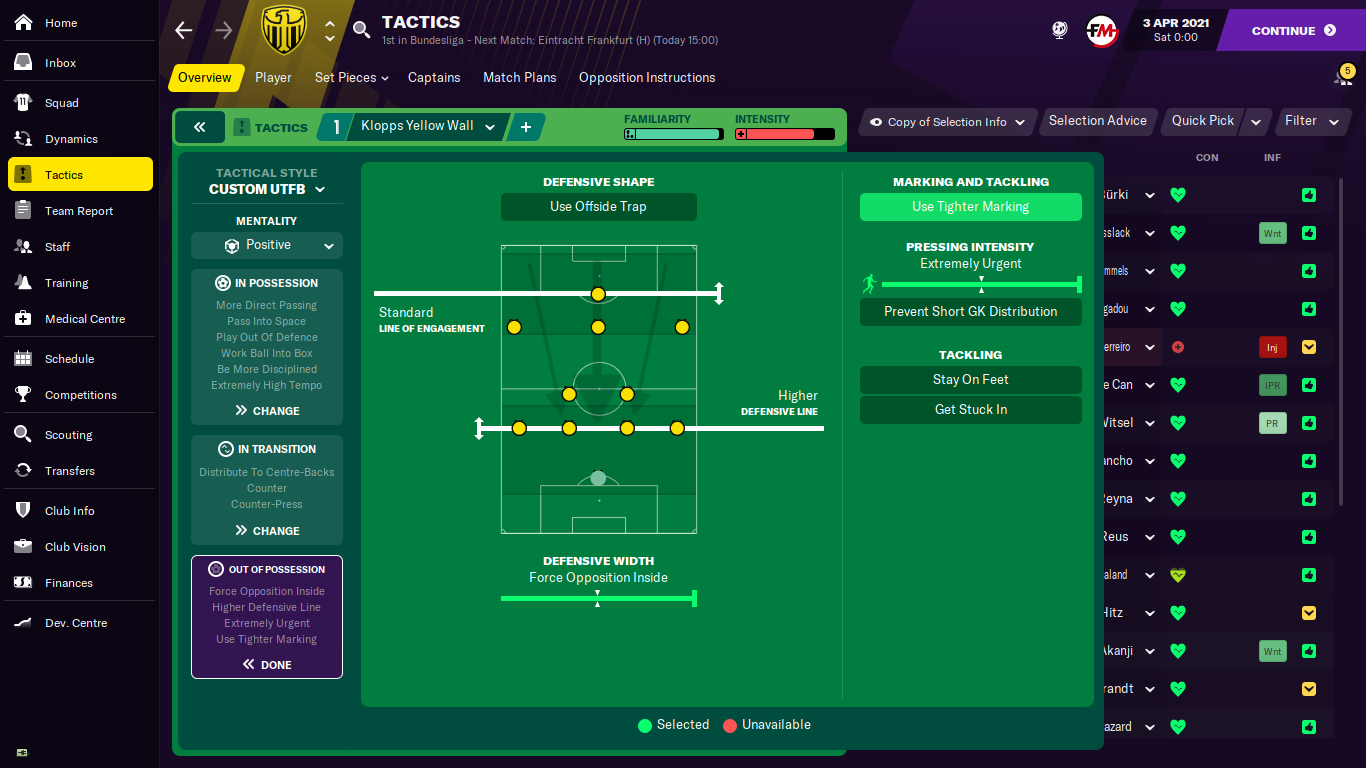 I was able to replicate the domestic double success winning the league easily, Haaland was comfortably the top scorerer in the league showing the effectiveness of the counterpress. 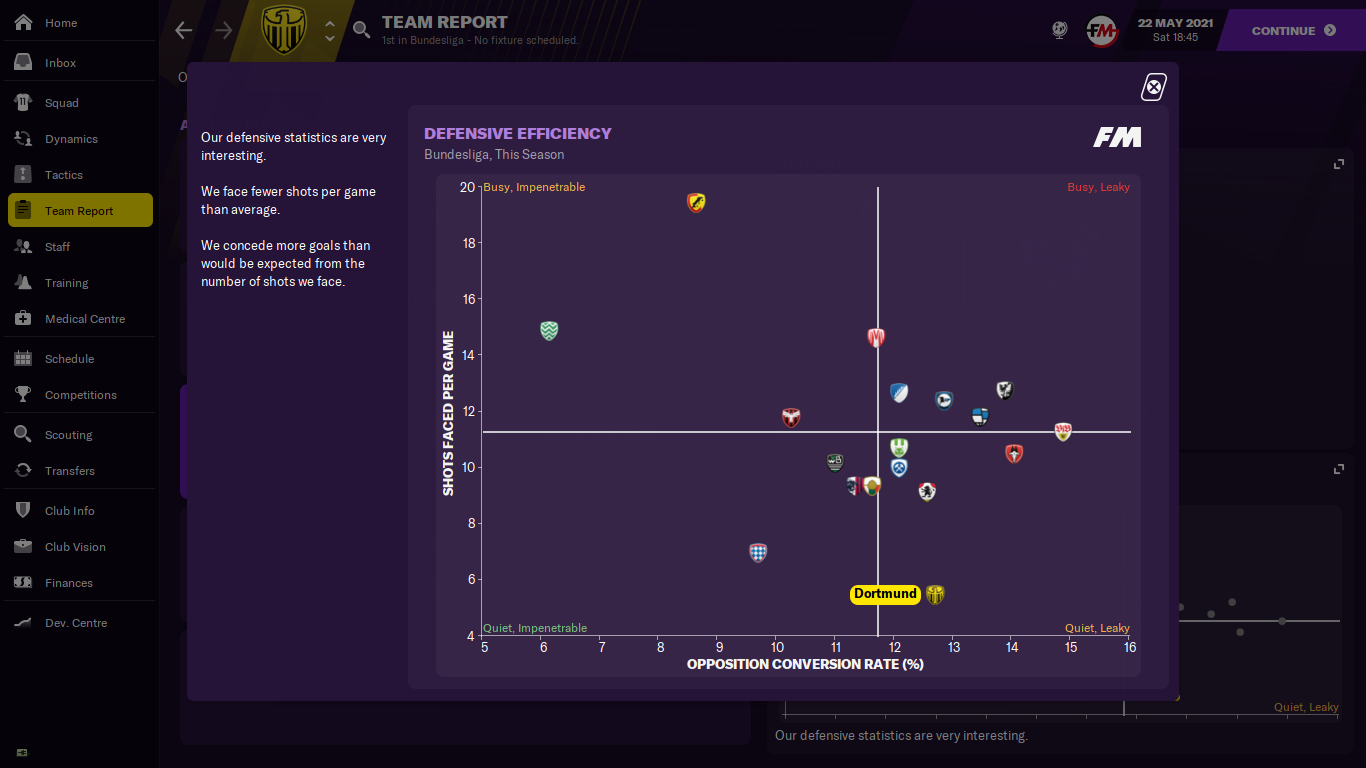