Download
Overview History Discussion
NOTE: This is updated for the latest Match Engine (v2039). The site doesn't seem to show it yet!

I began a save with FC Wil 1900 in Switzerland and wanted to try something new. Specifically, I wanted to play with a Libero. Of course, anyone who's played FM understands that finding a Libero can be very difficult.

This tactic seeks to utilize the Libero in this least compromising way possible, allowing for a less than ideal or perhaps a young Libero to shine even if he isn't the greatest. This is also my strongest tactic from FM2020. I started out with a tactic known as Wicksy 352, hoping to catch a glimpse of the Libero in action.

Of course, this tactic worked okay but didn't allow me to dominate small matches and only barely scraped wins later on in the season. It was very defensive, and I liked not conceding. So my tactic does a little of both.

So let's talk a little about positions and then we'll talk about results!

This is a pretty standard choice for tiki-taka tactics as you want to take advantage of quick counter-attacks. I chose the defend role purely because I wanted the Libero attacking and moving forward so having him more cautious made sense to me.

Complete Wing Back - Support:
This is my weakest position. You need great players to have this workout, but just having wingbacks with good passing and tackling seem to work okay. Having good physicals is almost necessary if you try using this in lower leagues as there's never a good enough wingback technically speaking to really shine in this role. Of course, again, mine are not great but seem to service well. Setting them like this forces them to track back to cover the defensive line while your Libero is out having fun!

Libero - Support/Attack :
[at the time I had it set to Support so most of my stuff has stats for that. I'll update later when I test with attack!]
The bread and butter of this tactic. Of course, it never seems like it is playing offensively but then you compare it to other top defenders and its offensive contributions are intense! You want all the staples of a good Libero: Passing, Dribbling, Flair, Vision, and Composure. Also, having traits like "tries to play his way out of trouble" "brings the ball out of defense" or "attempts long-range passes" are all good to have but not necessary. Let's take a look at my average Libero compared to a top Premier League defender. 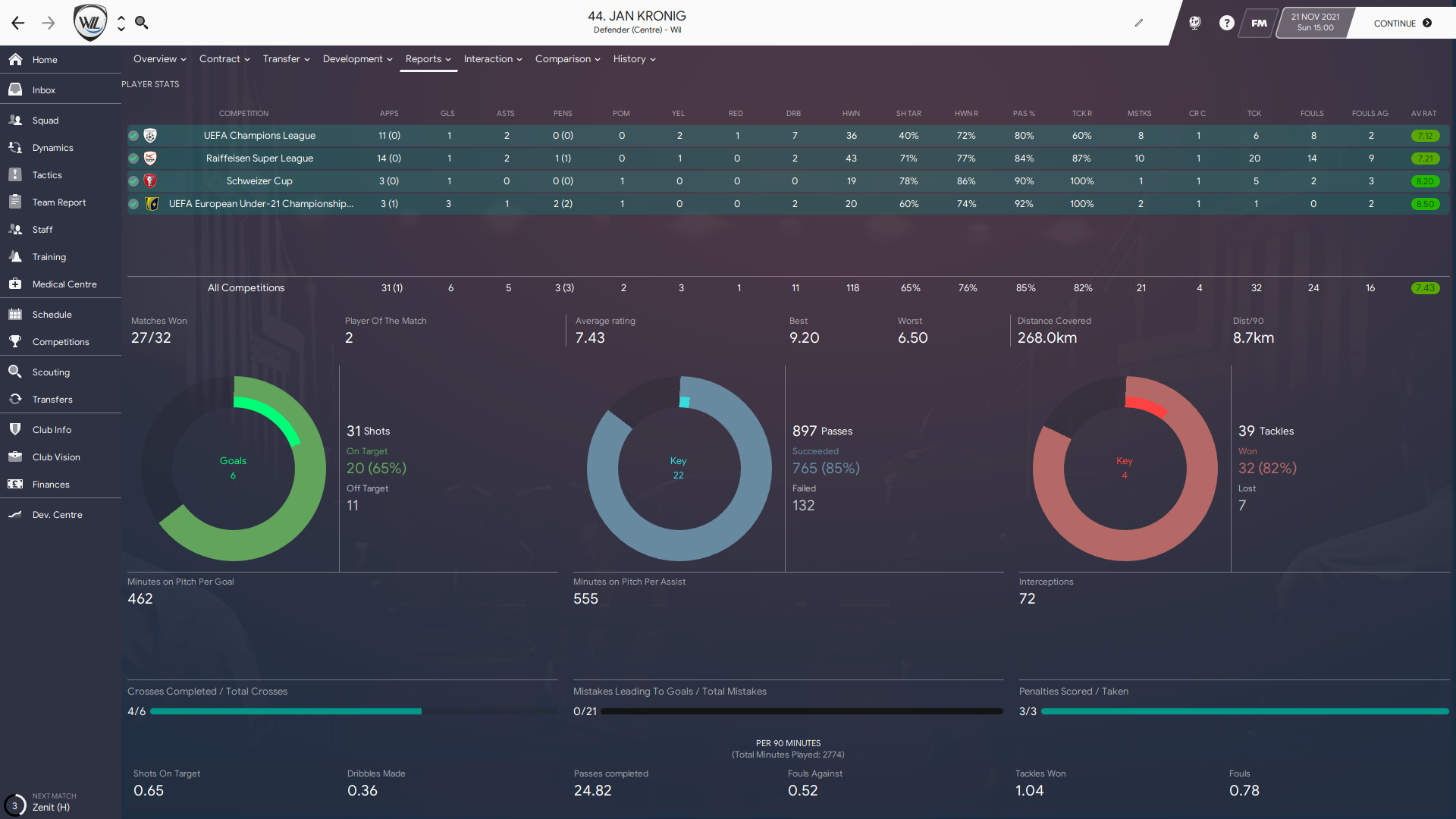 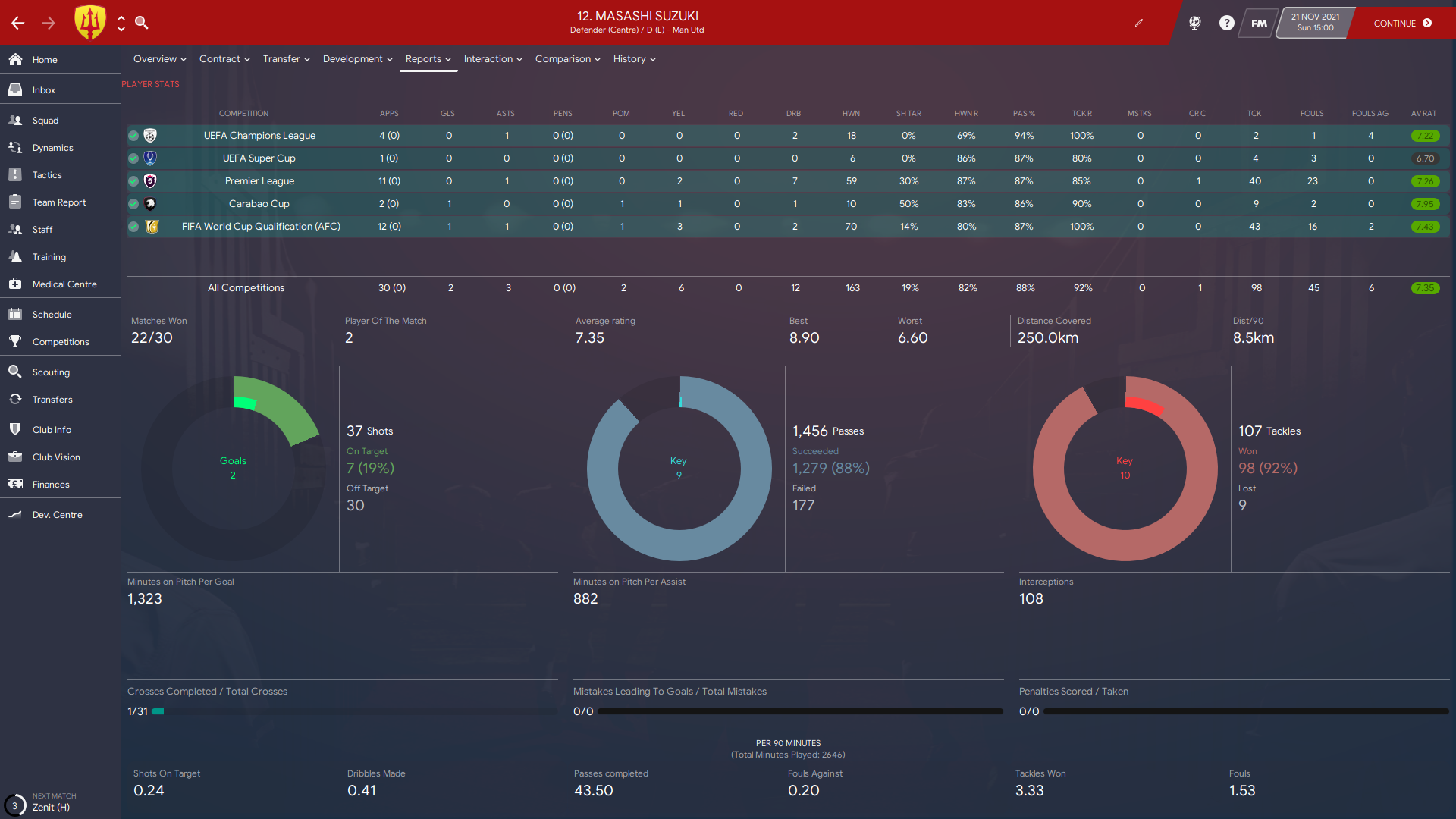 If you compare the two, the immediate thing that becomes apparent is how similar they are. Of course, Suzuki just so happened to be the player I was going after to become my Libero, a fantastic regen that I lost out to by Manchester United. United have the best defensive record in the Premier League in this save only conceding 9 goals from 13 matches. You can see, defensively, how much better Suzuki is to Jan Kronig (my Libero). However, a direct comparison will show that Kronig has much better offensive contributions in terms of goals, shots on target % and assists. Moreover, I've included a heatmap of a game against Roma. We were underdogs and won 3-1 (I'd drawn both my other Champions League fixtures against Roma before as well as Zenit. You can see how offensive his positions were with his average positions being near the center half! 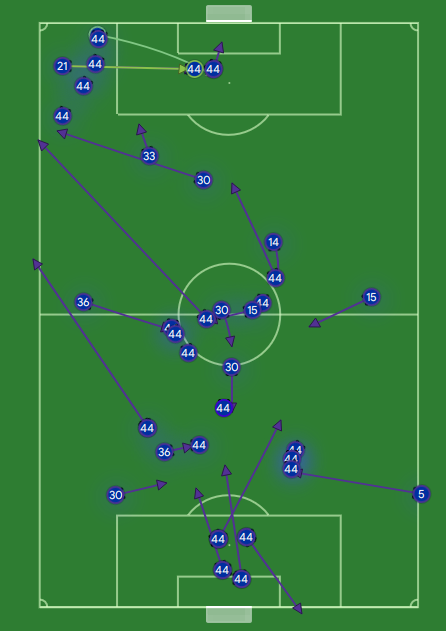 You can see this position is his ideal until he likes to bomb forward into the box. This is a typical pass you'd see from the Libero.

Check out this video on Streamable using your phone, tablet or desktop.

The best part is this guy is completely average! Of course, I'm constantly on the lookout for a top defender or defensive midfielder whom I can mold or shape into a Libero but it's nice to see that the position can still work functionally well with a subpar player!

Someone good with passing and who has great physical stats. Cover basically because they need to work harder to cover the space left by the Libero. You can switch this to either side of the Libero depending on if you're conceding on one side or the other.

Standard CM players. They fill the channels and give options to your CWBs, or they work to pull the defenders away for the Complete Forward to roam.

Nice on the support role as he tends to drop deeper to fill the space left by the Libero. This tactic does a lot of through balls and over the head passes so having a great DLP with vision, composure and passing work splendidly in this role.

Again, pretty standard forward role. On support, I like to put a forward with Long shots to get cheeky 18-yard box goals.

This is a great role for this tactic. You'll be playing a lot of through balls and this guy does wonders to clean up any missed through balls your midfielders/defenders may have miss-hit.


The Results
[note: it came to my attention that I had the editor on in my game, just an fyi I like changing managers of other teams to see how they do and probably had it on for that]

So I've been playing with this tactic with the new engine in my 3rd season and seem to be getting great results. I also ran a small vacation save with Wolves without any changes to the lineup, staff or players to see if this could be done plug and play and it seems to work okay but I'd need to test it more.

Another note, I let my Assistant set the OI's and it seems to work okay. YMMV. Also, you can switch the tactics mid-match to shorter passing, higher tempo when you need a bit of a change of pace. Also, get creative works wonders! 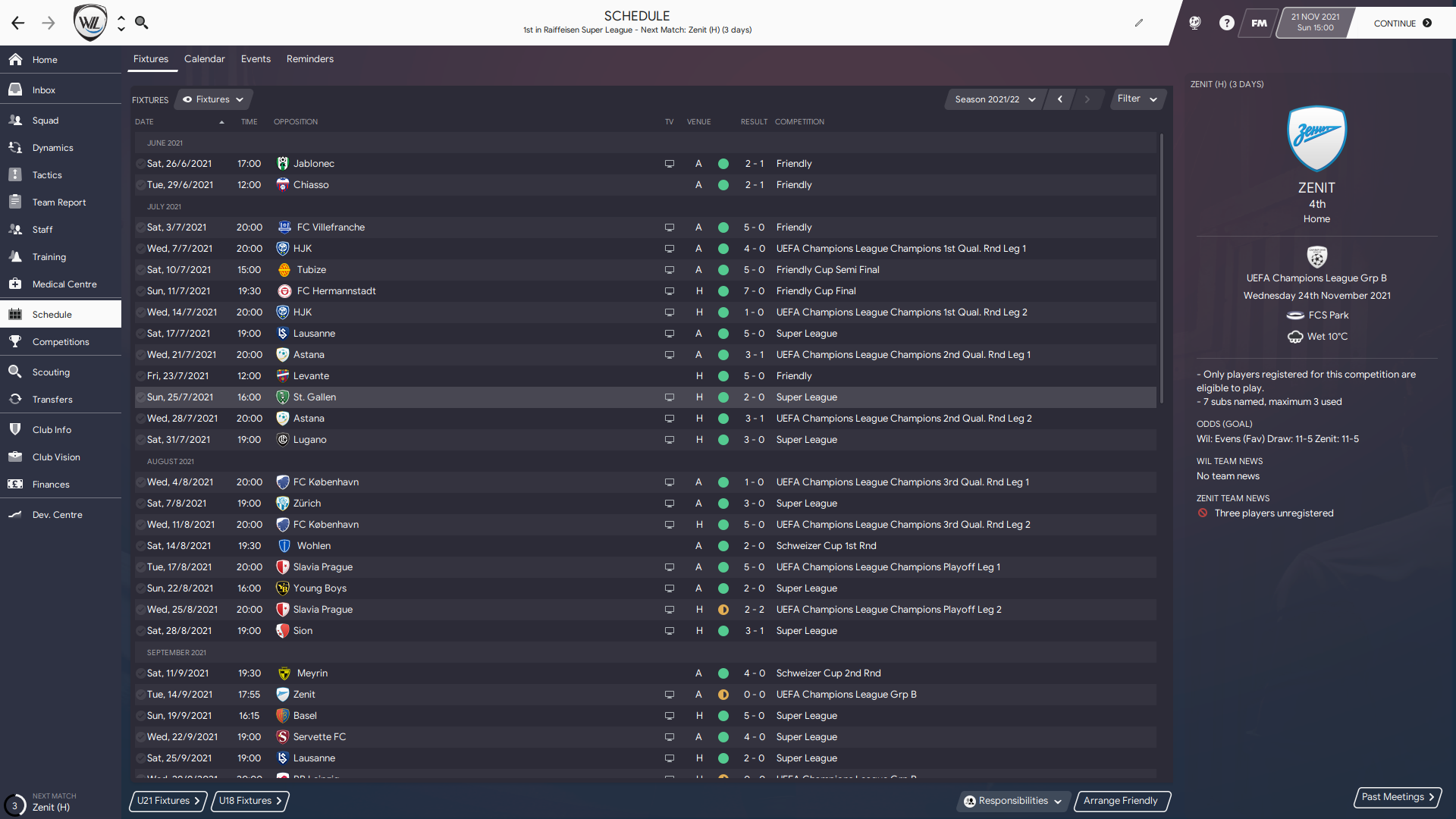 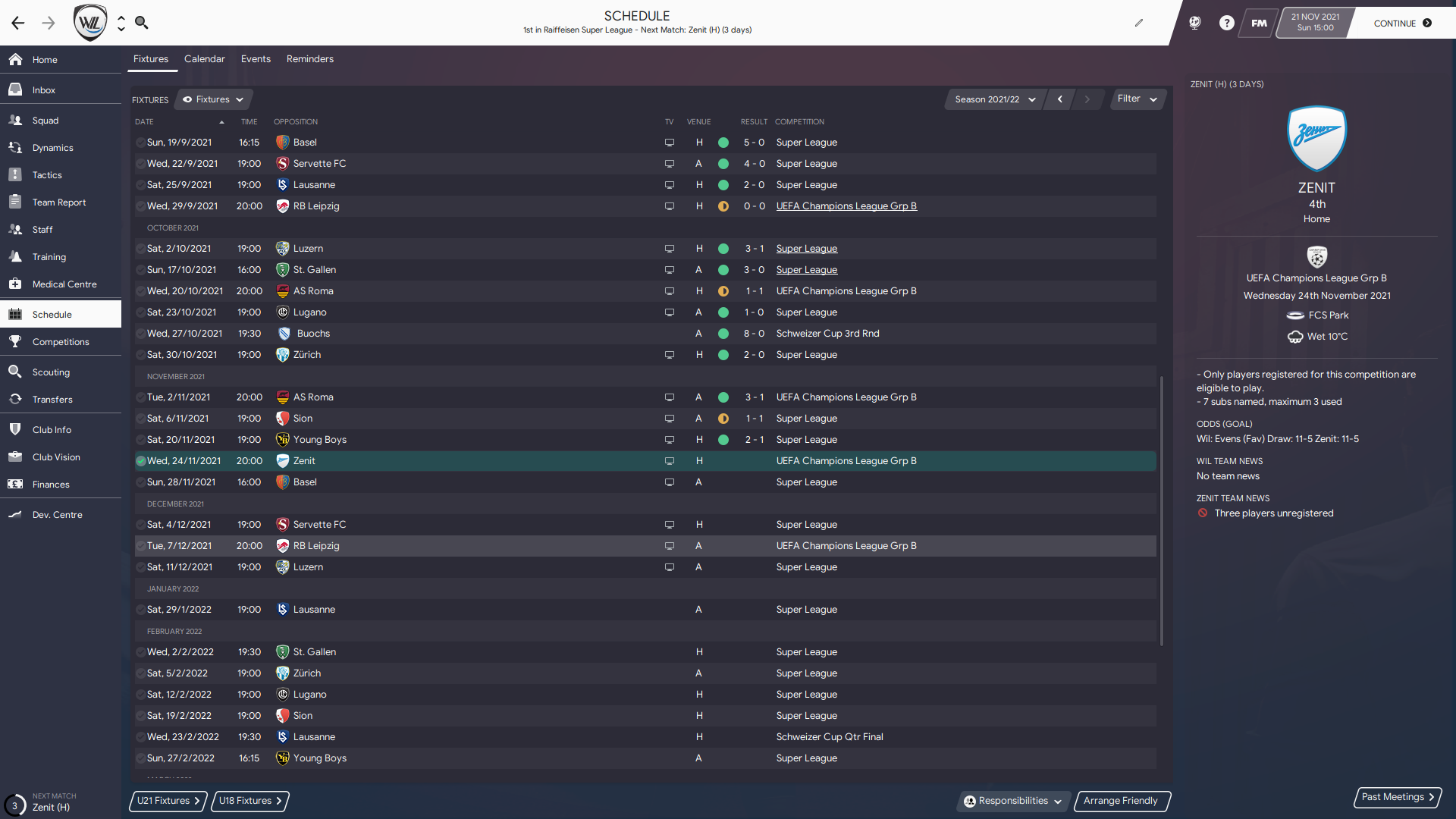 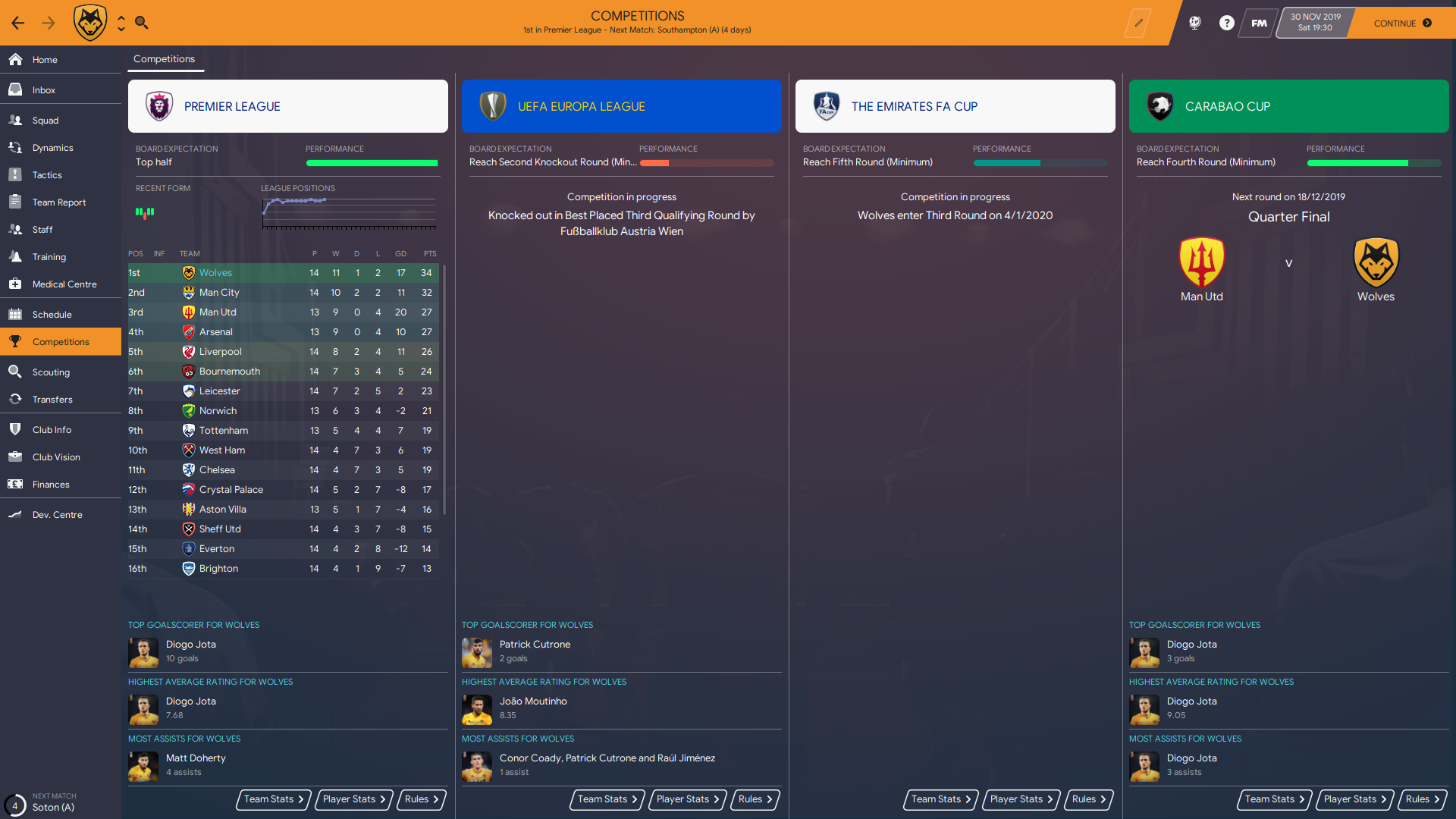 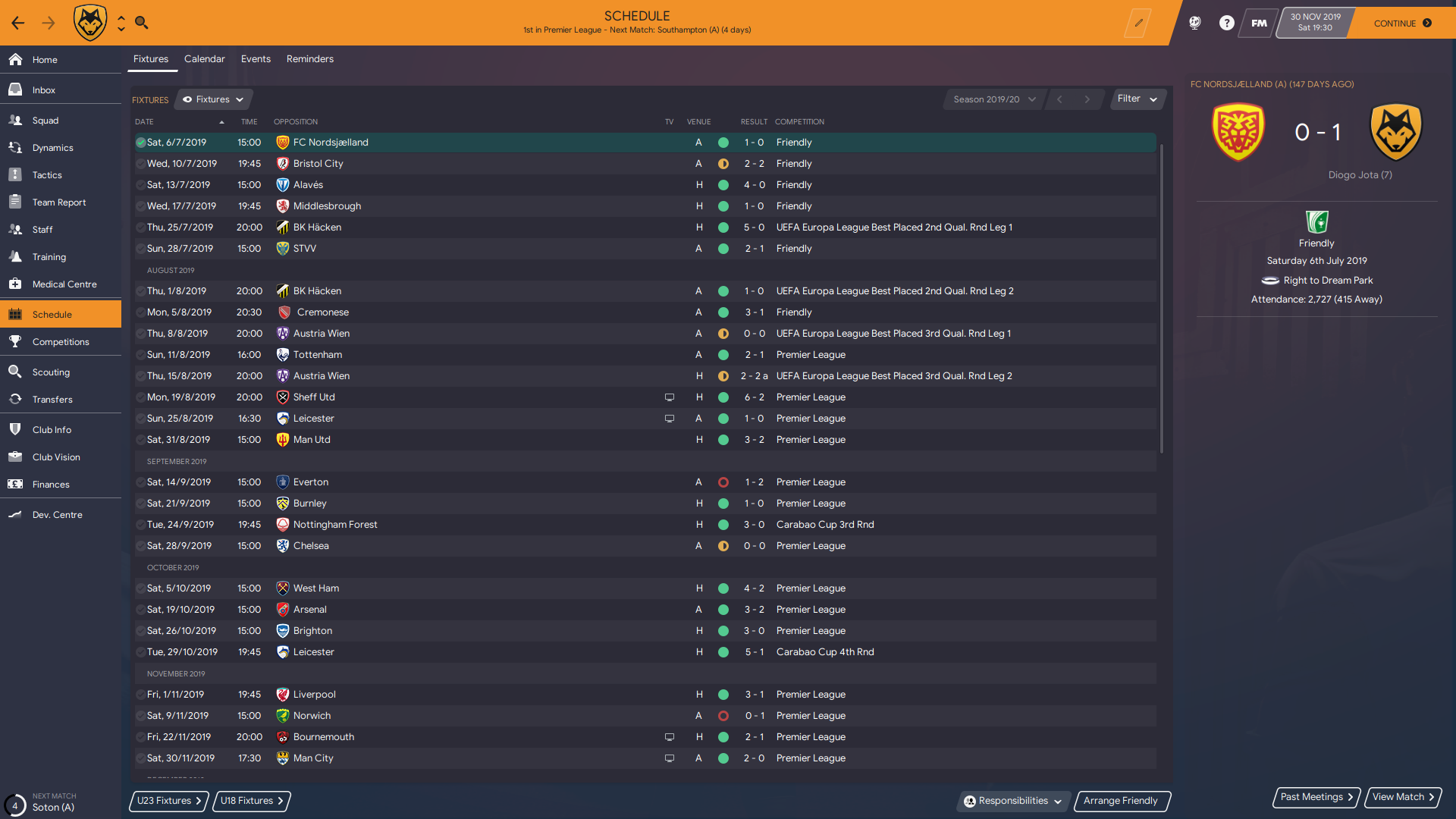 Check out this video on Streamable using your phone, tablet or desktop.

Thanks for reading! I still use this tactic regularly so I'll update as needed (match engine changes, etc). Happy to discuss feedback and help anyone trying to mess around with it!