This tactic is still unreal.

So I implemented it 2/3rds through my Dulwich Hamlet save. Long story short, we're in the Championship, we'd just missed out on playoffs (by a point) and this was our second season in the champ. We'd sold a couple of players for big money for the first time ever, so we had a little more money. We were hovering just outside the playoffs when I put this tactic on and we raced to a 3rd placed finish. I'm convinced we'd have got automatic had I found the tactic sooner. We lost the playoff final 1-0, which was disappointing (particularly as we SMASHED Watford in the semi 3-1 and 5-0).

This season, the premier league went WILD for many of my youngsters - I was forced to sell 3 of my best youngsters, and a couple of decent others (god **** minimum fee release clauses) - but we made 75 million (!!). Huge for our teeny tiny club. So anoooother rebuild (33 million spent!!) and all of a sudden we're favourites to win the league.

Which brings me back to the tac.. errr.. wow: 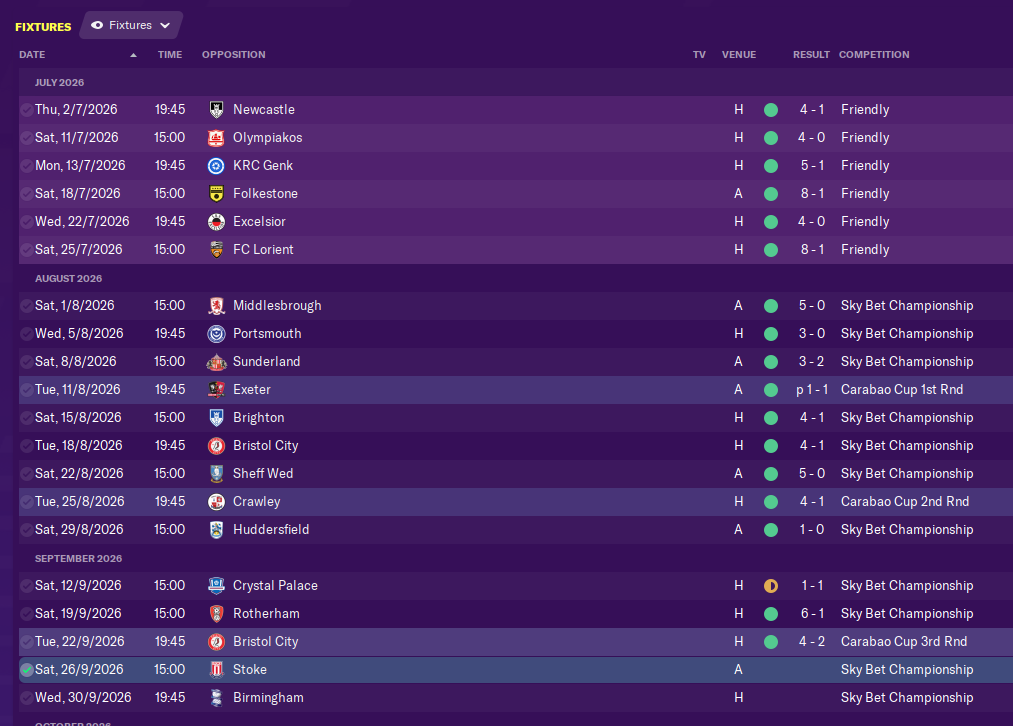 What a start. We're flying. We're going to win the league. I've said it before, I'll say it again.. this tactic is the bees knees.
Reactions: fc.cadoni and mcotton

Looks amazing results! Every time you upgrade to better players, you will have better results and you will see beautiful football.

Happy to see you have successful results!

Goal scoring potential looks good. In the Milwall sim he went on a run of 1 win in 12, if a human player was in charge would probably recover sooner and with micro-management maybe end up in the auto promotion spot who knows.
Reactions: fc.cadoni

Micro-managing is the best way to play the game and you can have better results with an X tactic.
Reactions: Jbthre

very good tactic, finished first with Napoli Mertens scored 47 goals as AF (the save crashed will try to load again tonight for screens)
Cadoni - who takes Free kicks corners and throw ins, most goals i conceded are from counter when my team takes attacking corners and throw ins
Reactions: fc.cadoni

Thanks for using it! Hope you like it as well!

Set Pieces is not my best area, there some room for improvement.

If you find other SP routines, please go use it and tell me!

Currently I am testing a second version with updated set piece (only). If I will see an improvement; I will update it here.

Early Test: I can't solve the indirect free kick issue, I have tried every possible combination. Seems like you will receive less when you have taller players there.

Read the rest of this update entry...

- If you have any success, please let me know!

- If you have any success, please let me know!
Click to expand...

CeeJ said:
Soo...What is this?

The new is OEDIPUS II.

I have attach the old one in case someone missed or want it.
C

The new is OEDIPUS II.

I have attach the old one in case someone missed or want it.
Click to expand...

Second version, contains only Set Piece update and nothing else.

Scoring more goals from corners, concede less from there; but most important is IDFK. Maybe I have found how AI scores from there so often and did the same.

It's a little boost, not focusing on Set Piece (which is the case in FM20). I hope you like how your team plays with this 442.
Reactions: CeeJ
N

Stevenel said:
HaHa Nabby is posting the same results on every posts ! xD
Saw on 3 other tactics threads :

Is this why I got banned by admin for a week???

If so had it not occurred that I have a test file with 4 teams saved and I plug a tactic in and then run the holiday test. I certainly wasnt spamming considering the results were different.
Well done those moderators of the forums.....comedy gold.


I have tested version 2 of this tactic...again with a 4 team save file I have for Sheff Utd/Derby/Hertha Berlin/Valencia, results below

No cups, but Derby lost FA Cup final to City

And admin, if you see the same teams used in another, dont ban me this time....
Reactions: Jbthre, Stevenel, White Europe and 2 others

Hi, your tactic is working well in my save with Schalke. One question though, what should I do when down to 10 men?
A

what does everyone use for tactical briefings and touchline shouts? they are relatively new to me. i ignore oi's and let *** man do team talks but still not sure how to get the best out of the 2 things i mentioned

IggyBug said:
Hi, your tactic is working well in my save with Schalke. One question though, what should I do when down to 10 men?
Click to expand...

Thanks for using the tactic. Hope you like it!