So to catch up. I started this save as manager of Polet Glogovnica, 8th tier side in Croatia. Got a lot of players above my level and got promoted every season up until the 1st league, 1. HNL. The road was fun and not tough until the 3rd and and the 2nd league. I brought the club to a state I didn't think I would be able to when I started. I made players that played for the national team, one of which you'll hear a lot about is Domagoj Muzek, a striker I got on a free from a 3rd league side. He scored 30+ in my 3rd league and 2nd league campaigns. And his partner Domagoj Brigic, a very good winger/striker who came from a 4th league side got amazing numbers too. I kept a few players that were there since I started like the first ever captain, Leon Ralis. Not a good CM but he was the first and only captain I ever had while at Polet. I started to become a professional club in my 3rd season, i was then in the 6th tier. I got some money from winning my region cup 2 seasons in a row and decided to become a professional club and was able to keep my players as no one at that level was paying their players. So that's one of the main reasons why I was able to just get promoted back-to-back-to-back, etc.

Screenshot of Muzeks profile near the end of my 2nd league campaign. 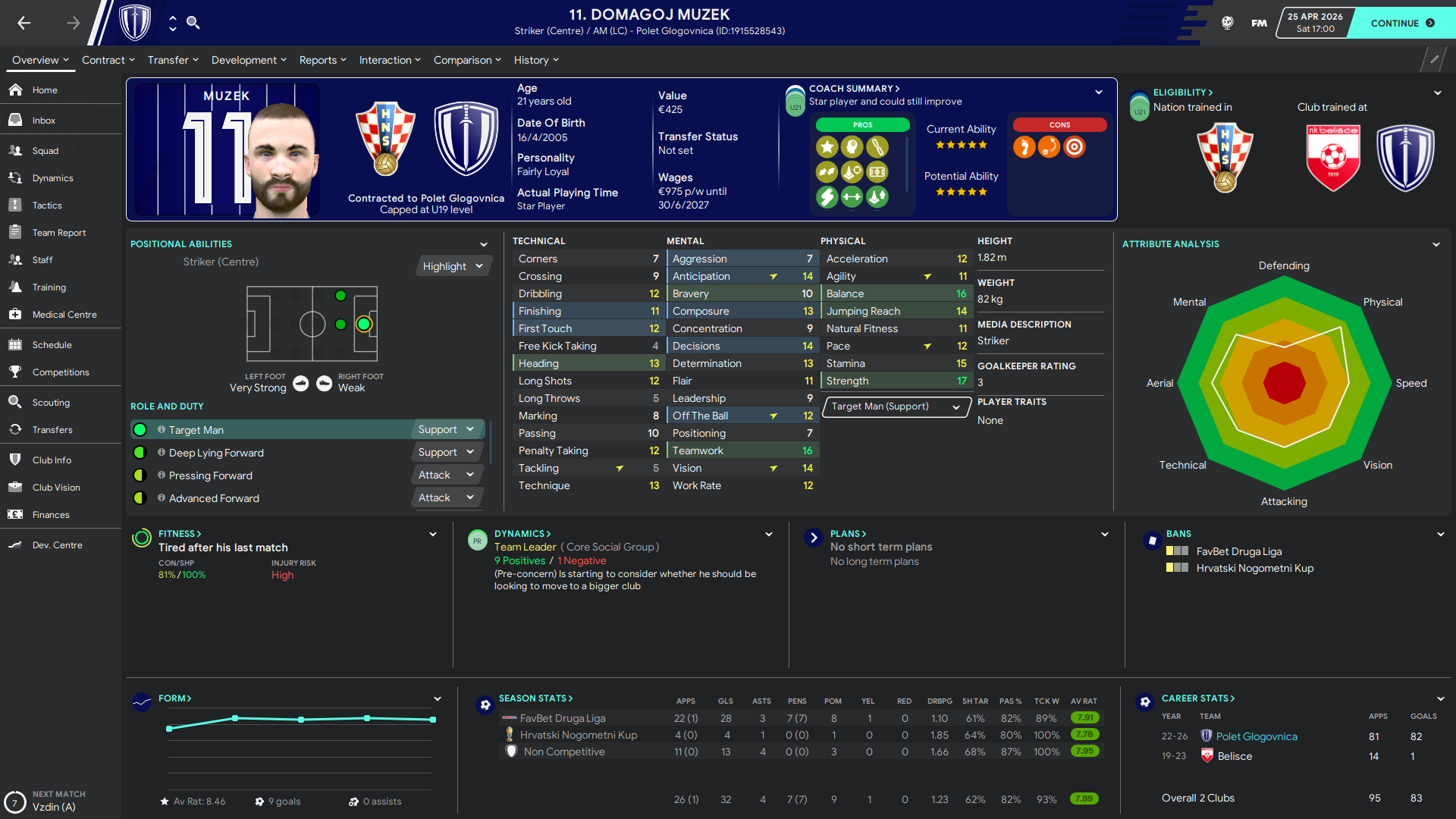 After winning the 2nd league with a great battle with Varazdin and taking the title by just 3 points. Heading into the top Croatian league I was optimstic. Muzek wanted to stay which was a big plus. Morale was high, 4 new players who improved my defense and was looking forward to the start of the league. I started the league off fairly well as a new team. Getting 12 points from my first 10 games, doesnt sound great but I thought it was ok. But after that it started getting worse and worse. I ended up going on a 9 game winless streak heading into the winter break. After the winter break and only one signing the league started again. And the board gave a challenge, 5 points in the next 4 games or you are out. My first match ended in a 2-2 draw against Dinamo. The league leaders, I was buzzing and thinking I wont get sacked. Next match, Slaven Belupo. Mid table side but in the 2nd half my RB gets sent off and I lost 2-1. I need 4 points from my last 2 games. Up next HNK Gorica. If I lose thats it. I need a new club after 7 years of work. And surprise surprise I lose, making it impossible to get to the set tally of points. I get sacked...(Will continue later, for now here are some screenshots) 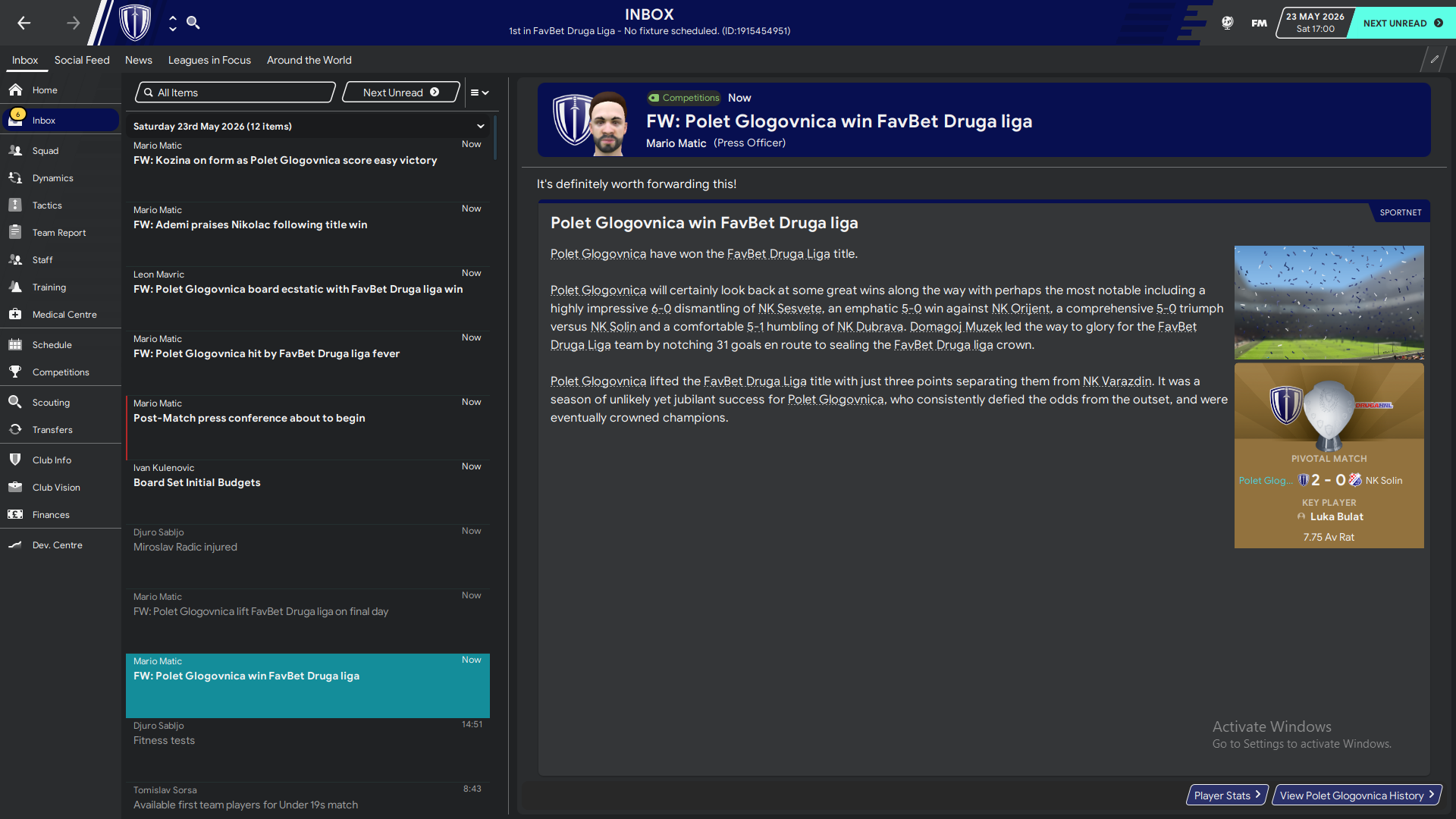 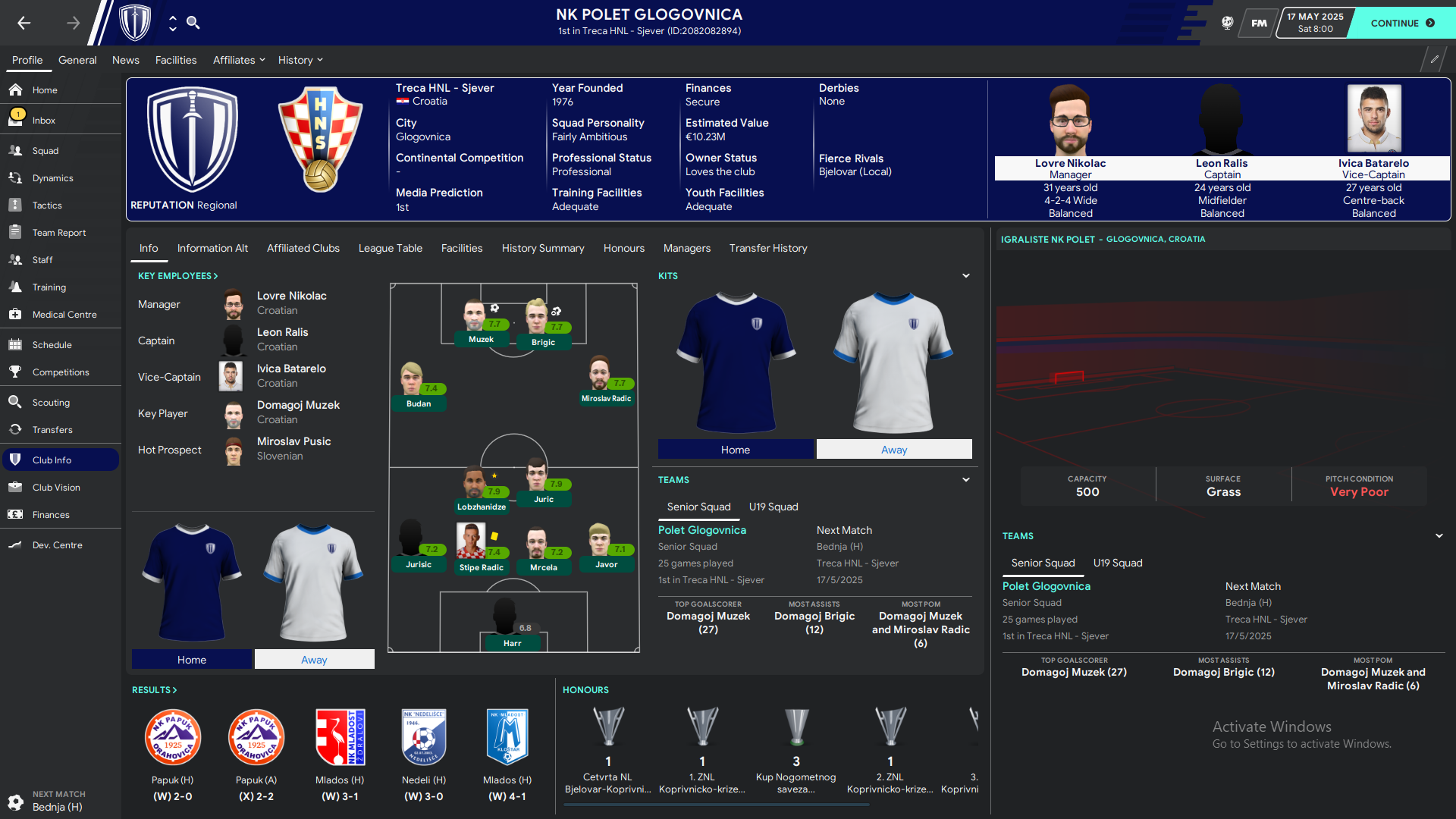 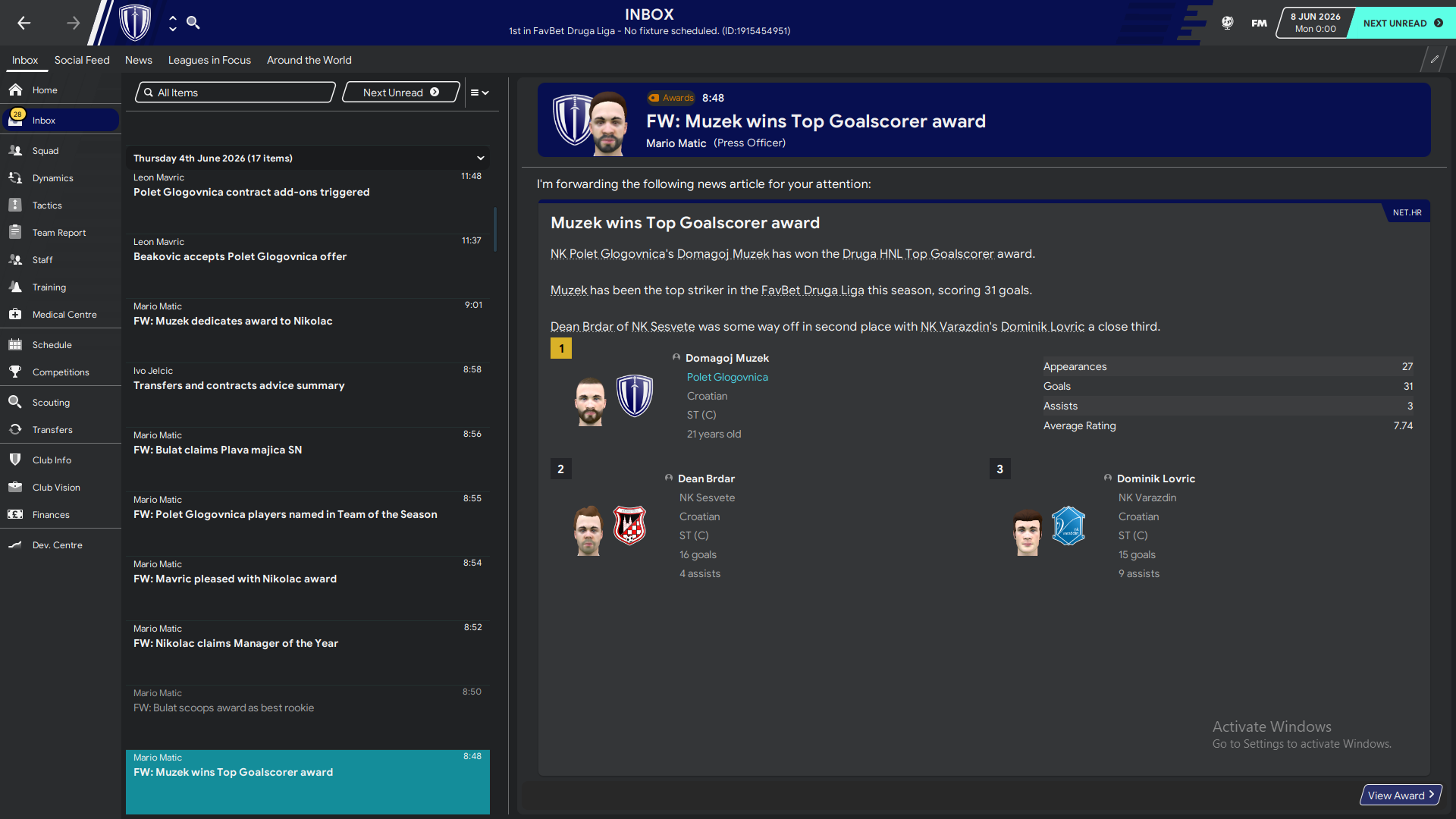 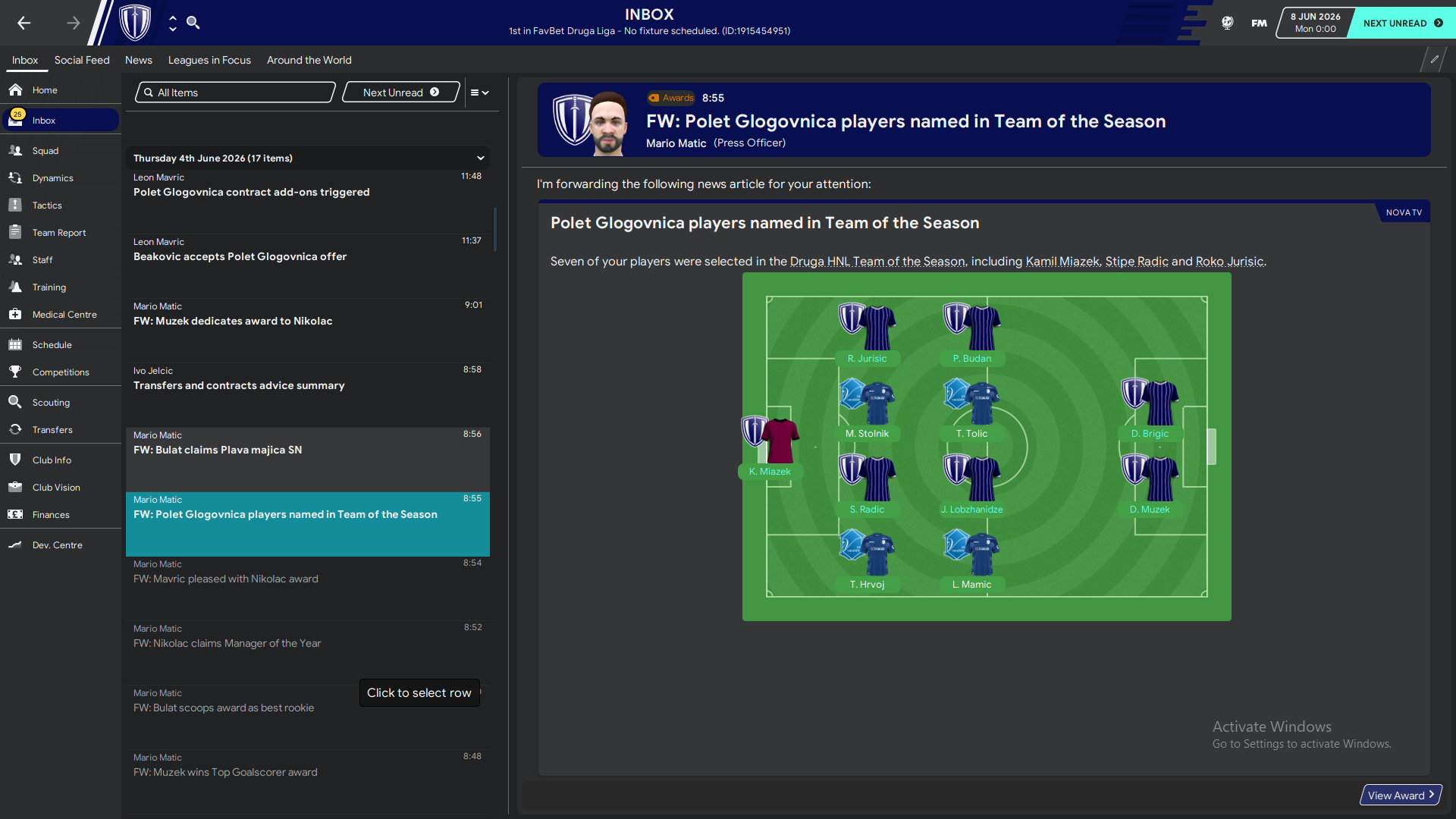