Most of you have probably heard of this challenge before. Named after the geometrical figure (not the building) with five sides. This challenge have you travel all over the world to challenge other teams for their regions biggest trophy. That means you have to win the following cups:

Before I start on strategy one thing you need to know is that a Pentagon is a challenge that’s hard to plan. Like most journeyman saves it is dependent on what job openings you get. But the teams you have a good shot at winning the cups with may not be available because of your reputation. So at times you have to be creative and take a job just to increase your reputation like a national team job or a team that are possible overachievers. But in the next few paragraphs are my recommendations.

If you start with low experience you usually end up in South Africa which is the only league to manage in in the original game from Africa. You get close to one of the bigger trophy’s with a 2nd tier team because of the low reputation the league has. In the bottom of the other leagues you are hampered by the bad economy in those leagues. And the bigger teams are very dominating comparing to South African teams in which are more equal. Of the top tier league South Africa also is the league with lowest reputation that has a decent chance of success. Egyptian teams are your biggest enemy here but you can with great focus and smart play overcome this. Look at their tactic and strike at their weak spots. In most cases a defensive-minded tactic and counter attacks.

Next is usually North America. Find a good team in either Major League Soccer (U.S.A) or Mexico. Almost the only possible teams to claim the North American Champions League. I would give Mexico a small edge for simpler league rules (by far) and the teams are slightly stronger than their American counterparts. CD Guadalajara (Chivas), America or Cruz Azul are good alternatives. CD Guadalajara only uses Mexicans so you can’t buy foreigners as special rules for the team. But if you go to the MLS New York often has a decent team to start with. Los Angeles has a very good economy but league rules makes it harder to use it on more than 2-3 designated players.

Asia could also be your 2nd choice but to get a good team in Asia going to North America first is better for the most part. In Asia look for China or South Korea. They have great teams and they are wealthy most of them. You can strike gold and get Guangzhou. They are by far the richest team and many of the best Chinese players usually end up there. Shangdong and Beijing are good alternatives. Seoul is your best bet in South Korea with a good mix of good players and budget. I would consider them 2nd in both. They also has the best facilities in South Korea so by the time you get there they should has decent players coming through the ranks. Ulsan has the best economy so they can be a good choice. Suwon usually have a good team by the time you get to Asia. Before choosing a team from another league check if they are eligible to play in the Asian Champions League. As Asia have three development stages which make it impossible for some teams to qualify. Teams from Hong Kong and Singapore only compete in the Asian Confederations Cup and not in the Asian Champions League. They can however be used as a stepping stone to the bigger leagues.

Next is usually South America with Copa Libertadores. Brazil dominates this competition with the exception of a few Argentinian teams. If you get a middle of the table team in Brazil you have a better chance of qualifying and competing in the Copa Libertadores then their counterpart in the other South American leagues. The league are more even and players are attracted to more teams. They also have a very lenient loaning policys with many teams have built half their teams with players on loan. Brazil also has many competitions which can go in your favor with focusing on the league and then the Copa Libertadores. While your rivals have focus elsewhere. I could recommend a few teams from Brazil. Corinthians, Sao Paulo, Flamengo, Cruzeiro, Internacional and Santos all can go for the championship. But half of the first division have a chance to qualify for the Copa Libertadores. In Argentina you usually have to get a job with one of the biggies. Like Boca Junior, Velez or Independiente. River and San Lorenzo are two other choices.

Last is in most cases is Europe as you need a great team to be able to win the Champions League. England, Spain and Italy is the safest choice. Many good teams there. Germany is another good choice but you often need to coach Bayern Munich or maybe Dortmund. Europe has better chances to get a smaller team to win the Euro Champions League than any other of the regional competitions. Economy and the endless possibilities of tactics makes this possible. Especially teams from England has a good shot a this.

You join me towards the end of my first season as a manager.

Starting off unemployed in South Africa I soon got my first job offer (from a team I've never heard of), Tshakhuma.

With a team predicted to finish fourth we have quickly exceeded expectations as we go toe-to-toe with Ajax Cape Town in the race for the title.. 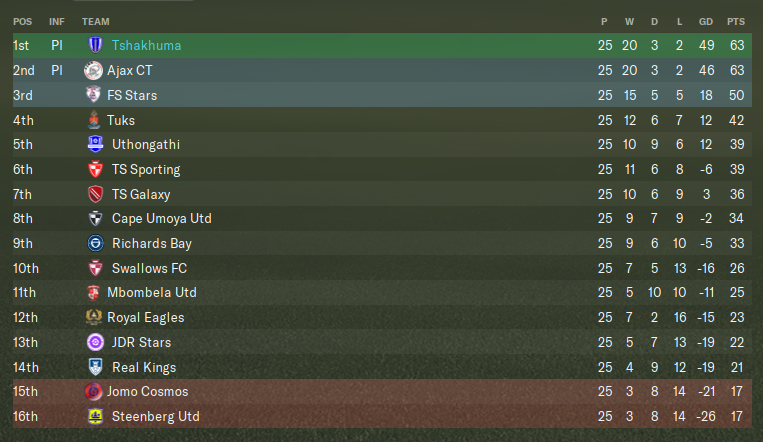 Next up was a key clash between the top two... 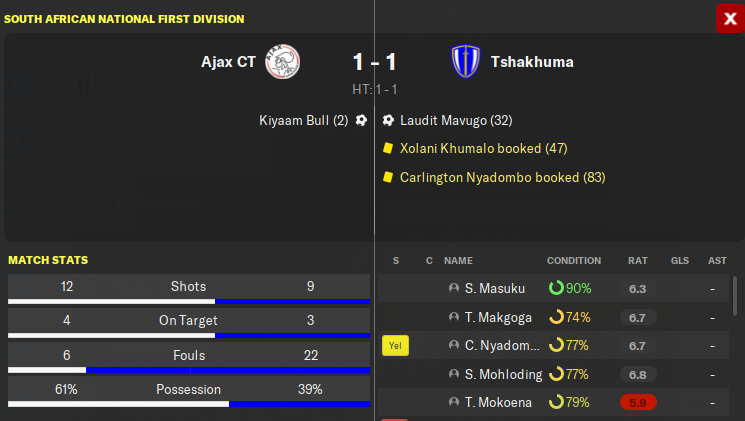 With only two games remaining one of us blink...

With us at home and Ajax CT away I went into the final day confident of securing the title (and more importantly promotion).

However I had no fingernails left by the end of the 90 minutes!

We were cruising and it seemed inevitable that we would take the lead. That was until we had a midfielder sent off shortly into the second half.

Still 0-0 going into the final minutes and with Ajax losing 2-1 at the time we seemed like we could relax but two late goals from Ajax blew the title race wide open.

If our 10 men conceded now the title was going to Cape Town.

Thankfully we held on!

Our outstanding season didn't go unnoticed as I was headhunted by Bidvest Wits who finished 3rd in the top division. 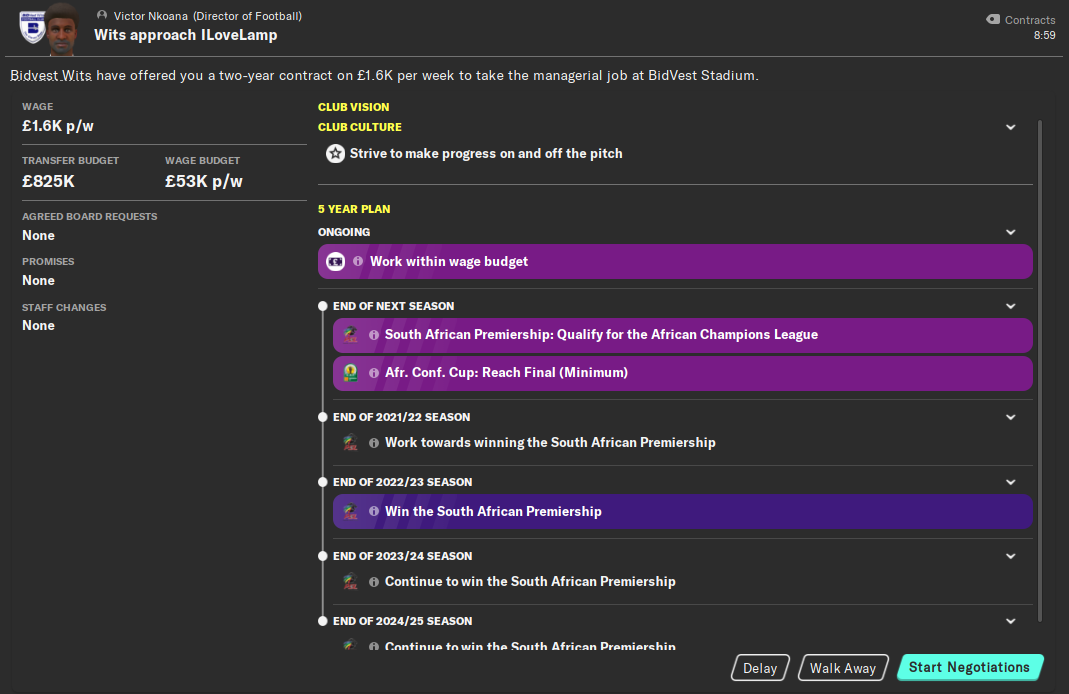 The wages, transfer budget and prospect of qualifying for the Champions League are too good to turn down.​
Reactions: Lewis34500
I

Such is the nature of the South African league we had little to spend in the summer and so we enter the season with virtually the same team that finished 3rd last season.

We start well enough as the team gels to a new tactical system... 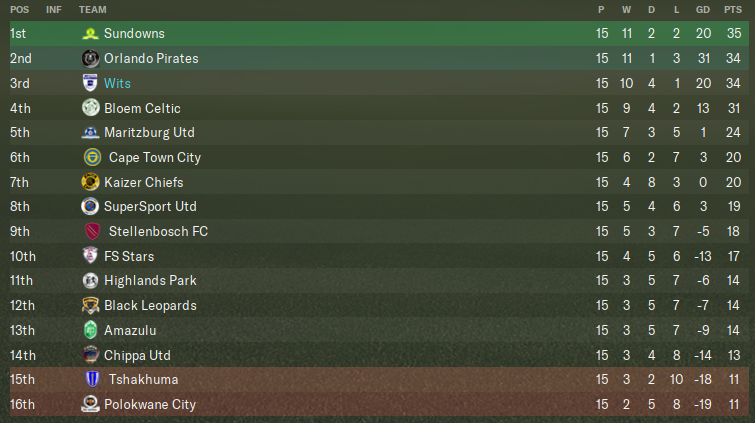 Before the year is out we reach a first cup final in our fledgling managerial career...

Sadly it doesn't go to plan... 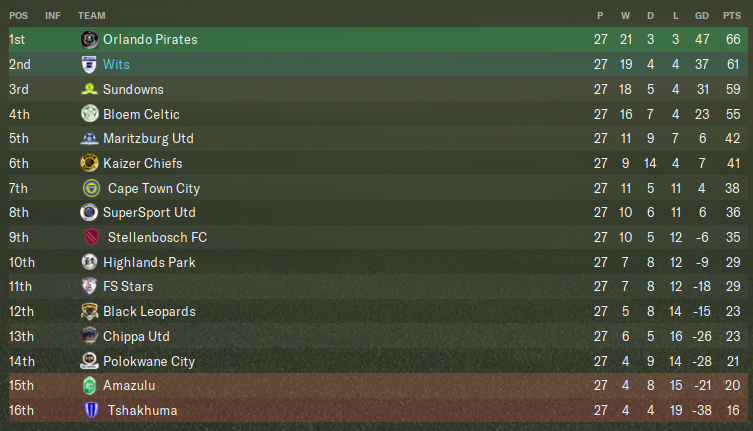 We continue with a solid season but it looks like Orlando Pirates may be too strong. We are running up hefty financial loses so we can close the gap to them by getting the chequebook out. Some old fashioned football management is needed. 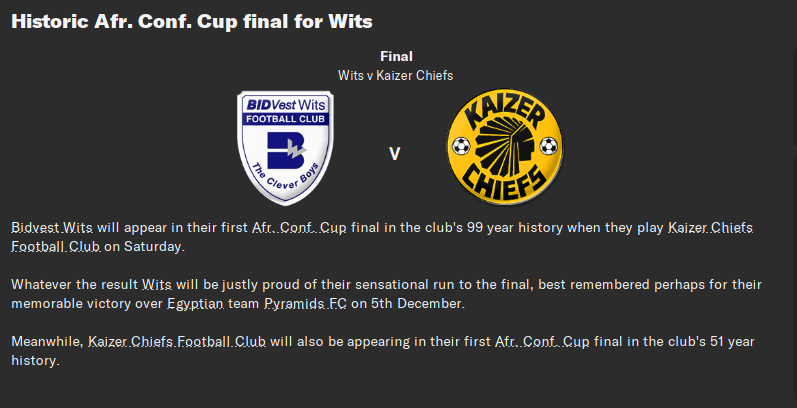 This is basically the African Europa League. Onsviously the name of the game in this career is to win the Champions League but its little brother would be a good way to start... 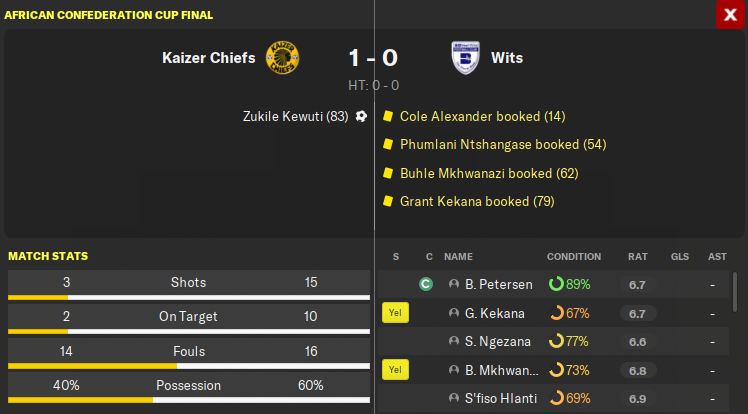 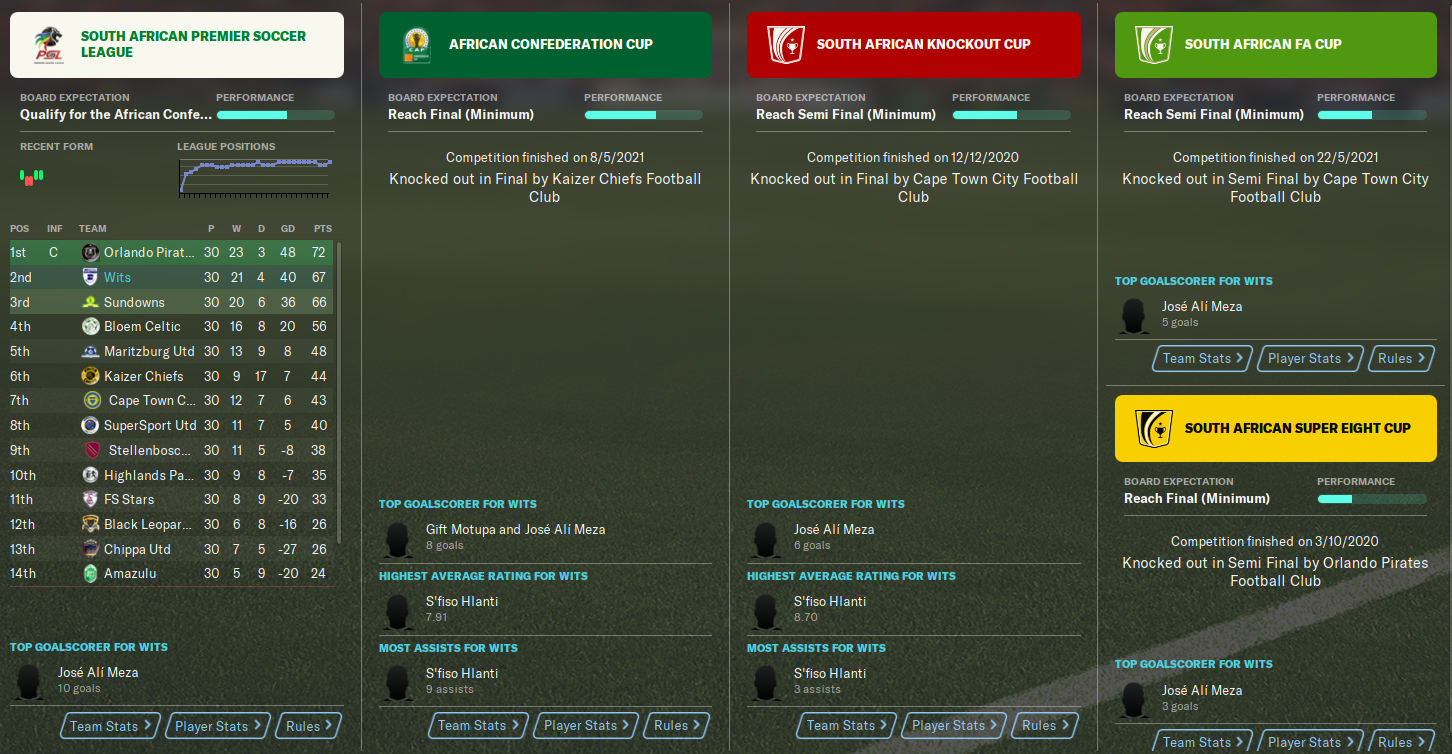 We qualify for the African Champions League next season but fail to sustain our title challenge, not helped by having to sell our top goalscorer mid way through the season to China to ease out financial situation.

The Champions League should boost our finances next season. With one or two good additions we should be challenging for the domestic league and Africa's biggest prize.​
I

The Champions League qualifier was interesting....
​ 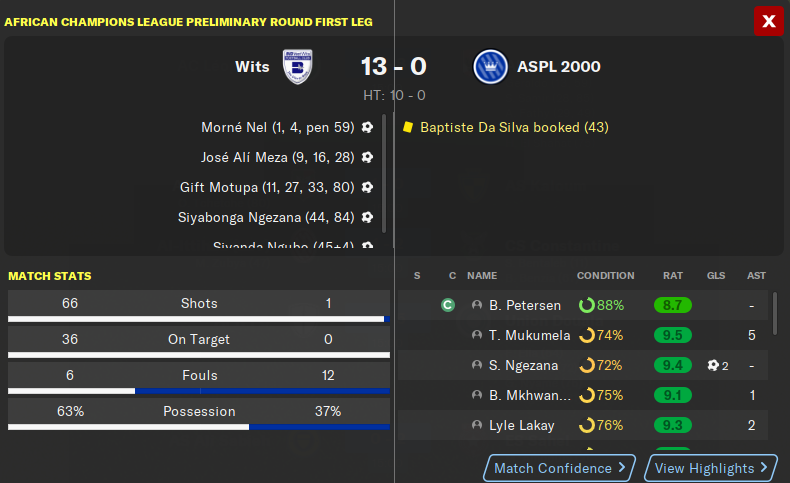 We eventually won 19-0 on aggregate.

I was developing a bit of a cup final hoodoo but we finally bag our first domestic cup as a manager...
​ 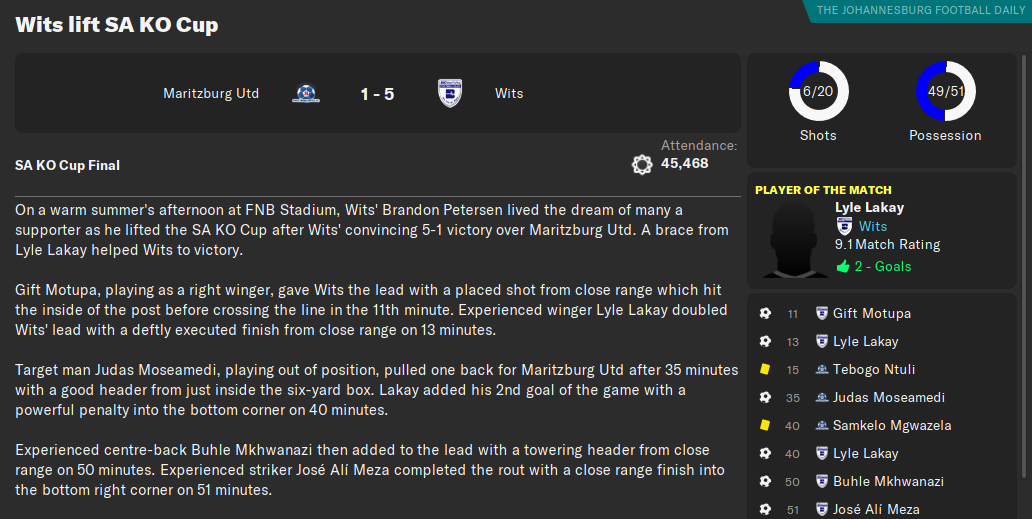 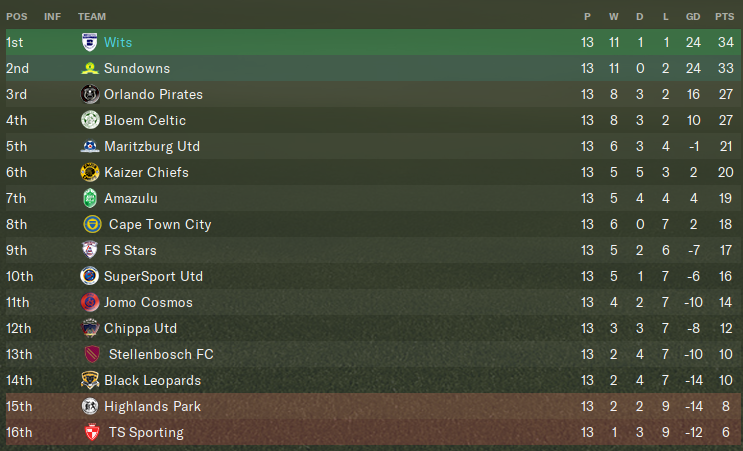 I will be following with interest.

Imagining a Scottish side called Highlands Park - would work lol
Reactions: ILoveLamp
I

We cruise through the group stages. Could have played the reserve side in hindsight! However we have had to sell our best player to China again to bring some money into the club. He didn't want to sign a new deal either. Hopefully we don'g 'gift' our rivals the title ​
L

Just found this thread, loving it so far!
I 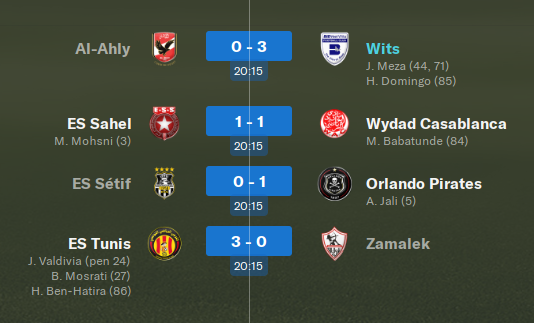 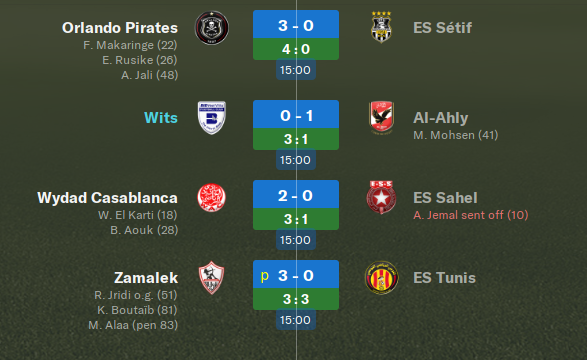 The quarter final was effectively won after the first league.

The semi final was end-to-end. Might have been more comfortable had we been able to keep 11 players on the pitch! 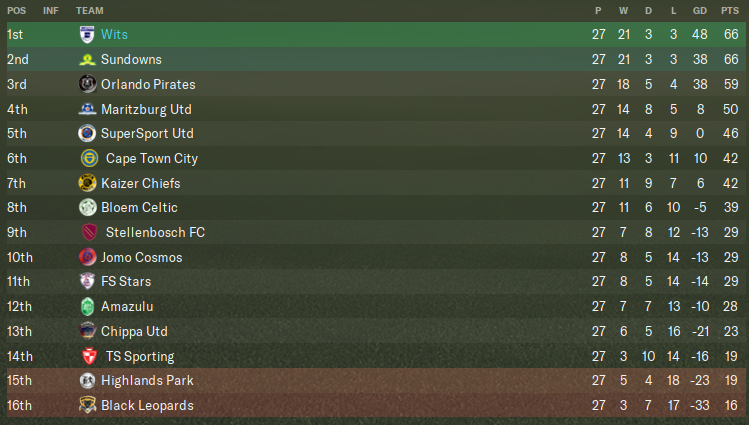 Despite falling behind very very early we were much the better side but took an 82nd minute penalty to finally draw level.

However Orlando hit us with an injury time winner to clinch the Champions League. The first part of the Pentagon must wait..​
Reactions: Lewis34500
I

Despite our CL final disappointment, we can't cry in the corner as we have another final to play and against our main domestic challengers this season.......... 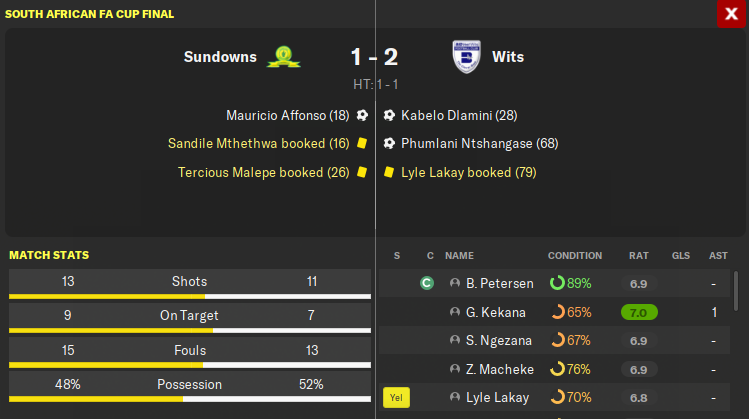 We get one over Sundowns. Can we get the big prize though - the league title??