Download
Overview Updates (1) History Discussion
At the start of a new season I wanted to experiment with a new tactic, something creative that I don't think a lot of people have thought of using. I started with a basic 4-2-3-1 and thought I should try to drop down the two midfielders as DM, and play at least one of them as Segundo Volante on attack that can push up further up into the midfield and cover that open space and connect to the attackers. After some experimentation with DLP(s) and VOL(a) I decided to just play both of them as VOL(a).

I also thought, what if I push up the wingbacks one notch to help recuperate some control in the midfield, as I've noticed they will still do a decent job of defending even if they're higher up in the formation. I left these on support as I don't want to be exposed too much in the back. The Volantes and Wingbacks will push up and drive the ball up the field together from the defense up the field to the attacking third. They also serve as a secondary high line of defense while my Centre Backs are the emergency defenders. I noticed that this tactic is a little bit vulnerable to very direct and counter-attacking play on the defense.

After experimenting with a AM(C) I decided to swap him out for another Striker so I have more goal-scoring threats, as I had good strikers on my team and no AMC that can play shadow striker well. I also decided to use my wingers as inverted wingers to help recover some control over the open space in the middle of the field. The four attackers swarm the attacking box while the volantes and wingbacks surround the opposition penalty area, creating very dangerous overloads.

I've had great results using this tactic, and I noticed that there is no tactic using this type of formation in the tested tactics database so I thought it might be a good candidate to see how it fares against other competitive tactics on here. 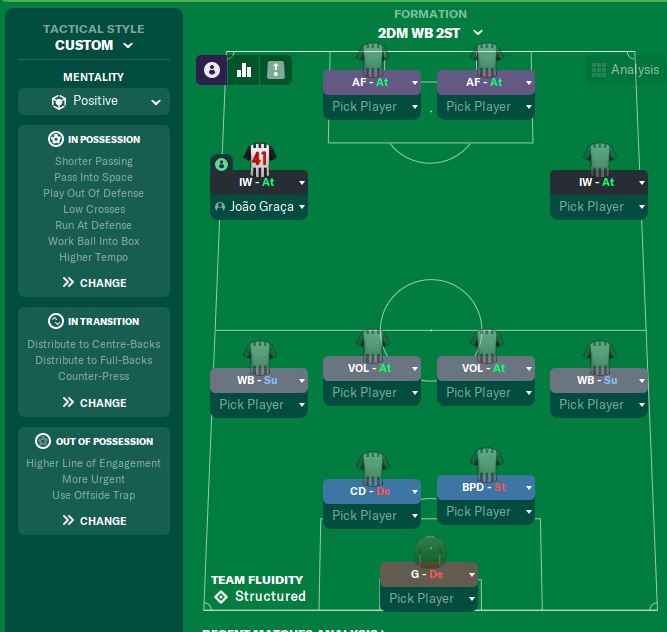