Download
Overview History Discussion
A tactic I designed in FM 2020 to run with KRC Genk,
A young pacey creative team. With the correct acquisitions I was able to literally run the league year after year.
It took me a couple years to challenge the likes of Liverpool and PSG but we got there eventually.
I basically had an overload of midfielders and strikers. and this fit my needs
The one problem with this tactic is that you want PACEY wingbacks with crossing ability.
Most play is focused through the middle but once the ball goes outside we want it given to our strikers.

Players:
AF: Basically our main scoring threat.
CF: Secondary striker and preferably tall. He's our more advanced target man Either head the ball in or provide to the AF.
AM: our longshot threat but also our main feeder into the box. On set pieces he'll be our edge lurking player.

Mezzala (Support): Left side to soak up some of the gap that the AF(Attack creates), will create some players on the left and draw players away from our attacking threats.

Mezzala (Attack): Right side pushes up a bit higher and creates an overload on the right side of opposition hopefully pulling the wingback in so ours can overlap.

DLP: This is our main creative player. will go and get the ball when we are in possession, is the anchor for our counters and a force in the midfield. (Probably your most important investment)

WBS: Both of these guys should be pacey and have a decent crossing stat. we want them to run up the field around the wingbacks and just hoof the ball to our attacking 3.

CBS: Boring i don't trust ballplaying defenders until you reach the level of Virgil van Dijk so just do your job. Defend. They should be tall and can be other threats during set pieces / both on the attacking and defensive end.

Goalkeeper: Sweeper on attack. Always look for this guy to get the ball out.

The tactic:
I left the tactic on balanced because I tend to set the game to either cautious / positive based on the first 15/20 minutes of play. I recommend doing the same. 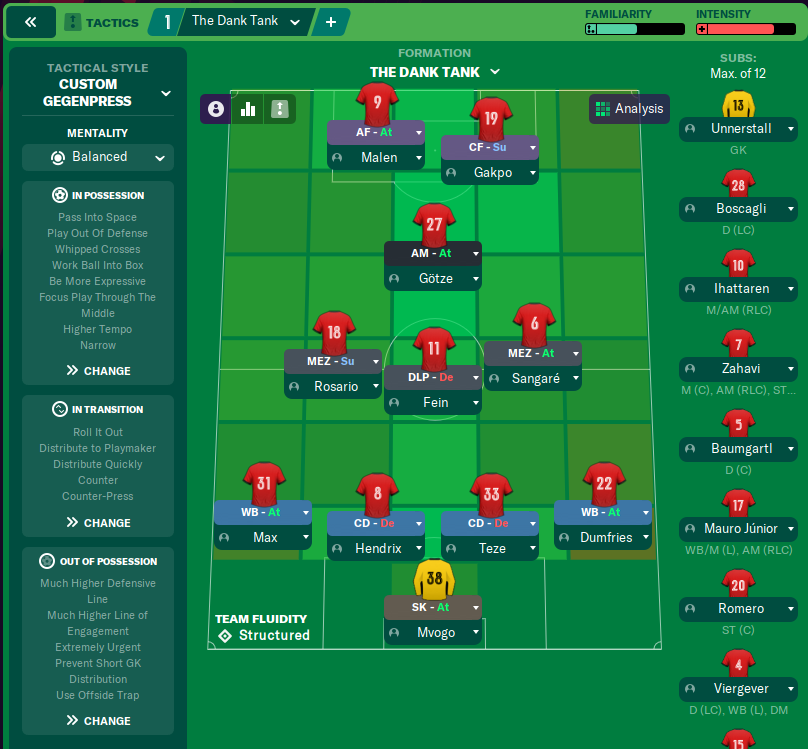 In Possession:
We play out of the defense, slow deliberate build up making their midfield work and keeping their wingbacks out of the equation. we use pass into space so our mezzala's can do their work. And finally we play a higher tempo and work the ball in the box to try and get the bet shot. If you have highly quality players I recommend removing work the ball in the box.
Potentially in lower leagues remove be more expressive. 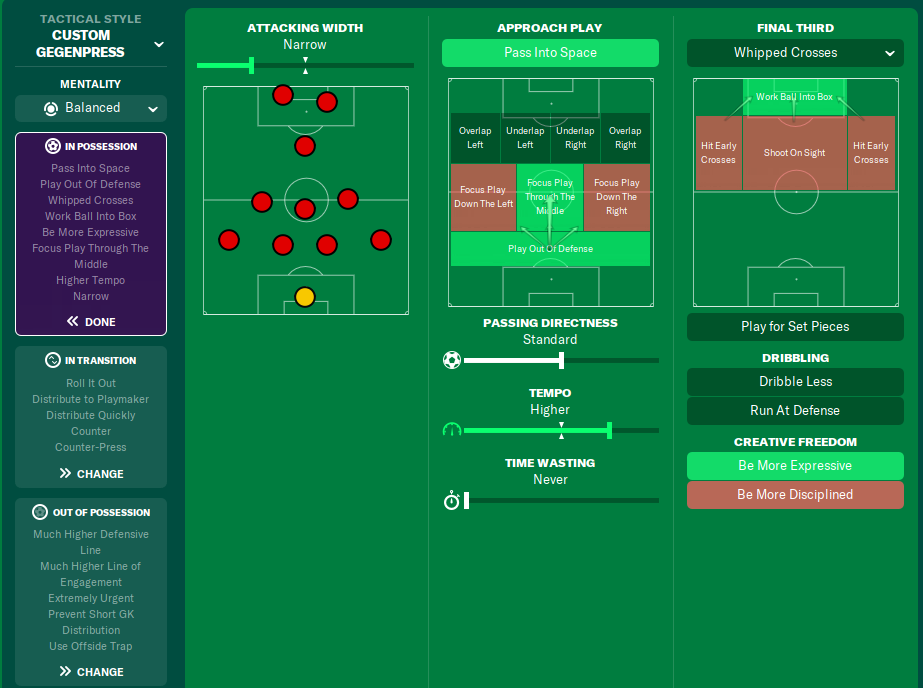 Transition:
We counter press and counter. We want to counter quickly and use our pace so we distribute quickly.
I don't trust ballplaying defenders so we distribute to our DLP. he'll drop down and come gather the ball we can then swiftly distribute the ball to our Mezzala's and get their creativity/vision do their thing. 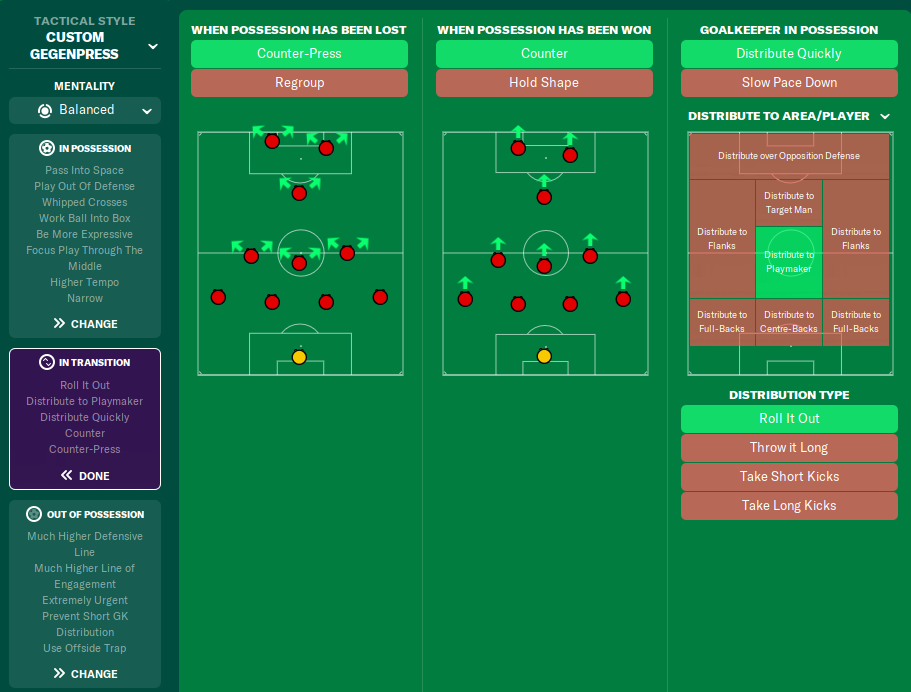 Out of possesion:
We use offside trap and push our lines up high. we have pacey wingbacks so we trust them to catch up if we have a speedster run past the offside trap. We put constant pressure on the keeper so he needs to distribute and possibly make mistakes. We have alot of pressure in the midfield so they probably will chose a wingback 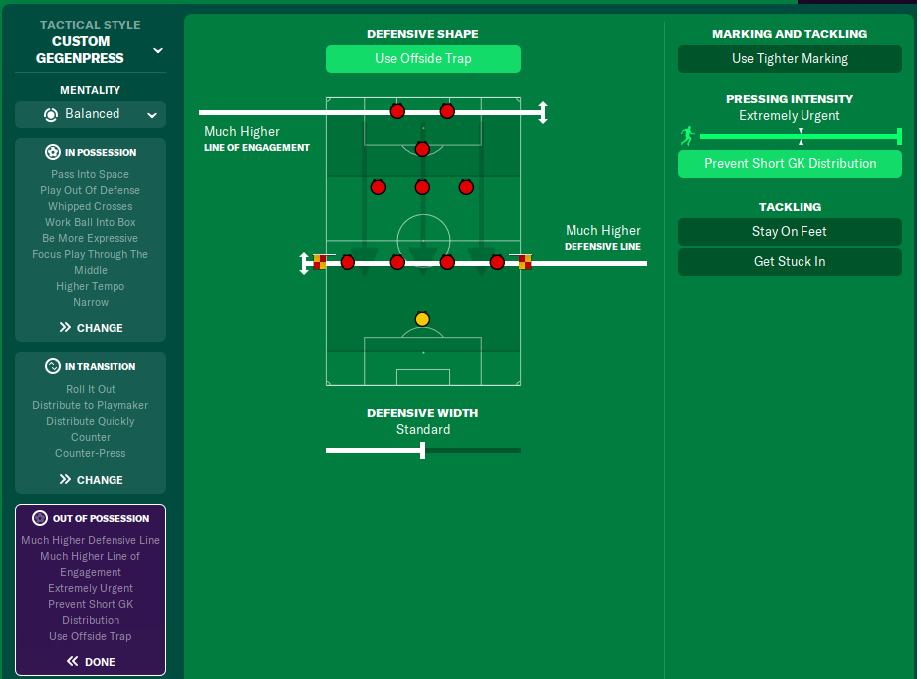 Set pieces:
I tend to keep the DLP back and one wingback.
CB's need to be tall and in the mix for a possible header.
Mezzala's can lurk at the area or just be bodies.
Our Attacking midfielder is our main edge threat, longshots could be a fun trait to have.