Download
Overview History Discussion
SCOFFER-BALL​
Hi everyone, This is my first time uploading some of my tactics so bare with me for updates / my presentation of my tactics.

Firstly, My inspiration for these tactics are from the manager of Huddersfield Town Carlos Corberan, I am a Huddersfield town supporter and season ticket holder and the philosophy he has brought to my team has taken shape this season. He served as the under 21's manager for Leeds United before joining Huddersfield the start of 2020/2021 season, And worked closely with Marcelo Bielsa for as number of years and you can see what inspirations he has taken from him on the pitch.

Due to injuries and playing staff Huddersfield have mainly used a 3-5-2/3-4-3 this season, but when able to do so they use an attacking 4-3-3 with plenty of movement, hard work, high tempo attacking football that I have tried to recreate.

I alternate between the below tactics in game depending on how the game is going, and will also start a game in either formation dependant on my scouts feedback, their weaker areas of the pitch or if I'm just on a good run with either of the tactics! 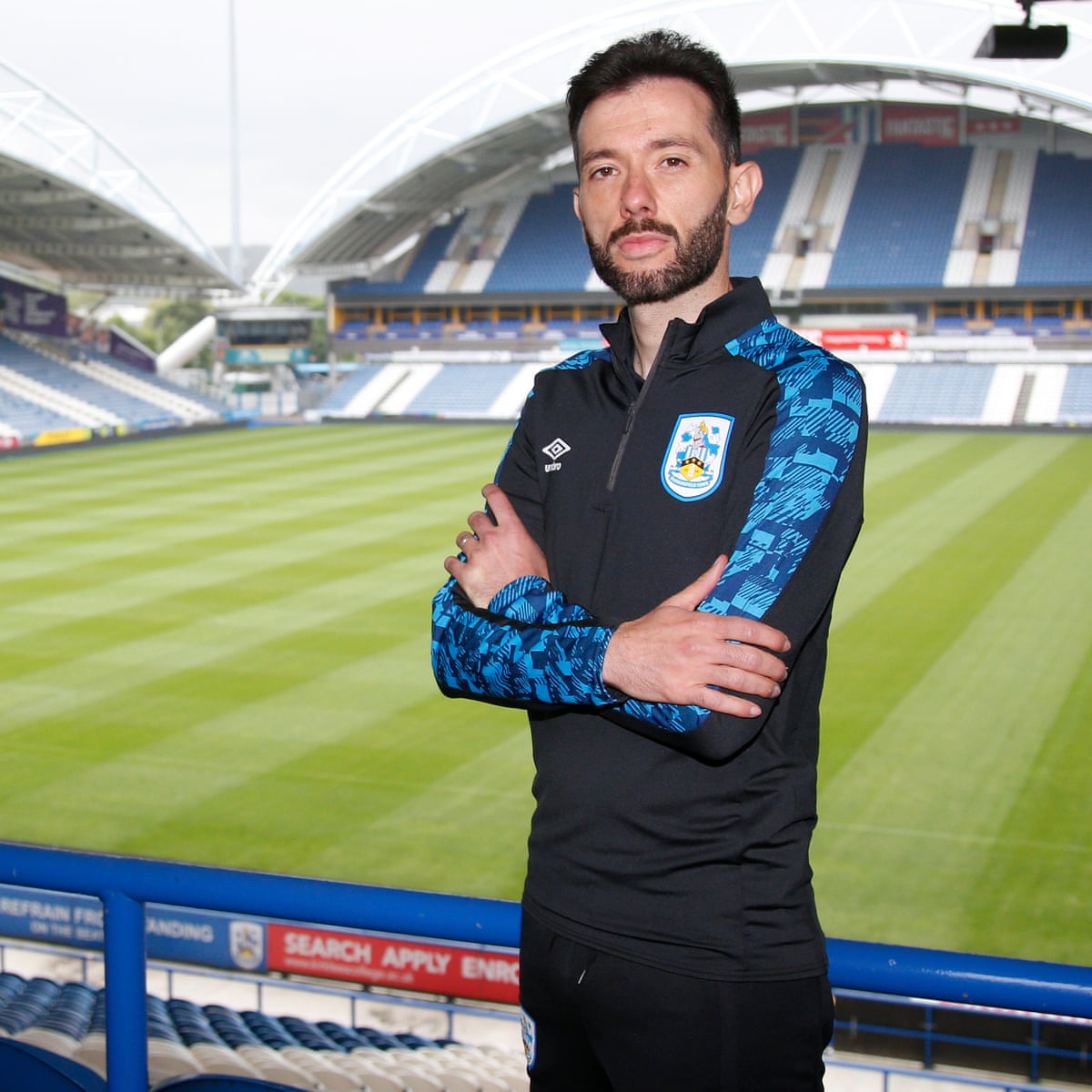 I have tested this tactics for 3 seasons now in a journeyman save starting at York, I won the title with York, but found the tactics struggled due to the quality of players I was using and also just generally not having the right players for the formation but this all changed when mid way through the second season in National conference was hired by Plymouth Argyle who were 17th in league 1. I managed to finish 1 place outside the play offs on the final day, and I am currently near the end of the second season with them, firmly top of the table with a 12 point gap and unbeaten in 42 games, won the Papa johns trophy and knocked Manchester City out of the Carabao Cup. We am also generally dominating the team stats in every area that matters. 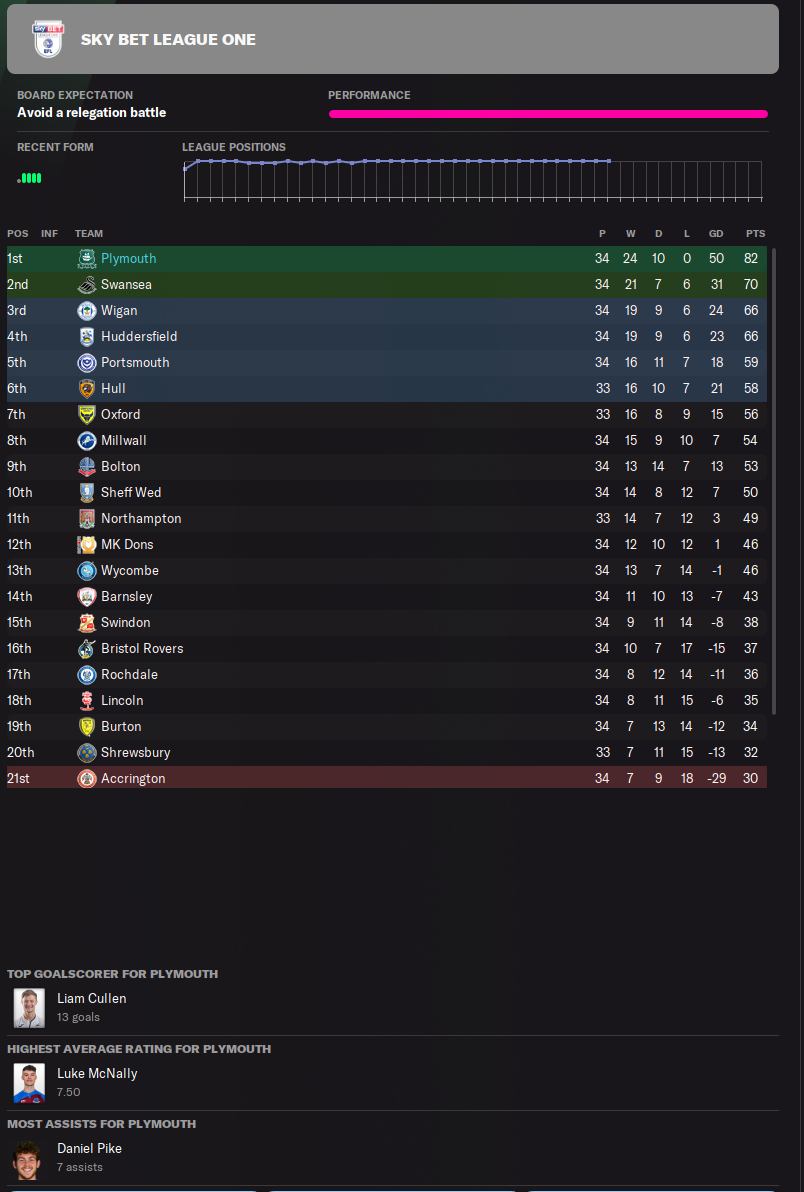 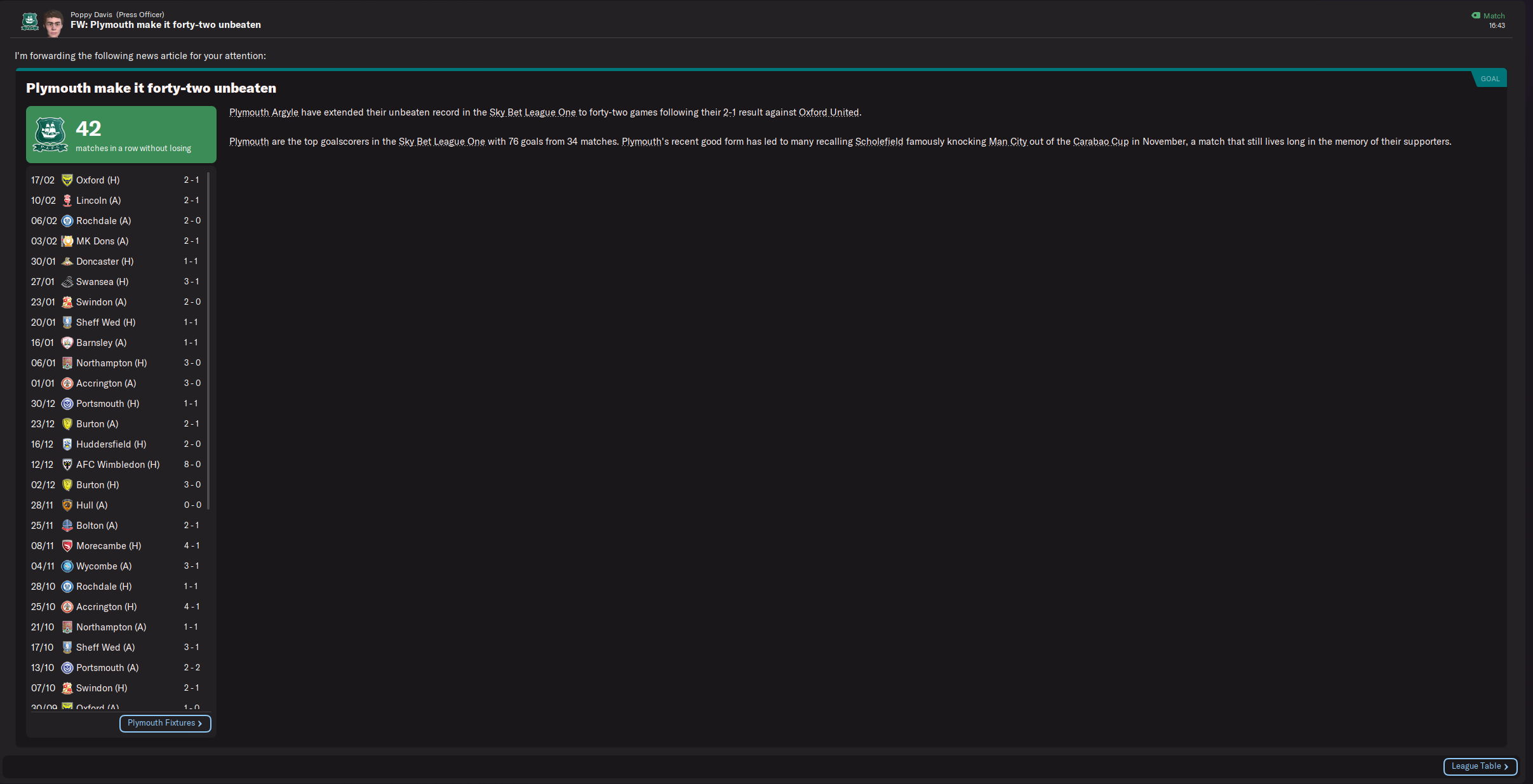 Set pieces - I have included some of my own, but by no means are these the most effective to my knowledge, but they have been working fine for me so far.

The two tactics I am sharing with you today are as follows ;

Scoffer-Ball 4-3-3
This tactic uses attacking fullbacks that stretch the pitch making room for the inside forwards to cause havoc on the oppositions defence and half spaces. You will find with the CB's set to play wider and the Half back dropping in they will recycle possession a lot to either side of the pitch till they find openings too attack and score. In attack the formation can look like a 3-2-5, throwing players forward into space while keeping possession and pinning the opposition in their box. In defence players will work hard to get the ball back while the back line of 2 CB's and a HB nullify and counter attacking opportunities. The trio of central midfielders is a great engine room to get this tactic going, a deep sitter (HB), a runner who tracks back (BBM) and a creative passer who sometimes ventures forward to support (DLP). 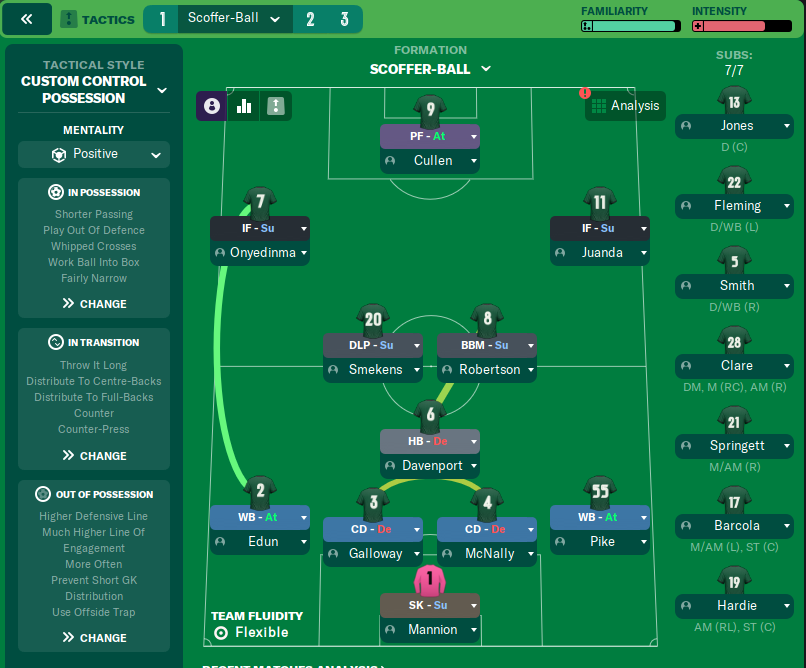 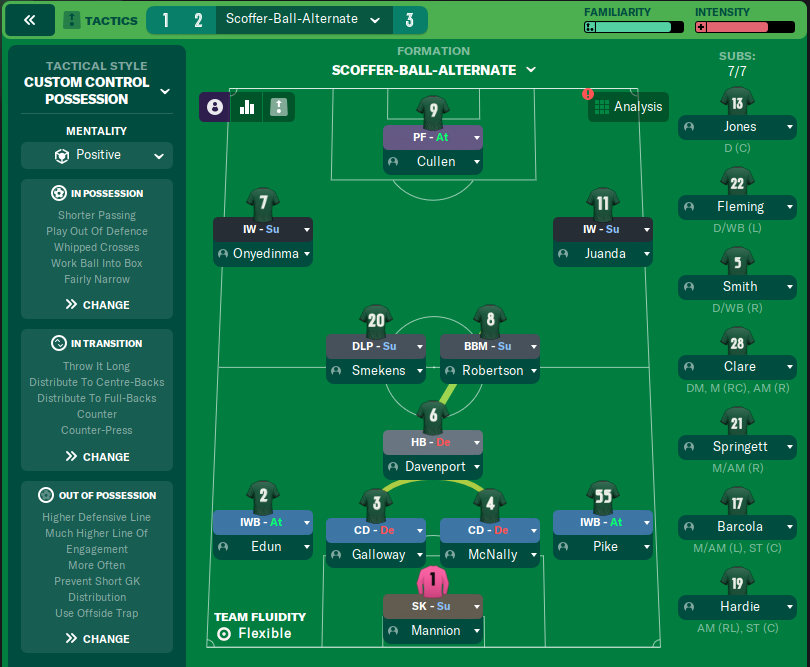 Below are what I look for when scouting players, In my player search (this really depends on the level of club you are managing) I search the specific attributes that player requires to play in that role, then only keep 8 of them ticked, then in the search menu change the attributes matched to 6/8 so I get a more broad range of player results and just adjust the attribute value from there.

But generally what I find most important for each role is as follows.

Thank you for taking the time to have a look at my tactics. Please give me any constructive feedback, and let me know how you find the tactics.

Hopefully I can keep you all up to date with my journeyman save and if I manage to finish this season unbeaten in the league!

Thanks you,
Joel Scholefield
UP THE TOWN, Corberan's Barmy Army.

I managed to finish the season unbeaten with Plymouth, was totally unexpected but as you can imagine I'm very impressed with how the tactics help up throughout a full season, especially as we went 54 games unbeaten streak of 42 (That was held by Huddersfield Town in the , smashing the previous record of 43 games from January 2011 to November 2011...) . As fun as it was playing as Plymouth, I decided I wanted a new challenge and was actively applying for jobs in other leagues abroad to try the tactics out with a better team or just at a higher level.

As the season came to a close i noticed Everton had been relegated so I decided to have a go at getting the vacant manager position. To my surprise I was successful in my application, my main challenge was getting all the best players there to stay at Everton, and I was successful to a certain extent but lost a few decent players as I didn't want bad morale effecting my teams performances. I played Ben Godfrey as a HB all season and it was an amazing decision he bossed the park 9/10 games. Now I have just finished my first full season there gaining promotion to the Premier League instantly with 106 points, 9 ahead of second place. We had a few losses here and there but that's expected as we moved up to a better quality division, and i would say we could have easily won or drawn the games we lost in.

Below I will show you a few images of the end results of my Plymouth save and the results of my recent season with Everton. I am looking forward to my first season in the Premier League and sharing my results.