Download
Overview History Discussion
Before I start my piece on this tactic I will tell you that this whole season was simulated for testing purposes, and as you can probably tell from the name of the tactic's file, this was my 21st attempt at tweaking and perfecting this particular tactic. This means that all the results don't take into account variables such as game management, training, team talks, touchline shouts and other factors which could have benefited me had I actually played the season.

I've long admired the likes of Klopp and Guardiola for the success they've both had in football over the last decade or so. Another manager who I look up to is Johan Cruyff, who once said "Football is a game of mistakes. Whoever makes the fewest mistakes wins." This is not only apparent in the way he set up his Barcelona sides, but also in the tactics of Klopp and Guardiola today, where the aim is to minimize the chances of mistakes happening by playing the majority of the football in the opposition's half, a region of the pitch that is ultimately more likely to produce goals and where it is less likely that you will concede.

To do this, both managers prefer to use a 4-3-3 formation, shifting to a 2-3-5 shape while attacking, which I have tried to replicate in my player roles shown below. I'd recommend watching this video by Nouman, where he explains both Liverpool and Manchester City's attacking shapes in more detail if you are interested in learning more: 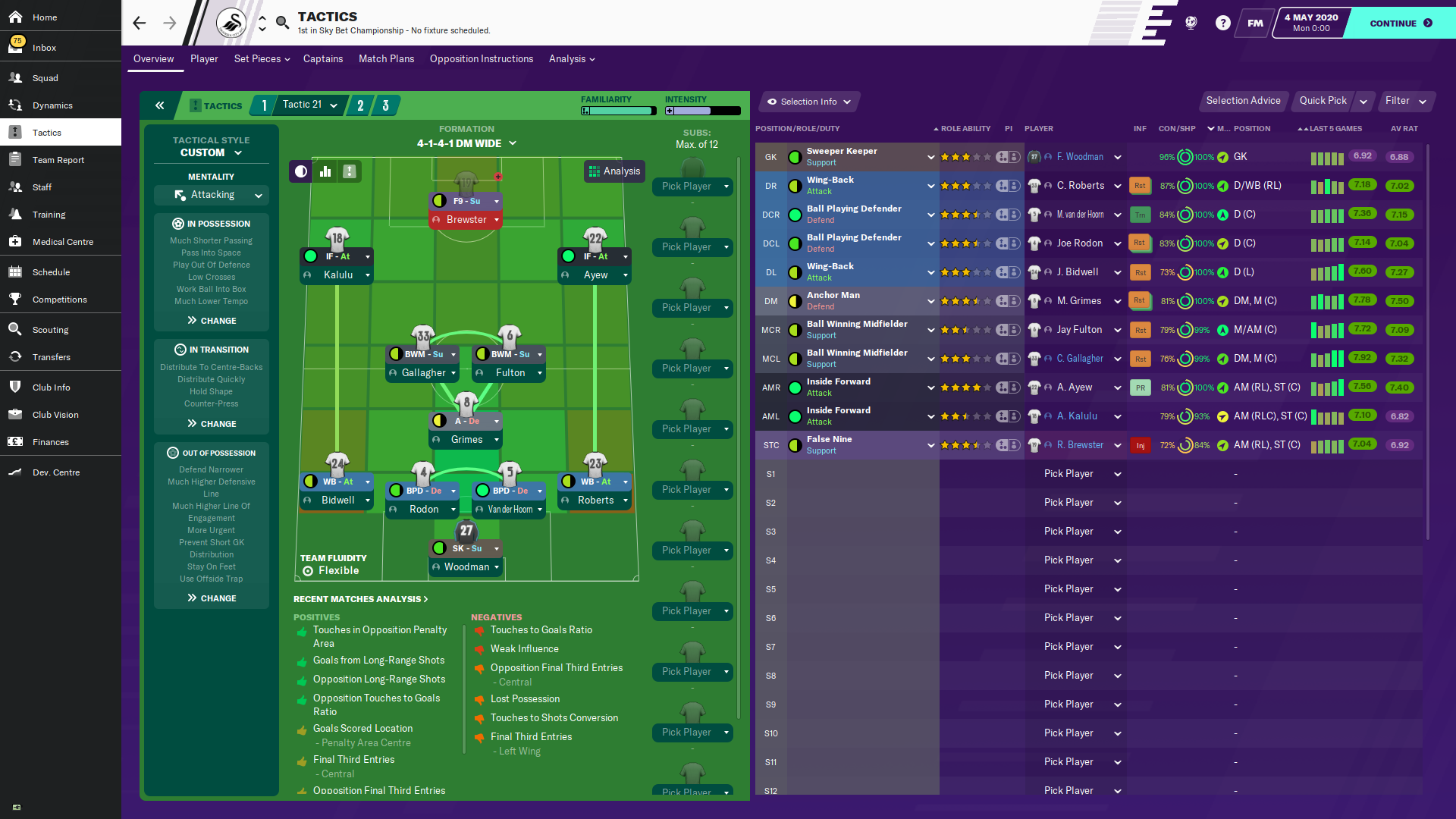 My 2-3-5 attacking shape in this tactic comes from the 2 CB's and 3 central midfielders protecting us from the counter, and the wingbacks, inside forwards and false 9 forming a line of 5 at the front to try and get in behind the defence. The idea of the attacking shape is that the false 9 drops deep, dragging a CB out of position and leaving space for the inside forwards to attack. This then gives the defending fullback a decision to make, follow the inside forward to prevent him getting a clear shot at goal (in the process leaving space for the wingback to exploit which gives the possibility of a cut-back), or stay in position and leave the inside forward unmarked in a very dangerous position. Damned if you do, damned if you don't.

If I hadn't simulated the season I would have also made a few tweaks on a game-by-game basis depending on the opposition's formation, these being if the opponent played with a CAM I would change one of the BWM's to a DLP (s) to create a 2v1 situation in that area of the pitch during the build-up phase. If the opposition played with 2 strikers, I would change the Anchor man to a Half back so he would drop in between the CB's to create a 3v2 situation during the build-up phase against the opposition strikers.

The Player Instructions are simple. I have both wingbacks on 'Stay Wide' to try and stretch the opposition defence. Both BWM's have 'Hold position' and 'Stay Wide' as they are there to provide cover for the onrushing wingbacks. The last instructions I have selected are 'Mark Tighter' for both Inside forwards, just so they track back a little bit more so we are not outnumbered on the wings when we actually do have to defend.


I have gone for an Attacking mentality as the description says 'where you expect to dominate possession in the opponent's half'. The rest of the instructions are quite self explanatory, but just to clarify the width is set to standard so that we are not too narrow and easy to defend against but yet not too wide where it is more difficult to keep hold of the ball. The tempo and passing are both set at the lowest setting possible to maximize ball retention. We want to score goals by almost walking the ball in, therefore Work Ball into Box and Low Crosses are selected to try and increase the number of cut-backs and tap-ins. Pass into Space is selected as well as an extra tool in trying to break down opposition defences. 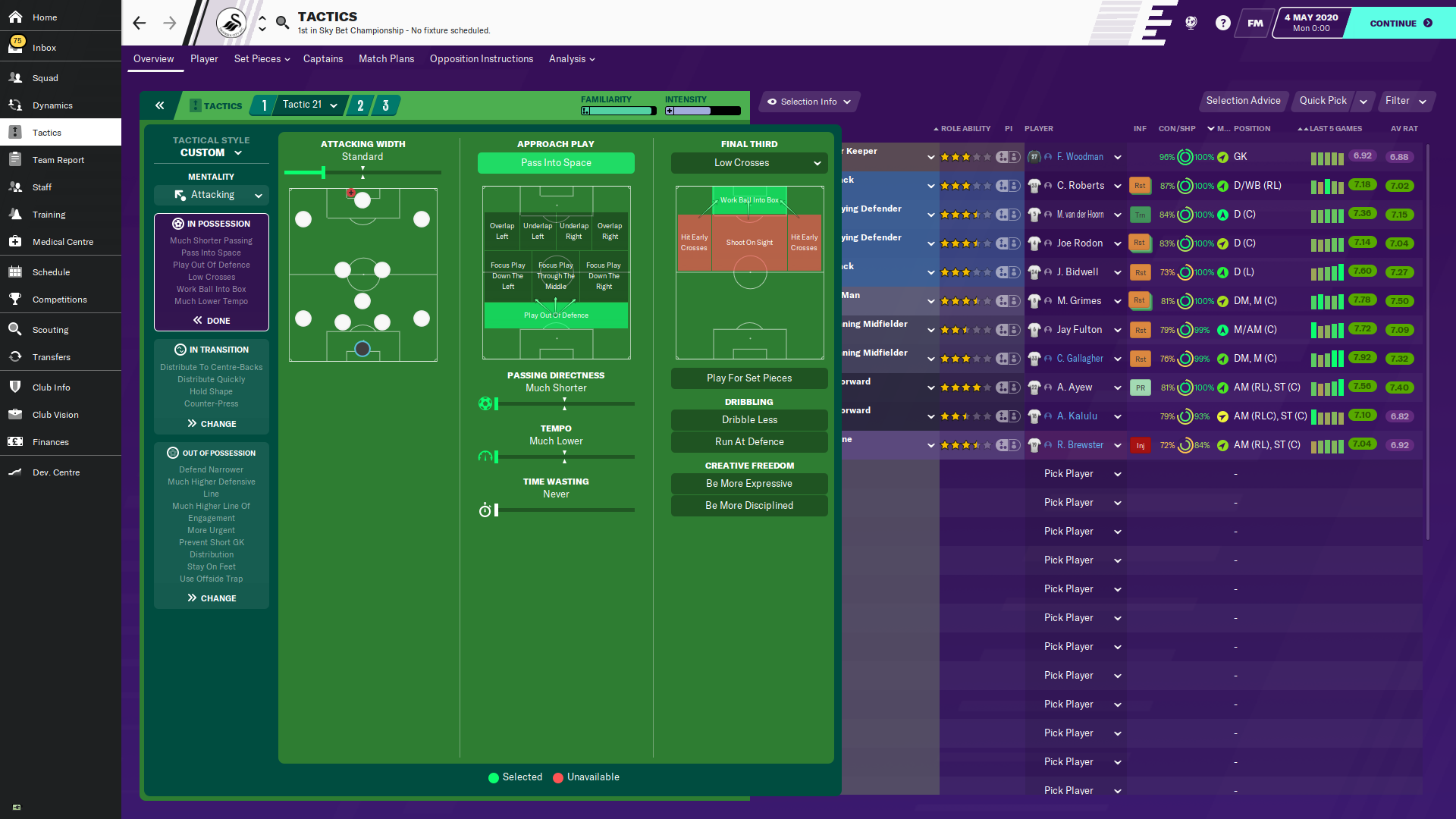 The 'In Transition' team instructions are exactly the same as those set in the Tiki-Taka Default Tactical Styles, as it largely does what we want it to do in trying to win the ball back as soon as the ball is lost and keeping the ball when it is won again. 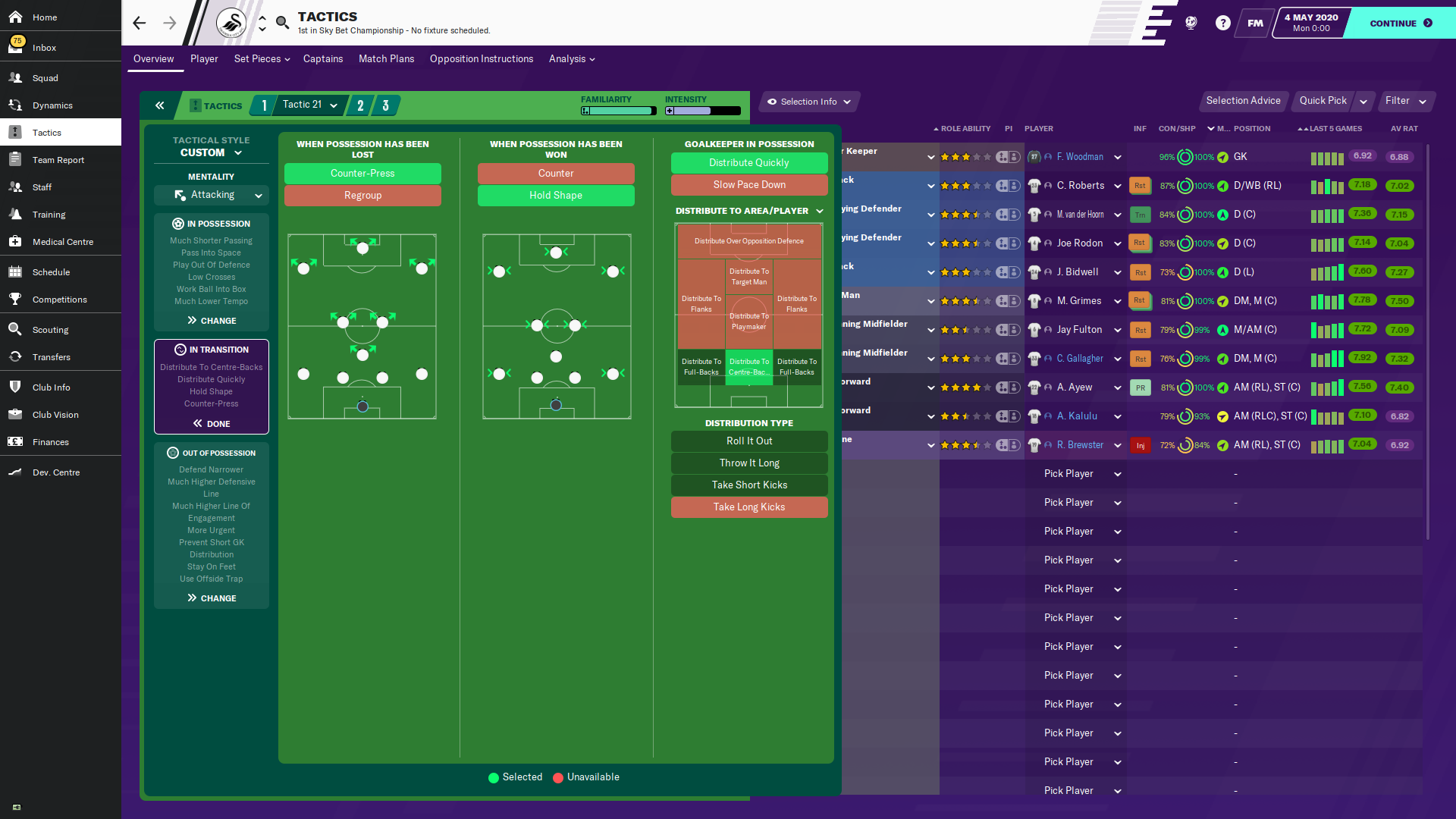 Arguably the most technical piece of this tactic is the 'Out of possession' team instructions. I've used Opposition Instructions in combination with the Out of possession instructions to try and replicate pressing traps used by Klopp's Liverpool in real life, completely blocking off the center of the pitch by either man marking or blocking passing lanes to their midfield men, forcing their defence to clear long upfield or to play out wide, where it is easier to press the opponents using the touchline as an extra form of defence. 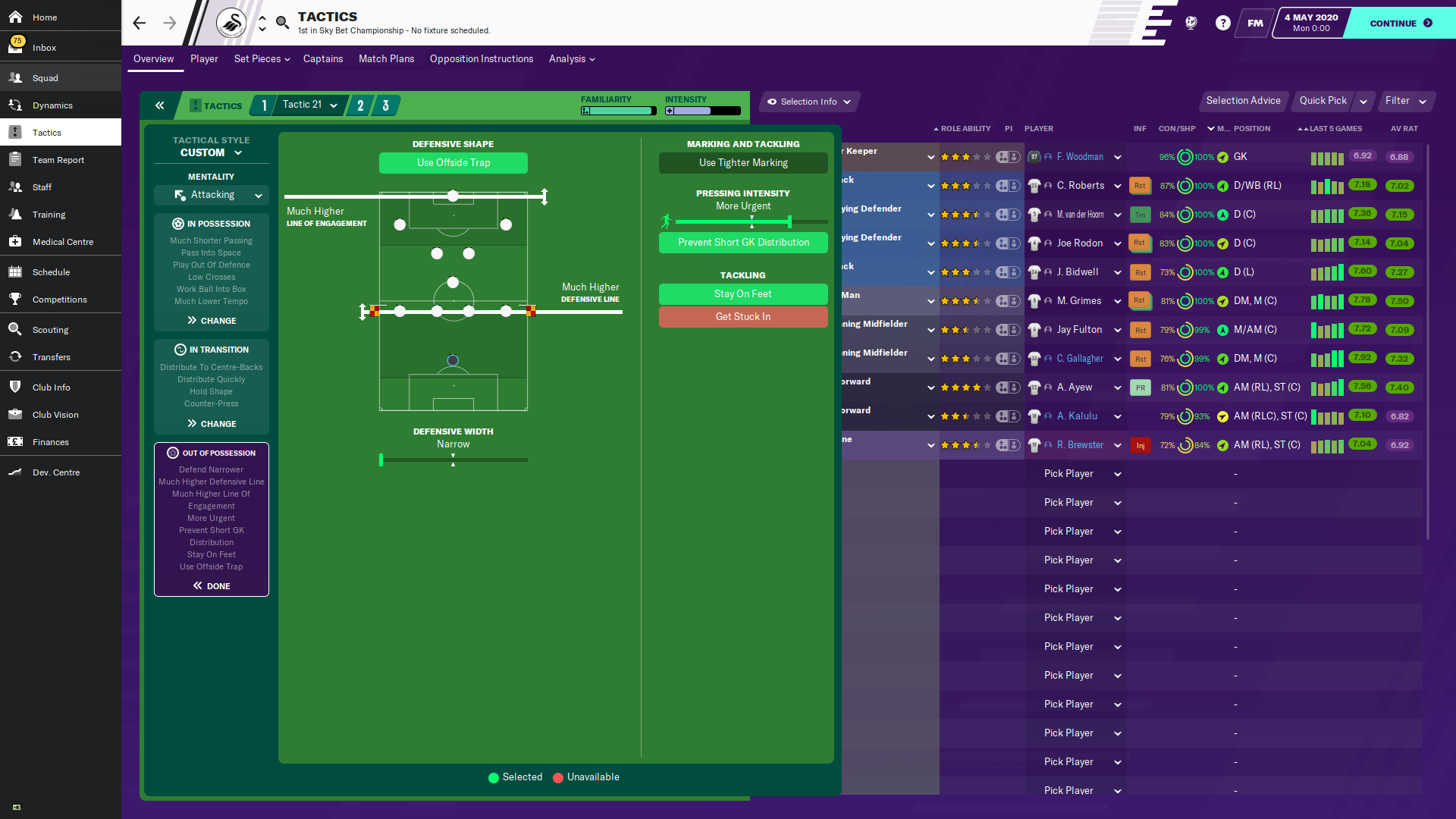 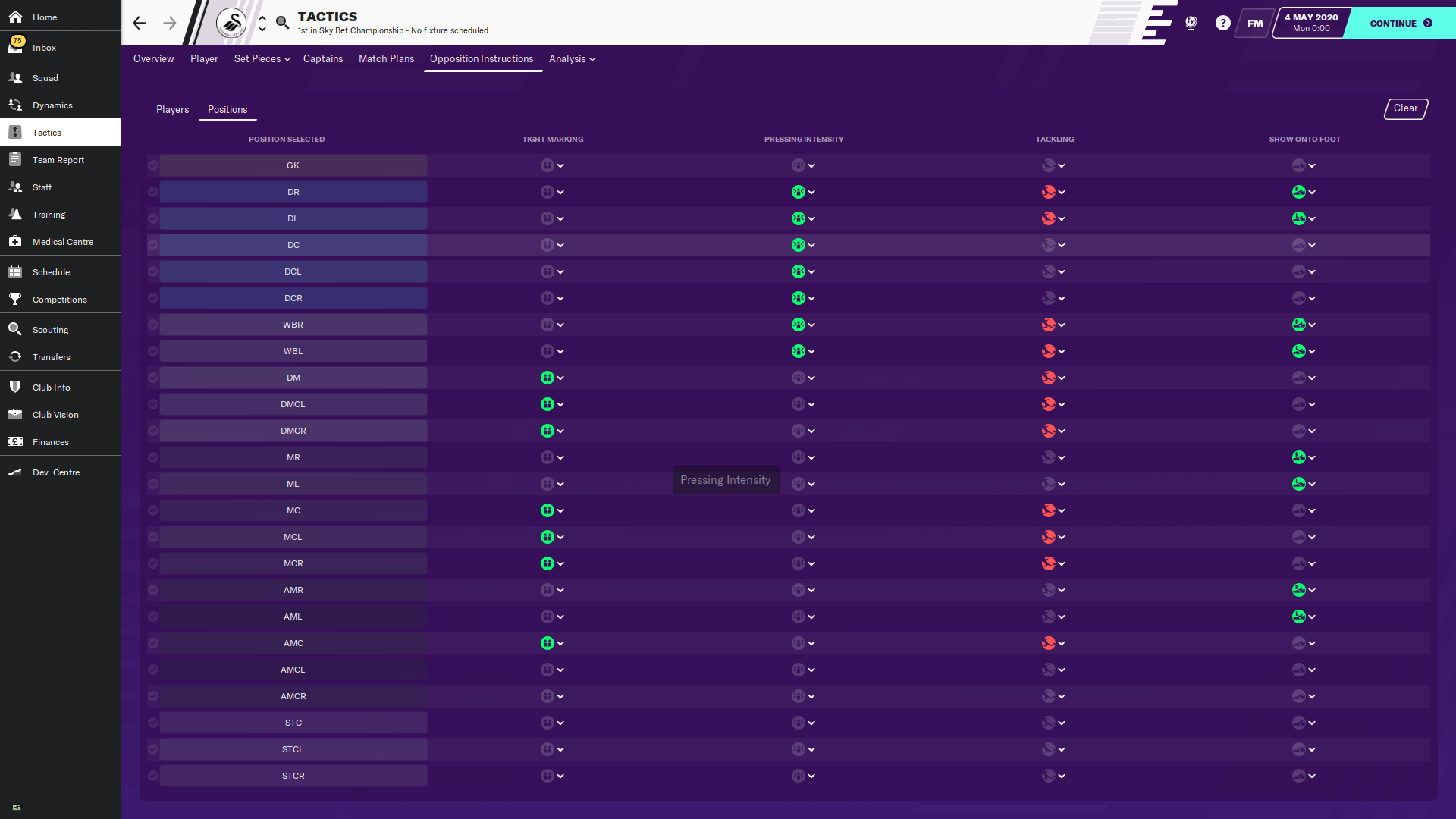 Now that I've explained how the tactic works, here are the results come the end of the season: 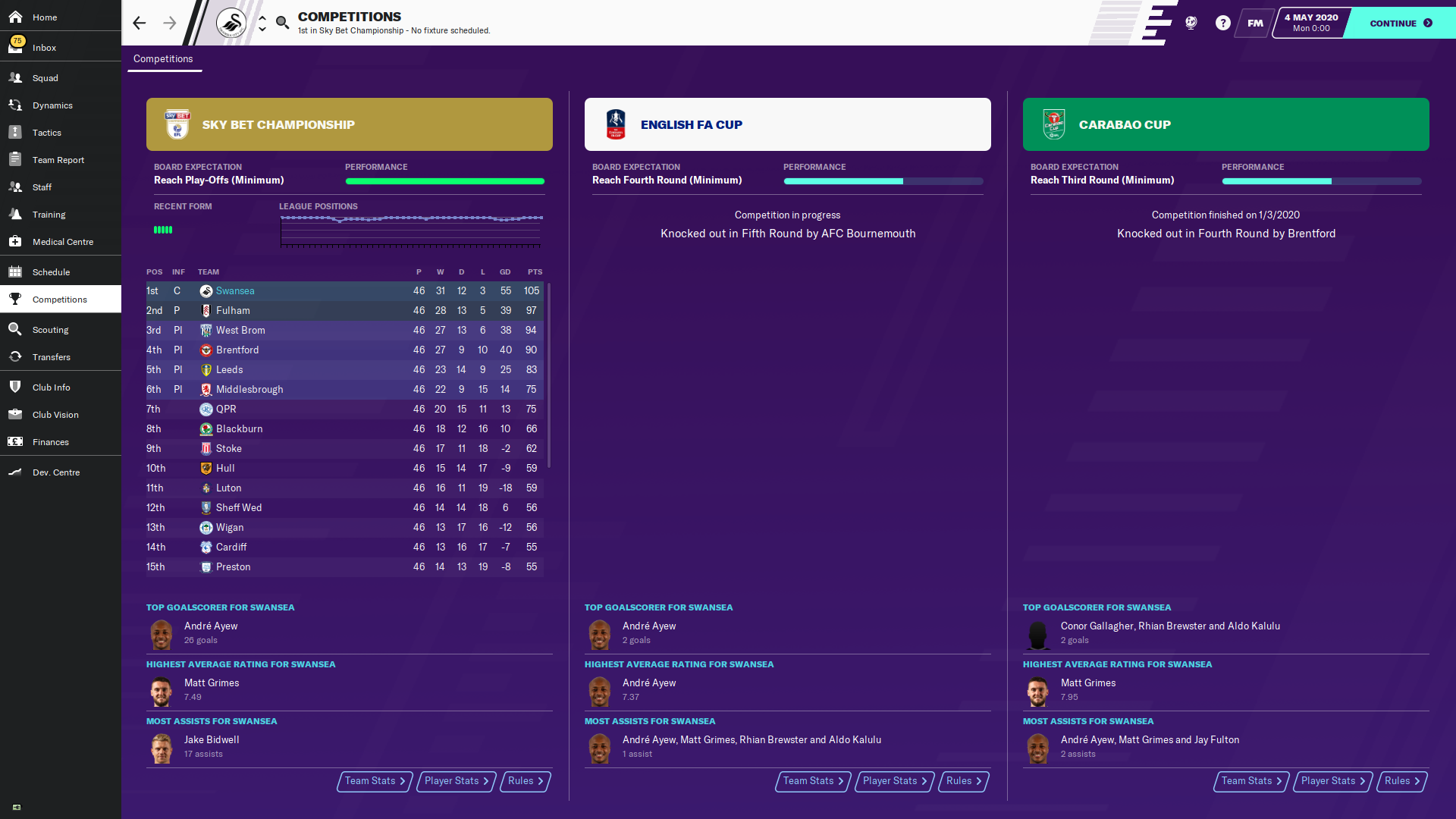 (Bear in mind that the record points tally in a single season is 106 set by Reading, so to only be 1 point off that with a Swansea side predicted to finish 14th by the media isn't too bad) 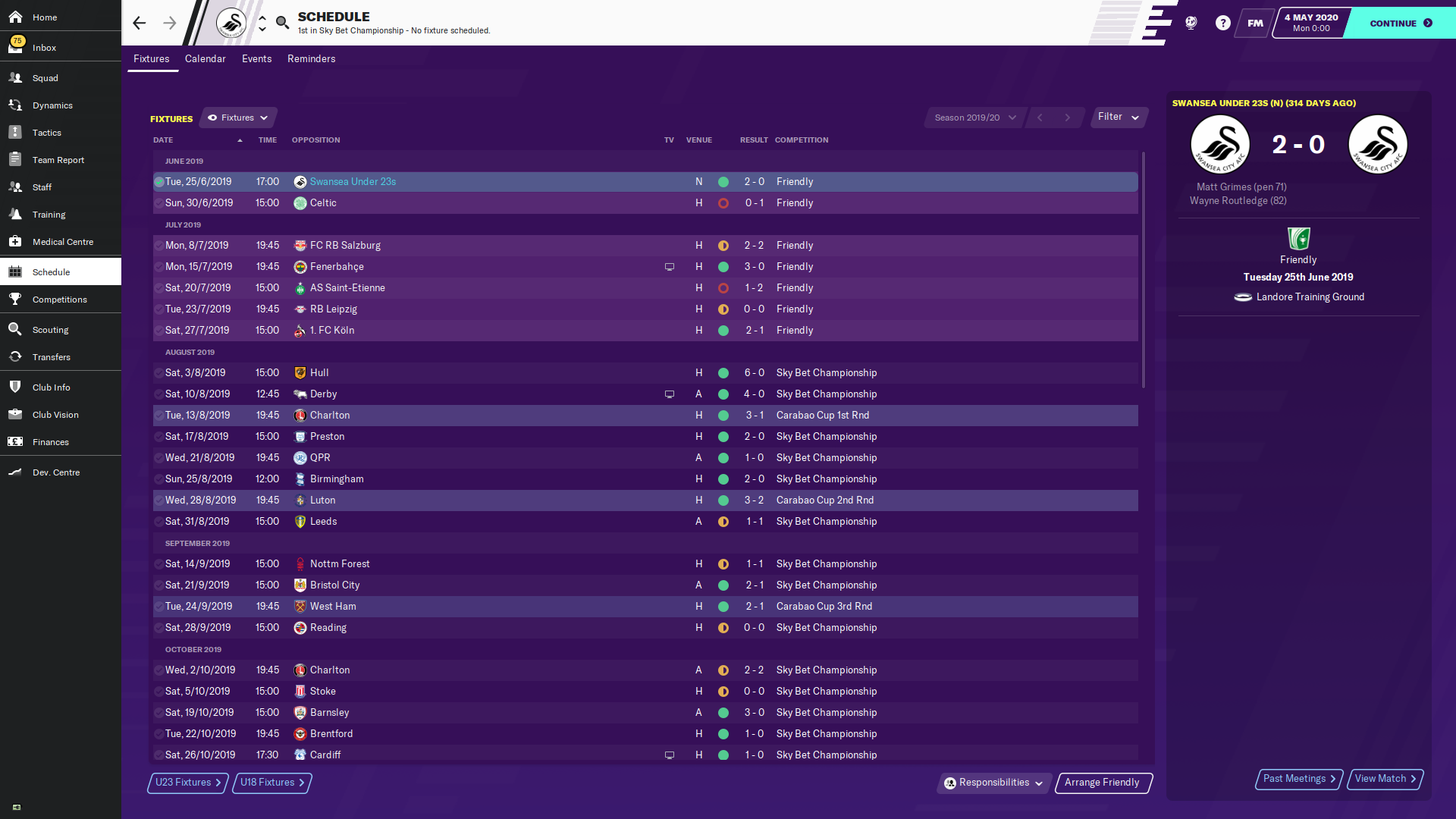 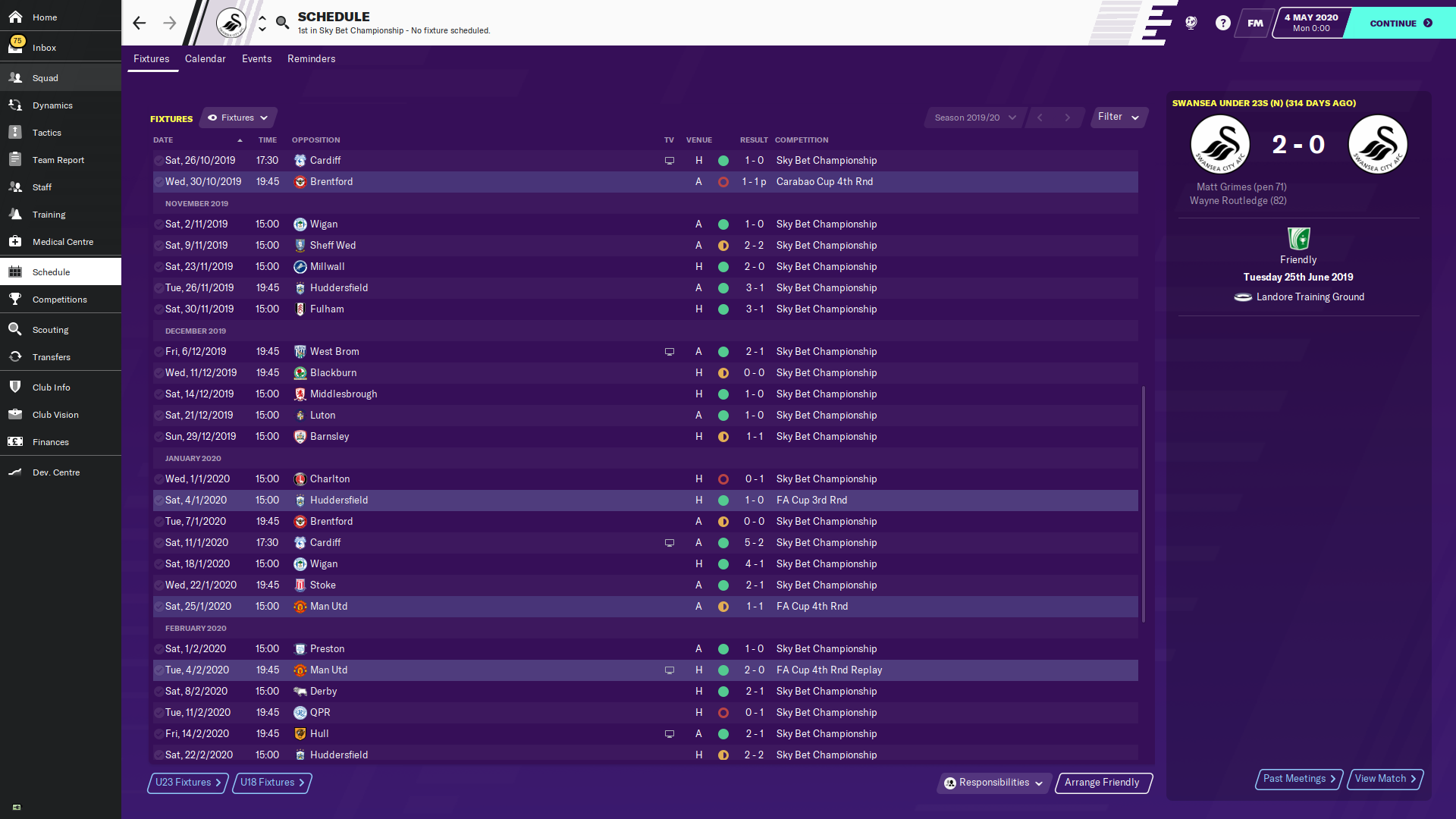 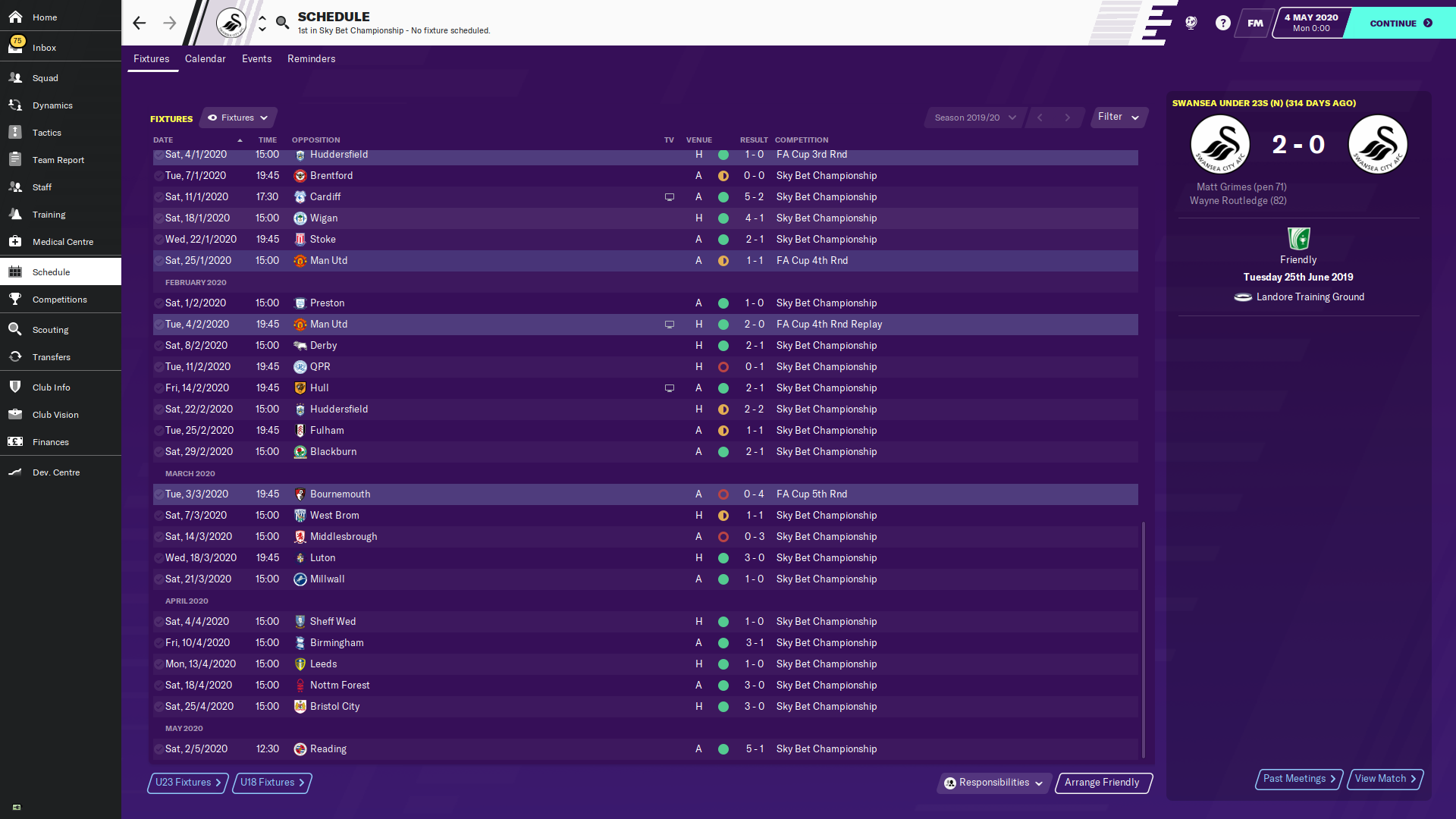 Arguably the most pleasing thing about this season was the double over Cardiff, which has never happened before in a single season in the South-Wales derby. Also note the 2-0 win to knock Manchester United out of the FA Cup. 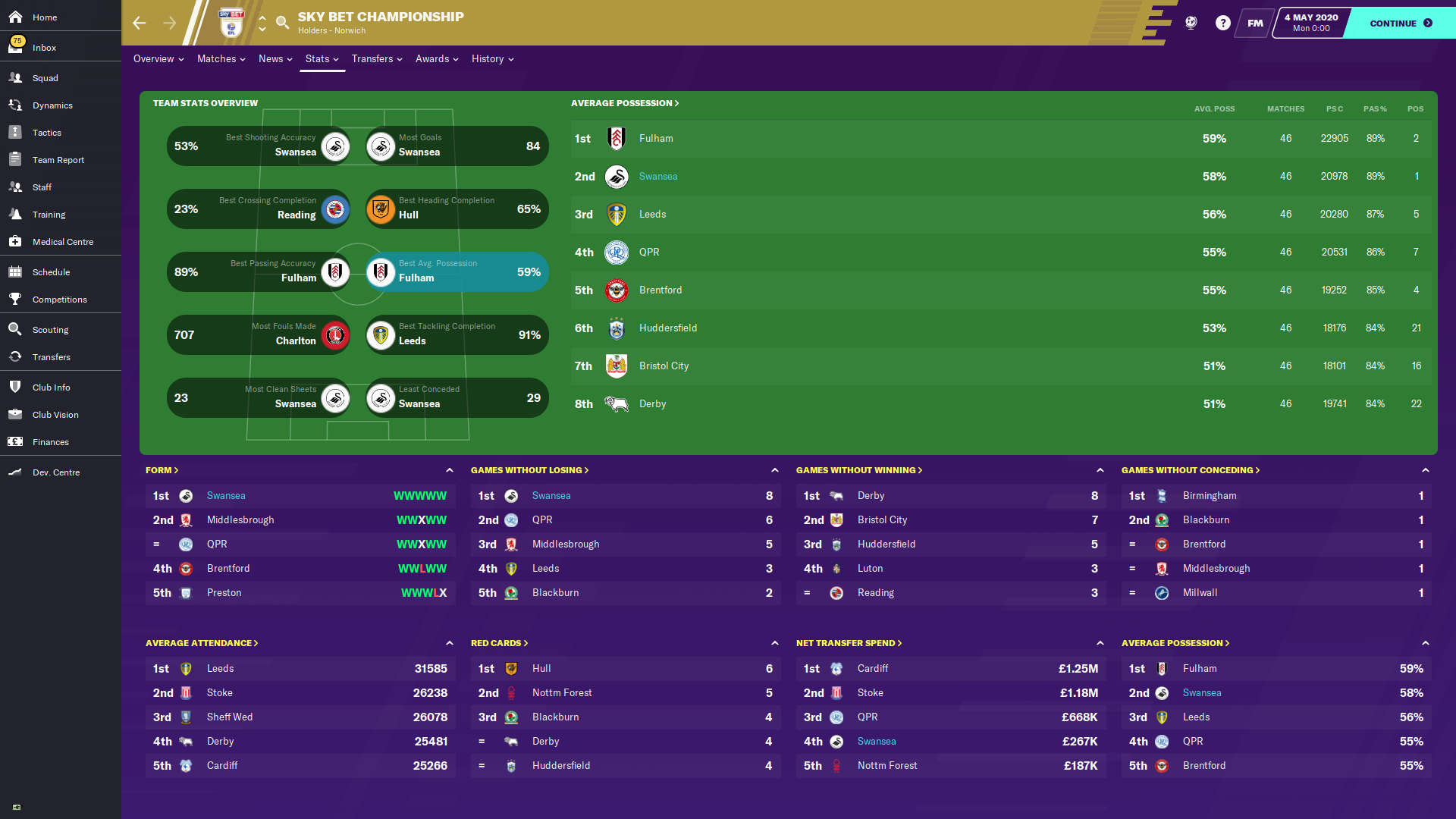 We ended up scoring the most, conceding the least and having the 2nd best average possession in the league which is essentially what we were trying to achieve with this tactic. 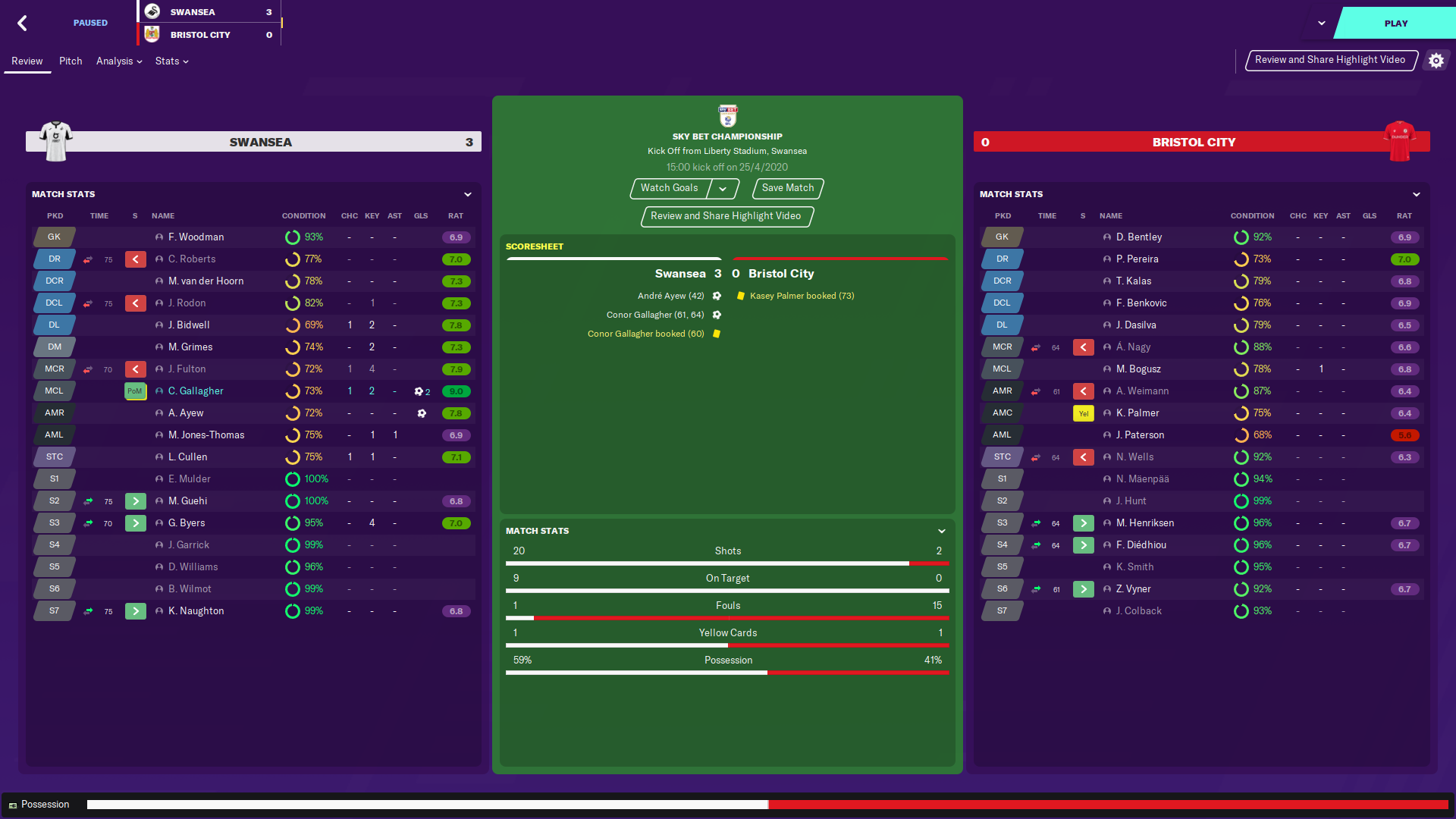 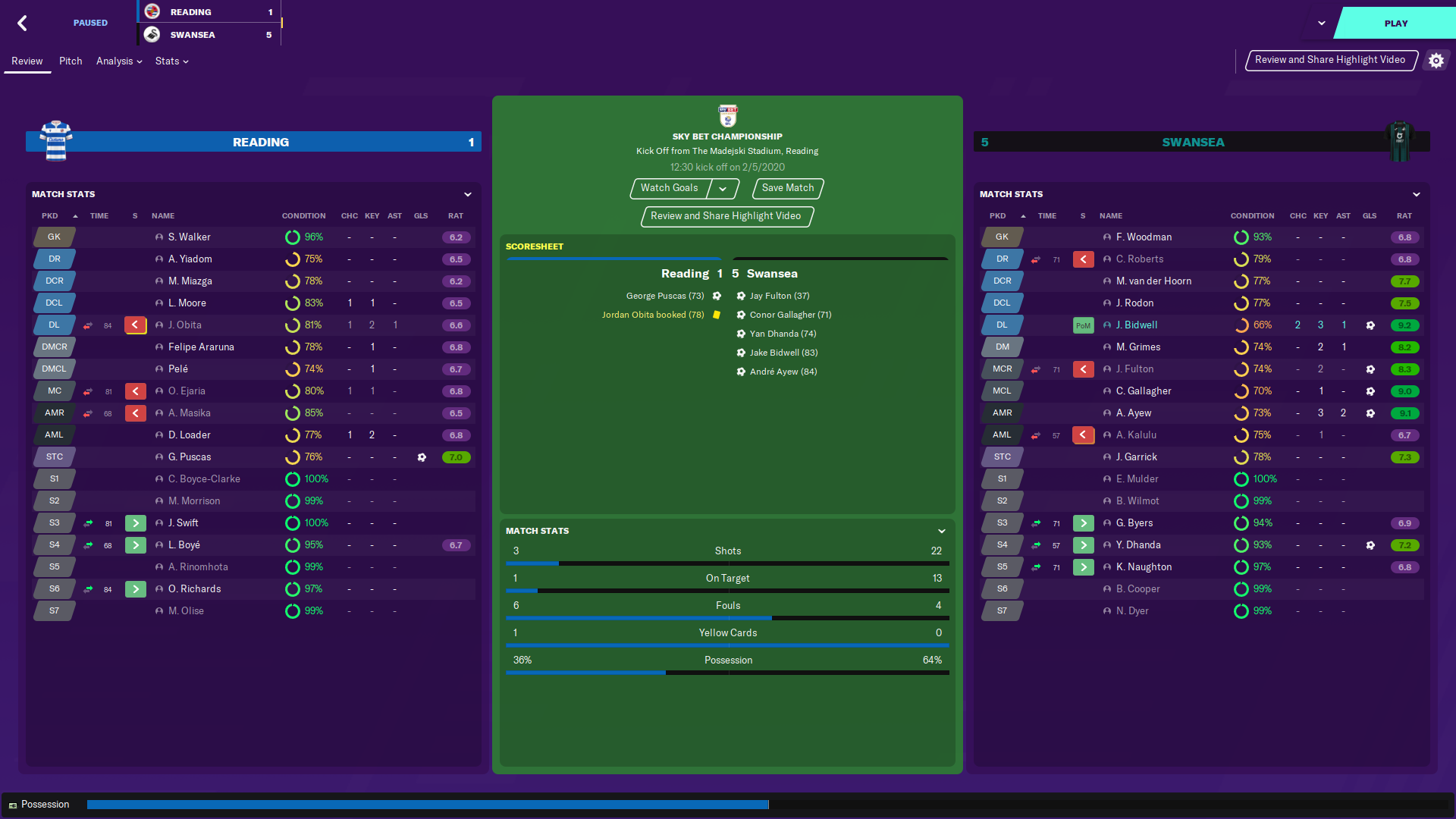 These are examples of your typical stats for games, dominating possession, scoring goals and very rarely letting the opposition have shots on goal.


I hope you enjoyed the read and that you get success using this tactic.