Download
Overview History Discussion
Where did this come from?
I'd been playing with something mimicking Guardiola's Man City team (screenshot below). I'd been tweaking it based on reading the book 'Inverting the Pyramid' and working with the players I had at this Arsenal team. With tweaks, it had started to resemble a classic W-W formation developed by Hungary coach Márton Bukovi who turned the 3–2–5 WM into a 2–3–2–3 by effectively turning the M upside down. 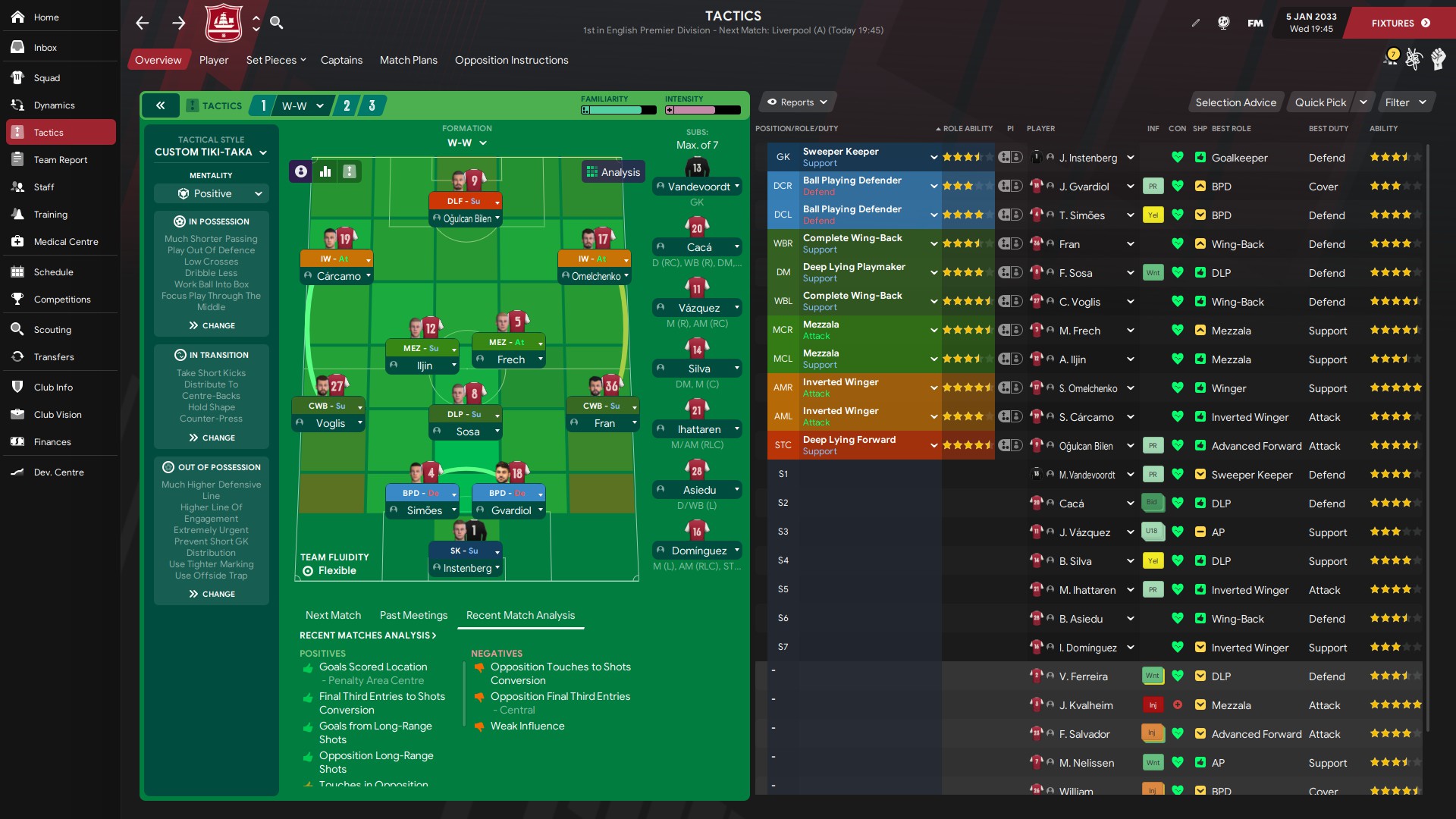 I liked having alternate inverted wingers and inverted full backs and built the team around these players. I felt it added overload options to the team and I have squad depth to switch left and right if I wasn't getting enough penetration. I generally play fairly narrow so my attacking players would naturally gravitate around the 18 yard box. I've never trusted high crosses (personal preference as it feels like a loss of control and risks high turnovers). I also like having attacking mezzalas arrive for lategoalscoring opportunities.

Why did I change?
However, despie playing a high line, controlling possession and having plenty of chances, I wondered if there was more I could do to compress space, increase attacking possession and pick up the pace of counterattacks. I started by turning the 3 at the back into a 1-2 i.e. a very quick, tactically savvy central defender, with two half-backs in front. If they were deeper, it'd be similar to a sweeper system. I felt that the half backs would drift deep, when needed, into the space which would be occupied by the (imaginary) wide centre-backs and help plug gaps left by attacking full-backs. the resulting formation is below. 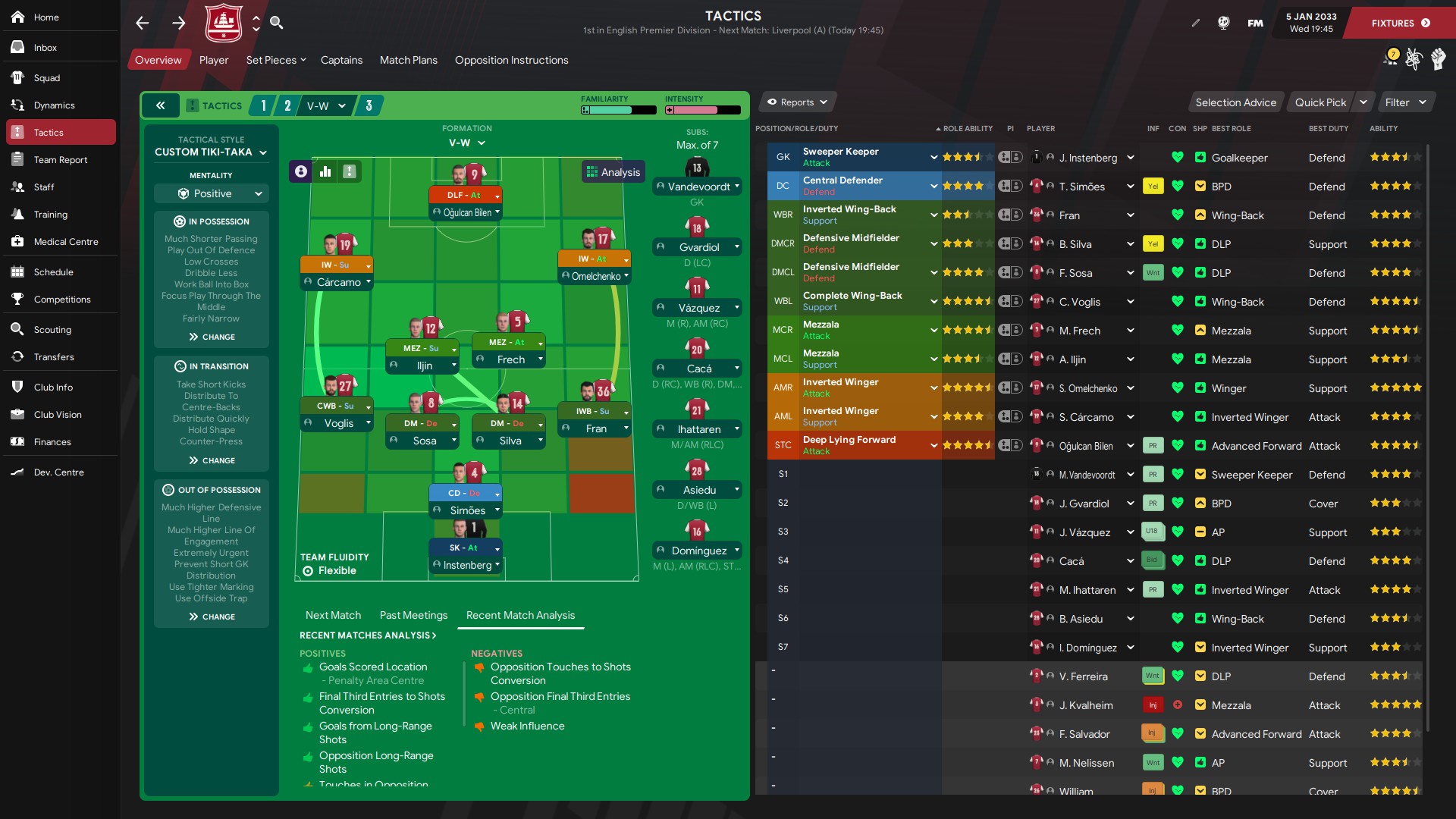 The attacking options haven't changed that much from the previous iteration, but the defensive approach is more compact and with half-backs more attack-minded and technically better than ball-playing CBs. I attach screenshots o fthe instructions below. The instructions should be consistent with the narrative above. 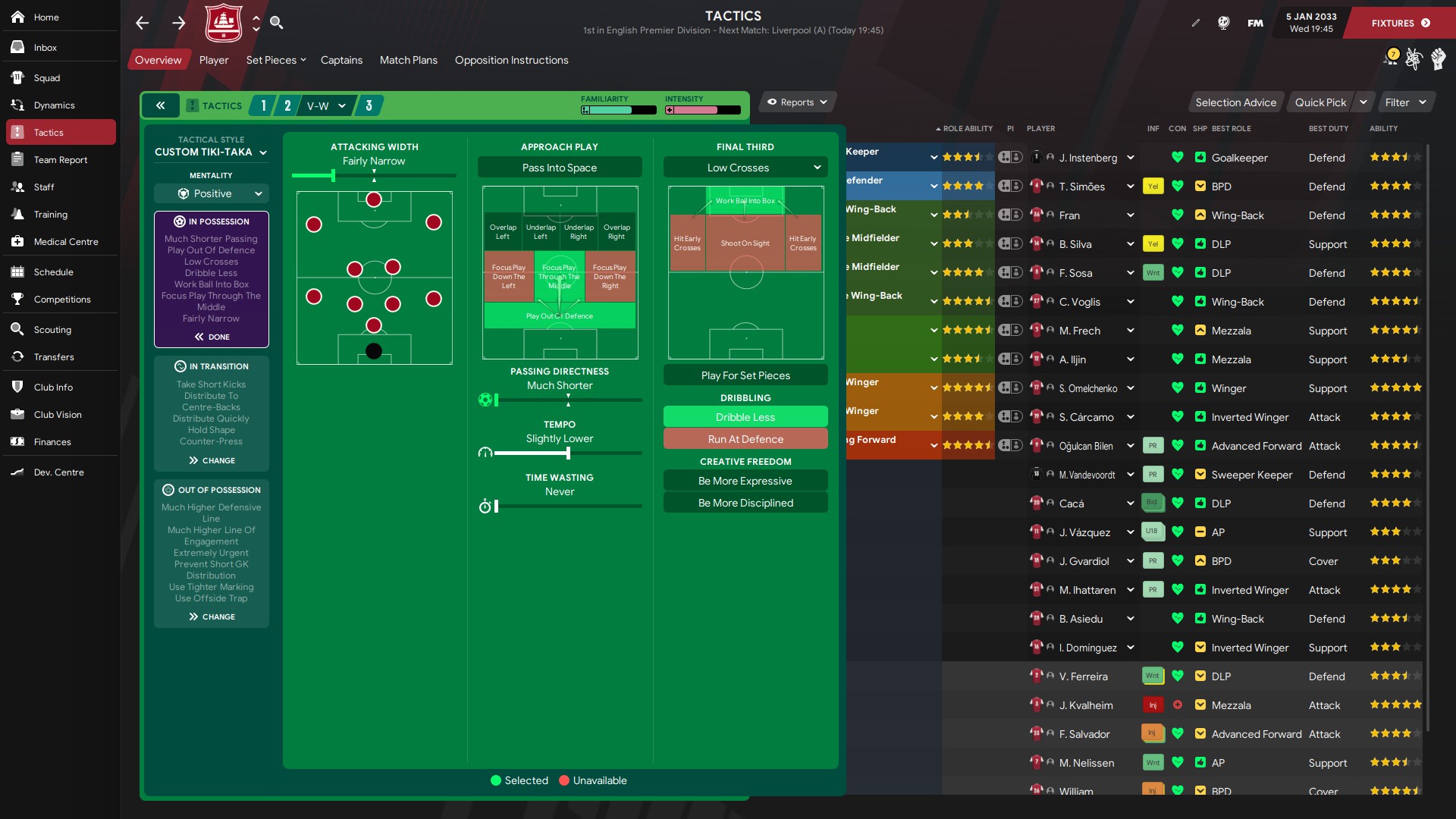 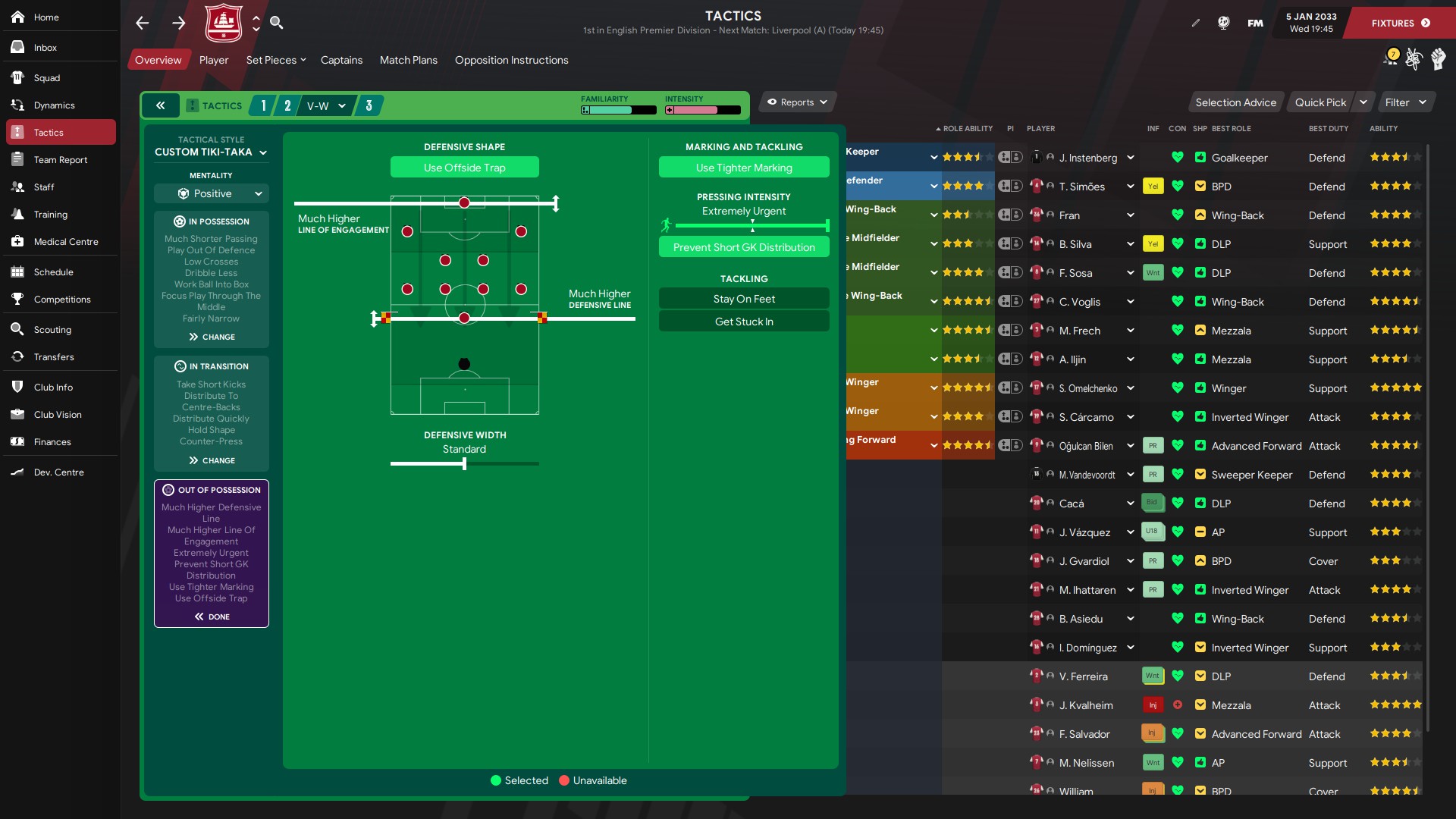 Set pieces:
My set pieces are functional and lead to a reasonable, if not amazing chance of conversion.

I switched to short throws a while ago as long throws just stopped succeeding and I was happier getting it to feet and using pace and passing quality to create a chance - or at worst, get it into the mixer. 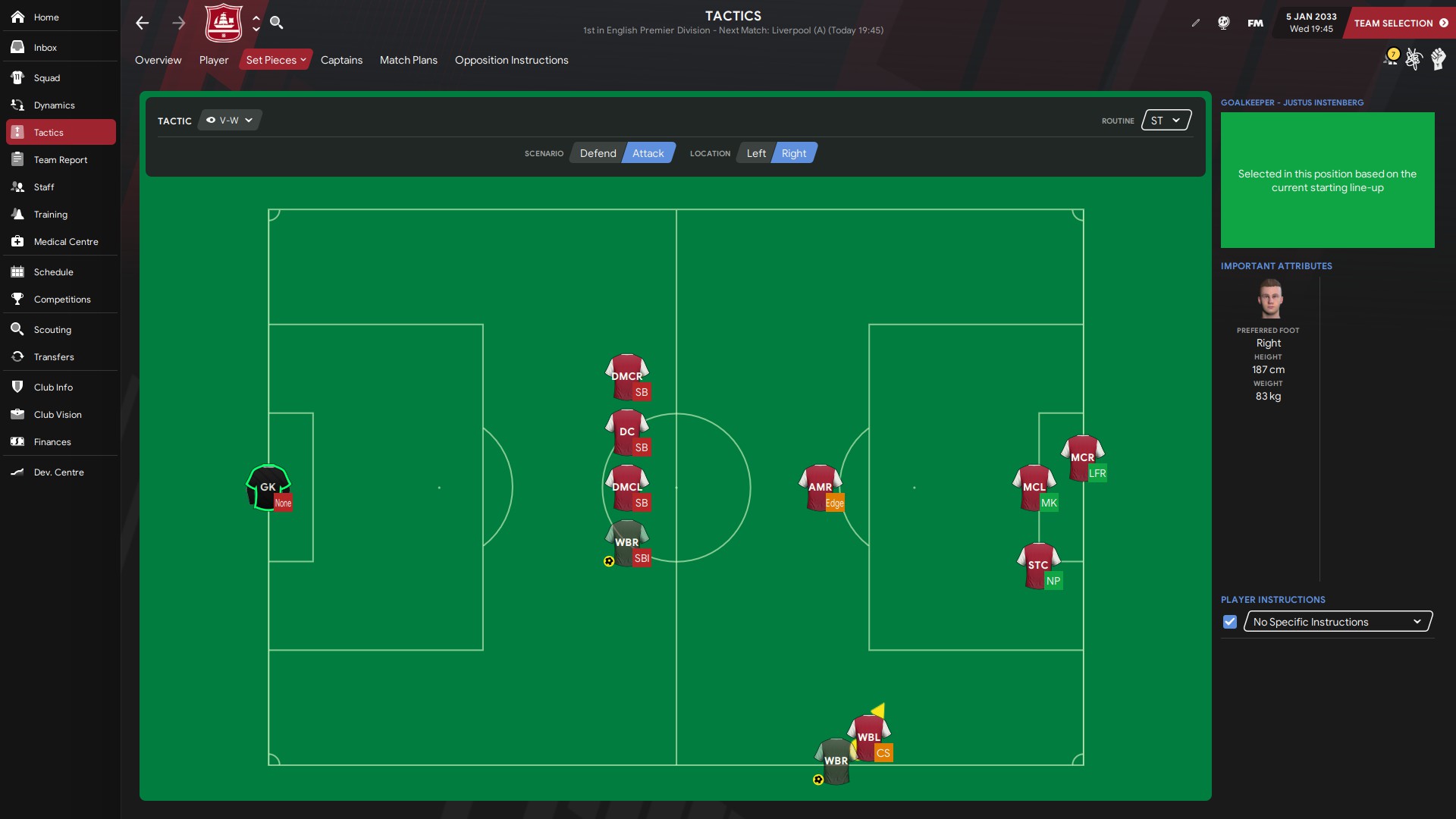 For the corners, the plan was a good head at the far post to bring the ball across the goal onto the path of a competent attack player. The back-up was a late arrival wing-back in the box to direct a pass or - as a last resort - take a potshot. 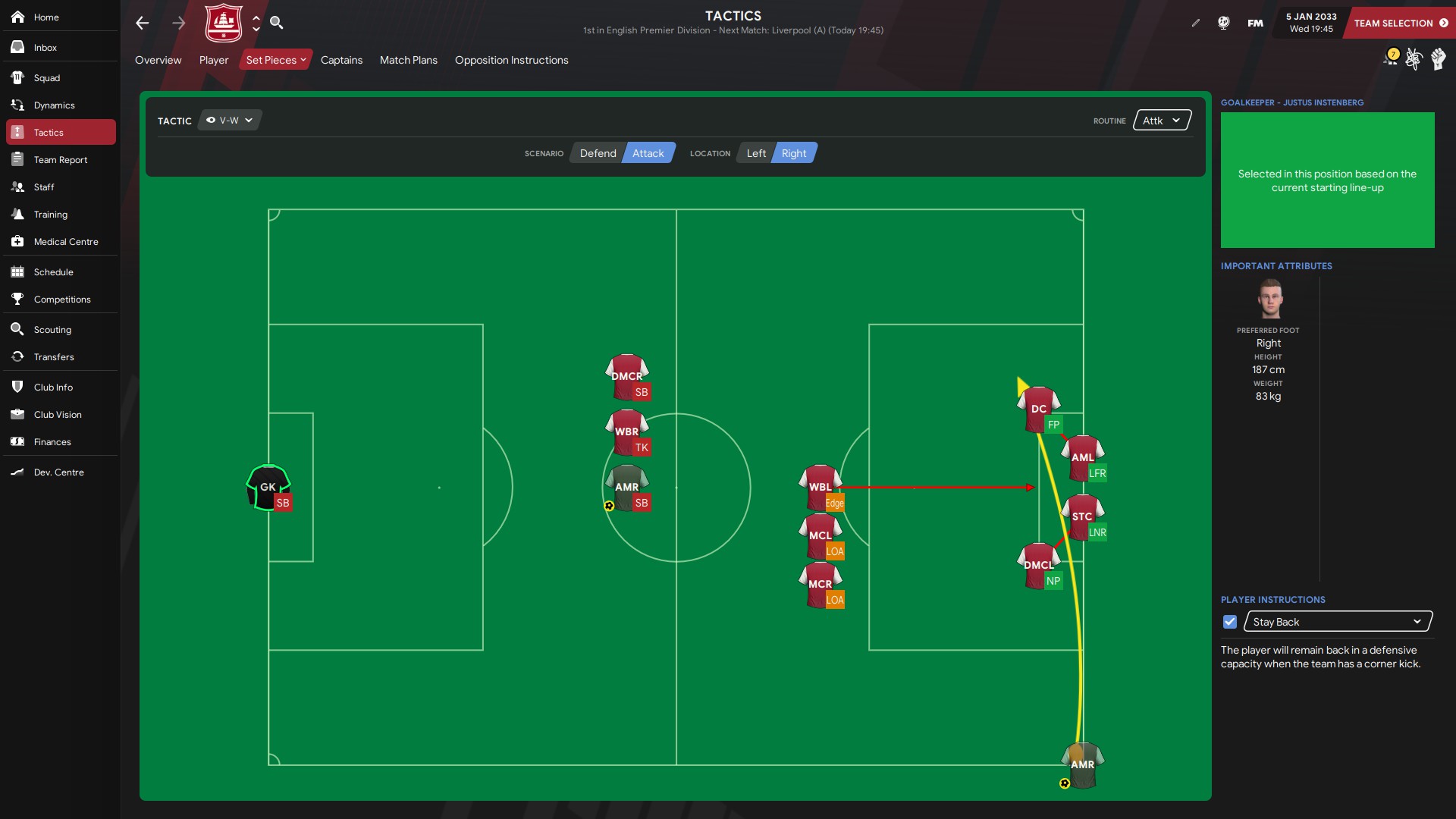 For indirect free-kicks, I probably lacke dimagination, but the aims was to put it in the path of runners into the box and any overhits or deflections would land to plenty of attack minded players. 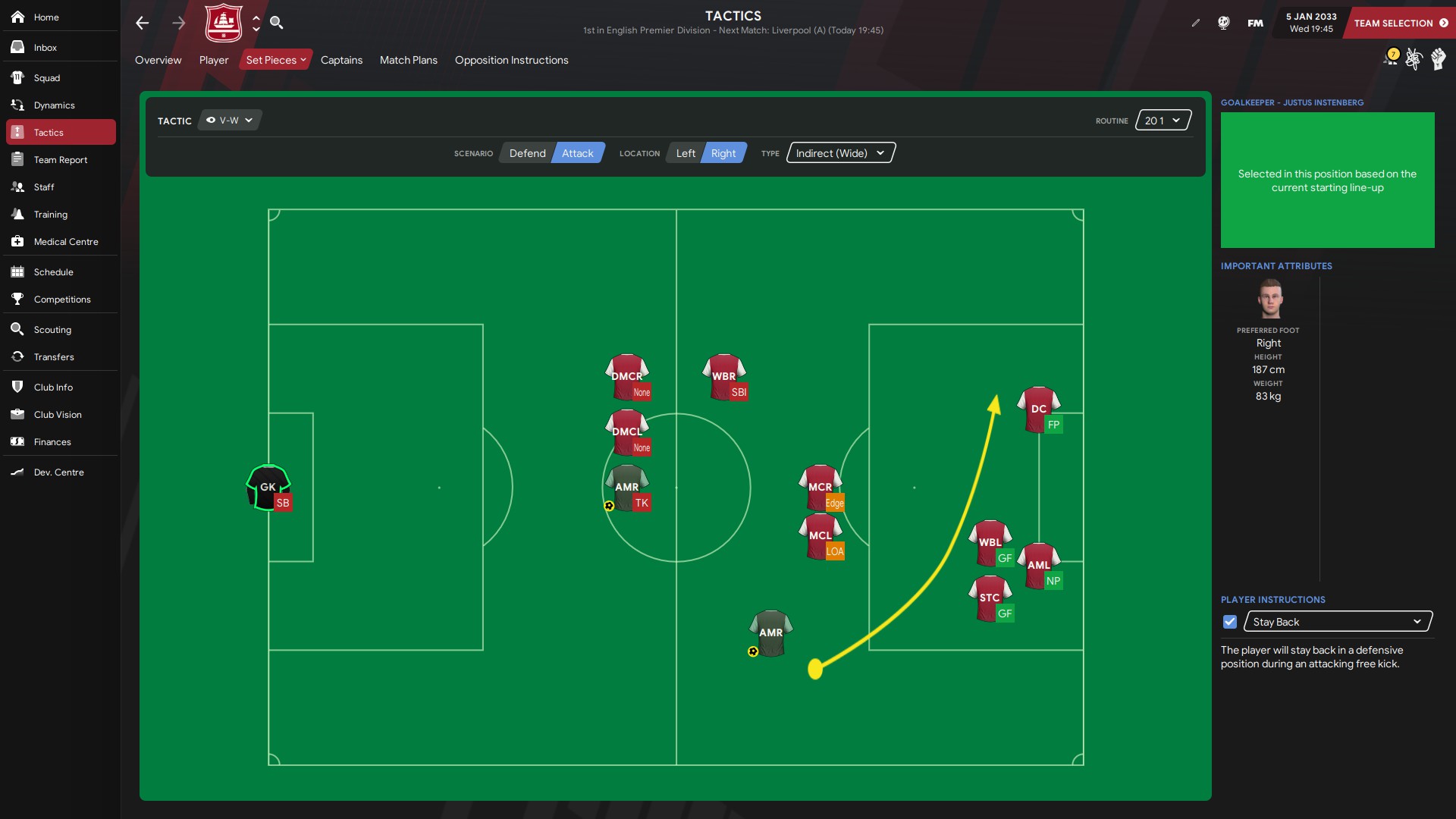 I mixed these up slightly, but the philosophy was similar; play into the area quickly, to dangerous players and overload quickly for a possible extra chance - or a more controlled one.

The quality of set piece takers is reasonable... 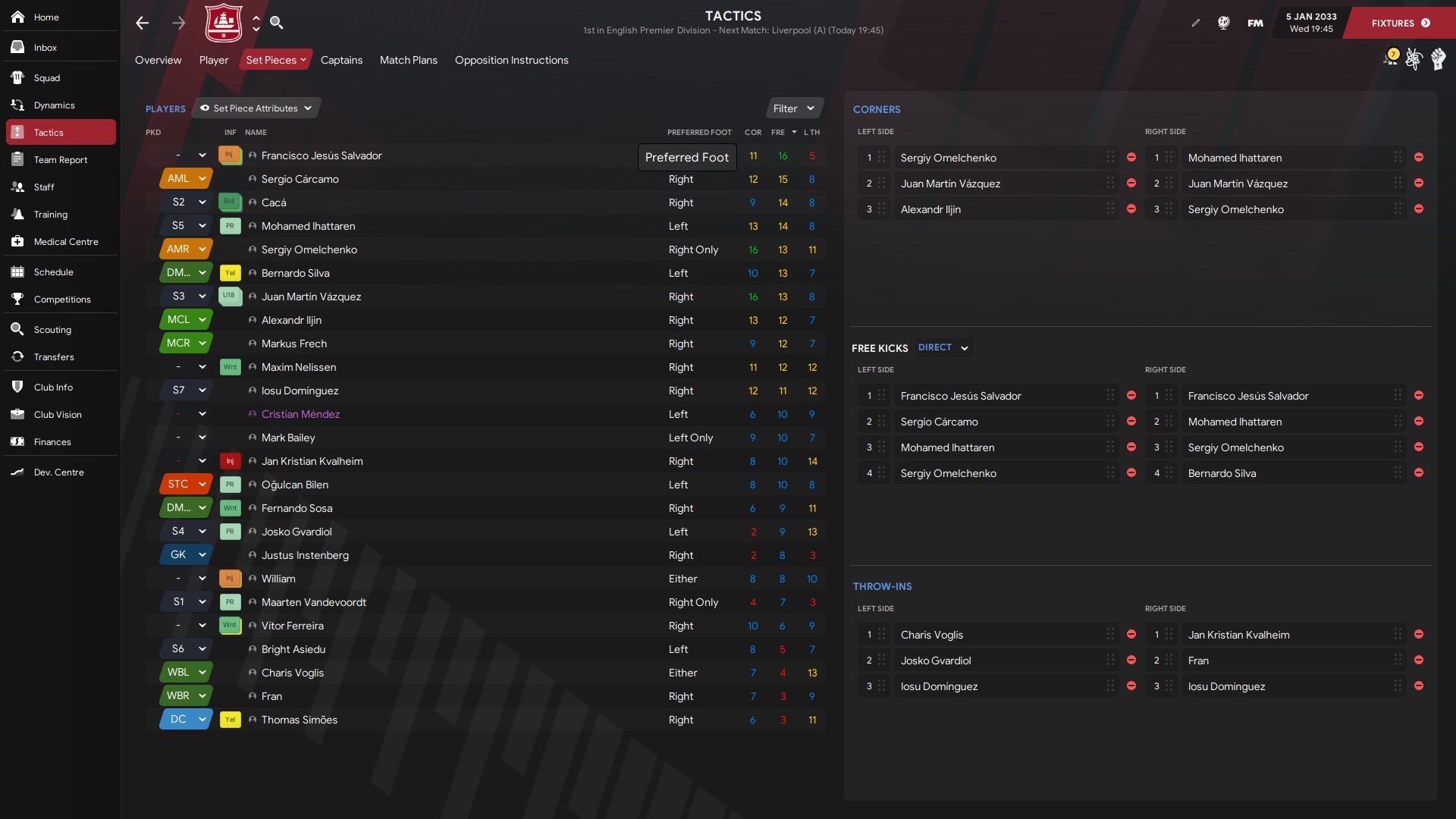 Opposition instructions
I don't mess about with opposition instructions too much as it disrupts my team's shape and pressing style. No man marking. However, I do try and show danger players onto their weaker foot (if applicable) and will press those playersharder for periods, if momentum is going the wrong way. Generally I won't do this for much longer than 20 mins to limit fatigue.

Training
Training is where I'm weakest. I trained the team for the new tactics a good few months before using it. I looked at the players I'd planned to use in each position and focused on improving the 'greens' or scouted for replacements over the summer. I get good coaches and trust them - although I regulalry refresh the assignments to avoid wearing them out or imbalances

Players
As for traits, it depends on the position, but for wide players, the ability to cut inside is essential. Whether or not they have killer balls, runs with ball, one-twos isn't a big issue, but the individual traits will influence how I mix things up if matches aren't going my way. I broadly tend to keep the same shape (I might go back to the W-W to change the balance of dfensive players), but will rottate or alternate players to, say, change a winger who runs with the ball to one who plays one-twos - provided they in a pocket with a mezzala who does something similar. Not sure if it makes a difference, but I like it...!

Outcomes:
Overall, I get fairly good results, but the goals I concede tend to be the longer ball/pass that beats my lone CB on the counter-attack. If this was real life, oppositions would have susses me by now! Either that, o rthe other team simply has better, faster, more competent players than me - which does happen. As a result, I generally either win comfortably or lose badly. fun playing with this though!

I'm not sure this is better than the W-W, but there's something about the single CB, dual HB that's so darn sexy! 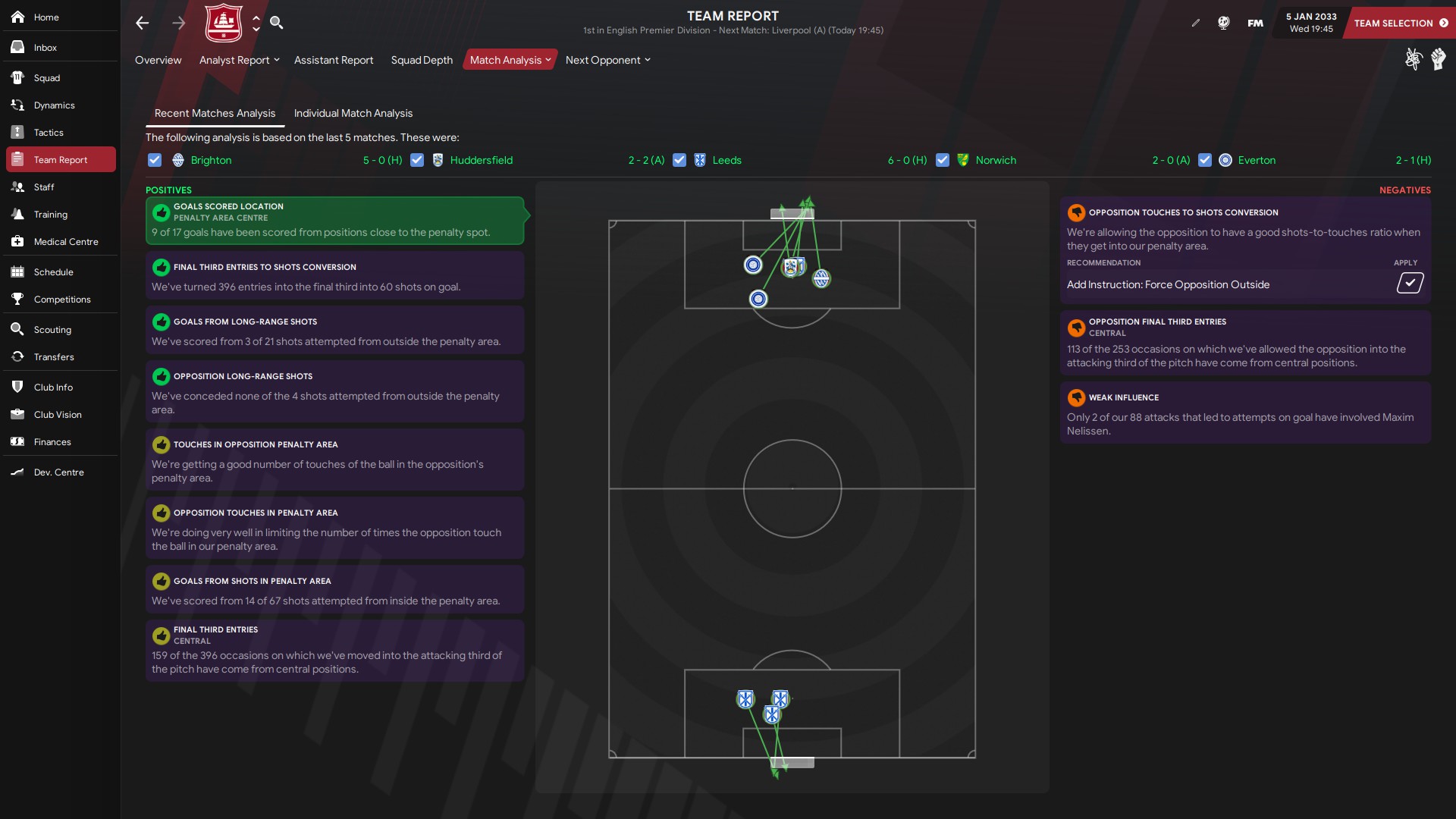