So for some time in FM, I've been trying to create a high pressing, high possession tactic that has near enough the whole team pressing. I am a life long Liverpool fan and tried numerous of times to re-create what Klopp has done into FM. This has through up a number of challenges and non more so than the annoyance of the IF's or IW's (Mane and Salah) not really following suit when its comes to high press.

Other formations may of worked, but I am quite stubborn and wanted to replicate it in a different way, I think I have. Narrow, 433 with Mane/Salah as shadow strikers to ensure of of their main roles is to press 'when out of possesion' as the description says, and also the bonus of them 'operation as one of the teams main goal scoring threats' just like Liverpool in real life.

GK = Alisson (Adrain in this screenshot) on Sweeper Keeper Attack. This just ensure he is always behind the high defensive line and ready to sweep up any through balls from counter attacking teams. No personal instructions.

RB = Trent - Complete Wing back (support). In real life, Trent has been a revelation and using him on complete wing back should bring out the best of his attributes.
Personal instructions:
- More direct passing - ensure he is looking for through balls and putting in telling crosses
- Take more risks - in essence is the play maker on this team
- Cross from byline - Encourages him to get forward and join the attack more often than not

CB = Gomez or Matip - Right side CB pretty standard. Ball playing defender (Defend)
Personal instructions:
- Dribble less (although Matip/Gomez do like to bring it out of defence in real life, I want to limit this to just VVD in game.)
- Shoot Less Often - does what it says on the tin.
- Stay Wider - When in possession, create better angles for passing.

LB = Robertson (Milner in screenshot) - Full Back (Attack). More hardworking and energetic than creative compare to Trent.
Personal instructions:
- Cross from byline - encourage to get forward again.
- Run wide with the ball - Always look to stretch the pitch and be an option for a quite narrow formation.
- Stay wider - see above

The midfield. Workman like, but don't be fooled by the roles. 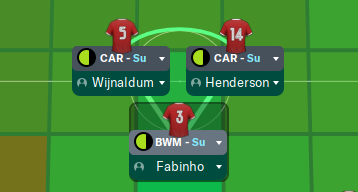 DM = Fabinho - Ball winning midfielder. Aim is to win the ball back high up the pitch, as will be playing a high defensive line it makes sense to use this role. Against the bigger teams or European away nights, could leave on defend or change to defensive midfield defend to add some stability, i personally encourage the high press, home or away.
Personal instructions:
Dribble Less - win it and pass it on or look for killer ball. Pretty much Fabinho IRL

CM's = Henderson and Wijnaldum. Could equally use the Ox, Keita or Milner. Carrilero, a word I always seem to struggle to pronounce. The shutter, covering lateral areas of the pitch and link defence to attack. Perfect. Box to Box could work, but seems to leave you more open and one (Wijnaldum/Keita) to Mezzala could work at home against weaker opponents. For maximum pressing, I leave both on Carrilero.
Personal instructions:
Right sided midfield - less creative or further forward
- Take Fewer Risks
- Shoot less often 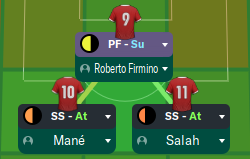 As before mentioned, the Shadow Strikers seem to give me the best performance for high pressing. The personal instructions differ slightly and will depend on which one you deem you're main goal scoring threat.
Personal instructions for right sided (Salah)
- More direct passing - once its in his area, we want to be direct
- Shoot more often - my main goal threat
- Roam from position - interchanging with Mane / Firmino

Team instructions:
Mentality - Positive. This gives us a nice balance of high press but then also retaining possession once won back rather than all out attack. 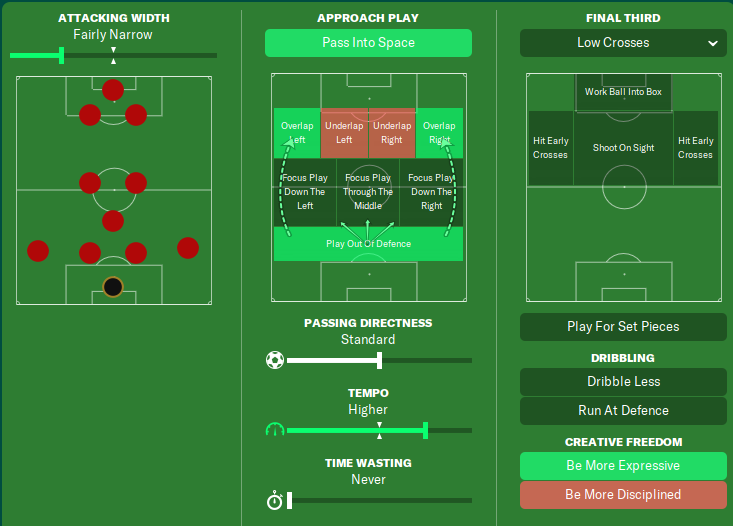 Narrow attack
Pass into Space to use pace and movements up front
Play out of defence to use VVD and TAA.
Standard passing with a higher tempo to focus on high press but still not very high tempo which probably causes more turnover.
Be more expressive when we have the ball. Important due to nature of midfield 3 roles.
Low crosses. change on preference of your front 3. 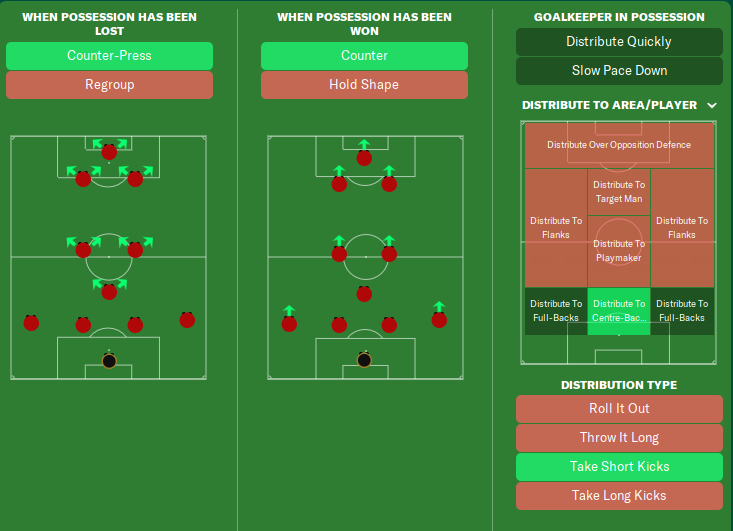 No real surprises. All as you'd expect, looking to focus on that high press and counter pressing game. 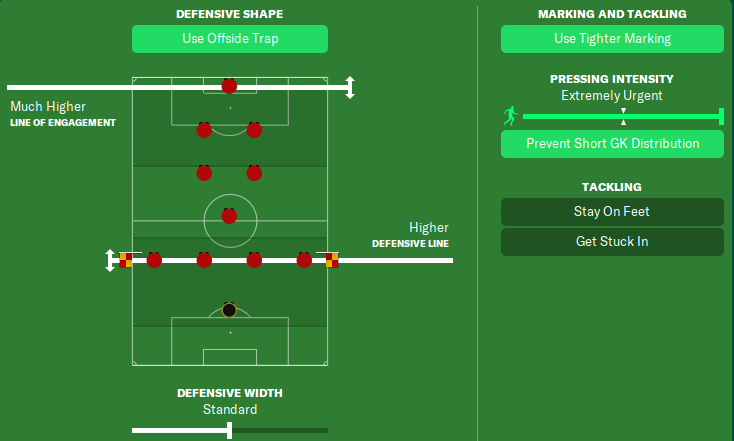 Again, as you'd probably expect. Not much higher defensive line, although can be switched if needing a goal late on or against a team with a really slow attack.

Extremely urgent pressing to push for that high press.

As said, this is my attempt at trying to mimic how Liverpool play IRL. The results have been amazing and the high press is noticeable the best I personally managed to get it. There could be a few tweaks here and there so open for some feedback too. 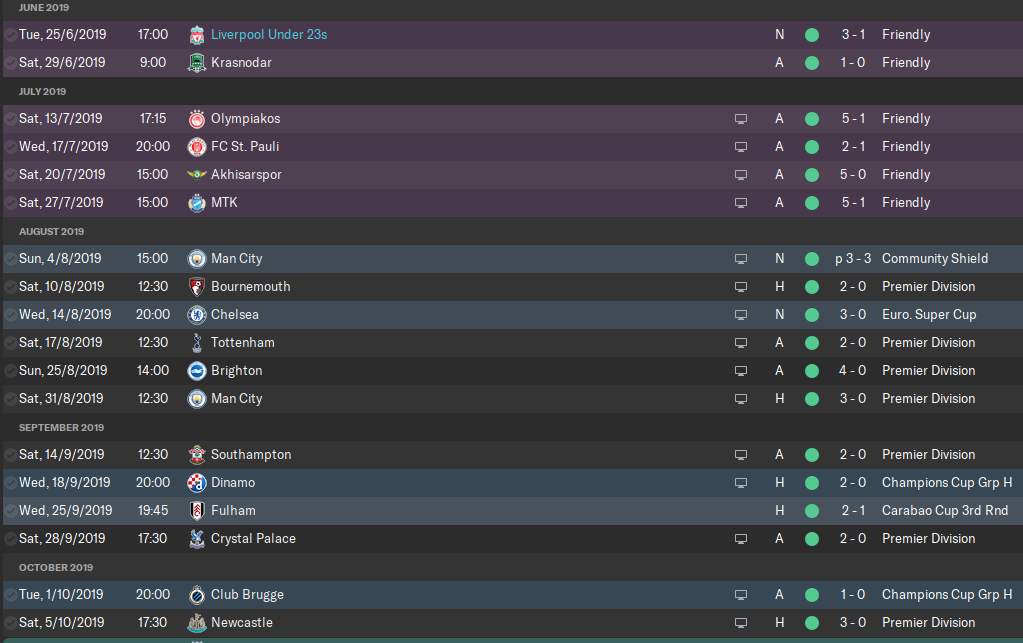 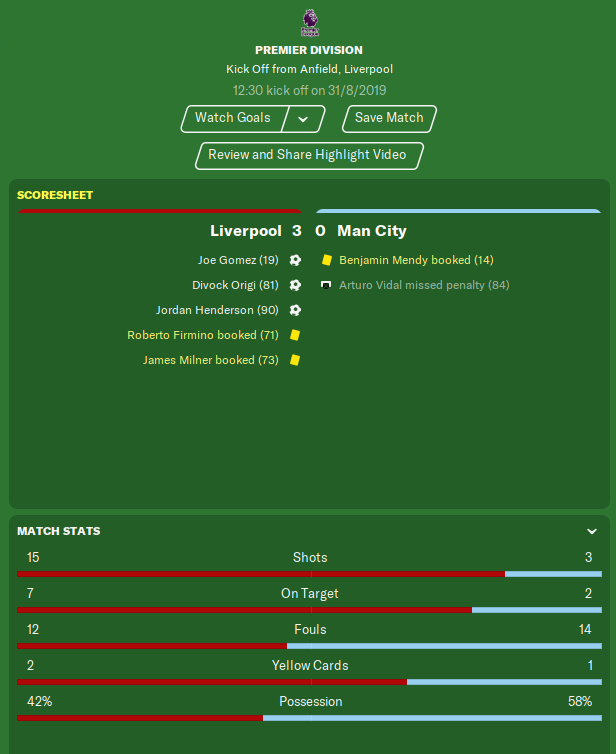 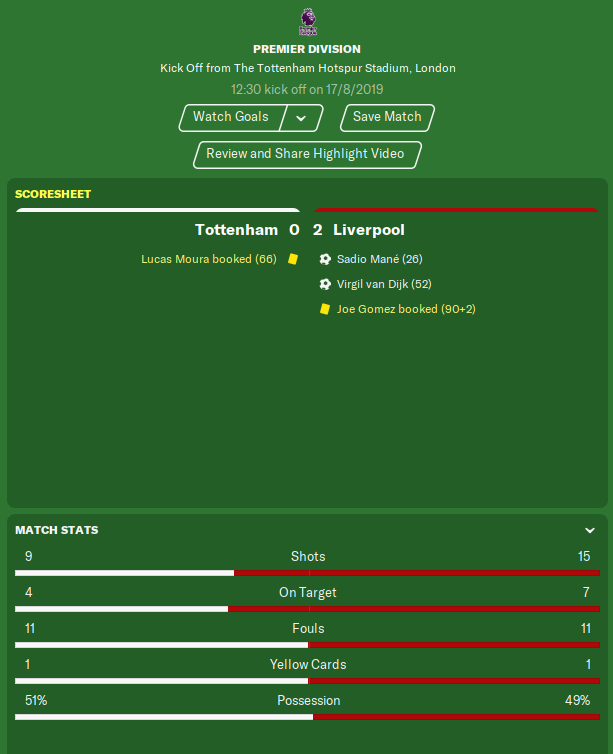 Although both don't have high possession, this is probably due to the nature of how Pep and Jose set up their teams. Results matter in these cases

In the process of testing this with Dortmund/Spurs and Debrecen. I'd imagine it would work with anyone with a similar setup so please let me know if you're testing it.