Download
Overview History Discussion
Like most others I usually downloaded tactics and cared less to fiddle with it myself.
But Football Manager is all about giving the players an experience to dwell into their football knowledge about playing styles and Philosophies.
Being a Manchester United fan, I used to take them in every game edition but what's the fun in that ?

This edition however I wanted to challenge myself in other leagues and try to restore or create new history of winning trophies with other clubs.
One such league was Serie A. Juventus have been the dominant force for years !! And it gets to a point where as true football fans we hate to witness such domination.
So I decided to choose a team that can knock Juventus off their perch !
And that was Napoli.
I thought of taking either of the Milan clubs and try to restore them back to their glory days, or even Roma or Lazio.
But I had my mind set on Napoli and that decision can be solely credited to how the team came real close to challenging Juve with their attacking philosophies instilled by Maurizio Sarri known as 'Sarriball"

I sat through videos on YouTube by notably 'Tifo Football' and 'Football made simple' how they dissected Sarriball.
i wanted to emulate that sort of a tactic in Football Manager
And to my surprise the tactic absolutely destroyed the league with Most Goals Scored, Least Goals Conceded and Best Tackle Completion.

Mertens as False 9 was revolutionary like he was for Sarri
I knew Sarri's tactic relied heavily on Jorginho. I did'nt enable the first season transfer window hence I had to go on with what I had at my disposal.
Step forward Stanislav Lobotka (Most key Passes and Player of the season)
I wasn't sure what role I would give my DM
At first I chose the in - game Vertical Tiki-Taka tactic which used a Regista
I was intrigued by its use and trained Lobotka to be on
And to my surprise he was my Best player on Average Rating.

Training and opposition Instructions were assigned to my Assistant Manager.
I hope you all try this tactic,
Below I have attached Screenshots of my Tactic and the results.
Cheers. 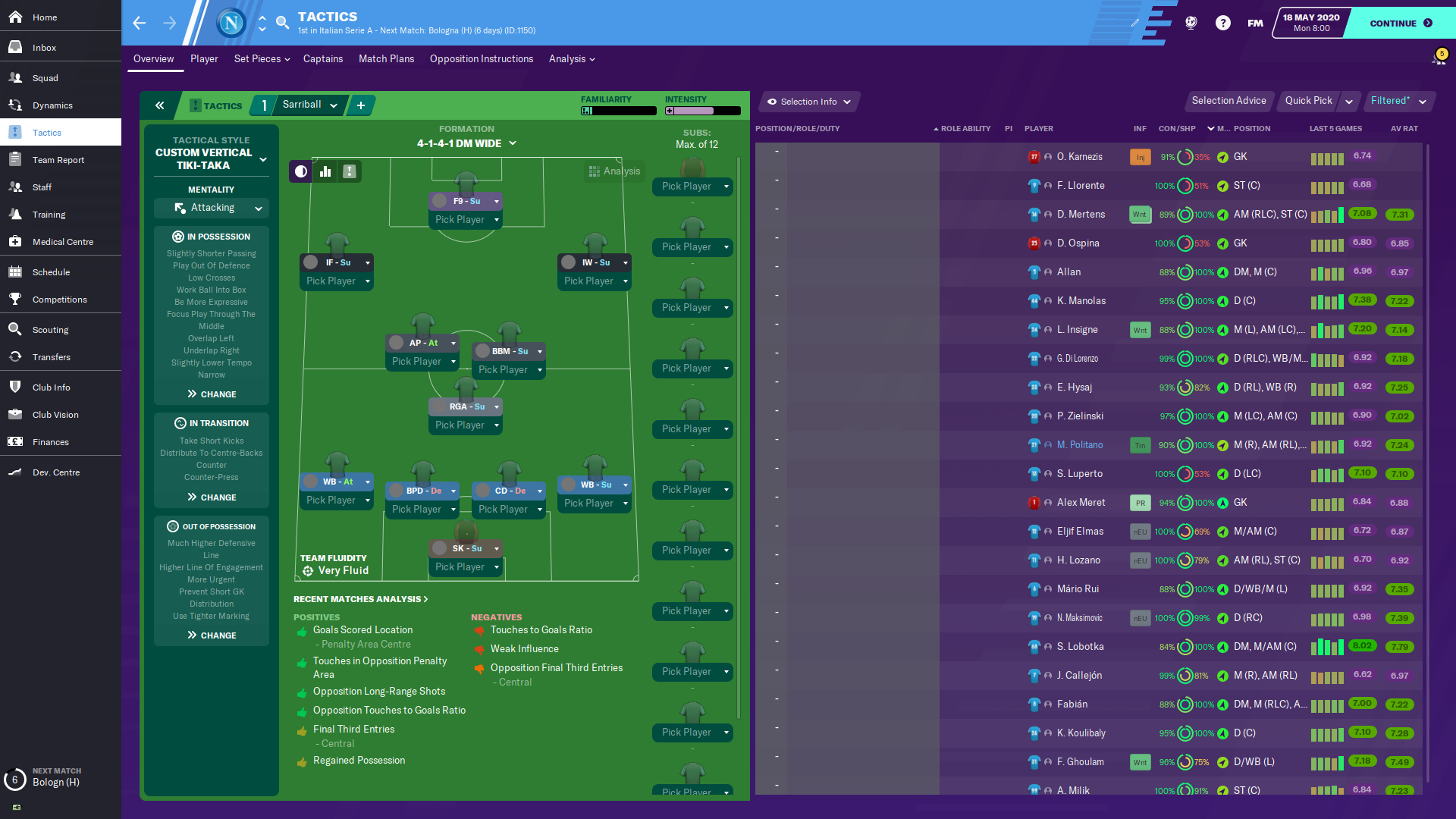 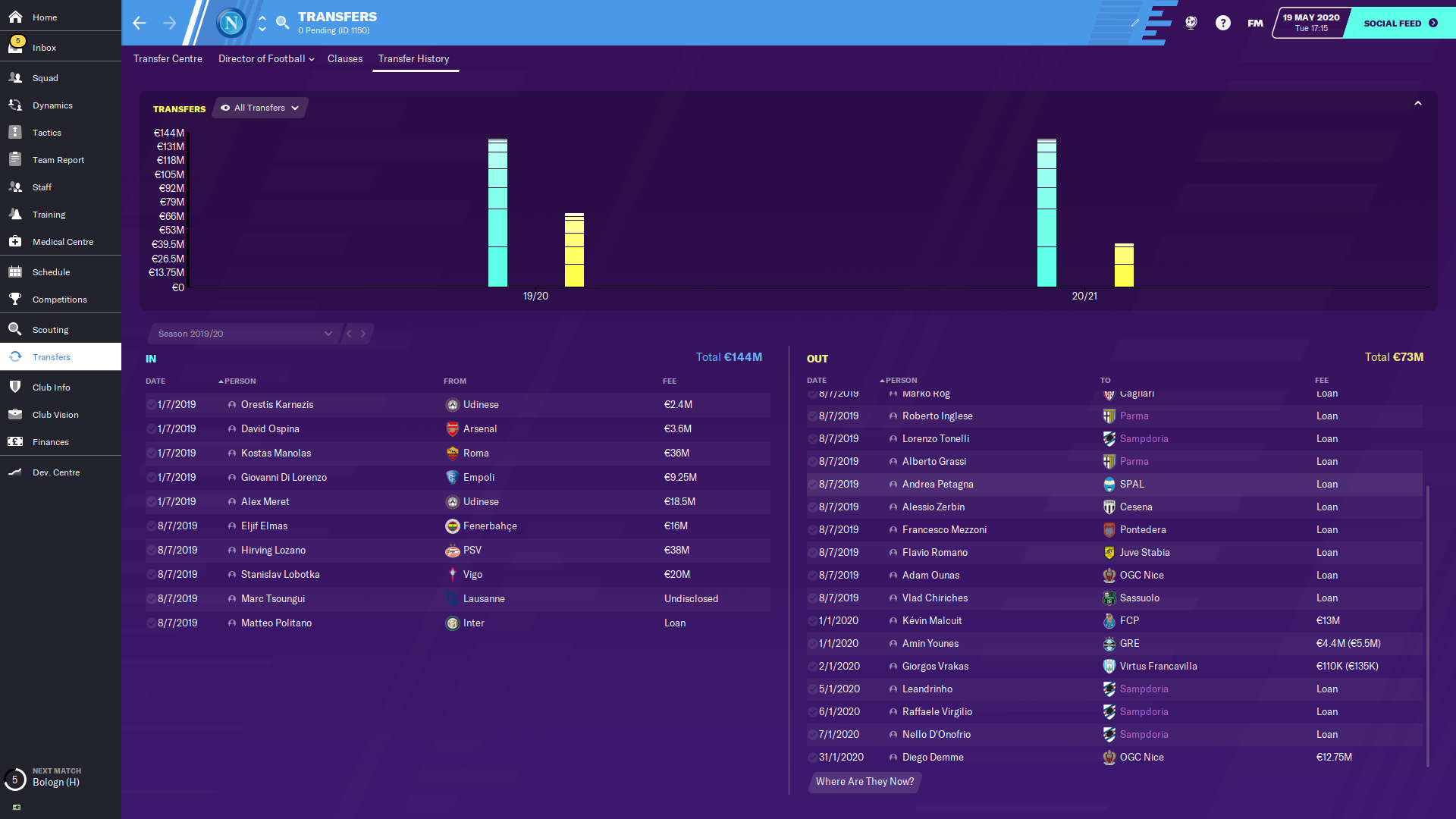 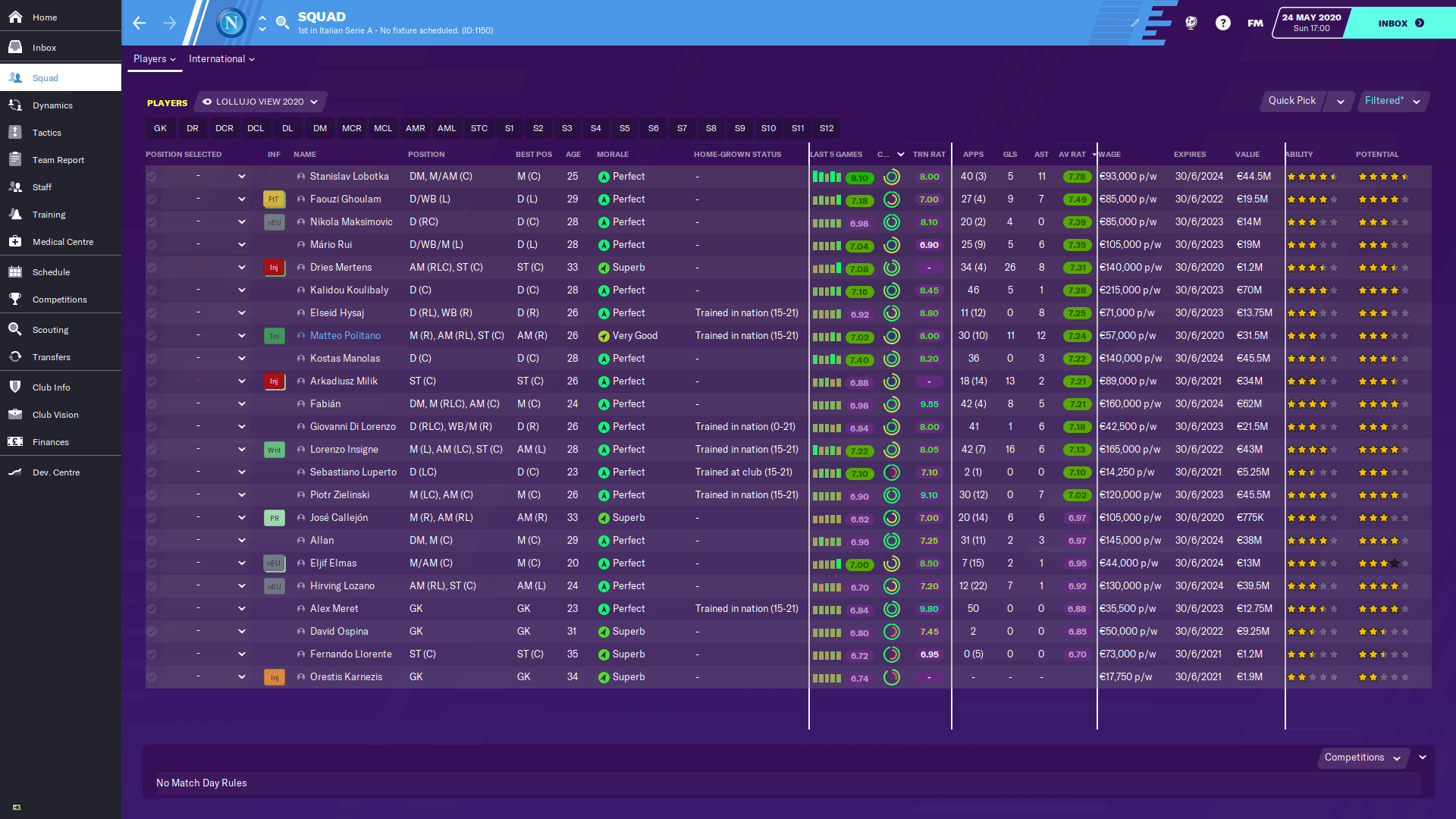 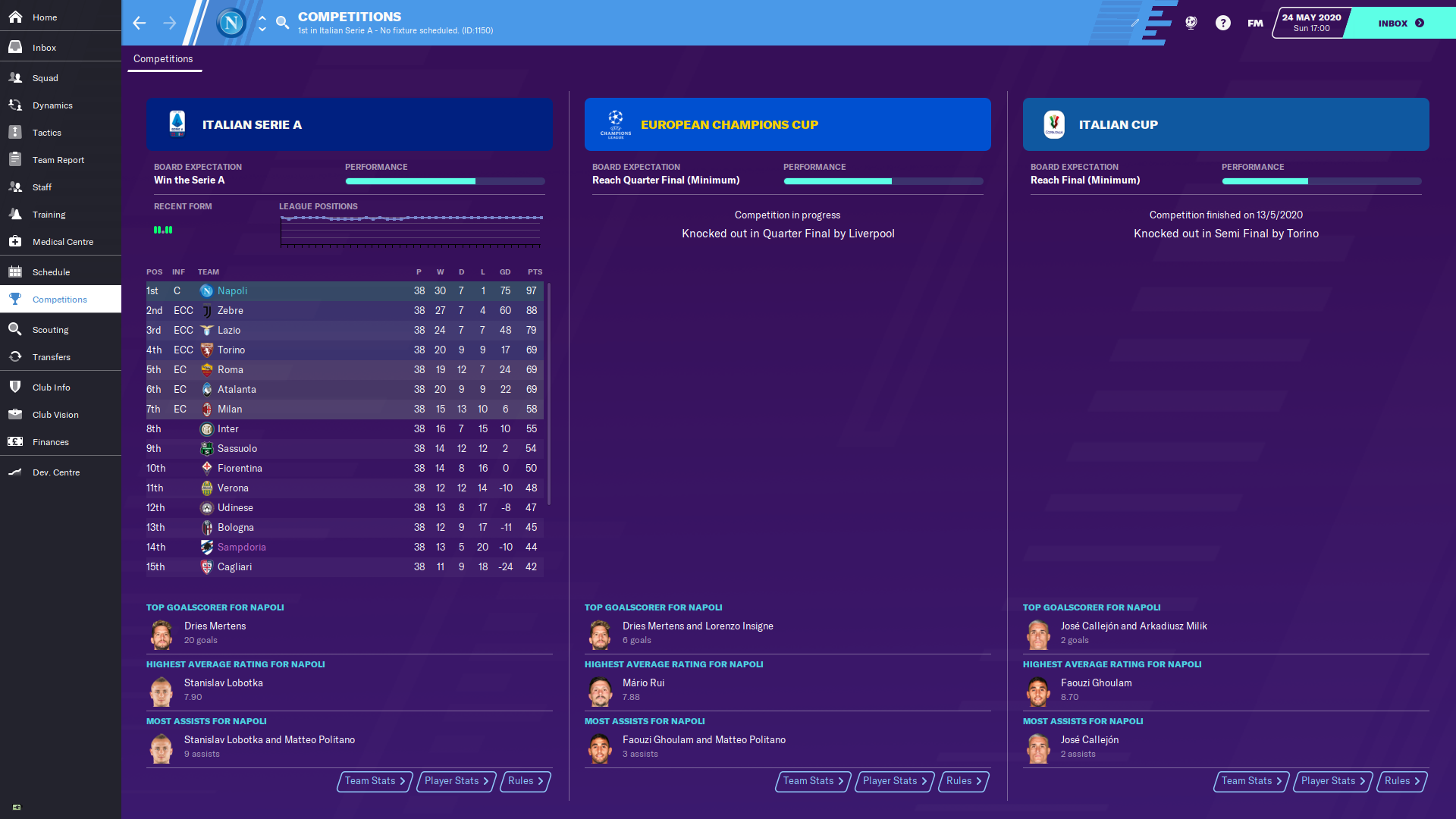 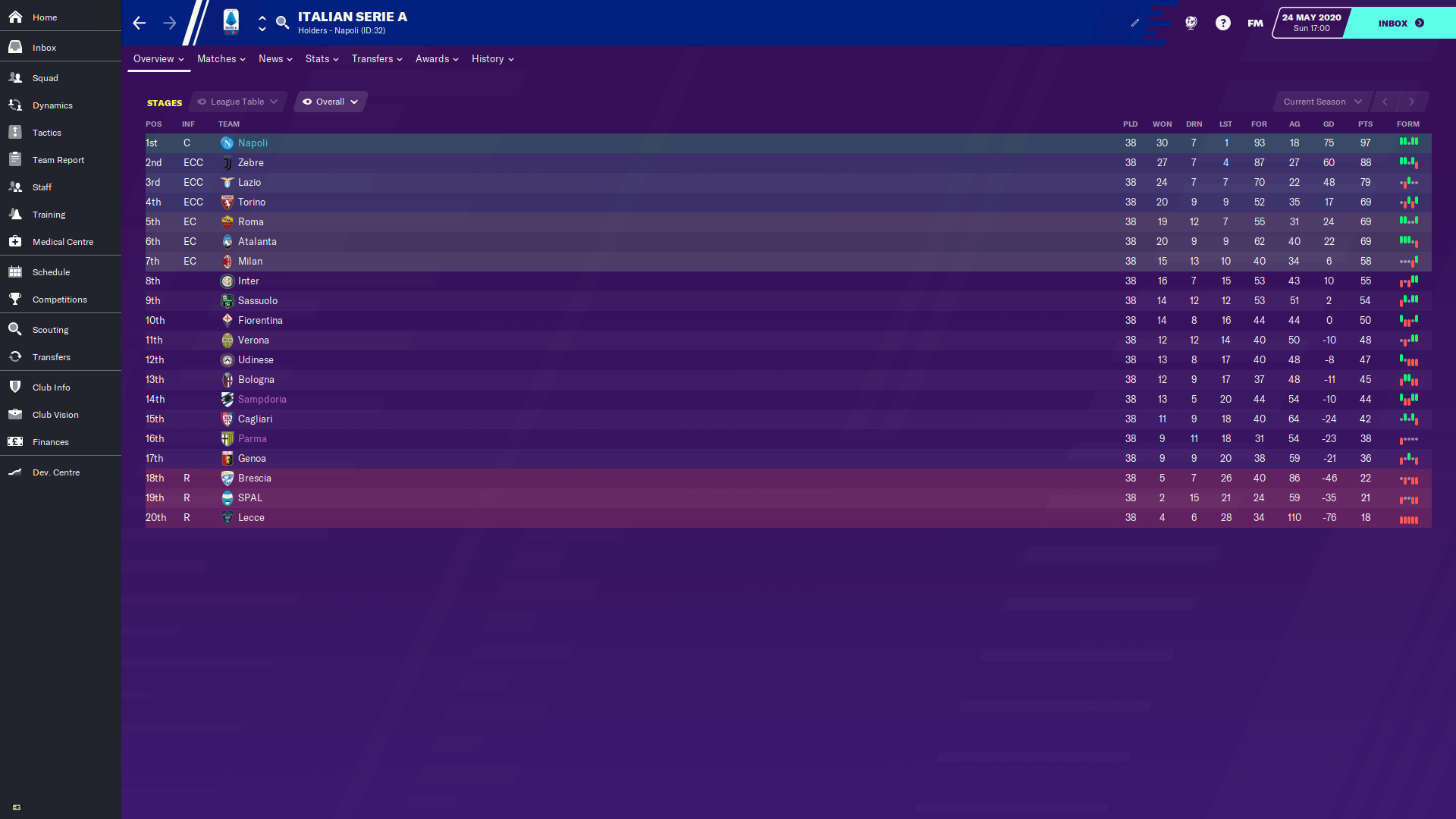 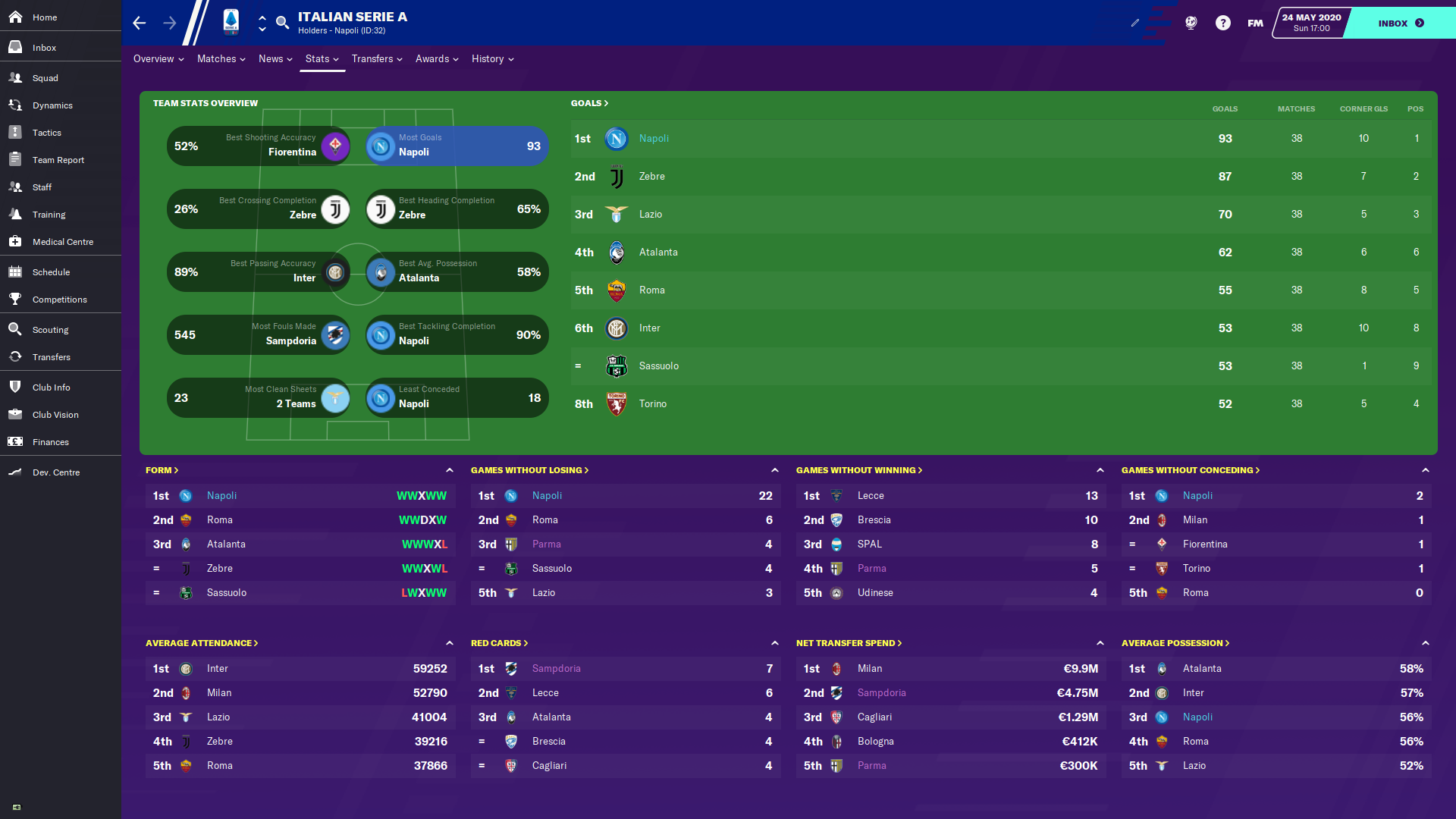 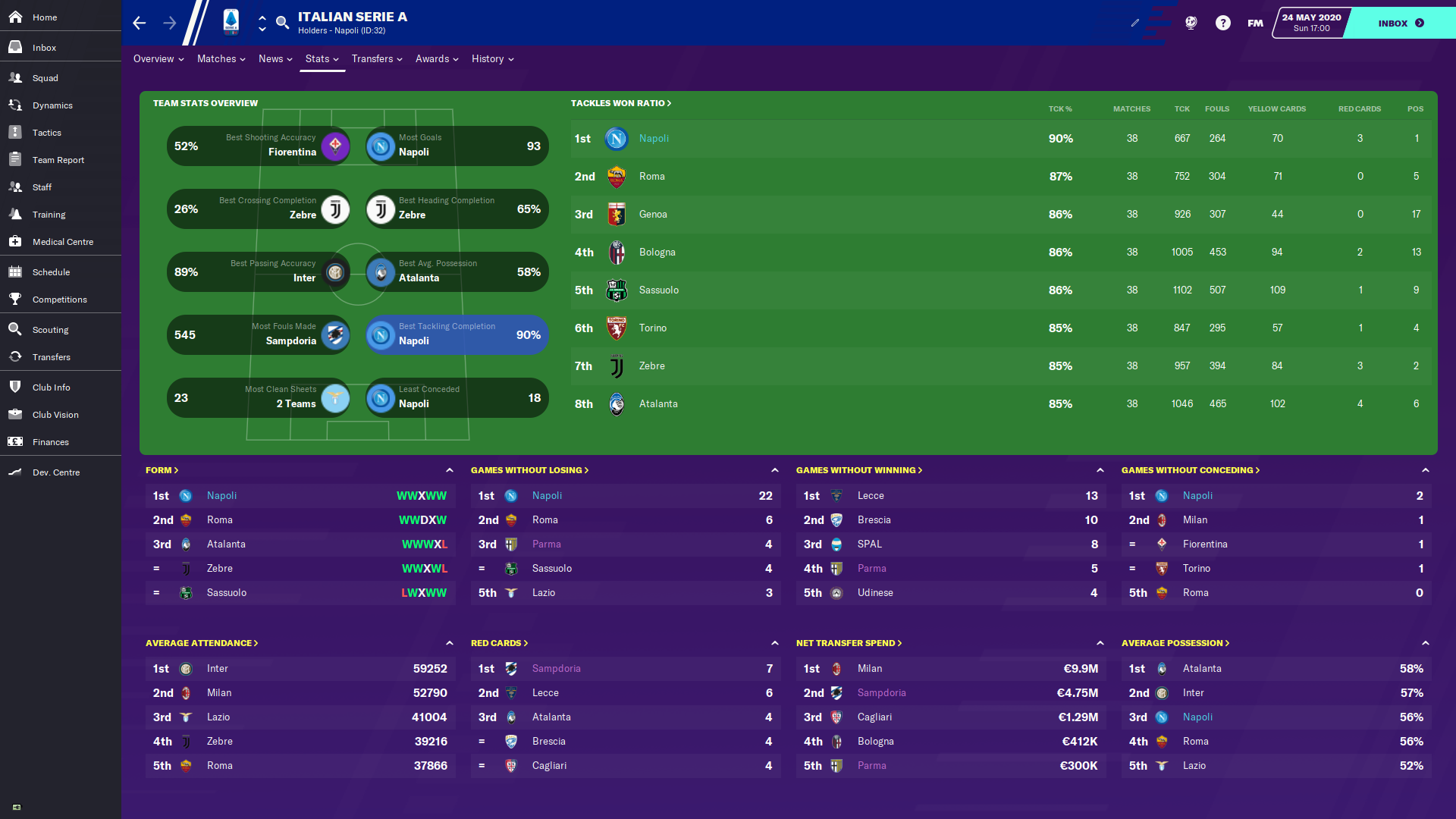 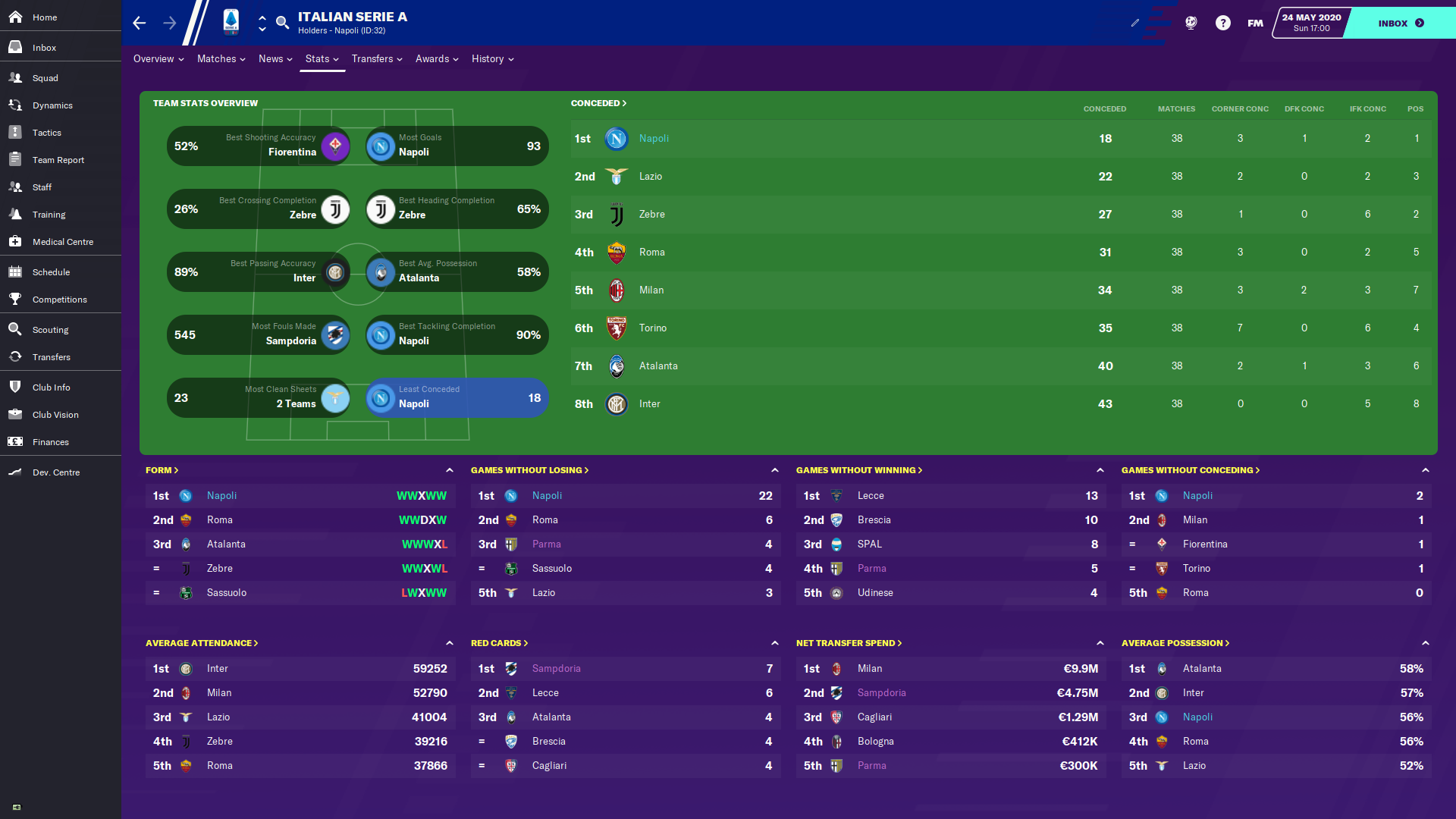 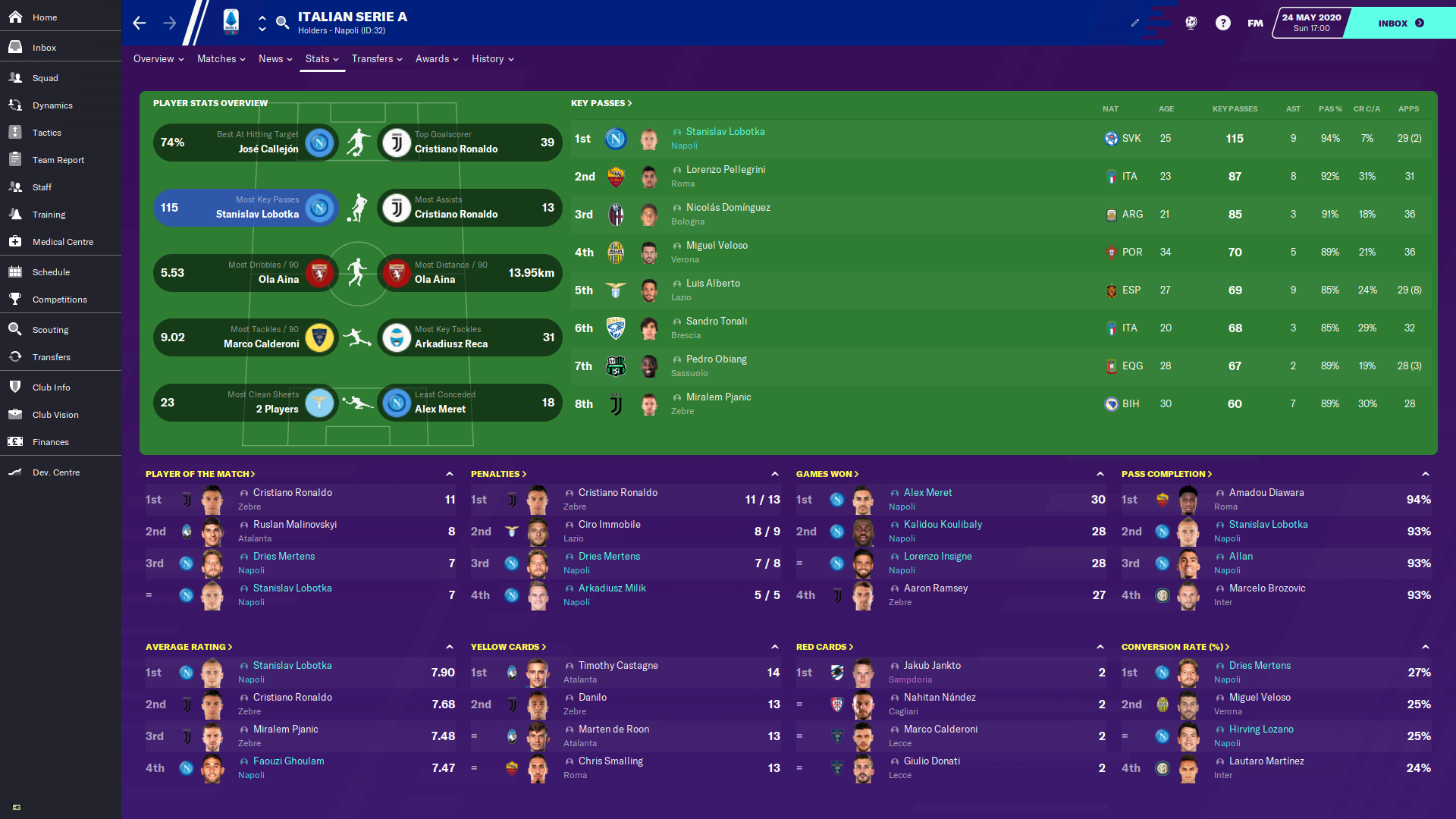 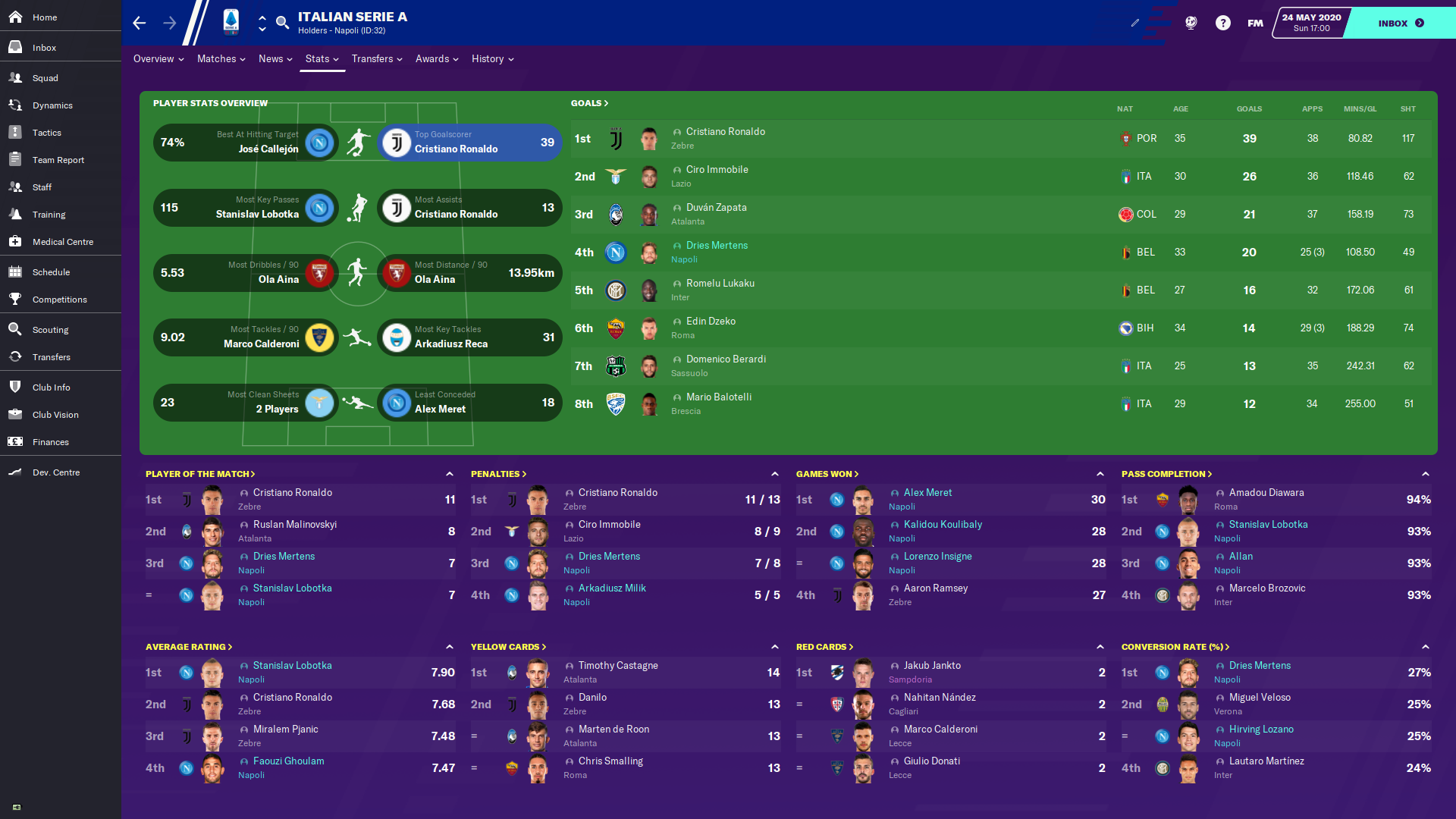 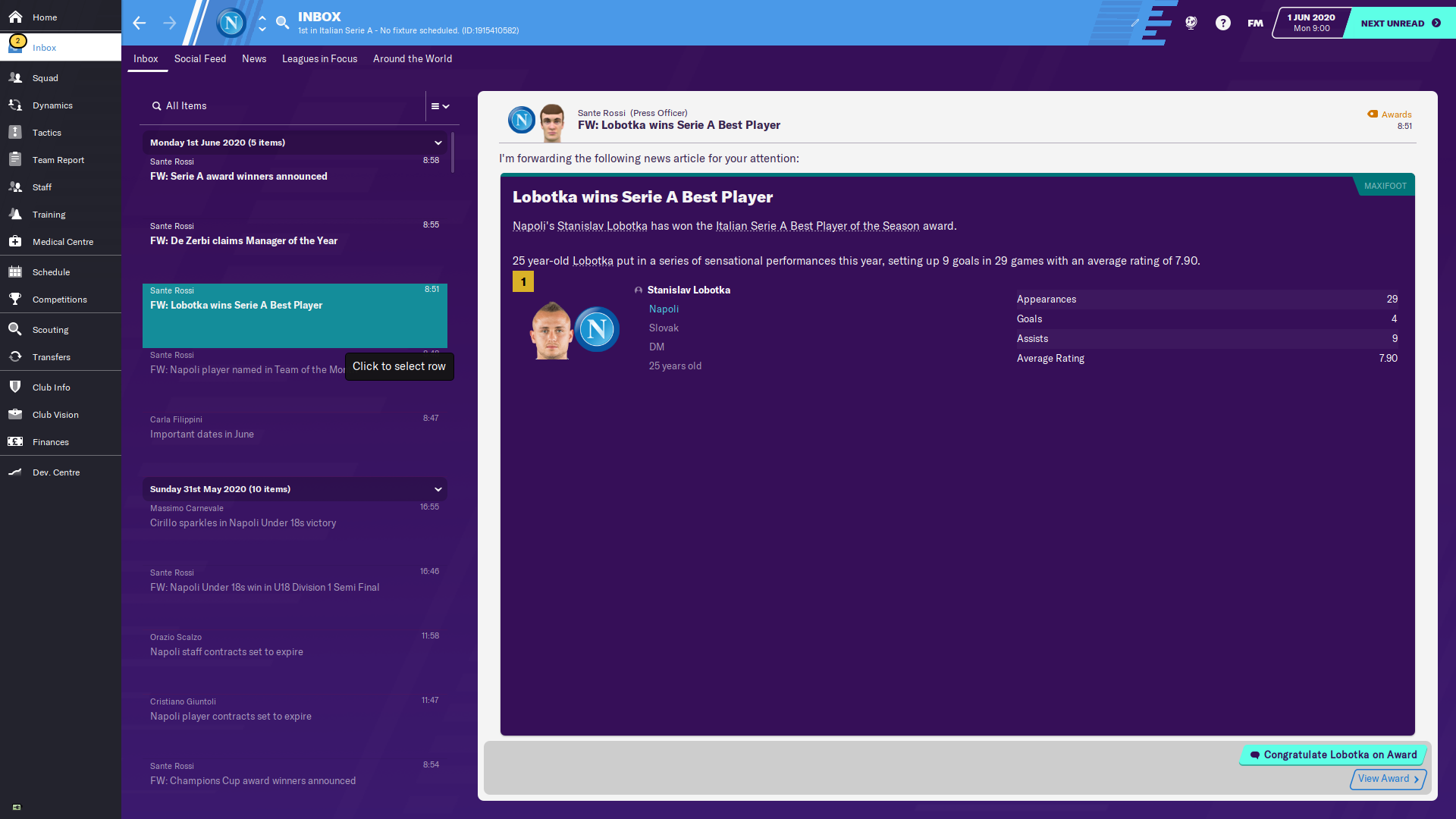