I've been using this tactic since FM21 and still using it at FM22.
It's a classic 442 formation, inspired by Sérgio Conceição at FC Porto, Portugal.
This tactic is suitable for all teams. Better the players, even better the results. It can provide consistent results.
The overall team instructions, player roles and instructions have been fully tested and tweaked for more then nine months, so believe me I've tried it all. So, the tactic is at the point everything is full balanced to achieve the desired victory and to overachieve. Fully tested at FC Porto, some lower leagues teams like U. Leiria, U. Santarém, etc., and in FM22 tested severall seasons with Boavista.

The Tactical Philosophy
Every player needs to be aware of their role in team. So a attacker needs also to press, defend, recover ball and assist. No one is a lonely star, they are stars of a bigger constellation where team work is the most important. If a star doesn't do the job it can help the club going elsewhere in return of money to move the club to the next level.
In a practical way, it's a tactic of simple processes. Defend, Press, Recover, Try to Pass or Cross to Attack and Score. Even Goalkeeper can provide nice assists.
Beautifull to watch.

Set Pieces
It's an attacking tactic, but all set pieces (defending and attacking) were picked to provide many counter-attacks events. So, against a big team that is pushing your team against your net, many times you can get a ball recover that will make you score an goal.
If you get both DCL and STCL with high Jumping Reach and Heading, you'll get regular goals from corners.
If you have an set pieces specialist (corners/free kicks) you'll be amazed.

Dominate
To dominate the game, both in attack and defense, in a long term, I prefer to search for fast, tall and strong players.
Even if sometimes you can't afford the more technical players, those three aspects will be essential to recover ball possession, effective pressing, deflect opponent intentions and to score. You dominate the air you dominate the game. At any league level but mostly at lower leagues.

The Roles
Sweeper Keeper
Better the keeper, less goals against. It need to be able to to provide nice long kicks to attack. Forget keepers that miss those kicks or passes very often.
Individual training with focus in GK Reactions and later GK Tactical.

Central Defenders
Get them fast and tall if you can. DCL jumping reach and heading will be very important at corners attack. Prefered foot should be the same of side he's playing. So DCR right foot, and DCL left foot.
Defensive Positioning (Marking, Position, Decisions) is a good individual training.
Why not Ball Playing Defenders? You can use them, but it's hard to get them on lower leagues and even on Top Teams they tend not to pass the ball so fast to the other players, and it will in a long term make team being less balanced. I want them just to defend and pass fast to more creative players.


Wing Backs: They need to do the defensive job, but even more effective in attacking transitions. On each side they make an effective duo with the wingers. Both corridors are used for fast transitions between defense and attack, not giving enough time for opponents to get back for theyr defensive positions.

Wingers: Faster the better. Preferred foot should be the same as the side they play. It can be fun for seeing them with inverted feet, but in a long term the team will not be as effective in the global play. Exception for Luis Diaz at FC Porto (now Liverpool) he can be amazing. Try and test your players.
I prefer to train AMR to MR and AML to ML, instead of training WBR to MR or WBL to ML.
Believe me, wing backs could be very good here to provide a better defense, but attacking players will be more important to attack.
These positions require patiente, because you should training them for the positions:
MR and ML Winger Attack. Choose the focus you think they need to improve. Passing could be a good choice (Passing, Vision and Technique)

Midfielders: The DLP/BWM combo. Theyr job is to provide passing options to the players (all) around them. They recover and pass keeping the team balance.
Altough an attacking creating DLP can be good at attack, it should have some marking, tackling effective attributes, because every ball you recover is one more goal attempt for you and one less attempt for your oponnent. As BWM, it needs also to be good in passing, decisions an vision.
I tend to train MC with focus on Passing (Passing, Vision and Technique).

Advanced Forwards: They provide help on defending set pieces, and constant pressing on opponent central defenders and keepers, blocking lines of pass and don't letting them to advance in field. This make opponent more likely to make an error that will give us a scoring chance. Tall, strong and fast players will perform better.
I always train them for Finishing, even if they don't improve in attribute. It seems to makes them more effective in scoring goals.
STCL should always be the tallest one. Prefered foot doesnt matter very much here. 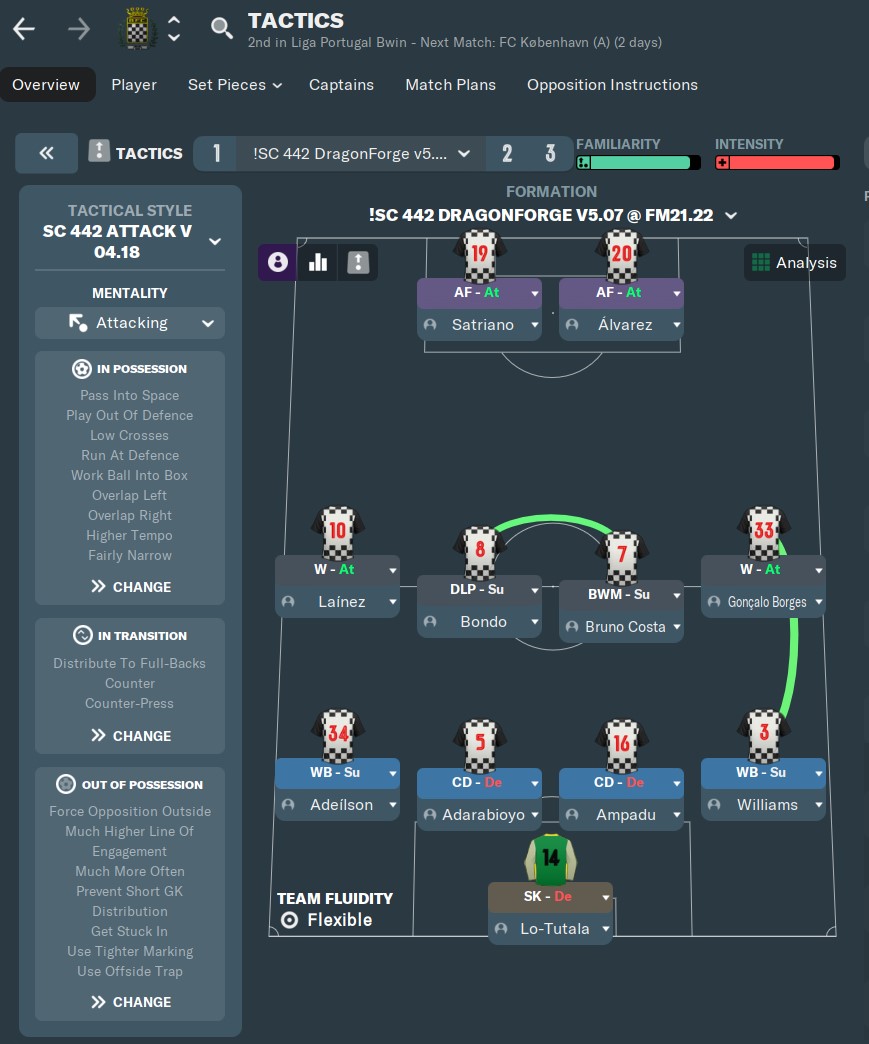 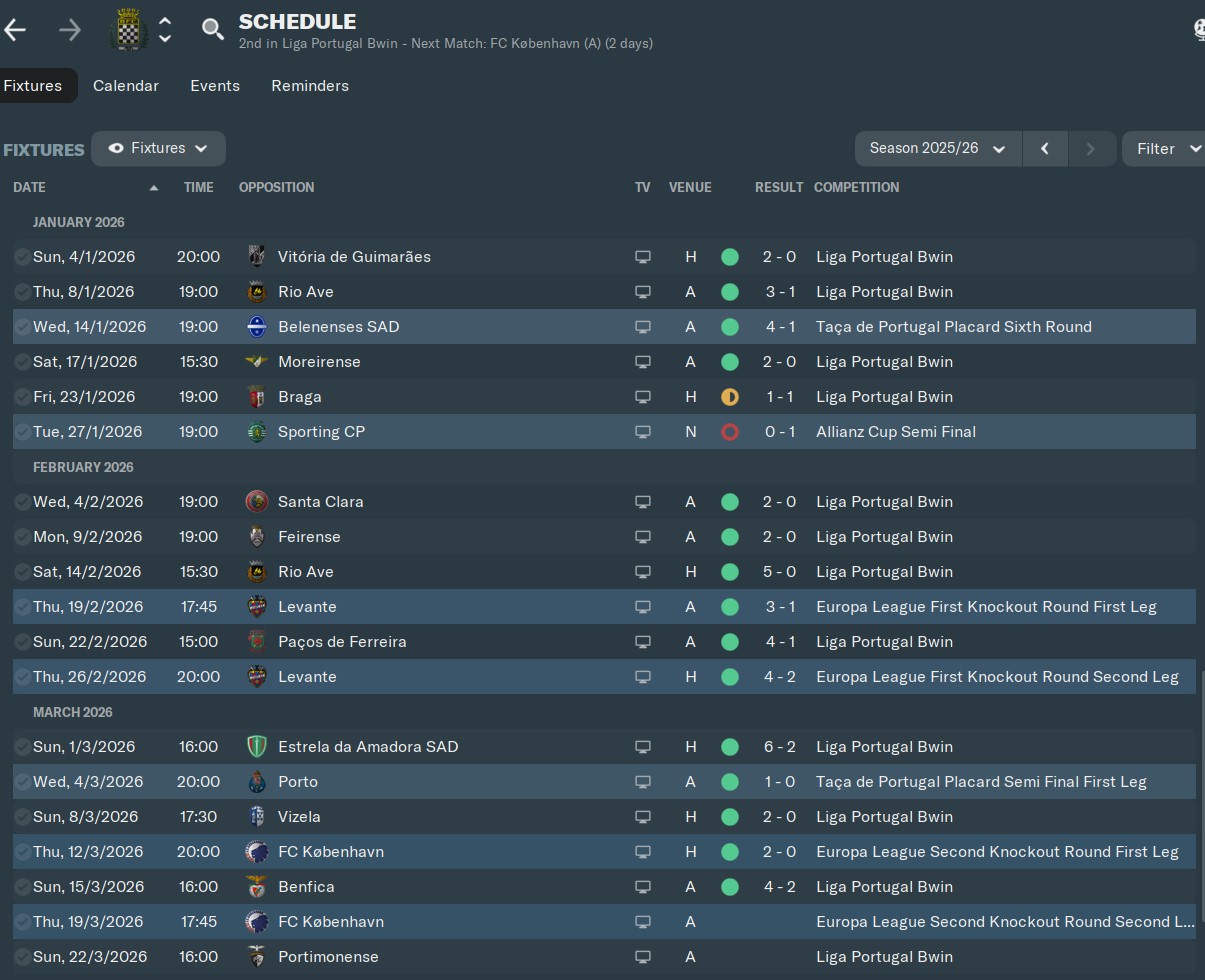 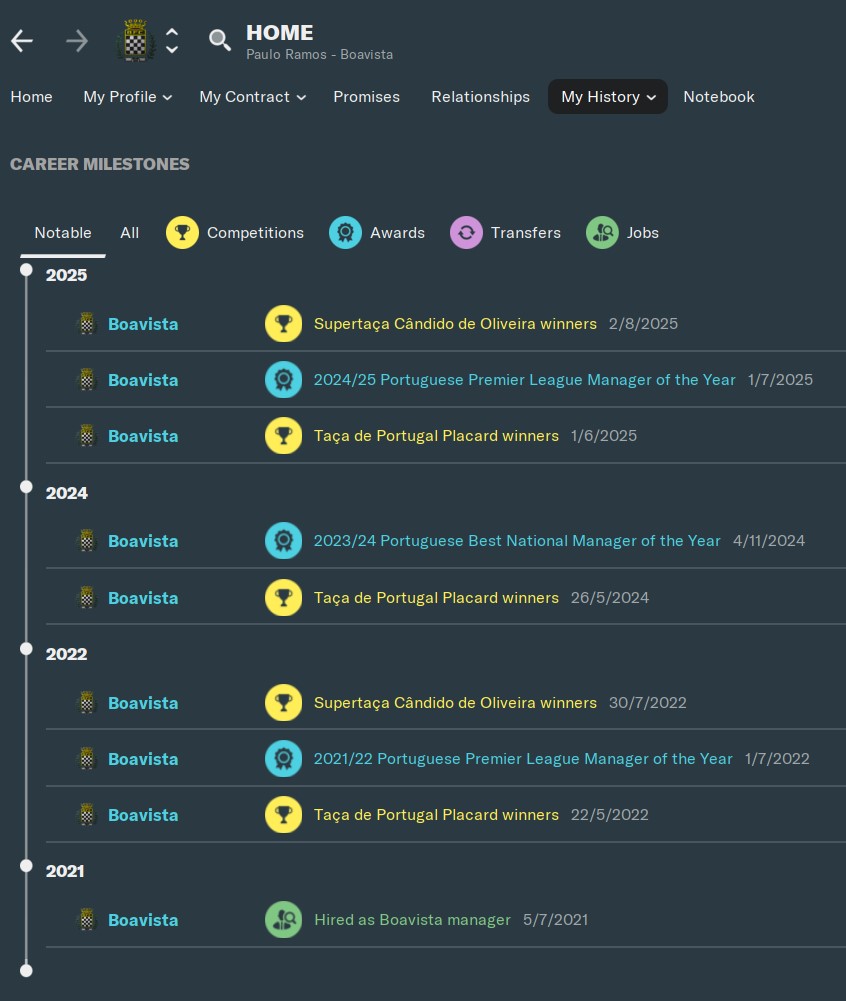 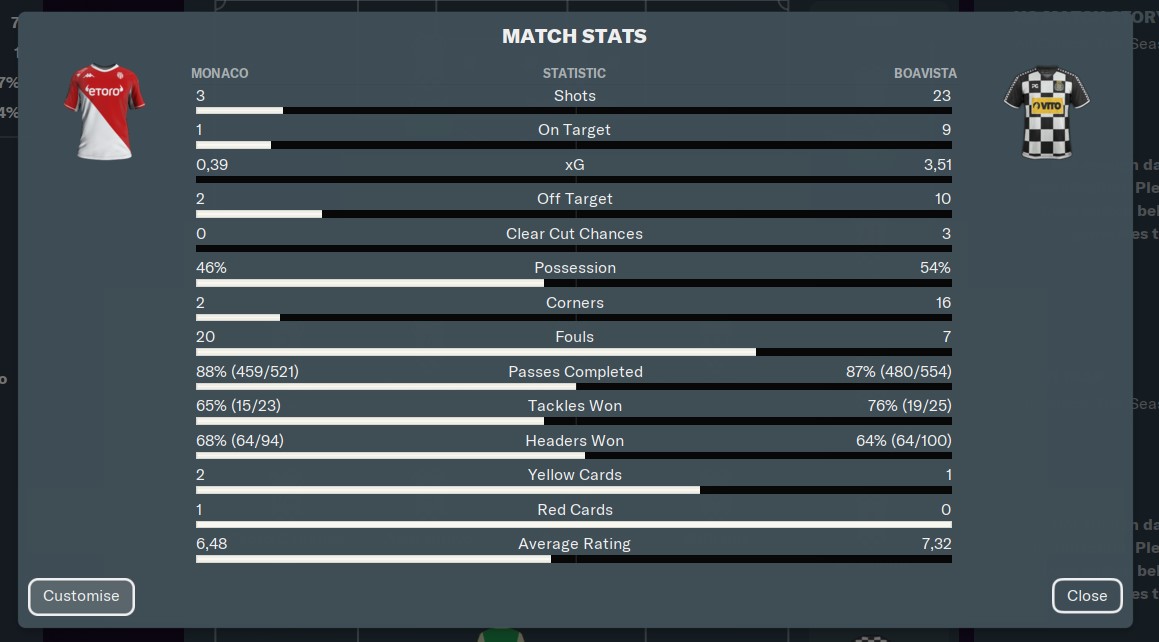 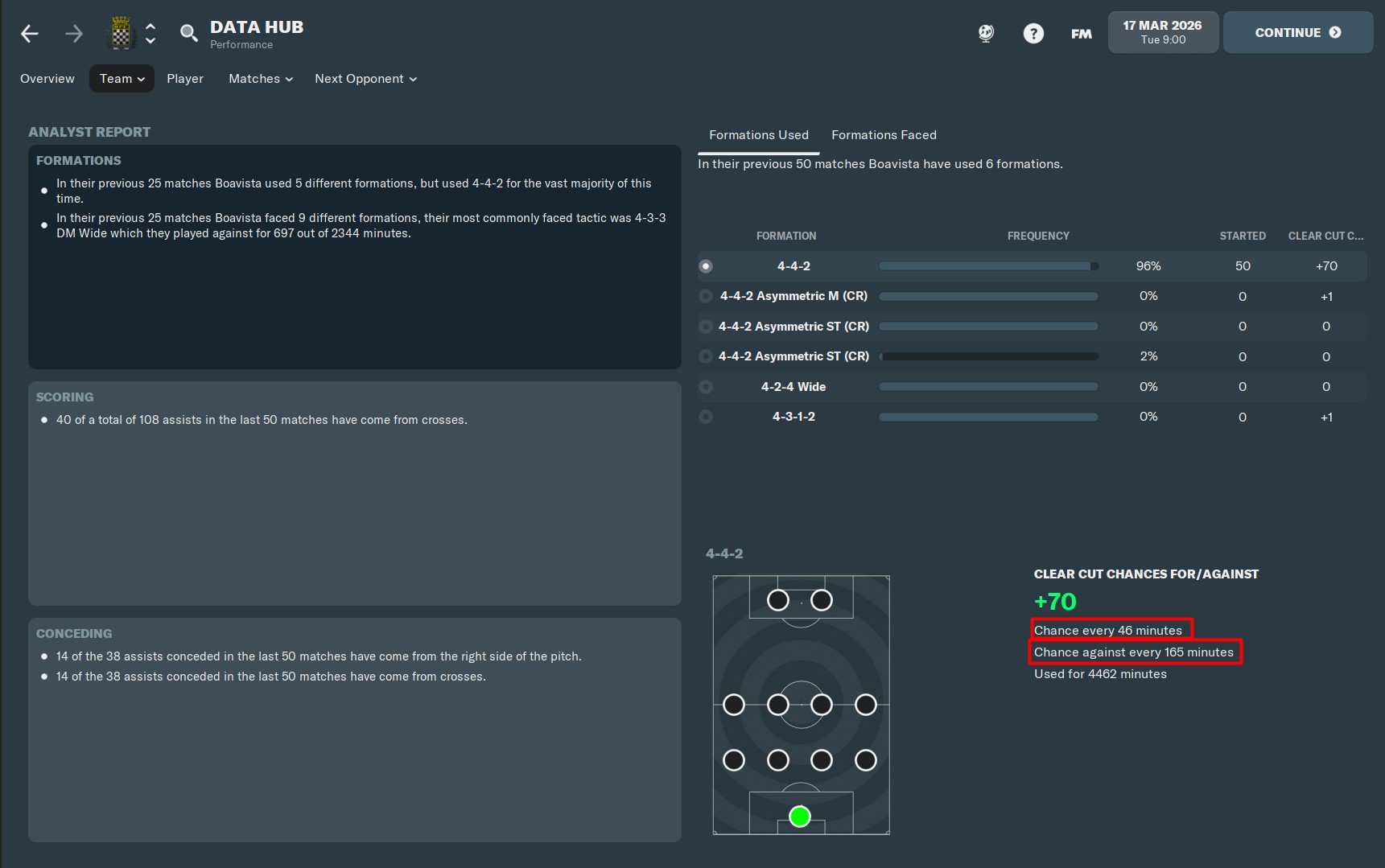 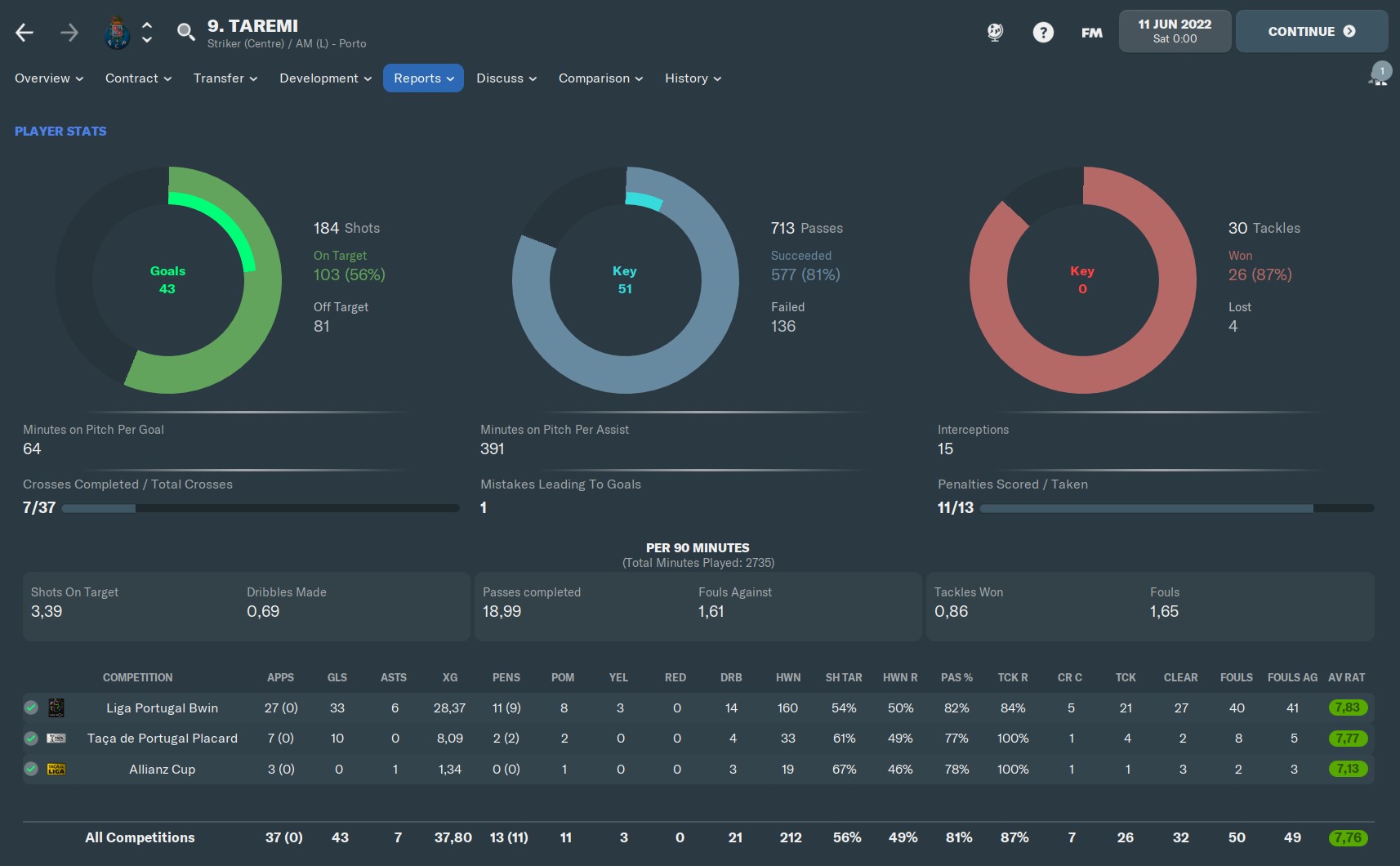 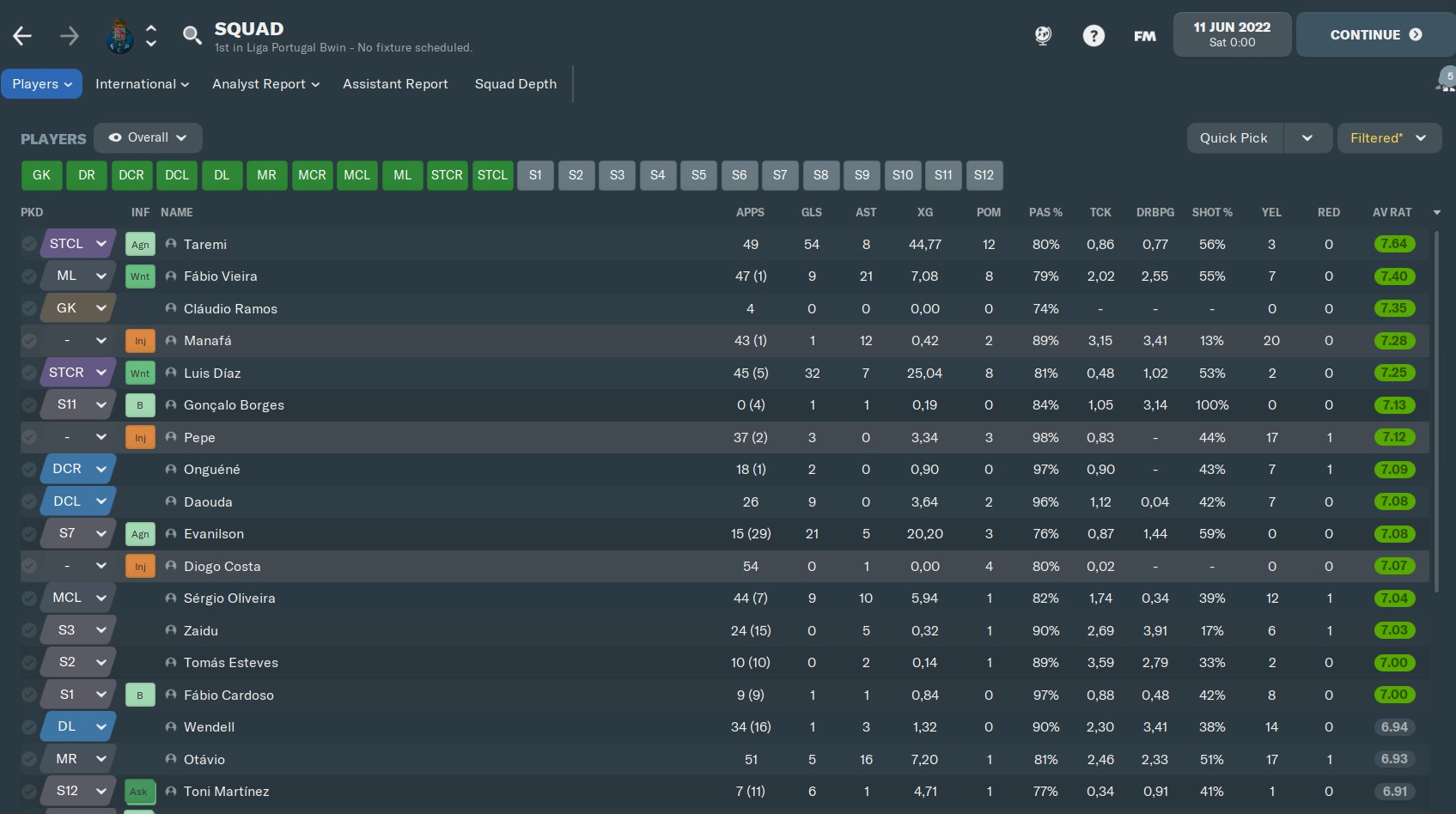 Important Stuff:
No OI's at all. It will break the tactic.
Rotate your team. It's an intense tactic and players need to rest to perform a full season.
On a yellow card, tick Ease Off Tackles.
When getting an red card:
1. Remove BWM and move DLP to center
OR
2. Remove STCR and move STCL to center

Away or Home against bigger teams:
less then 1 goal advantage: Encourage
1 or more goals advantage: Praise

It requires some tactic awareness before a full performance.
Enjoy it, it's the best I have and always play with this tactic for nine months. It's pleaseant to watch.

I would say the pictures speak for themselves. The tactic is more like good.
Read more…