Download
Overview History Discussion
Although in the current season, Sheffield United are struggling massively, in previous seasons they have been an entertaining and fairly successful unit.

The linchpin of intrigue surrounding them has been their utilisation of overlapping centre backs and the benefits and drawbacks this has brought about. 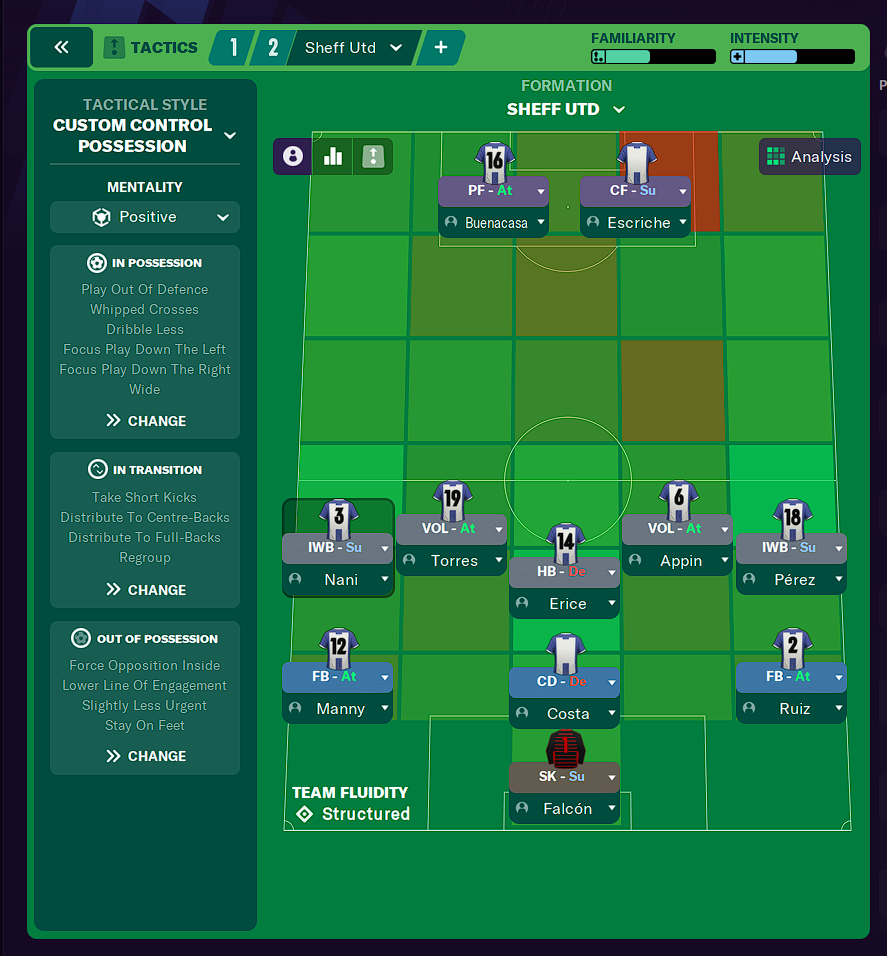 In the defensive phase, they look to sit fairly deep, rarely ever pressing men directly. The midfield 3 will often split wide to press wide midfielders or attacking full backs. The strikers will drop deeper, aiming to cut passing lanes between defenders and midfielders, rather than stopping short passes from the goalkeeper. This will force the opposition to go long and given the 3 central midfielders, plus 5 men in defence, most headers are won.

To avoid being countered, they look to drop back as quickly as possible. One of the midfield 3 will usually stay back to aid the central centre back.

In attack, Sheffield focus almost entirely on building up out wide. The outside central midfielders can look to push wide if necessary, however this is usually facilitated by the wing-backs. As the play progresses, the wide centre backs will look to push forward, in support of the wing-backs. As such, the wing-backs will cut inside with the ball, looking to shoot from distance or offload the ball onto the wide centre backs, to then make a run into the box. The central midfielders will run into the box once the ball is in a crossing position. One striker will usually support the wide areas on the ball-side, whilst the other will await the cross. Should they come up against a team playing a high line, the strikers can look to run in behind on the counter, usually in the half space between where the centre back and full back would be.

GK: Sweeper Keeper (Support) - although in real life this role would more likely be a Sweeper Keeper (Defend) or just a normal Goalkeeper - I feel it's better to have the keeper ready to sweep up any long balls, given the attacking nature of the defence.


LCB/RCB: Full Back (Attack) - this is probably the most questionable choice in the tactic. Having a Ball Playing Defender on stay wider and dribble more just doesn't deliver what is required in this tactic. That then leads to the need to use full backs instead of centre backs. In terms of the role, either Wing-Back (Support) or Full-Back (Attack) could be used. In game, the Wing-Back (Support) role seemed to be slightly slower at getting back into position (not sure if this was just a fluke) and as such, I decided to use the Full-Back (Attack) roles. I have added the player instructions to 'sit narrower' and 'run wide with ball'. This is to guide the player into sitting narrower than a Full-Back would normally be in defence, whilst then instructing them to overlap the Wing-Backs in attack.


LWB/RWB: Inverted Wing-Back (Support) - This is the part of the match engine that I'm not fully certain on. The description