Download
Overview Updates (2) History Discussion
All aboard the SS Gegenpress!

Unashamably inspired by Bielsa's relentless pressing and positive style of play at Leeds this year (and literally every club/country he's ever managed at), this tactic aims to try and replicate the positive elements whilst attempting to sure up the defence a little. 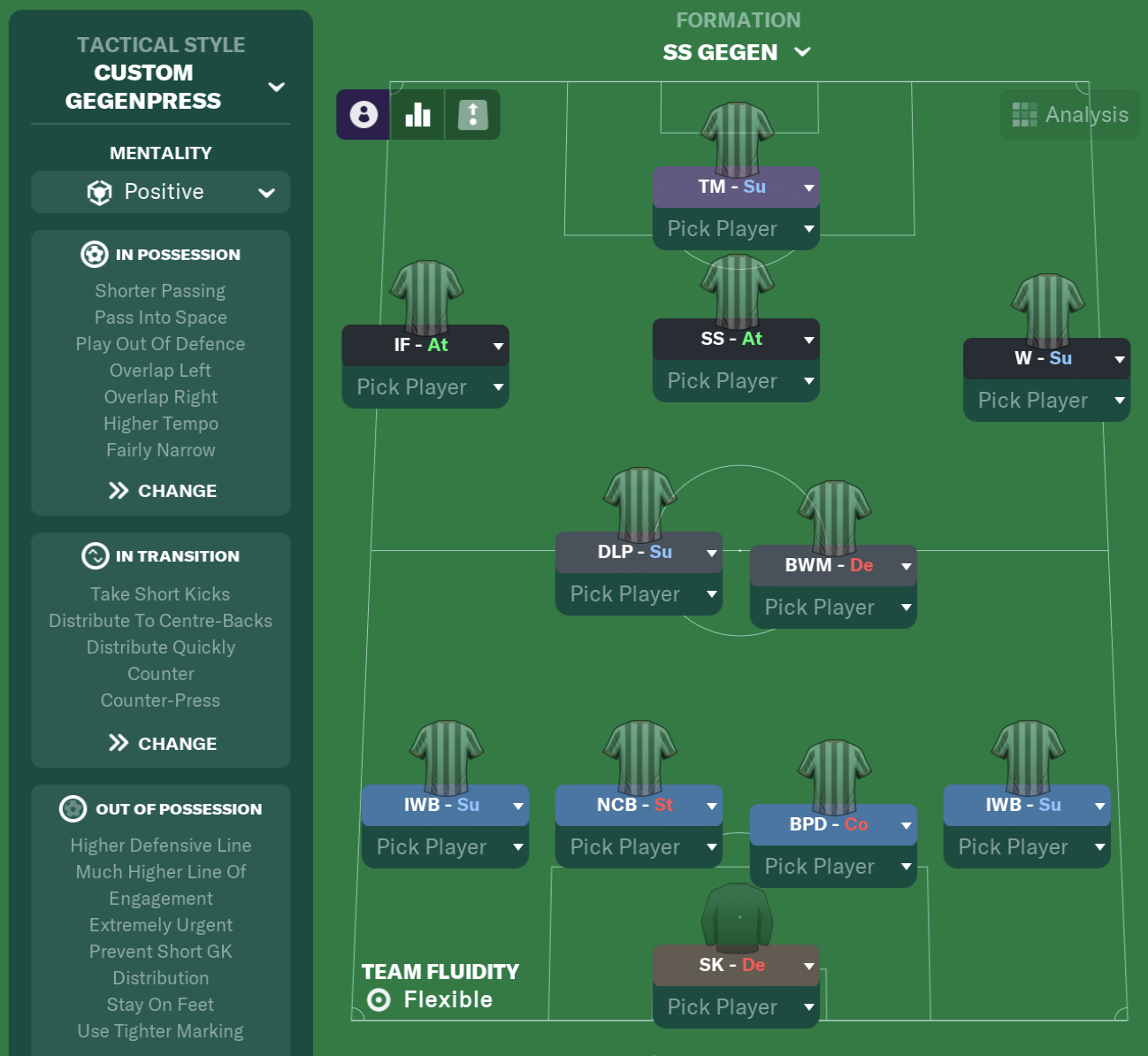 Defensive philosophy
The goalkeeper is set to sweeper keeper to mop up longer through balls exposed by a higher defensive line. The centre back pairing is key for stability at the back here. A quick and strong tackler playing at NCB with the 'Stopper' role is covered by Ball Playing Defender with 'Cover' on. This tactic differs from Bielsa's in that he seems to prefer overlapping runs from Ayling/Allioski and subsequently concedes every 5 minutes - the two Inverted Wing Backs attempts to fix this. By stepping in and occupying the area just in front of the CBs (that the mad dog stopper defender will be flying into also), we try to reserve more men for defence whilst allowing for fluidity.

Midfield philosophy
Opting not to go for a DM like Phillips (our lord and saviour - can you guess I'm Leeds fan yet?) to allow more men to commit to attacks leaves a bit of a hole. One of our CM's is therefore dedicated to being a Ball Winning Midfielder in 'Defend'. Think of him as a similar breed of player to the nutter of a stopper CB, just further up the field and hopefully able to know what to do with the ball once he wins it. What is that you ask? Give it to the Deep Lying Playmaker. The other CM pairing, his sole role is to float around in the midfield and spray passes to the 4 attackers ahead of him.

Attack philosophy
Emloying a disruptive yet pacy Target Man will always be my preferred player up front. Here, Bielsa often employs Bamford in more of a pressing forward role to close down the space. He's primary holding up the ball and disrupting the defensive line for the Shadow Strikers runs (who will likely end up being the main offensive threat) and the left wing set to Inside Forward on 'Attack'. Rounding out attack force is not another Inside Forward, as much as every part of me wanted to - but a winger, set to stay as wide as he can. His main goal is to whip in crosses for your lumbering Target Man or onrushing SS/IF, but also to stay wide dragging out the defence a little and hopefully creating a little more space.

Instructions - Out of Possession 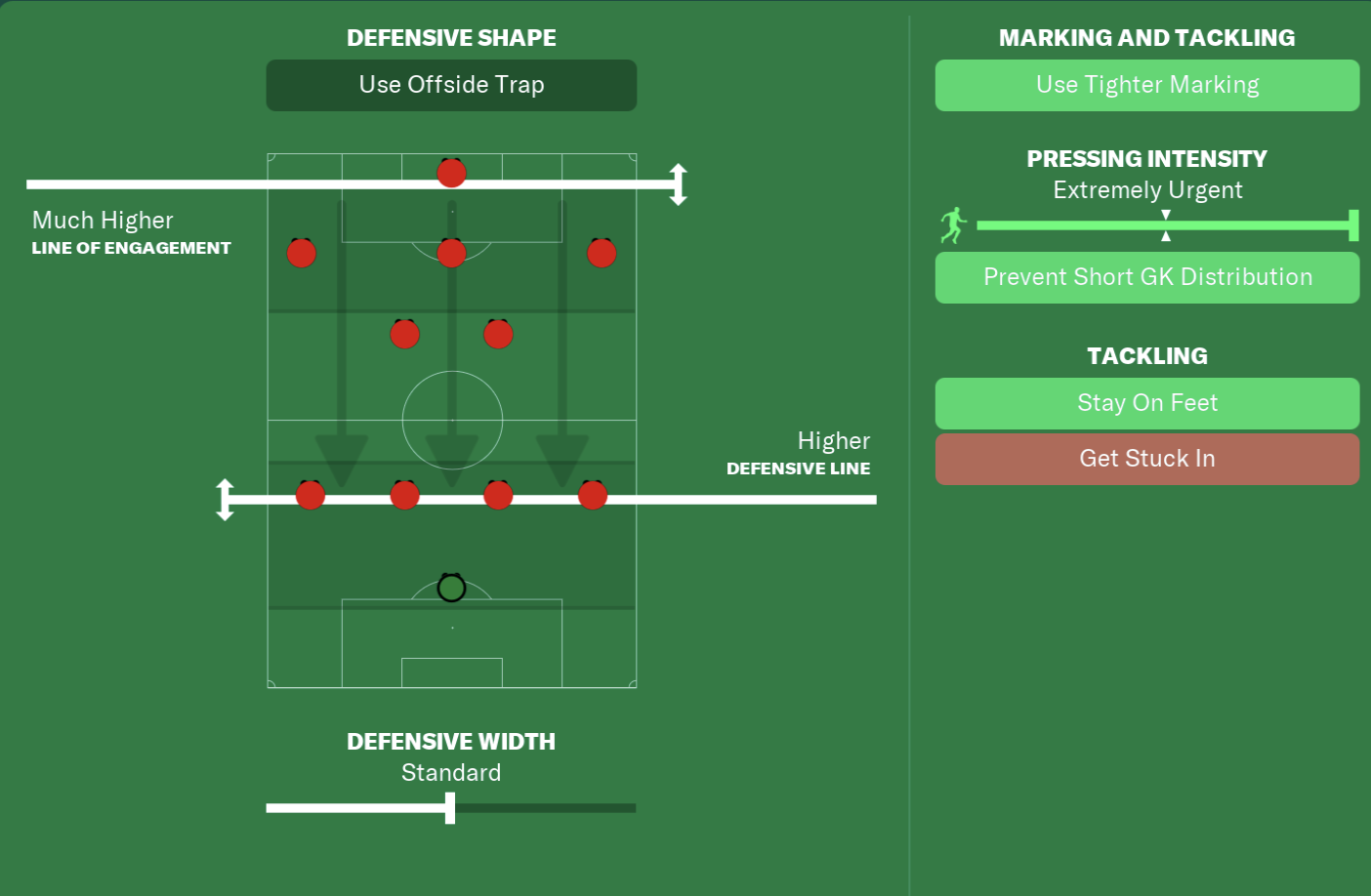 When out of possession, the name of the game is to get the ball back by any means possible. In the past I've kept tackling to 'Get Stuck In' and feel this makes a higher risk-reward type strategy. Get Stuck In means you're more likely to get the ball back and terrify the opposition into not wanting the ball back anymore (your Ball Winning Midfielder and NCB on 'Stopper' will love you forever) but you'll also more likely end up having them sent off and losing easy matches. Use it wisely if you tweak it ... Similar kinda theme here too; lost the ball? Get it back. Got the ball? ATTACK!! Goalkeeper has it? Get it out quickly to the CB's and attack!! Not a cultured tactic, but one that makes me smile. 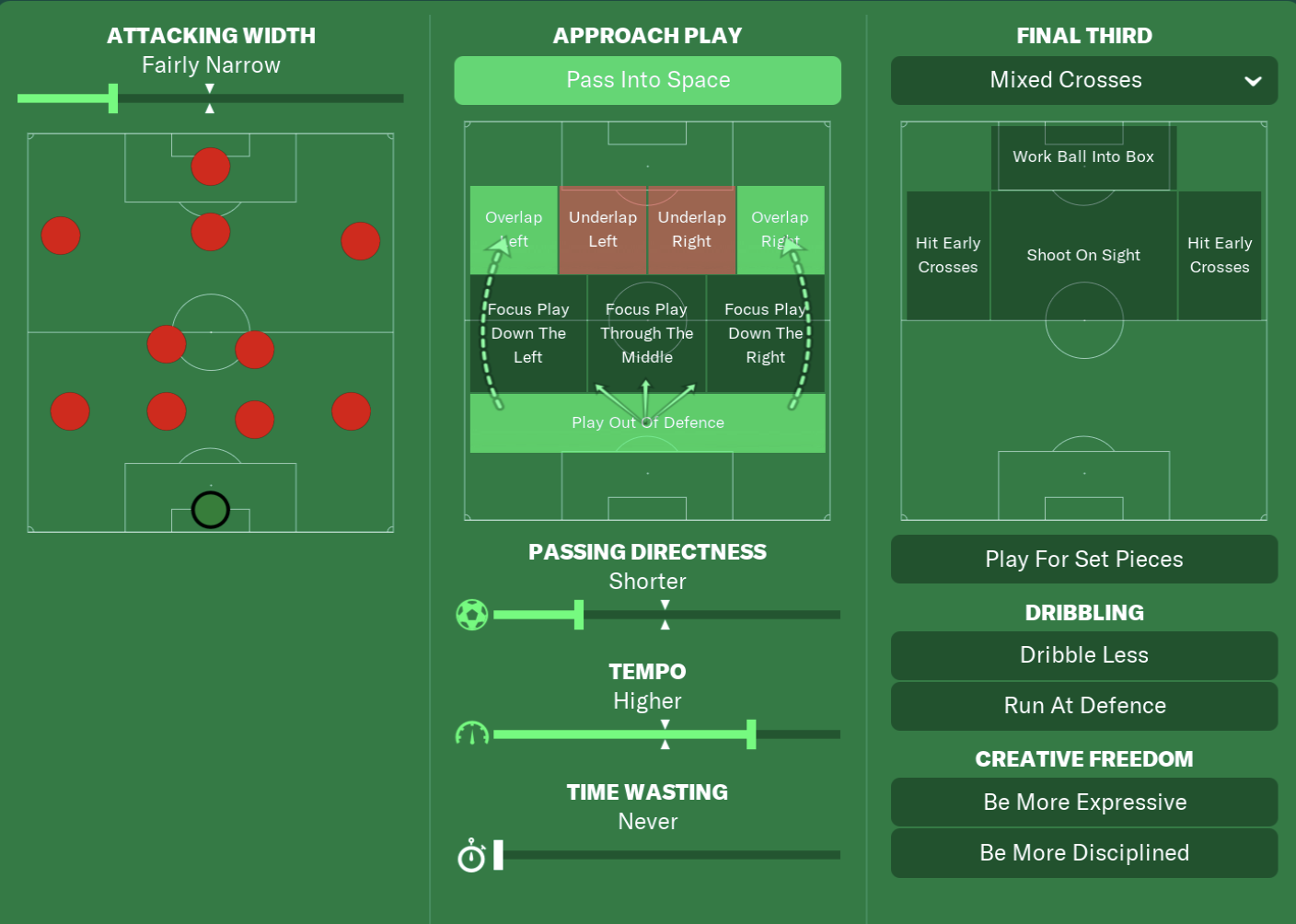 Very Bielsa. Once you've got the ball, keep it - lots of short passes, high tempo centre focussed play. I've decided to keep the overlap option true so that players may be encouraged to overlap, but it's not a corner stone of the tactic. Passing into space also allows for the DLP to come to the for, spitting balls through for the SS/IF/TM etc .... Importantly. Time wasting is not a thing as Bielsa commands. I don't care if you're 1-0 up at the end of the game after you've weather 50 shots and should be losing - you're still going to ATTTAAACCKK!!

Results
Little to show you all here just yet, I'm currently enjoying the FM Editors 10th level of the English football league database, and have only just started the season. But will update you as the season progresses. 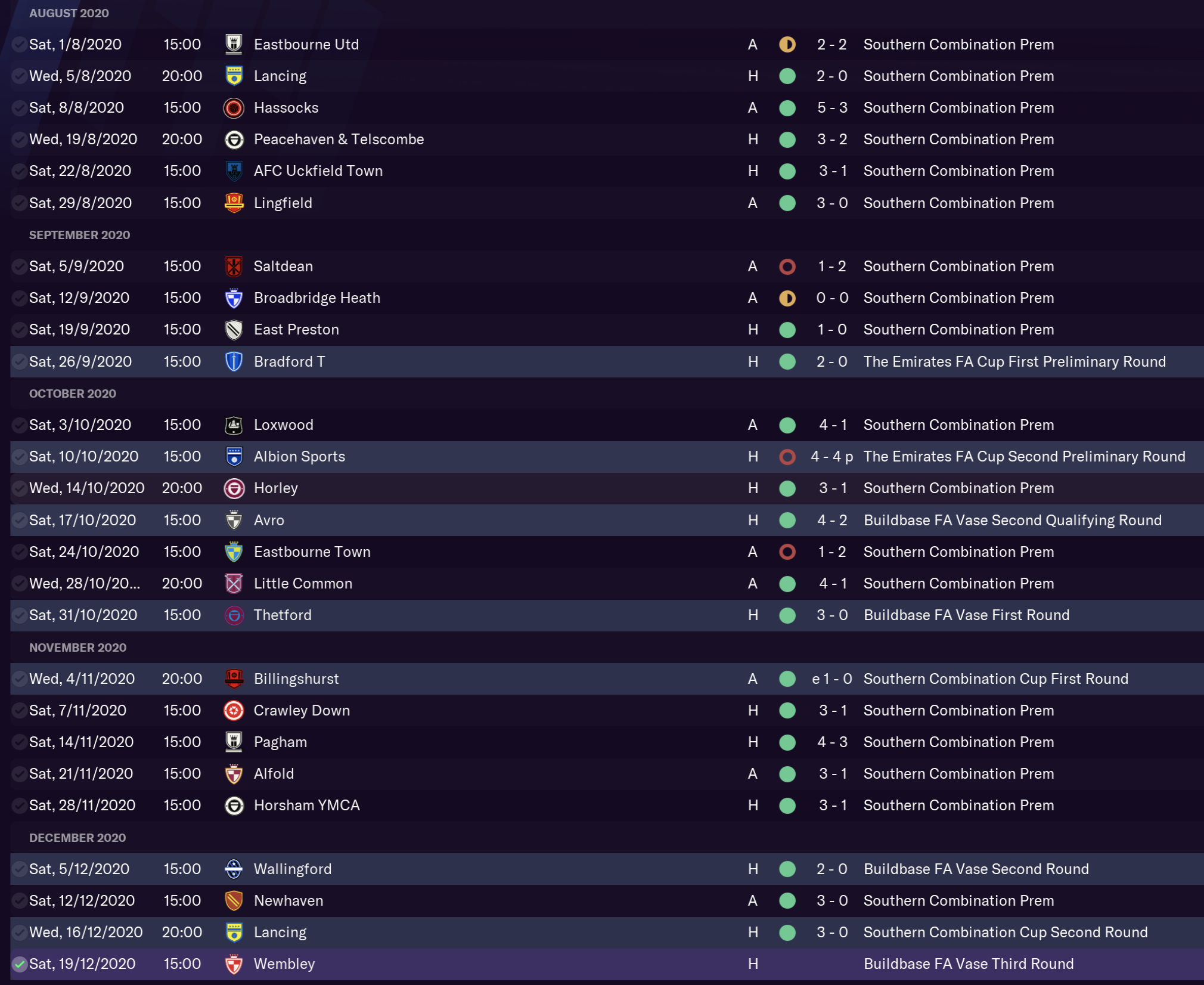 The early results would suggest I'm more than comfortable scoring goals (coming mainly from the IF and TM surprisingly) and assists heavily from either the Wing or DLP. The SS will shine more once I actually get a player that can play in that position. As I mentioned, this is lower-lower-LOWER league management, so the quality of players is next to nothing. I had no preseason to prep, and my highest paid player is on £5 p/w ... and that's only if I actually pick him. As I sort out the defence to being better than 'average for my youth squad' I'll update this too!

In the meantime, I'll stop making excuses and get back playing in the tenth division of English football ...

Let me know if you had any feedback on improving!