Download
Overview History Discussion
The broadest theme of the tactic was to allow my most talented, creative midfielders to create chances for my strikers. At the end of the 38-game league season, we'd created a healthy 300 chances. Nice la!

That's an average of 7.9 per league game. After playing around with the different roles in the last few weeks, what I enjoyed most was deploying my most creative central midfielders in the wide playmaker positions, either as a ML or MR.

In this case, I wanted to taker it further and play with two wide playmakers, but to do so in the AM (L) & (R) positions. If I could win the ball and feed them quickly, they'd have two pacy strikers to create for.

- No Opposition Instructions or Shouts

- Right footed player as AM (L)

- Left footed player as AM (R) 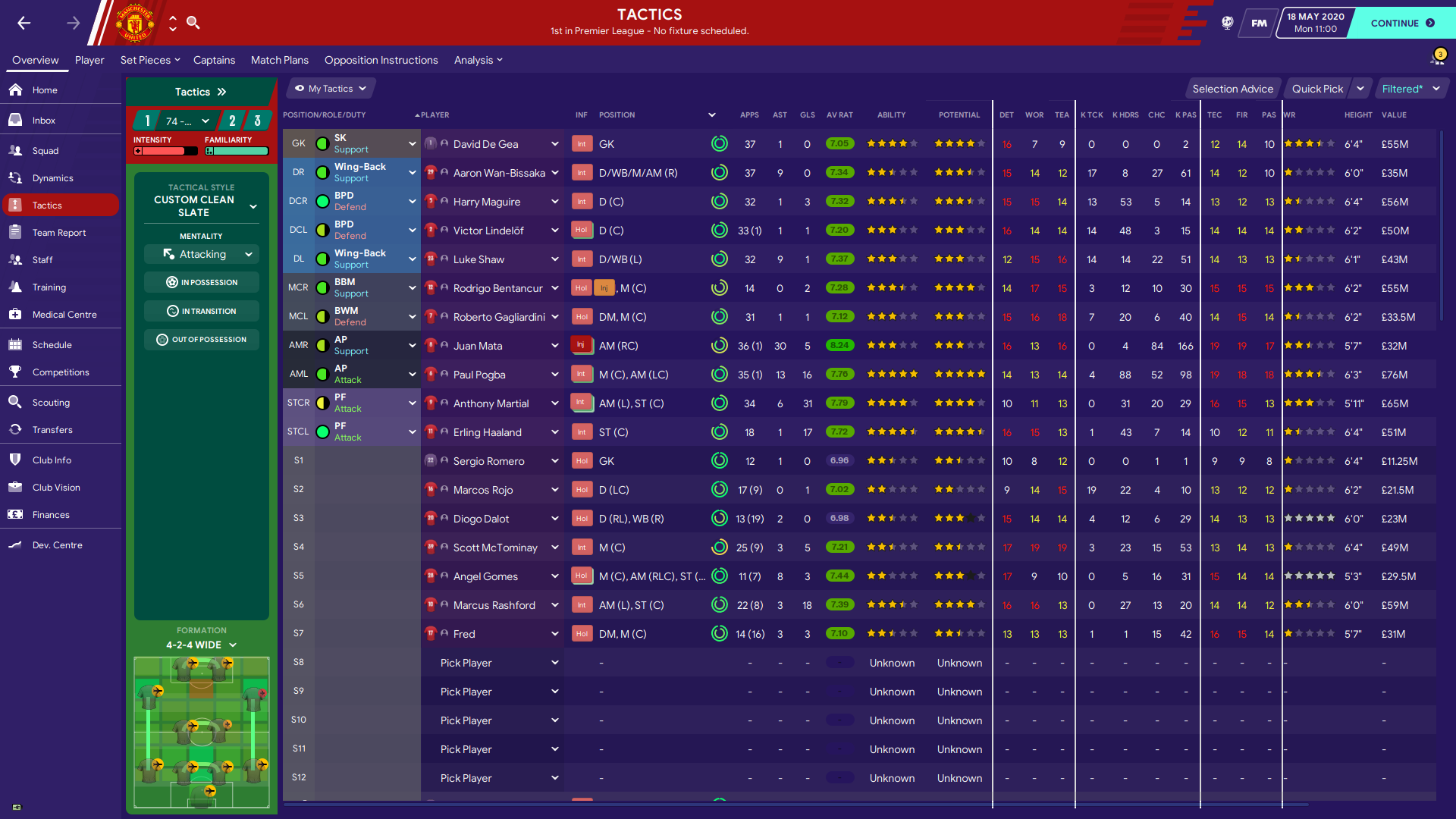 Paul Pogba's attributes are world class, but at the start of the game he has no experience playing as a AM (L).

A right footed player, I wanted him to come inside on his strongest foot and cause havoc. My only concern was that his decision rating starts at 12, especially with wide players being so wasteful in the current match engine.

Paul's performances were terrific from the first week of the season, only taking 5-6 months to become a natural performer in his new wide position. At the start of the season, I wanted a specialist Ball-Winning Midfielder and elected for Gagliardini for £15m. He was the only signing of the summer.

Haaland and Bentancur came in January to provide upgrades to Rashford and the great Scott McTominay.

Haaland was a great purchase for this style of play as he's a great Pressing Forward who works like a dog.

I also picked up Bentancur as he's a terrifically well-rounded Box-to-Box Midfielder. I played a youth team in all cup competitions and got knocked out of the Europa by Rennes. It was disappointing, but it was the kids that played. Juan Mata was nothing short of sensational.

Playing wide right as an Advanced Playmaker (S), he racked up; Better players than me will be able to improve this tactic.

For starters, the strikers get caught offside a lot. We also didn't score a lot from set pieces, disappointing with the likes of Harry Maguire attacking crosses. We won all 19 league games at home, but our away form was patchy. We played well in the big games, but lost 5 away and drew 4.

Our defenders also made a large number of individual mistakes. It's not entirely a negative because they make a great contribution, but the style of play exposes them. I made sure that we had a healthy number of friendlies to help get accustomed to the tactic. If you try to use instant results, players being retrained may not play where you want them to.