In my opinion, this is a very solid 433 that will concede little but still score plenty of goals. I have tested it with Napoli, Valencia, PSG and Spurs. Results below. As always, AM was in charge of team training and team selection. No editors were used. 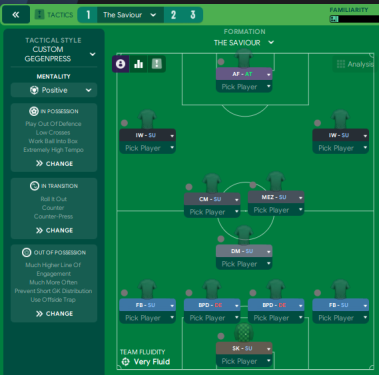 I have used the TIs that I know are very effective, SPs are similar to the ones TFF's Hot Tub posted about the other week. I've only gone with 1 attacking duty, however the PIs on the FBs, CM, Mez and IWs are those of an attacking duty in them roles. Effectively the FBs are IWB on attack duty but by using FBs with the IWB PIs, I just felt the tactic had a little more stability. I haven't added sit narrower on the FBs as I wanted them to stay wider to hopefully reduce the number of goals conceded via crosses

I messed up here with the screenshots as I forgot to get the squad screen and analyst report screenshots but as you can see Napoli won the league scoring the most and conceding the least. 94 points achieved and got to the final of the Europa league where we got beat off PSG. I believe Mertens scored 26 goals but I don't know in how many games.

PSG won 38 out of 38 games in the league, winning the treble overall after narrowly being beaten off Man Utd in the CL semi final. 134 goals scored with only 12 conceded in the league. Mbappe scoring 41 in 56. Messi had 55 goal involvements in 53 games.

Valencia won the league with 93 points, scoring 88 goals and conceding just 24 goals. Best in the league in both scoring and conceding. I believe Valencia are predicted 7th. Maxi Gomez top scoring with 37 in 36.

Spurs are predicted 5th but managed a top 4 finish and also won the Europa League but I think we all know that Spurs are the greatest on the game and often in saves find themselves in the bottom half of the table, sometimes even relegated. They don't have the biggest squad so to finish 4th on 80 points and win an European competition is a pretty good test in my opinion. Finished 3rd in scoring with 74 and 4th in conceding with 37. Less than a 1 game. Kane top scored with 63 goals in 58.

Fulham are predicted to win the league. 2nd best in scoring and best defence with JUST 24 GOALS conceded!!! Won the league with 114 points, 24 points ahead of 2nd placed Bournemouth. Mitrovic top scored with 30 in 32.