Download
Overview History Discussion
For my new save I was looking at a challenge in England and in the end I chose Shrewsbury Town in League One. Well, after taking over I noticed that I had no wingers and no full-backs, so I created a tactic based on this. I was thinking of going with a 5-3-2, but since I had too few centre backs in the end I opted for a 4-1-3-2 formation. I have since then improved and adjusted it a bit: 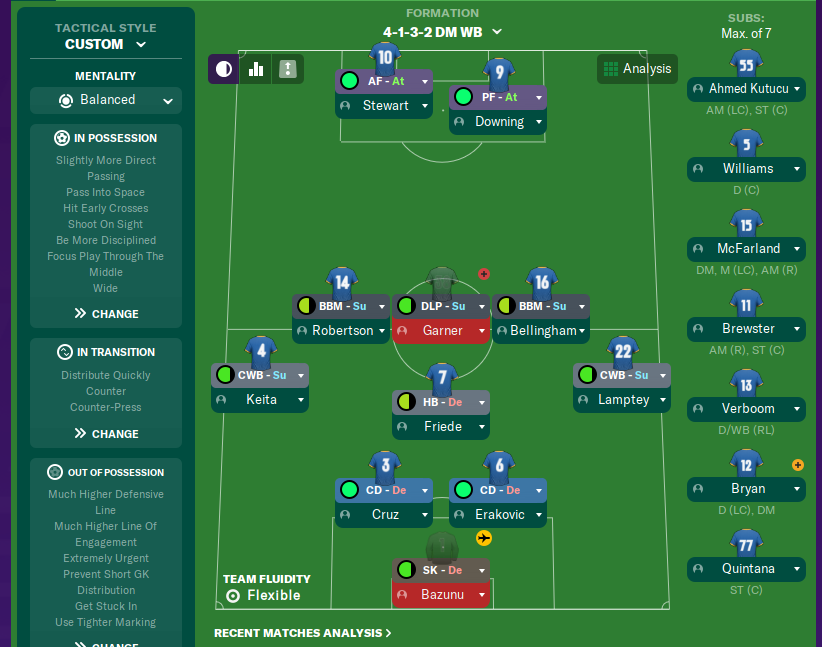 The basic idea is that the back two together with the half-back provide solidity at the back in defense. For the wing backs, I have had the best results when setting them to CWB - they run up and down the pitch, sometimes also cutting inside when the opportunity arises. For the midfield trio, this is the set-up that has given the best results for me - two BBM:s with "Get Further Forward" and "Shoot More Often" instructions, coupled with a DLP. For the forwards the roles can vary depending on the quality of your players, however I have seen better results with PF/a + AF/a than with other combinations, although this may also be due to the players available to me being best suited for these roles.

As for the team instructions, this tactic was born for a League One team - no fancy build-up plays, just get the ball forward, get into a good position, shoot, repeat. Having a wide attacking width is important for spacing purposes, otherwise everything is more or less self-explanatory. For the first 1,5 seasons I had a standard def line/LoE, however, after having a look at the most successful tactics here on FM Base I switched it to much higher and with a higher intensity, which has provided good results. For tougher away games or when protecting a lead, I sometimes pull back the defensive line to standard, however I keep the much higher LoE. A set-up like this will provide more counter-attacking opportunities, with your players being a little bit deeper and their defense a little bit higher, which allows long through-balls to be played.

The tactic has a lot of general instructions but only a few player specific ones, the half-back is instructed to play more direct passes and the BBM:s I already mentioned, otherwise however I do not have any instructions set.

The tactic was perfected during last season (2021/22), and considering I had a very low transfer budget and the lowest wage budget in the Championship (125k/w, 10x lower than the largest) the results were good (media prediction for 21/22 was around place 20).

So far this season the results are looking very good (media prediction - 15th): 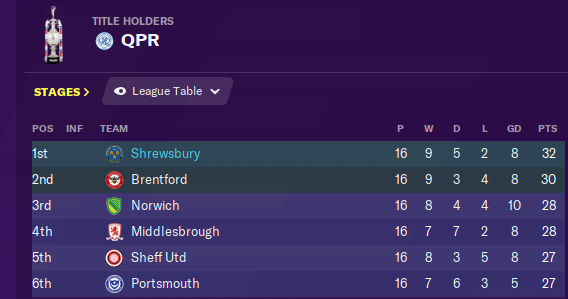 From a statistical point of view in the past 50 games we have out-scored our opponents 76-52 and most goals come from dangerous positions: 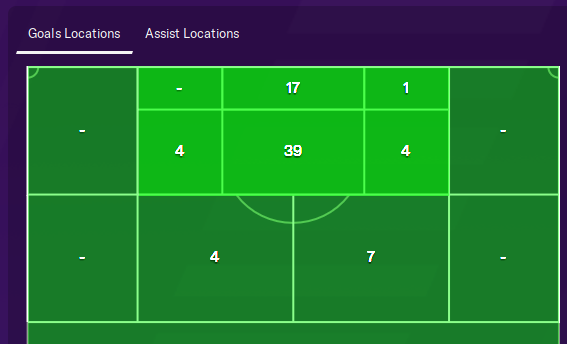 With regard to clear-cut chances, we are losing out a bit (102 for, 106 against last 50 games; 66 converted, 71 against - whatever this means, I had always thought this meant CCC:s scored, but it cannot be since I have only allowed 52 goals during the last 50 games), however we make that up by shooting a lot - in most games we have a lot more shots both on and off target. The most common assist type is cross (20 goals) with through balls second (13 goals).

Looking forward to having this tactic tested!