I started my first save in FM20 as Everton using a 4-2-3-1 tactic based on the player suitability. It's an attacking tactic that focuses on Richarlison (IF) and Iwobi (IW with Digne overlapping).

The wide players score occasionally but the issue is Mosie Kean... He's a sole Advanced Forward but just can't seem to score and rarely gets above 6.80 rating. He also spends most of the game 'furious' or 'frustrated'...

I've attached screenshots of the tactic and Kean's stats - I've had him training as an AF with focused Final Third training to improve composure etc. But I need to improve the team goal output... Kean doesn't score and my wide players cut inside but squander a lot of 1-on-1s. 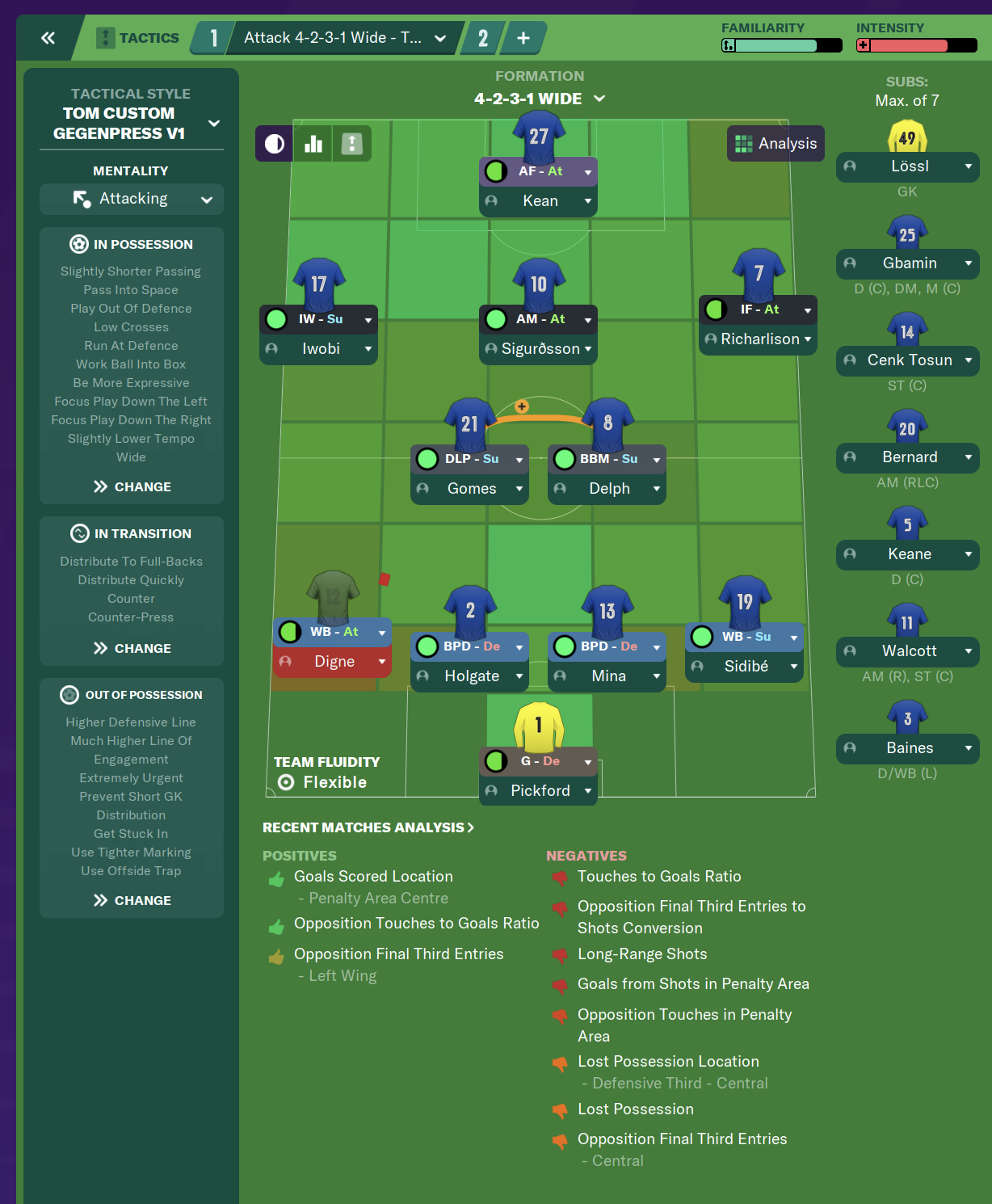 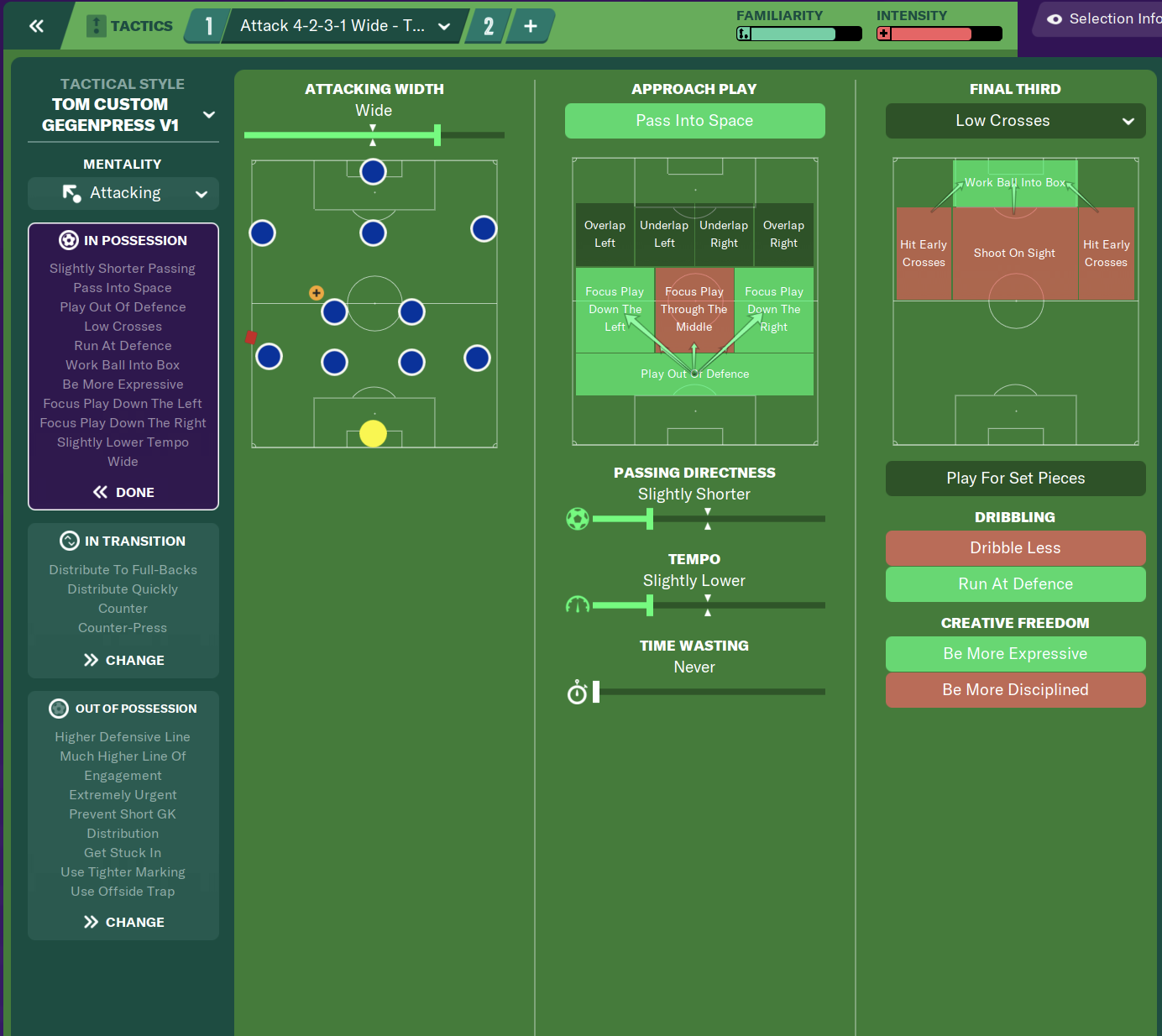 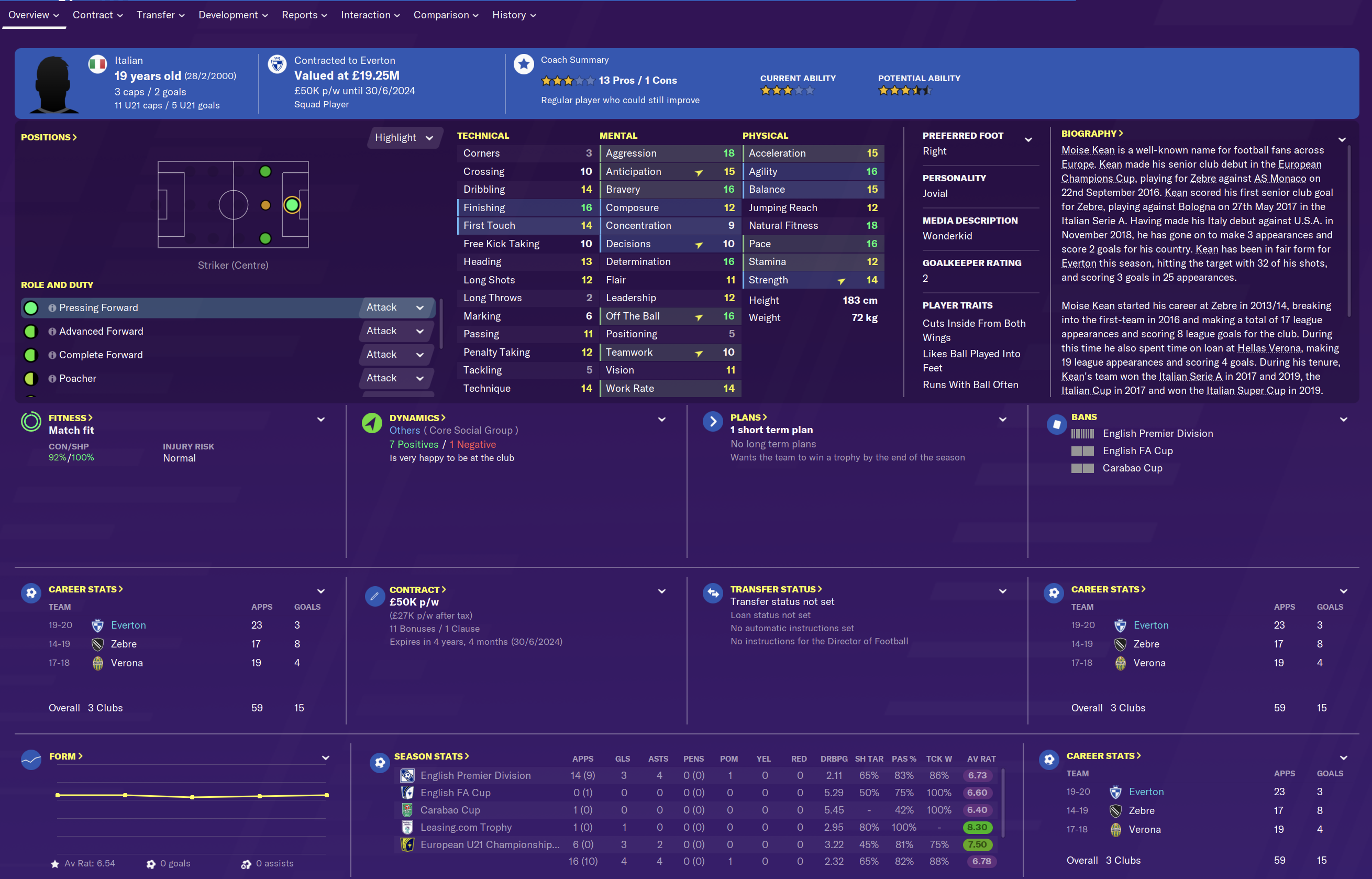 Maybe this is the other reason why Duncan Ferguson subbed him off early. Have you tried him with a different role like a Pressing Forward? I'm also assuming you've sold DCL.
K

Players squandering one-on-ones is a known issue with the ME this year and if there's a tactical solution to it I don't think anyone has found it. My theory is that they nerfed it to compensate for flaws with the defensive AI. My striker (a PF in a gegenpressing system that's usually 4-2-3-1) has 12 goals through most of the first half of a season, but I would guess half are from corners and penalties (which he's 1/3 on despite a 14 penalty rating because of course he is).

My first recommendation would be that you untick the "work ball into box" and "slightly shorter passing" team instructions. That doesn't really suit a gegenpressing tactic since the idea is to press, win the ball back, and then launch attacks in transition. It won't help your striker directly but you will build faster, more direct attacks that should lead to better chances. "Slightly lower tempo" is also inappropriate for a gegenpressing system for the same reason--high tempo attacking being the entire point. Those two issues are probably why you're getting bad ratios of touches to goals and final third entries to goals. "Wide" in possession might also be an issue but I would try changing the other instructions first and see if that helps before fiddling with that.

Also, did you add/change any of his player instructions? If so, could you post those as well? There could also be an issue with those. I don't see anything obvious in his traits that wouldn't fit his current role or your system so I doubt that's it.

My general advice is to keep it simple when you create tactics. Stick to the core instructions for the generic tactic for that style and watch your games closely to figure out what you need to adjust. I think it generally makes it easier to identify your problems rather than changing several things to start with and then having to go back and figure out which of those changes was the problem. The base tactics aren't perfect but they do at least usually include a sensible set of instructions that don't conflict with one another.
V

I must say it looking like solid tactic but try him as F9 or something like that mby deep lying forward like benzema so he can create for others and also score. MBY dlf support. But then try also lowering your defensive line not engagement line otherwise i must not agree with the post above i find it that max pressing is done with slow tempo like Barcelona did not with high tempo. Total pressing then retain the ball as most as u can until u find the opening. Also there is truth that u can play high tempo with heavy pressing but its completely different style from what you have set in the tactic from what i saw...Mby decide what style suits your team better. Fast paced high tempo or slow paced some shenanigans
J

I’d just echo what others have said, you’ve got conflicting instructions for your team you need to decide your style, ie you’ve got ‘pass shorter and pass into space ‘ , I always play with Everton and Kean usually scores about 20. I’ve gone 442 with Richy up top as well (Reaving v1 tweaked by RDF (TFF) ) . I’m trying a ‘Ancelotti ‘ style tactic at the moment so hopefully the results are good and if they are I’ll post back for you.
You must log in or register to reply here.
Share:
Facebook Twitter Reddit Pinterest Tumblr WhatsApp Email Link
Top