Arsenal Invincibles 2001-2004- Recreating one of the great footballing sides

The Arsenal side from 2001-2004 is known as one of the greatest sides in world football history. They are the only team to stay unbeaten in a full PL season (2003-4), but they were also the first team in modern history to be unbeaten away and score in every game (2001-2). Not bad? On top of that, they played brilliant, expansive, attacking football, but were also deadly on the counter. The short passing football but danger on the counter has never been created in football since, teams struggle to find that combination. But the pure ball playing ability of this side, even the supposed 'defenders' were good on the ball, allowed this combination to happen. As taken from zonal marking, this picture shows the basic formation and players Arsenal used. 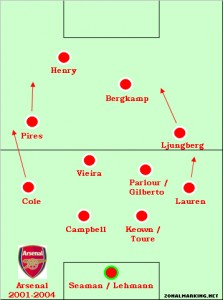 And the team instructions are; So, as you can see, it's quite a loose 4-4-1-1, which presses high, plays a high line and plays short passing football, but retains a counter attacking threat. However the player roles are what makes the tactic. At the time, the WBs were probably the first use of wing backs in modern day football, and the BPD was the first of it's kind too. Many teams relied on the full backs defensively and played a flat back 4, the BPD was rare as teams used to kick the strikers and boot it clear. The WM role was the exact opposite, it was the last high profile case of WM, before wingers, playmakers and inside forwards came to the forefront. The attacking midfielder is exactly the same, classic number 10s became replaced at the start of the decade by advanced playmakers (a modern playmaker) and Dennis Bergkamp was probably the last great number 10. Anyway, i'll stop boring you and cover the players needed for the role

GK- needs to be good in net (standard keeper roles), but also good at travelling out of his area to sweep up balls over the top, and needs to be able to launch counter attacks with through balls. Needs acceleration, and passing on top of the standard keeper stats. Think Lloris, Cech, ter Stegen etc
FBs- going to be up and down the pitch, and put in great crosses, a standard wing back with good stamina suits this role. Think Dani Alves etc
CB- any decent CB will do. Think Kompany, Chiellini etc
BPD- same as above, just needs good passing, and decisions. Think Hummels, Luiz etc
WMs- These are quite hard to find, and this role is VERY deceiving. WMs are so rare to find nowadays (James Milner is quite a good example of one) as they are rarely played, but an inside forward with good work rate, and some of the other WM stats (as well as decent strength and passing) retrained to the left and right midfield position would perform the role to the same ability as Pires and Llunjberg. These will get lots of assists AND goals, so finishing is paramount. They will cut inside, so a right footer in the left position and left in the right is needed. Think Bale, Schrulle, Oxlade Chamberlain etc
BBM- The Viera of the team, will need 2 hearts! Great stamina is important, as well as the standard BBM stats as they will bomb up and down the pitch. Think Yaya Toure, Ramires, Fellaini etc
CM- This guy will sit deep and pass the ball to a more creative player, crucial in defending. A normal CM with a duty of defend will be good. Also, the PPMs 'runs with ball often' and 'runs with ball through centre' should be unlearned. 'Plays short simple passes' and 'stays back all the time' should be learned. Think Sandro, Barry etc
AM- this guy is again very rare, but will act as a second striker, albeit slightly deeper, and will require great technical skills. Look at the normal AM stats and use them. A player for this position shouldn't be a modern playmaker (Silva, Oscar, Iniesta etc) it needs to be a guy with pace, and good technical skills. Michu is an example i'd say, but many technical strikers (Jovetic, Aguero, Tevez) can be retrained. Wilshere and Muller are 2 players who are natural in the CAM role, and can be trained to play as an AM.
AF- I'm not goingt to lie, Thierry Henry is one of the best strikers ever, and was probably the world's best player at the time. This striker needs to be very good technically, with bags of pace and great finishing. They are gonna be the focal point of the attack, so this position needs to be filled by a brilliant player. Think Aguero, Jovetic, Lewandowski, Suarez etc

I played this with Arsenal for 10 games and won 9 and drew away to United, scoring 28 and conceding 6. I suffered the crash dump error so I can't test that save anymore:S. Anyway, I think I've covered everything, enjoy and feel free to ask any questions, and enjoy the tactic

He's too direct to be a trequartista imo. I definitely think he's a number 10
F

ellismcfc said:
He's too direct to be a trequartista imo. I definitely think he's a number 10
Click to expand...

no offense but berkamp is the epitome of trequartista so if its a recreate tactic why isn't it being used?
T

Fanty111 said:
no offense but berkamp is the epitome of trequartista so if its a recreate tactic why isn't it being used?
Click to expand...

Because he played both as a Trequartista starting from the FC position AND in a more direct role when used in the AMC position. Remember that the role on the pitch is their defensive position when not in possession. A TQ used in the AMC position would basiclly come too deep to emulate Bergkamps role in most matches. I would not say he playd in a AMC/attack role though as thats more like a False 10
B

no offense but berkamp is the epitome of trequartista so if its a recreate tactic why isn't it being used?
Click to expand...

I personally think he starts too high up the pitch to be a trequartista, and being an AM-A he is allowed to run from deep a bit more, slightly like Rooney's role for United, becoming another striker.

Crash dump is fair annoying but I iLife the look of the tactic
Click to expand...

No specific ones, leave it to the assistant manager. I'd use 'show onto weaker foot' and 'press more' if you want to do them yourself, but they aren't crucial to the tactic
S

I honestly think the following tactic could pass for what you are looking for in every which way.

Infact the instructions are very similar.

ShaunWolf90 said:
I honestly think the following tactic could pass for what you are looking for in every which way.

Infact the instructions are very similar.

Only really because both styles are so similar. The Arsenal way is (not so much now) based on high pressing, and short passing, playing at a high tempo. The shape is quite similar also.
E

Anyone tried this tactic?
W

the download link for this tactic is dead mate , try fix it then i could give it a shot
E

It's fine for me, what's it saying?
E

You tried it again? Here's a new download link;