Linfield F.C. today announced one of the biggest schock transfers ever. Former Argentina international striker Gabriel Batistuta has took charge at the Northern Ireland club. Batistuta nicknamed Batigol, has been out of football since leaving Al-Arabi in 2005 and has been concentrating on a construction company in his native country.

The prolific Argentine striker played most of his club football at Fiorentina in Italy, and he is the ninth top scorer of all time in the Italian Serie A league, with 184 goals in 318 matches. On the international level, he is Argentina's all-time leading goal scorer, with 56 goals in 78 national team matches, and he represented his country at three World Cups. In 2004, he was named in the FIFA 100 list of the "125 Greatest Living Footballers". He made 414 career appearances and scored 246 goals, he also played 78 times for Argentina scoring 56.

Linfield F.C. (full name Linfield Football & Athletic Club), is a semi-professional, Northern Irish football club, whose home ground is Windsor Park in Belfast, which is also the home of the Northern Ireland international team. Linfield play in the IFA Premiership (still popularly referred to as the Irish League) the second-oldest national league in the world after the Football League in England.
Linfield have won the League title a record 49 times, were the first champions of the League in the 1890–1891 season and are one of four clubs, the others being Glentoran, Cliftonville and Lisburn Distillery, who have retained membership of the League since its formation in 1890. Linfield's main rivals are Glentoran who play at the Oval in East Belfast. 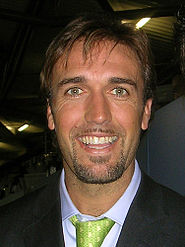 All smiles as Batigol signs a 2 year contract​
Batistuta's sources told Linfield's official website, "Gabriel is happy the chairman has trusted him with this role to become team manager, He is excited to get back into the game and is looking forward to trying his hand at the coaching side. He is looking for a 5 year plan to change the club to a full strength fully professional team."
You must log in or register to reply here.
Share:
Facebook Twitter Reddit Pinterest Tumblr WhatsApp Email Link
Top