Bringing Back the Biff

Former player and actor, Vinnie Jones, has today announced that he will be venturing into football​
management. The announcement has cause quite a stir in the world of football and there are rumours that many clubs are on the lookout for the ex-Wales international to bring his tough brand of football to their dressing room. Later on in the interview, Jones went on to mention that he was officially "Bringing Back the Biff" to the football world and anyone who comes up against his team/s should wear double shinguards and a headgear just to be safe. More news to follow...​
C

​
Dutch club Vitesse have today unveiled Vinnie Jones as their new man to take over from Fred Rutten. The club announced it was a one year deal worth $7,750 p/w with the chance to extend the deal if Jones succeeds. Jones told the media he was very happy to have signed with the club and was looking to win the club their first Eredivisie league title in their history. He then went on to say that changes would be made and the club would become a major threat in Europe under his tough style of management.​
​

​
Vinnie Jones today completed his first signing as a manager picking up South African midfielder Andile Jali from Orlando Pirates. The deal reportedly set Vitesse back $2.3mil but Jones assures that Jali will pay off his transfer fee within the first year of his 5 year contract.

In other news, Vitesse have been drawn against Icelandic team, FH, in the Euro Cup 2nd Qualifying Round. Jones stated that he was expecting a win and to play the first leg at home in front of the Arnhem fans was a great way to get his managerial career under way.
​
S

JULY/AUGUST 2012
​
A nice start to the season for Vitesse with 4 straight wins in the Euro Cup and 2 wins and 1 loss in the league before an unlucky loss in Zagreb started a 3 match losing streak and elimination from the Euro cup for Vitas.

Vinnie Jones has insisted being knocked out of the Euro cup will not deter his squad from a top 2 finish in the league and his transfers of Andile Jali, Gabriel Silva and Carlos Fierro on loan, to name a few, will provide the lift the squad is looking for.

An up and down 2 months for Vitesse with only 1 loss at the hand of league leaders Ajax. A strong finish to October with away wins over contenders PSV and Feyenoord sees Vitesse slowly start to climb the ladder in search of the top 2 finish Vinnie Jones is seeking.

Also, a win over non-league side DOTO sees Vitesse advance to the third round of the Dutch Cup where they will jace Jupiler League side Excelsior. 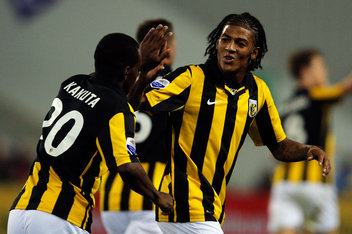 ​
A good 2 months for Vitesse sees the Vitas move into 2nd place on the Eredivisie ladder. Despite a 4-0 victory over VVV, Jones has stated his displeasure at losing against bottom placed Zwolle who were yet to win a game. Jones still remains content of his teams top 2 ambitions despite the slip up and has high hopes for winning the Dutch Cup.

In the third round of the cup Vitesse were able to muster a 2-0 win against Jupiler league side Excelsior despite the visitors best efforts. A round 4 match against FC Utrecht gave Vinnie's boys a chance of redemption after they had lost 3-1 in the league fixture a few weeks earlier. Revenge was the main course for Vitesse and they were able to reverse the previous score to move on with a 3-1 win. Roda JC await Vitesse in the Quarter Finals and Jones says he is confident his team will come up with goods. 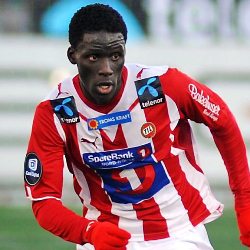 ​
Vitesse have finalised the signings of Kara (9mil) and Romario (1.8mil) today. In a press conference earlier today, Vitesse manager Vinnie Jones stated that these signings were to bolster the already strong back line and to increase the toughness in the squad that would be required to take the next leap. Currently on African Nations duty with Senegal, Kara will join up with his new side at the conclusion of the event while Romario joins straight away after helping his previous club, Vitoria, to promotion to Brazil's top level. Both players are said to be happy to join the club and the Vitas faithful can't wait to see them in action.
​

​
Another fairly good 2 months for Vitesse as they keep a slim hold to the second place in the Eredivisie. With Bony, Jali and Kara all out on African Nations duty, Carlos Fierro stood in at Striker and performed admirably earning himself a lot of interest from Vinnie Jones who is keen to turn the loanee into a full time Vitesse player. With Ajax's lead slowly building to 12 points on top of the ladder, the main objective for Jones and his players becomes securing that second place and playing in the Champions League next season. With PSV and FC Utrecht chasing down the Vitas it will surely be an entertaining final few months of the season.

In the Dutch Cup, Vitesse again came up with the spoils thanks to a 93rd minute goal from Fierro. The strike earned Vitesse a place in the Semi's against strong opponents in Feyenoord. With Zwolle beating Ajax and NAC Breda defeating PSV in the quarters, the matchup between Vitesse and Feyenoord becomes a potential final with the winner being the clear favourite to take it all. Vinnie Jones is confident his boys can get the win despite having to play the game away from home.

​
A nerve racking end to the season saw Vitesse triumph on the final day, away from home against Roda JC. Needing a win to guarantee second place and a Champions League spot, Vinnie Jones' men came ready to play and in a game where not much defence was played, it was the Vitas coming out triumphant. A hat-trick to on loan star Carlos Fierro was the difference between the 2 sides. Fierro came into the side replacing Wilfried Bony who suffered a season ending calf injury in the game at Utrecht and he showed his class in giving Vitesse a ticket to the Champions League. Jones was ecstatic after the win claiming the team were brilliant, despite conceding 3 goals. Nonetheless, Jones was happy to have achieved his top 2 finish for the season and there will be plenty of work to do in the off-season to transform Vitesse into Eredivisie and Champions League Winners.​

Vitesse v FC Zwolle
De Kuip, Rotterdam
​
A thrilling semi-final between Feyenoord and Vitesse came to an end with the visitors going home happy. 8 goals in total in a real offensive dominated game where Vitesse jumped to a 3-0 lead at half time and never really looked back. With Ajax already locking up the Eredivisie, Vitesse will be keen to go on and claim their first ever Dutch cup and more importantly, their first bit of silverware since winning the Jupiler league in 1989. Jones has confidence in his boys and claims beating Feyenoord away when the final is in Rotterdam is a huge boost for confidence and should be an advantage against FC Zwolle.


View attachment 355255View attachment 355256View attachment 355279​
In what was a so called one sided match, the final score showed that this game was the complete opposite. 2nd on the ladder faced 2nd last on the ladder in neutral ground (De Kuip, Rotterdam. Feyenoord's home ground). Neither team had previously won the cup, Vitesse had played in 3 grand finals and Zwolle 2. Vitesse had been hit with big injuries in previous weeks, losing Wilfried Bony for 5 months, Marco van Ginkel for 2 months and captain Guram Kashia for 2 months. Despite these key losses it was the Vitas who would come out victorious. Vitesse had 20 shots in the game but were only able to get 5 of them on target. The Zwolle defence ensured every Vitesse shot was contested and were nearly always up for the challenge. Zwolle were only able to get 3 shots off in the entire game and only 1 was on target, this was a compliment to the Vitesse defence who were also up to the challenge and made this a very gritty battle. In the end it was substitute, Gael Kakuta, on loan from Chelsea, who sealed the Cup for Vitesse with a strike late on that went in thanks to a bit of help from the post. The Vitas defence were able to hold out for the remainder of the game and ensure a memorable first Dutch Cup victory. Vinnie Jones credited his defence in the press conference after the game saying, "The boys acted like true gladiators today, they defended their goal as if it were programmed in their blood!" Vitesse have qualified for next seasons Champions league so their Europa spot will go to the team in 5th.
​

This week on Eredivisie TV: The Rise of Vinnie Jones
​

27/7
Ajax - 2 (Eriksen x2)
Vitesse - 0
​
A poor performance from Vitesse against Ajax in a game where the league champs looked the better side the full 90 mintues.
​
Eredivisie Results


View attachment 355387View attachment 355389
​
A fairly slow start to the season for Vitesse playing out 3 draws, 2 of which were scoreless. With injuries to key players like Kara, Romario, new signing Wellington and numerous others, it makes things tough on Vinnie Jones when selecting his squad. Still, an unbeaten start to the season, a win over Feyenoord and players slowly starting to recover from injuries gives Vitesse a chance to start a title run early in the season.
​
Transfers
​
Vinnie Jones was given a very small transfer budget due to financial problems and therefore had to let a lot of players move on from the club on free transfers. The key signings were also on frees with Bruno Martins Indi and Kelvin Leerdam joining from Feyenoord. Jones also managed to pick up Brazilian midfielder, Wellington, on a 4.4mill deal payed over 48 months. The club also picked up young Portuguese regen striker, Filipe Lima, from Naval on a free. Jones has great faith in young Lima and hopes he can play a similar role to the one Carlos Fierro played last season.​
View attachment 355392
​
Champions league review coming soon...

1. Chelsea
2. Dortmund
3. Athletic Bilbao
4. Vitesse
View attachment 355412
​
An excellent beginning to Champions League life for Vitesse and Vinnie Jones as they beat both Panathinaikos and Inter Milan away from home on their way to the group stages. An excellent performance in both ties against Inter will surely give Vitesse the confidence it needs as it heads into a very tricky group including parent club Chelsea, Borussia Dortmund and Athletic Bilbao.​
You must log in or register to reply here.
Share:
Facebook Twitter Reddit Pinterest Tumblr WhatsApp Email Link