Can Phil Brown save Preston?

The 2010/11 season has been a disastrous one for Preston - they have rapidly gone from perennial play off contenders under Billy Davies, Paul Simpson and Alan Irvine to being rock bottom of the Championship with Darren Ferguson at the helm. A 3-1 home defeat against Middlesbrough in late December finally saw the end of Ferguson's horror tenure as Preston manager, with the Scotsman losing 25 of his 49 games at just 1.02 points a game. 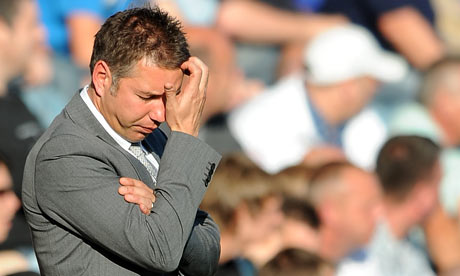 Ferguson lasted less than a year as Preston boss.​
Owner Trevor Hemmings and chairman Maurice Lindsay then set about finding a replacement capable of keeping Preston in the Championship and progressing beyond. Whilst unrealistic names like Sam Allardyce, Chris Hughton and even a return for former boss Davies were linked, former Hull City boss Phil Brown landed the job, signing an 18 month contract with the club, bringing former assistant Brian Horton to the club with him, but retaining key staff such as David Unsworth and Jamie Hoyland. Brown, 51, was at the heart of Hull's recent success, steering the club away from relegation from the Championship, masterminding their ascent into the Premier League for the first time in the club's history, then achieving the unthinkable and keeping the Tigers up on the last day, sparking scenes of jubilation at the KC Stadium.

Karaoke King Brown has been given the unenviable task of saving Preston​
With Preston rooted firmly to the bottom of the table and 6 points from safety, Brown's first game against big spending Leicester is bound to be a difficult one, requiring a target of 53 points for survival. Brown has already set about stopping the rot by signing Blackburn midfielder Amine Linganzi and Watford striker Nathan Ellington on loan deals until the end of the season, but the loss of top scorer Jon Parkin to Championship rivals Cardiff will be a huge blow to his chances of keeping the Lilywhites in the division.


Note: The format of this is that I have started the game in January 2011, having used FMRTE to edit the league table, whilst downloading the real fixtures from the Championship season. This will obviously be played beyond the end of the season. I saw a similar idea from someone playing as Kenny Dalglish, hope they don't mind this being done.
D

I asked about doing this exact same challenge (start with Preston in Jan 2011 with exact same league table as real life) in the editing thread but was told it wasn't possible! So do I just need the real fixtures and the Real Time Editor to do it?
O

Darrylpne said:
I asked about doing this exact same challenge (start with Preston in Jan 2011 with exact same league table as real life) in the editing thread but was told it wasn't possible! So do I just need the real fixtures and the Real Time Editor to do it?
Click to expand...

Download the real fixtures
Download Real Time Editor and edit the table with points etc.
Start the game as Norway 2011

Ok thanks pal, should be a good challenge.
O

Brown's first game saw a superb 3-2 victory over Sven-Goran Eriksson's ambitious Leicester side. New loan signing Nathan Ellington enjoyed a spectacular debut, scoring a wonderful individual strike to open the scoring, then pouncing on a loose Aleksandar Tunchev pass to slot home an equaliser. There was late drama as Iain Hume's free kick was headed home at the far post by Sean St. Ledger to send Deepdale into raptures.

The next game was a difficult away trip to Middlesbrough, but new signing Caleb Folan made an remarkable impact on the game, scoring the opener after beating 3 Boro defenders, then Nathan Ellington hammered home a second to send the Lilywhites into a 2-0 lead before the break. Willo Flood did score a great effort from the edge of the box, but Folan was again on hand to pounce on a loose ball from 6 yards out to make it 2 wins from 2 for Brown.

In a game widely recognised by both sets of fans as the most important game of the season, Phil Brown came out victorious after a late, late strike by Nathan Ellington gave Preston 9 points from 9, making up for his earlier penalty miss. Scunthorpe rarely threatened and Ian Baraclough must be thoroughly regretting making derogatory comments towards Phil Brown before the game, as Preston went into their FA Cup tie against Manchester United high on confidence.

Regardless of their recent good form, Brown could never have expected a win at giants Manchester United away in the FA Cup 4th Round. However, striker Paul Hayes gave Preston a shock early lead by lobbing Tomas Kuszczak from the edge of the box. Immediately afterwards however, Luis Antonio Valencia equalised from a Gabriel Obertan cross. Obertan then made it 2-1 to United and it looked like United would go on to comprehensively defeat North End. But just before the break, Adam Barton found Keith Treacy inside the box, and the left winger hammered the ball into the top corner to make it level. And just after the break, Hayes scored his second to send the travelling Preston fans into delirium. The final 40 minutes were nail biting as Brown threw on centre half Wayne Brown for Hayes to try and hold out for the win, which they succeeded with to complete the biggest cup shock of the round. In the draw, Preston were handed a tie against West Brom or Derby at home.

Brown's first move was to go back to his former club to sign striker Caleb Folan for a knockdown price, with the two patching up their differences following a well publicised spat at Hull City. Brown also tied up the signings of wingers Graham Carey and Donal McDermott, whilst left backs Jonathan Grounds and Matt Hill joined on loan. Lewis McGugan signed for a nominal fee after a bust up with manager Billy Davies, and David Moyes lent his old club his Portuguese striker Joao Silva until the end of the season. Chris Brown, Wayne Henderson, Neal Trotman and Callum Davidson were sold to raise funds as their contracts were up at the end of the season, whilst Barry Nicholson's contract was terminated.
D