Ex-gameshow host Michael Barrymore's entrance into the Big Brother house was seen by an average of 6.5 million people, according to overnight ratings.

The launch of Celebrity Big Brother series was seen by one in four UK TV viewers. Last year's series opener was seen by 5.2 million people.

Ratings peaked at 7.6 million viewers - 31.2% of the audience - towards the end of the live broadcast.

Barrymore is the favourite to win the series, at 3/1 with Ladbrokes.

A Channel 4 spokesman said: "We are delighted that last night's launch show has proved such a rating success and a fantastic start to 2006."

Before his entrance last night, Ladbrokes said it had not received a single bet on Barrymore, whose inclusion in the show has caused controversy.

But the presenter - whose TV career has been in ruins since a man was found dead in his swimming pool in 2001 - was given a warm reception by the audience outside the programme's camera-filled house at Borehamwood, Hertfordshire.

Ladbrokes spokesman David Williams said: "We feared he might be damaged goods but the phones started ringing as soon as the show was over.

"The punters have started to make their move for the troubled funnyman."

Barrymore is one of 10 public figures - and one unknown contestant planted by Channel 4 producers - who will spend 23 days in a house with their every move followed by TV cameras.

Other contestants include singer Samuel Preston, of rock band The Ordinary Boys, and rapper Maggot from hip-hop act Goldie Lookin' Chain. Both are rated 4/1 to win.

George Galloway, the first MP to take part in the show, follows at 10/1.

The Respect party leader, who represents the east London constituency of Bethnal Green and Bow, has been criticised for his decision to appear in the programme.


George Galloway is the first MP to enter the surveillance gameshow
Actress Helen Mirren, who campaigned for his Labour rival Oona King in the 2005 general election, told Radio Five Live: "I think that's very weird. Where does this guy's ambition go, that's very peculiar. Personally, I feel his interest is a self-interest."

Other contestants include Faria Alam, who had an affair with England coach Sven-Goran Eriksson, US basketball star Dennis Rodman and model Jodie Marsh.

Actress Rula Lenska, ex-Baywatch star Traci Bingham and 1980s pop star Pete Burns also feature, along with an unknown contestant, Chantelle, who must convince the others she is famous.

Big Brother's ratings success will come under pressure on Friday when it goes head-to-head with ITV1's Soapstar Superstar, a talent show featuring stars from the likes of Coronation Street and Emmerdale in an X Factor-style contest.
Click to expand...

Pictures of them entering the house. 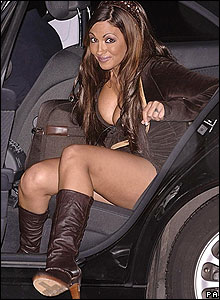 To be honest, i don't know half of them from looks, Michael barrymore, Jodie marsh and George Galloway were the only ones i knew from seeing them.

You never knew who Dennis Rodman was?
D

Maggot to win!!! The cross dresser guy/thing is just really annoying and I hope he gets voted out ASAP
S

You didn't recognize Rodman? Out of them all he has probably been the most famous by a loooong way.
R

Not in England. I knew the name but not he face, he looks silly to be honest.
B

yeah I know them all, but I really don't know how some of them can call themselves celebrities, I mean Faria Alam, how does sleeping with Sven and the guy at the FA make her a celeb. :/
M

the only celebrity is marsh...

US basketball star Dennis Rodman, known for his cross-dressing, joined the housemates... hahah

He was married to Carmen Electra, but filed for an annulment after just nine days

he really is a reatard

i never knew densi rodman as wel, the name does ring a bell
K

I watched it the first night but didnt bother with it last night.

It's never as good as normal Big Brother.
B

I'd have more fun chewing my own hand off whilst watching paint dry.
L

Theres some right weirdo's in it this year. Jodie Marsh is HOOOOT! I know Barrymore, Faria Alam, thats pretty much it dont know the others.
L

I would give her 1. Lee just prefers shemen like Redders
L

If I prefered shemen then Jodie would get a slice.
M