Duties for centreback are: Stopper - supposed to be more advanced or more willing to move up to close down opponents. Defend - sort of a balanced. Cover - drops a little deeper and supposedly he's meant to mop passes behond the other defenders and so he's expected to close down.

I understand that without instructions to restrict freedom, even if I don't ask them to be more creative my players will have some freedom still and may break from instructions more or less from time to time, also without any instruction to change closing down in either side none will be at never close down. I play in cover the player with less aggression than the others.

My question: why is always the Centreback-Cover the one who darts around the field to even midfield to mark opposition ball handles even when he's accompanied by other centreback(s) in defend or even stopper? Why is the stopper the one who drops and stays deeper?

I tried this last night (I never use a C/X combo) and it worked as I wanted it to. The stopper closed down and the covering defender stayed back more.

I can only think that you're leaving a large hole in front of the Cover defender, so he has to step up and do the job there.
X

@Death Ball.. do you have a player in the DM strata?

amd what are the player instructions for both the center backs?

keep them both on close down much less(esp for the defender on cover duty)...

also, do they have any preferred moves?
D

No individual instructions for any player. I've seen the covering dart out even with one DM, though rarely, currently it was using a flat 3-5-2 with one or two defending CM's tending to drop.

Yes, having a DM improves a lot, it even helps the stopper not to be too irresponsible with his positioning. I also understand if I have a DCL-X, DCR-C and a player in my right has evaded marking it is my cover player who needs to go for the call.

The issue I have is when the opposition player is almost as close to the cover as the non-cover and still is the covering one who runs forward.

In the concrete case I am with three centrebacks. The two at the sides were Defenders, the central covering. The opponent was using a 4-2-3-1. His wingers were occupied by mine, his fullbacks were in non threatening deep areas, their striker and AMC were overloading the defensive midfielder, while the other two were occupied with his two MCs. In that situation it was clear a centreback had to step up to close one of the two overloading so the defensive midfielder could do his job on the other. The position of the one closer and more obvious choice is represented in the image below. He was central, cover just ahead, the non covering at either side and a equivalent distance from him. And once again, it was the cover player who went up to close him down, even if the other two are supposed to close down more, are no farther from the player and were equally free of marking tasks. Yeah, defend role wouldn't make them be so aggresive closing down, but still they should have been more likely to do the closing down. On another note that's also important, the aggression of the cover player is 10 and the other two have aggresion at 14 or 17. And now I'm thinking I have fluid in that formation, which I rarely use (I tend to prefer balanced or rigid), so that would be allowing them a bit more of freedom. 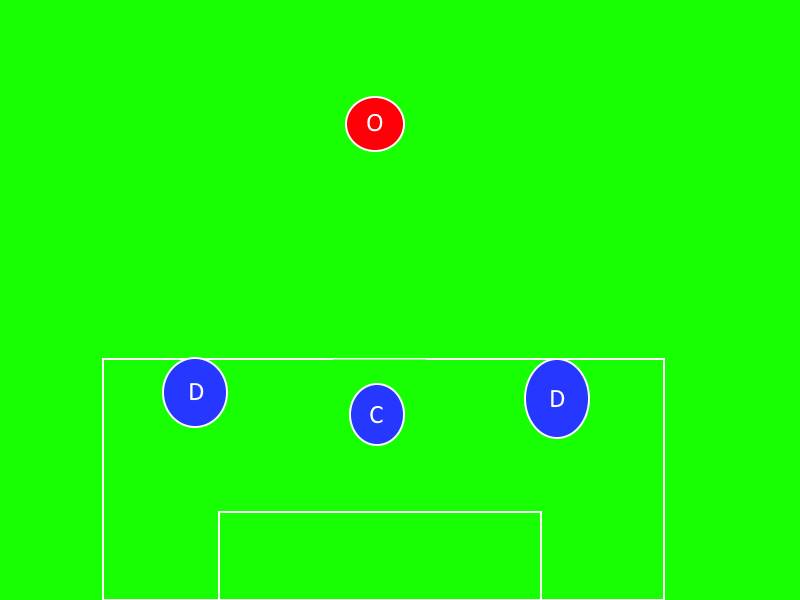 Still, the issue is not as much as in that concrete play the Cover player stepped out as the fact it's always the cover player who steps out. Not just in this version. I've seen it even when using DMs. In FM13 with a 4-5-1 (DM-AMR/L) I once saw: DL, DR and stopper at the edge of the area, DM ahead of the semicircle of the area, the cover past the midfield line closing their DM. And they were starting all from deep, so none of may players in my half were still marking anyone.

I haven't taken note of the matches and times, so I don't have a pkm or video to show.

Ok, then there must something in my tactics that I consistently do without realizing it turns upside down the centreback roles. one thing I know and why I didn't ask in FM13 is that at that time I was looking at it as the attributes rather than promoting the role to make the behavior more marked, using them to soften the effects, so as to have a stopper not too easily convinced to move out of position, use a player with low aggression and to mitigate possible excess of the cover dropping back, use a higher aggression for that. So back then I blamed it on that. But in this version, when I use a cover defender, I'm looking he's the one with less aggression first, thenbravery of the two.

Tactic in that case shown above, which is the one using a covering has one of two shapes, none of which is considered finished:

Control, fluid. Then it can have longer passing or either of retain possession or shorter passing, no creativity instructions, no defensive line or width instructions, lower tempo or nothing, sometimes pass into space.

Which one I use depends on opposition, mood, how the match has been going.

I will be doing the closing down less individual instruction for the covering defender. I will try as well closing down more for the other two or setting them to stoppers in the friendlies and do some more stuff for more serious look at what goes on when the cover player is the one deciding to move up.
Last edited: Aug 21, 2015
X

do you any player who can play as sweeper?

that aside, do you have the team on close down much more?

use player instruction for the cover player to hold position and close down much less, and see how it goes. if it still doesn't work out, there might be some other issue.

also, u could set the central defender as Limited defender on cover duty, that might help a lot more.
D

I've used the closing down more sparsely, but I think not with that formation.

I asked the cover to close down less and the other two I set to stopper. I didn't see any wrong behavior from the cover, though it's been only half a match I used the formation. There was one play in which he did step forward a player marked by one stopper, but that made sense as an attempt to make a two on one and isolate the more advanced player of the rival, plus he was almost in the area so it's a reasonable area where I'm not going to keep asking cover defenders to keep staying back.

Noted the other advice, I didn't realize hold position being available for centrebacks. I will be experimenting with them as well.