do you have any tatic which fits this formation? 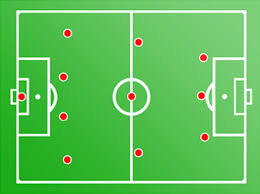 i play with 3 strikers close together as cf's and my mid field has a advanced playmaker with 2 winger is here any tactic which you have that fits this kind of formation?
thanks
T

Short answer is no. Naturally, you could win the odd game, but playing with one central mid only, and using an attacking one id asking for trouble.
Y

Like BetterHalf said. No way this is gonna work. Make your wingers central mids, and it could, you'd have a 4-3-3. Though I never tried that.
W

Have a look at http://www.fm-base.co.uk/forum/football-manager-2012-tactics-training/90781-mr-hough-rolls-back-years-fm12.html
W

like others have said, very slim chance that is going to work consistently. To even stand a chance, you would need to play extremely direct football with two ball playing central defenders, basically just missing out the midfield from the play as there is no way you can keep possession with that formation.
C

I thought I might try and explain a little why that formation will have difficulty succeeding.

In the modern game control of central midfield is paramount. Whether you choose to shut down your opponents chances to pass/dribble through the middle, or control the middle through passing and possession, you have to have a significant presence in the middle to make sure your opponents don't dominate the game.

most teams will actually use 3 or more center mid-fielders to accomplish this, especially in leagues outside of the UK. Fielding only one center mid is suicide both defensively and offensively. he will be passed/dribbled around, as well as ganged up on when he does manage to get the ball himself.