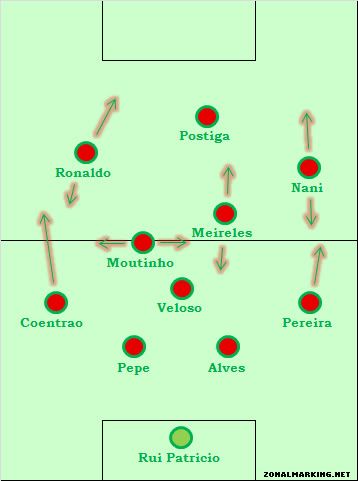 Portugal's probable starting line-up
​
Such is their habit for producing a certain type of footballer, it rather feels like we’ve encountered a Portugal side with these strengths and weaknesses many times before.
Portugal is home to the superstar winger. For years their highest-profile player has resided on the flank – first Luis Figo, then Cristiano Ronaldo – with a slight overlap between the two. Simao Sabrosa, Ricardo Quaresma and Nani have all been hyped as a potential world beater – Simao has now retired from international football, Quaresma is on the fringes of the squad, and Nani will start on the opposite flank to Ronaldo, keen to make an impact having missed the 2010 World Cup through injury. “Our kids grow up learning how to dribble, how to run with the ball, how to have the ball at their feet,” Nani says of Portugal’s obsession with wingers. “They rarely play with their back to goal, that’s why I think there aren’t so many strikers in Portugal.”


Still a strong defence
This is a fairly similar squad to the one which travelled to South Africa, but the main difference is a key one – the coach. Carlos Queiroz drilled Portugal excellently at the back – they had the best defensive record at the World Cup – but his side lacked invention and penetration with the ball. After a rather messy divorce a couple of games into Portugal’s qualification campaign for Euro 2012, Paulo Bento took over, and has Portugal playing slightly more open, attractive football that fits with his status as the youngest coach at this competition.
He faces the same problems, however – and has created two of his own, after bust-ups with both Ricardo Carvalho and Jose Bosingwa meant a premature end to the international careers of two fine defenders, at least for as long as Bento is coach. It’s a shame to disturb a unit that worked so well together, although neither were assured of their place anyway: Portugal has a fearsome centre-back duo of Bruno Alves and Pepe that is excellent aerially, if a little brutal at times. Joao Pereira is now the first-choice right-back, after a good couple of seasons for Braga and Sporting, and he’s recently earned himself a move to Valencia for next season, where he’ll replace another old Portuguese right-back, Miguel. On the left there is Fabio Coentrao, who was the best left-back at the World Cup.


Number nine?
At the other end of the pitch is Portugal’s traditional weak spot. A striker is as the only thing Portugal have lacked for years (this is probably slightly untrue: Pauleta had an excellent scoring record at international level, even if he rarely played well in tournaments, while Nuno Gomes was a very intelligent striker with great movement, and had an eye for an important goal). The problem has become more evident in recent years, when those two were past their best.
As in 2010, it’s pretty much a straight choice between Hugo Almeida and Helder Postiga upfront, with the latter likely to get the nod. Almeida is a straight target man, whereas Postiga’s link-up play is better but he’s become a more basic number nine as the years have gone by. Neither are prolific – and so the stereotype remains true – but this isn’t necessarily a huge problem. International football is full of number nines who ‘do a job’ in a successful side without being superb goalscorers, and besides, this has been such an issue for Portugal for so long, that they’ve now become accustomed to playing without a Golden Boot contender up top. It isn’t a shock situation, and it’s reasonable to suggest that Cristiano Ronaldo (146 goals in 144 games for Real Madrid) and Nani can provide goals from the flanks.


Number ten?
But Portugal have developed a secondary problem – a lack of creativity. While Figo received the most acclaim, the heartbeat of Portugal’s ‘golden generation’ was Rui Costa, as pure and as brilliant a number ten as Europe has seen this century. His decline towards the end of his career happened at a perfect time for Portugal, as Deco acquired Portuguese citizenship and became a top-class player at roughly the same point. The transition between the two was slightly clunky (and it was sad that Rui Costa effectively got bumped down to a reserve on home soil in his final tournament in 2004), but at least there was always a constant source of creativity. After Deco, and with the sad injury to the brilliant Zenit playmaker Danny (on the fringes of the side, yet capable of breaking through) there is nothing.
Well, that’s not quite true. Central midfield is traditionally an area Portugal excel in, yet at the World Cup there was a huge problem with a lack of ambition from that zone. It was obvious before the tournament that Queiroz wasn’t allowing his midfielders any freedom of expression or license to move forward, and it was incredible to see the ball carried forward down the flanks, only for three central midfielders to sit behind the ball, broadly doing the same job. You basically need ball-winning, passing and creative ability from a midfield trio, but Portugal had three players covering the first two jobs between them, and no-one moving forward towards the front three, with Deco staying deep in the role he was used to for Chelsea, rather than the position he played so well for Porto back in 2003/04.


Midfield duties
There’s a danger of that happening again. Portugal’s deep-lying midfielder will be Miguel Veloso, who is more of a cultured player than a pure scrapper, and sits in front of the back four spreading play to the flanks – particularly to Portugal’s right, as he is naturally left-footed. He needs to be more active to get into positions to receive the ball – he still doesn’t quite seem accustomed to playing so deep. Slightly ahead to his left, his old Sporting colleague Joao Moutinho is an intelligent, gifted passing midfielder who keeps things simple, and also likes to look to wide positions rather than play an incisive forward pass. There’s already a slight overlap in duties there.
The third midfielder, therefore, has to be more forward-thinking. However, in the absence of a Rui Costa or a Deco, the verticality will instead come from Raul Meireles (with Ruben Micael a similar option). He is essentially a box-to-box player, a jack of all trades, shoved forward to connect the midfield and the attack. It’s not an ideal situation, but it’s workable – and in the pre-tournament friendlies there was a good understanding between the two more advanced midfielders – one came deep when the other moved higher up, and vice-versa.
Yet for all the passing quality from deep and the energy from Meireles, there’s still a problem with creativity. Again, Portugal will be forced to look to the flanks, but can you expect two wingers, however talented, to do the job of a number ten and a number nine? That’s even before you think about them doing their duties as wide players.


Wingers
Ronaldo, inevitably, is given license to do as he pleases, to a certain extent. He plays narrow on the left, always looking to come inside into a shooting position. That narrowness is compensated for by the attacking thrust of Coentrao coming down the outside – those two had a good relationship even before Coentrao joined Ronaldo at Real Madrid, and the left flank is certainly the strongest part of the side going forward (although opposition right-backs can ask questions of Ronaldo’s defensive awareness by breaking quickly). Pereira supports Nani well, but with less gusto and excitement, in addition to the fact that Nani stays wider.
Despite a strong defensive unit, it’s debatable whether Portugal are good enough at stopping counter-attacks – Veloso isn’t a natural holder (Custodio, a back-up, is, and “has different characteristics to all the other midfielders – he is a positional player who is good for this single role,” says Bento) and the centre-backs aren’t the quickest.
In charge of a side that neither scored nor conceded many goals at the World Cup, Bento will probably need to make good use of his bench. There, Portugal have options. Hugo Viana, originally omitted from the squad yet given a late call-up after the injury to Carlos Martins, offers an ability to play clever passes from midfield. Introducing him for one of Portugal’s midfield trio would be a good way to play a more proactive game without taking a big gamble, although Bento’s original selection indicates he’s not a huge fan of the Braga player. “Hugo Viana had a good season, he’s a good player, but in view of our style of play he did not fit into this 23-man list,” he had said.
On the flanks, there is Quaresma – unpredictable and often underwhelming, but exactly the kind of player you’d given ten minutes to ‘try and make something happen’, although Silvestre Varela might be a more likely supersub, having reluctantly grown used to that role at Porto.
Upfront, Almeida will probably start on the bench and is a more direct version of Postiga. Nelson Oliveira is a rough diamond – the Benfica youngster “offers us something different to our other two strikers, and he is a young player with a lot of potential and a lot of quality,” in Bento’s words, and could be a revelation.


Conclusion
There will be few surprises from Portugal. They’ll retain the ball well, and look to the flanks quickly for Ronaldo and Nani to provide a moment of magic. If Ronaldo is on top of his game, he’s the most dangerous attacker in the tournament, and therefore Portugal have a decent chance of a good run – but it’s rare for a victorious international side to rely on individual brilliance over attacking cohesion and variation.


Quick guide
Coach – Paulo Bento
Formation – 4-3-3
Key player – Cristiano Ronaldo
Strength – the flanks, specifically the left due to the support of Coentrao
Weakness – the double problem of a lack of creativity and a lack of a true poacher
Key tactical question – Is Meireles good enough in his advanced position to connect midfield and attack?
Key coach – “If the team score plenty of goals, it really doesn’t matter who gets them as long as we win and our attacking plan works. We have a lot of attacking options and I am confident that our strikers are good enough.”
Betfair odds: 21.0 (20/1)
Recommended bet: Ronaldo to be Portugal’s top scorer at 2.9
Further reading: The sublime Portugoal

Defence looks pretty strong but always worry about the striker for them.
A

Crux of the matter is that if Ronaldo/Nani are on top of their game then Portugal have a good chance of winning their games but if they are not which is more likely imo, they are very unbalanced
K

On paper they still look a major threat but Portugal rely on Ronaldo to pull something magic out of the bag far too often. Horrible against Turkey the other night, if they play like they did in the qualifiers or that last game, they will be lucky to get a point out of the group of death.
A

Every time I watched them in qualifying they were distinctly average. Not expecting anything from them in this tournament.
D

After Queiroz and the WC 2010, several players such as Simao, Tiago, Ricardo Carvalho and Bosingwa retired (the national team), and I honestly think that with those 4 players we could surprise the world in this group. Without them, and a quality striker (Hugo Almeida and Helder Postiga were never good enough and Nelson Oliveira isn't old enough), I expect us to get the 3 points from Denmark, and I'm not even sure about that.

Cannot see them getting out of the group.
Z