That 5 is way too close to being a A XD 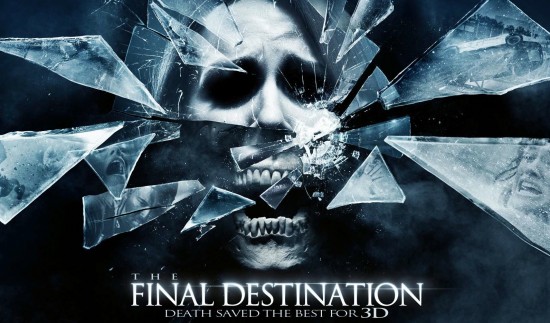 ]In one of the worst title changes of the last few years, Warner Bros has apparently decided to change the title of the fifth Final Destination movie from Final Destination 5 to 5nal Destination. What do you think?
I guess it isn’t quite as bas as the Fast and the Furious sequel title 2 Fast 2 Furious, right? Also, ****** Disgusting has learned that the opening of the movie will involve…. (highlight the invisotext to reveal possible spoilers) the collapse of a suspension bridge. Sounds like it might be full of possible chain reaction cinematic deaths.


The 3D sequel will be helmed by James Cameron protege Steven Quale. Quale is a long time associate of James Cameron, recruited out of USC film school by Cameron, beginning his career as a production assistant on The Abyss. He continued as a special projects coordinator on Terminator 2: Judgement Day and True Lies. Quale later made his second unit directorial debut on Titanic, and has credits have since included The Adventures of Rocky & Bullwinkle, The Haunted Mansion, and Avatar (where he also functioned as a visual effects supervisor. He also directed the Cameron-produced IMAX documentary Aliens of the Deep. He also supposedly did some uncredited special effects work on some of the Cameron films. Seems like a logical choice.
Eric Heisserer (who wrote a draft of the new A Nightmare on Elm Street and The Thing remakes) is working on the script. 5nal Destination is scheduled to hit theaters on August 26th, 2011.
I

Another one? They are fail imo. Hate the films. Didnt even know there was 4th.
R

They're trying to be down and hip,hop & happenin' with the kids of today
G