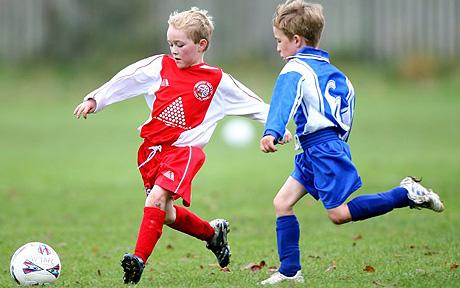 The dawning of each new Football Manager season brings with it renewed hope that this will be the year that you pluck the next world star from the back streets of Buenos Aires or the favelas of Rio de Janeiro.

Expectancy of signing tomorrow's stars today is heightened as "newgens" are introduced into the game during pre-season. Newgens are players aged between 14 and 20 who are unique to your game and are designed to give the FM world an ever expanding feel.

A few of these new players will be destined to reach the very top of the game whilst others will undoubtedly fade into lower league obscurity. Spotting the best newgens early and signing them to your team before nurturing them through those formative early years can be utterly invaluable, either by improving the long-terms prospects of your side or boosting your finances when you sell them on to a bigger club for a sizeable profit.

But you'll need to be quick if you want to add the brightest young talents to your squad as you can be sure that scouts from Europe's elite clubs won't be far behind. Of course, it helps if you know where to look!


A FEW WORDS ABOUT POTENTIAL ABILITY

So what is it that has every big club fighting for a young player's signature?

It is this PA rating that is all important when signing young players, the higher the score the greater the chance that the player will blossom into a real star.

To help illustrate how CA/PA translates into real life terms I have listed the ratings for some of the game's better known players as they start the game:


Lionel Messi (194/197)
Cristiano Ronaldo (190/195)
Wayne Rooney (178/184)
Gareth Bale (165/180)
Jack Wilshere (134/178)
CA and PA ratings are shown in the game, however, instead they are alluded to in your staff and scout reports using a rating of between 0 and 5 stars. To spot the most talented youngsters you will need to employ scouts with a high "Judging Player Potential" attribute. Placed in the right nations these scouts can be the difference between signing the new Cristiano Ronaldo or the next Chris Iwelumo!

Of course not every player is going to reach the dizzying heights predicted for them, history is littered with the sad stories of talented footballers who failed to make it to the top, but with a high PA rating there's at least a chance that the player could become one of the greats.


THE EXPERIMENT SET UP

In an effort to identify where the best new talent is likely to surface I've studied an FM game-save spanning 10 years, looking only at newgen players with a PA rating of 170 or higher.

To achieve a decent overview of the FM world I used a small database that encompassed all the continents, with the top divisions from the following nations loaded:

What makes finding newgens with high potential all the more tricky is the small number that are generated each season... put simply, gifted footballers don't grow on trees! 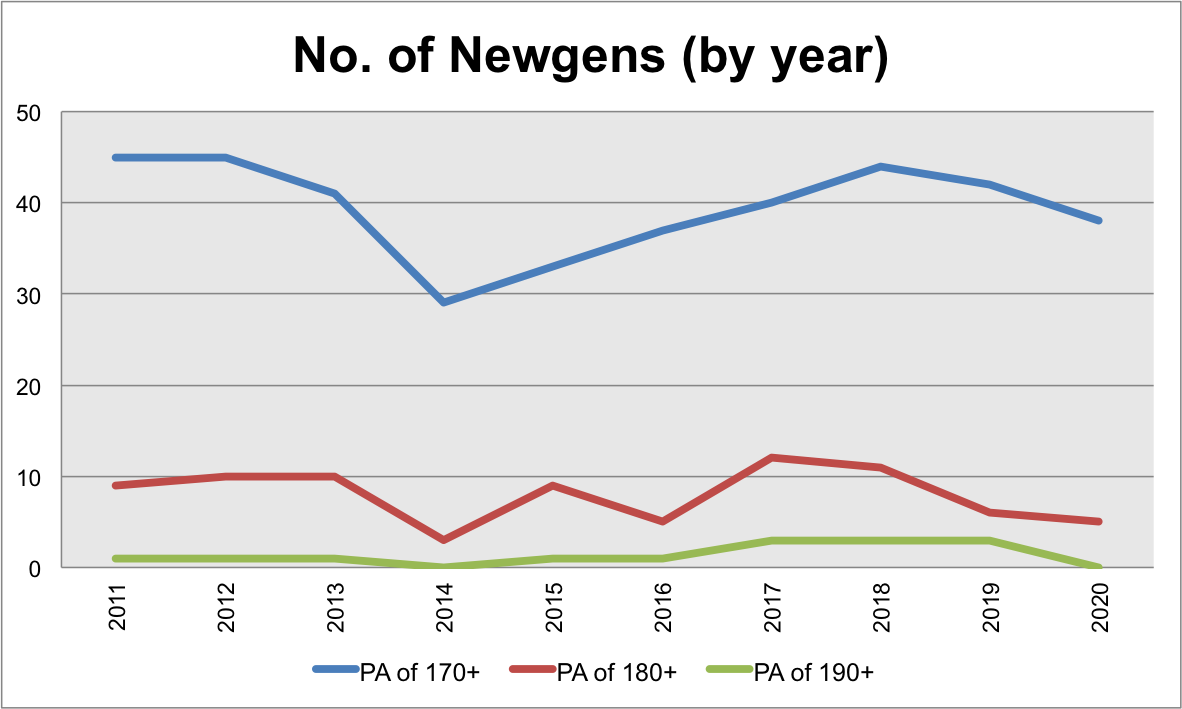 With the game generating such a low number of top quality youngsters each year, and with hundreds of clubs on the look-out for this talent, knowing where to send your scouts is of paramount importance.

When we take a look at the number of high potential newgens created by continent it shouldn't surprise anyone to learn that Europe, the world's biggest footballing continent, comes out on top. Less predictable, however, was Africa finishing ahead of South America. 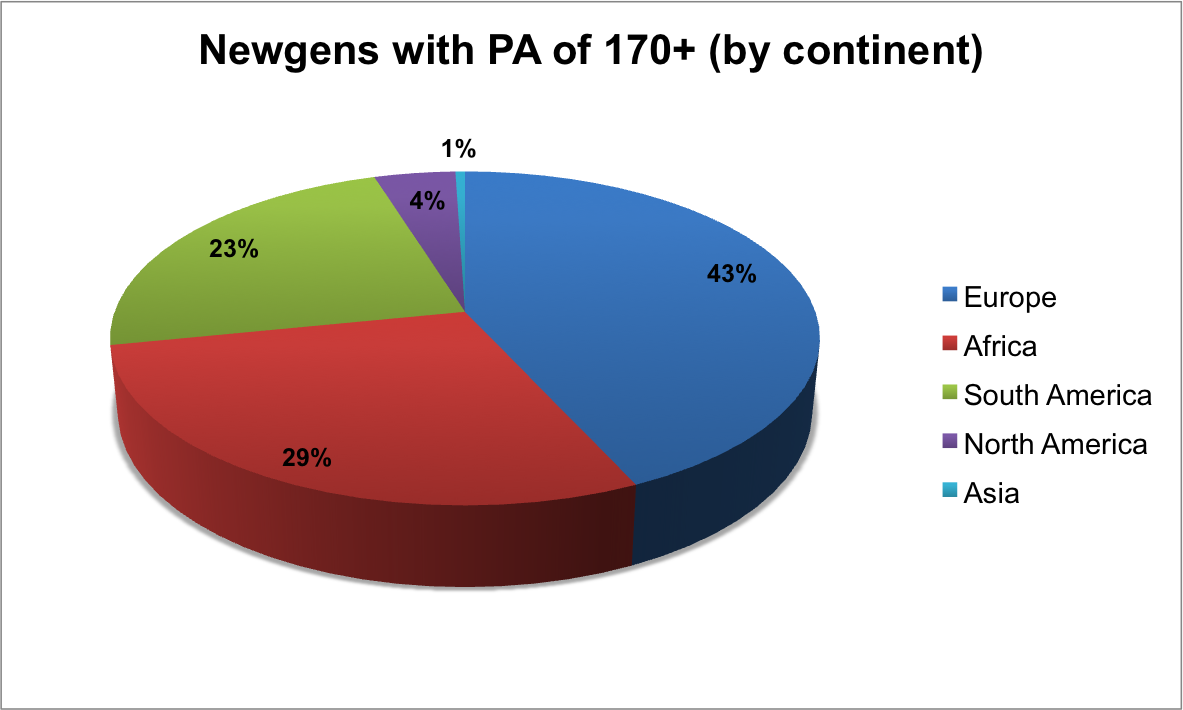 Despite South America's poor return as a continent, Brazil consistently produced the greatest number of high potential newgens and Argentina was the third best nation. These two nations accounted for over 70% of all South American newgens, and Brazil alone generated almost 10% of the experiment total.

Of the European nations Italy were the second best nation for producing talented footballers with 30 high quality youngsters hailing from. Much as expected France, Germany and Spain all featured in the top ten, but I didn't expect to see Croatia this high in the list. The Croats actually produced more high potential newgens than more established European countries such as England, Holland and Portugal.

Across Africa the spread of newgens was quite evenly spread, with Nigeria and Tunisia appearing in the top ten and Morocco, Senegal, Cameroon, Algeria and the Ivory Coast all making the top twenty. 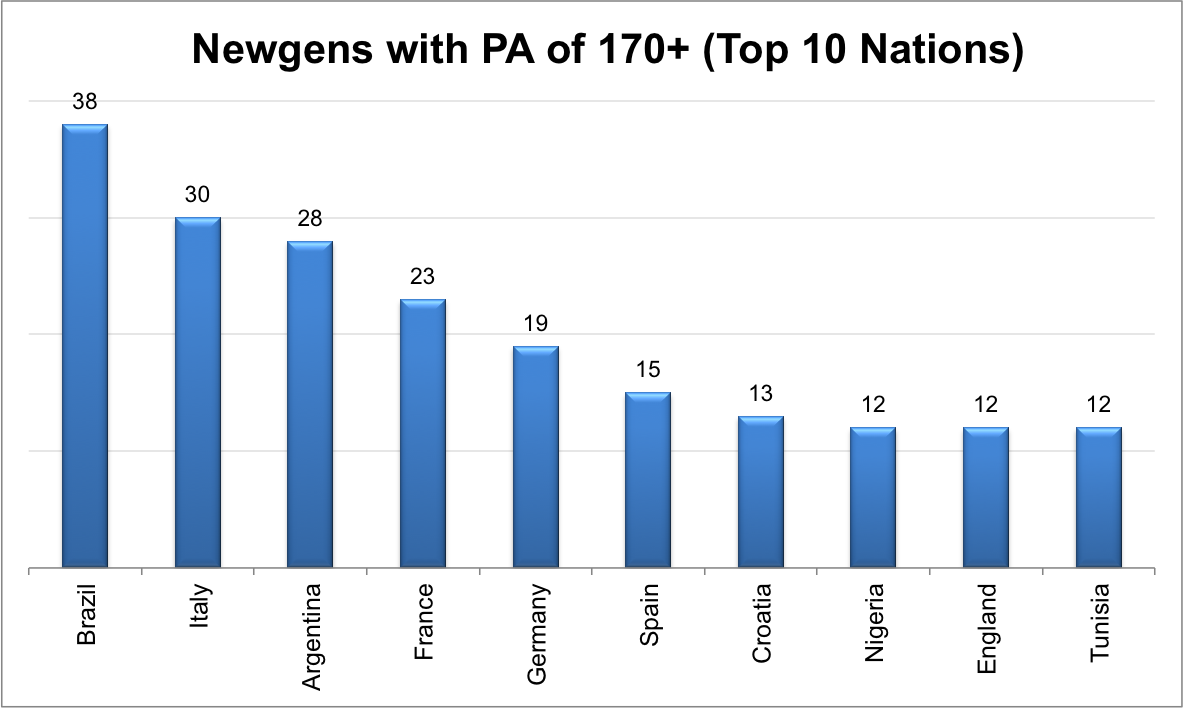 On average, all of the top nations produced at least one newgen with high PA every season whilst Brazil weighed in with a staggering 3.8 per season! 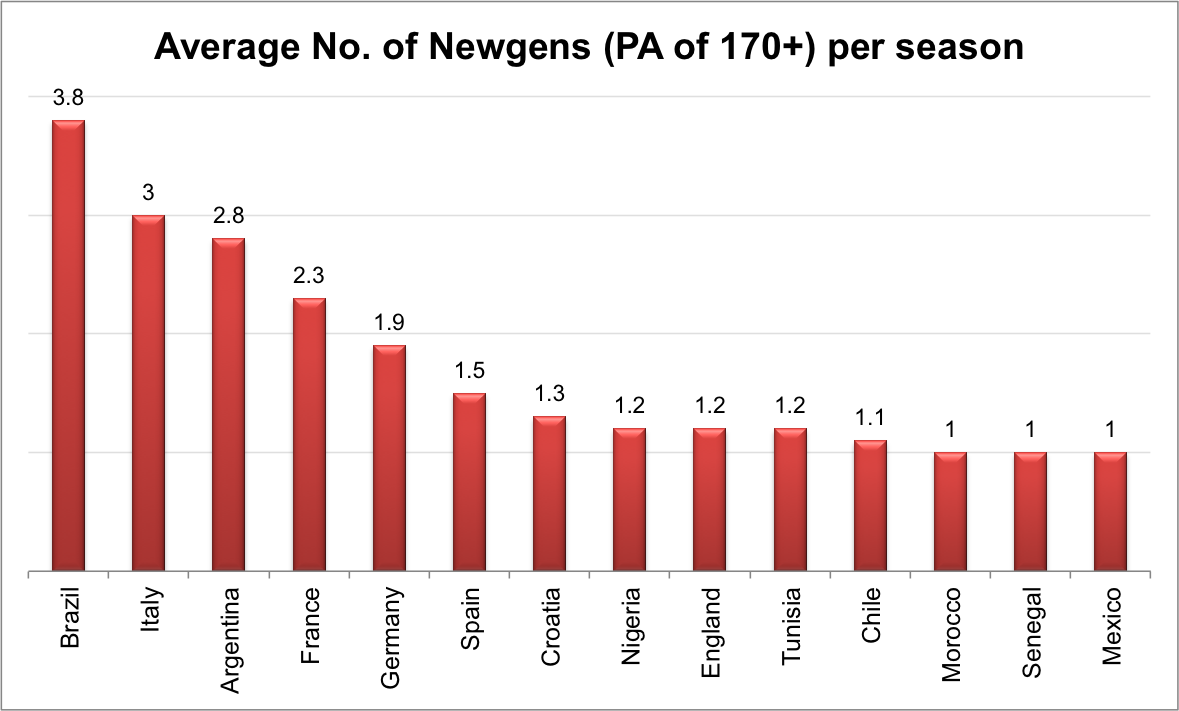 Furthermore, if you are considering forming a partnership with another club in the hope of signing their best young players then you might want to consider ASEC (Ivory Coast), NK Dinamo (Croatia), Enyimba (Nigeria), ES Tunis (Tunisia) or Gremio (Brazil). 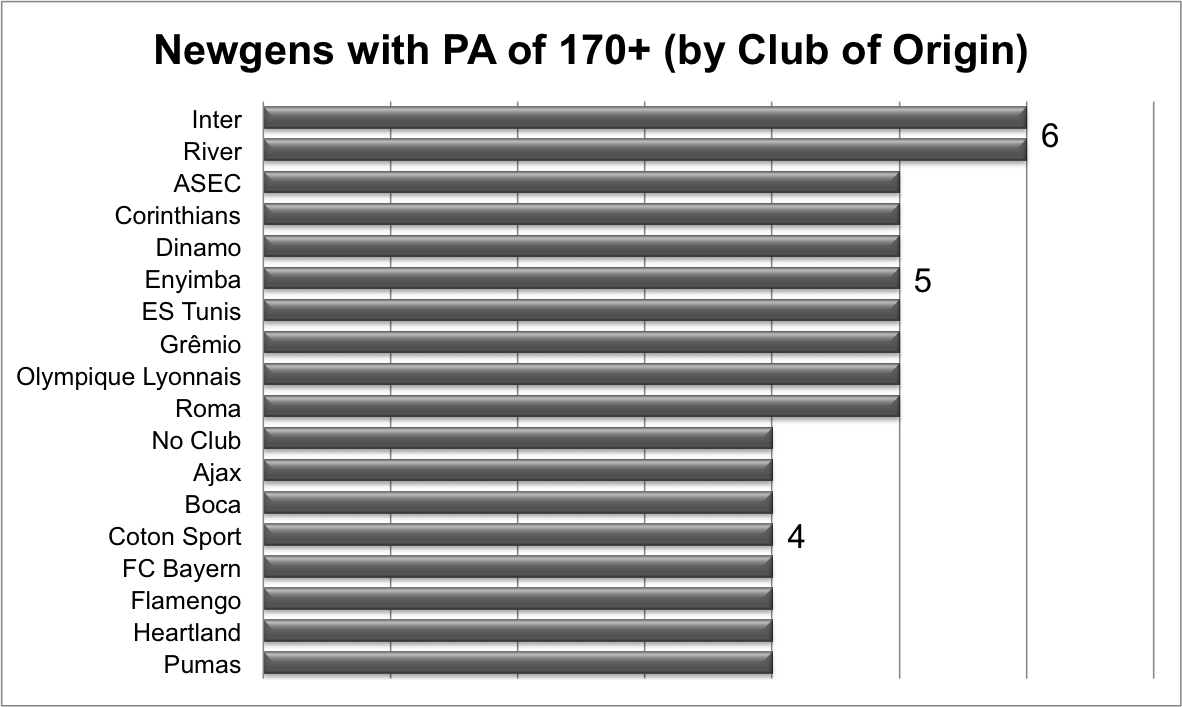 Having looked at where the best newgens were being generated I turned my attention to the type of players that were being introduced. Here, there were echoes of the playground where every young kid wants to play upfront. Almost a third of all newgens created during the experiment were most naturally suited to playing as a striker, with wingers and central midfielders the second most suitable roles. At the other end of the scale, however, only 7% of newgens were most suited to playing as defensive or attacking midfielders. 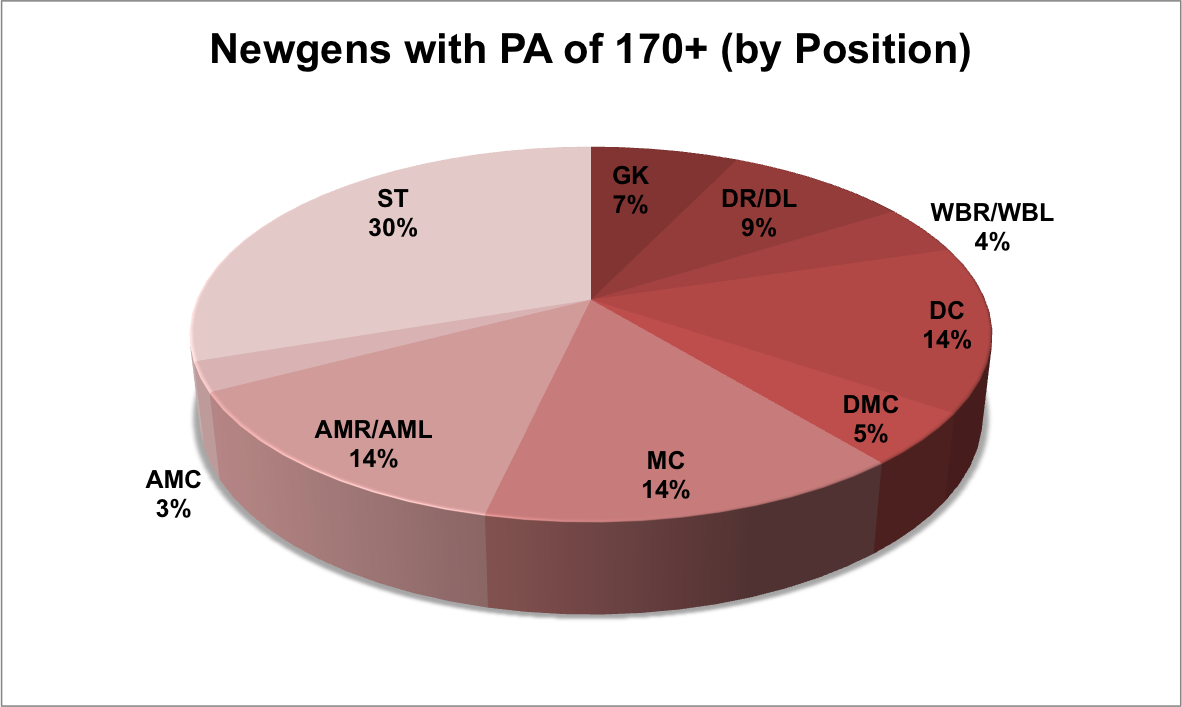 There were more Brazilian youngsters suited to playing as wingers and central midfielders than any other nationality whilst Italy produced the most strikers. 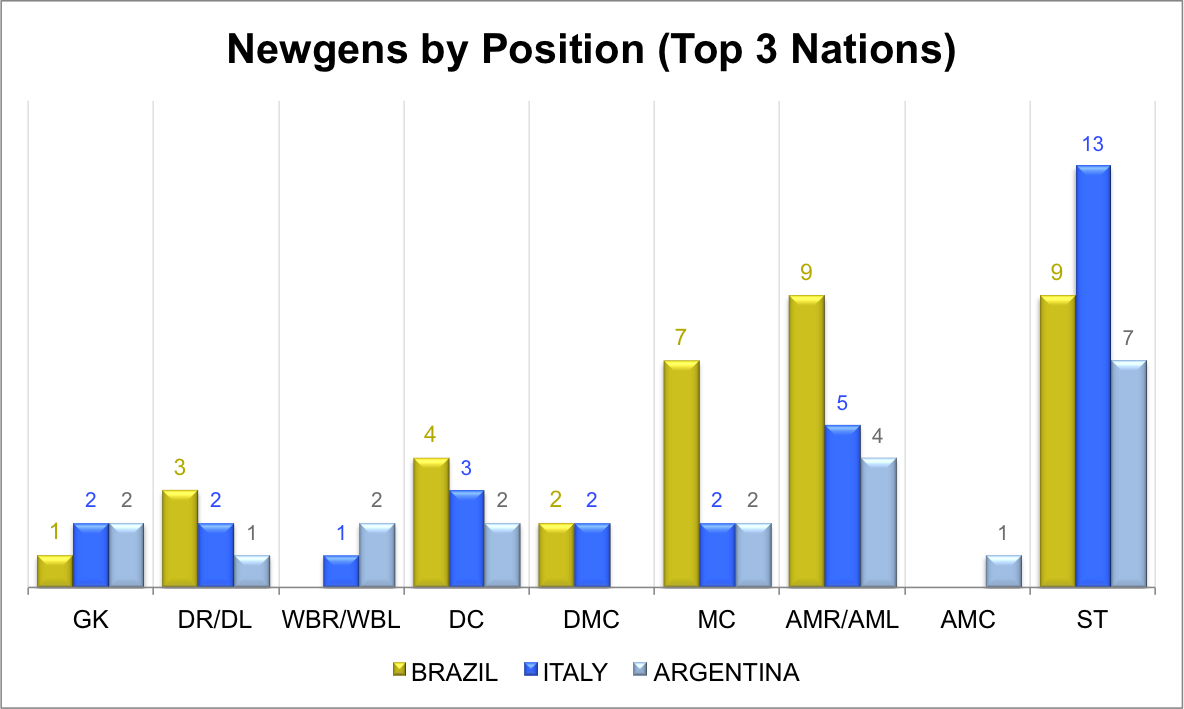 So that concludes the experiment findings, some of the results were expected but others came as a complete surprise. I'll finish the article with one last statistic, over the course of the experiment there was one newgen created with the highest possible PA score of 200. Where was he he from? Slovakia!
Last edited: Apr 23, 2011
S

This is a great statistics overview. Why are you surprised that we Croats created so many great newgens? We have already about 10-15 under-16 age players at least who can make it to the top. We love football, and some call our nation 'The European Brazil'.
M

Nice one Dan, this deserves a sticky
P

the staticitics doesn't really surprise me that much, just the low AMC procentage,
the flair creativity combo in regen is really rare this year, idk why but really creative players with 15+ flair creativity ain't so easy to find,
P

shadowsc2 said:
This is a great statistics overview. Why are you surprised that we Croats created so many great newgens? We have already about 10-15 under-16 age players at least who can make it to the top. We love football, and some call our nation 'The European Brazil'.
Click to expand...

I didn't really expect them to feature above nations such as Portugal, Holland or even England but you are right, over recent years the nation has produced some cracking players like Modric. I guess it goes to show that SI have their finger on the pulse of world football!

In truth I'm a big admirer of Croatian football... after all my favourite player of all time is a Croat, Robert Prosinecki :wub:

2014 looked like it was a bit of a poor year any idea why? and aslo it's suprising there was hardly any AMC's but saying that I havn't really seen many this year aswell.
P

___ said:
2014 looked like it was a bit of a poor year any idea why? and aslo it's suprising there was hardly any AMC's but saying that I havn't really seen many this year aswell.
Click to expand...

Good question, I'm assuming that the game 'limits' the number of top quality players available and therefore exercises some sort of "one in, one out" process to keep this in check? Anyone out there know the answer?
A

This is SO good!
G

great stuff bud, I have stickied it and bookmarked it surprising that not many Amc's were generated.... that is normally bread and butter for Brazil and Argentina...

There is this monster Cm (Morroccan) 19yrs old from Es Tunis in my game at the moment Schalke are still not accepting 30m for him!

also a bit saddened by the amount of keepers coming through I guess I was one of the only ones who always wanted to play keepers since a young age when as you said, all the kids want to play upfront!

but what happens if you load up every league from Europe, but have a large DB will this help me get new re gens in South American or Africa?
Y

I don't know if this should be wrote in this thread but I am always on the look out for young English new gens/regens or however else you can call them but I never seem to find any with great future talent.

I send my highly rated scouts across the seas with some remaining in England and the problem I find is that the 15/17 year old youngsters from England or Britain seem to all have no ability to challenge in my team potentially, it's interesting though that there are very few decent English prospects each season, and the ones that are decent have all started at Manchester United.

I get the scouts back from abroad and it's dominated by France highly rated youngsters, and then Spain and Italy and these are the kind of kids who could turn out amazing given the right guidance.

I started out wanting to bring through home grown youth talent from Britain but in 2014 my youth team is slowly starting to become a all non English side besides the ones that are recruited each season which there are never any outstanding prospects entering my youth team even though I have an established youth recruitment.

Is there anyway you can improve the quality of newgens being created for England?

Does anyone else set the search engine to age of at most 21, and international Caps to at least 1 to find good talent. You get some obvious ones but i have found some real gems that way.
R

Also check out Dinamo- they usually produce a good Croation regen or two a year.
C

i got this new gen called alberto from rayo for 4.7mill on my hercules save hes only 18 and he was amazing for the under 19s so i put him in my first team and he came second in spainish young player of the year!http://i166.photobucket.com/albums/u115/sirmasterchris/SpainAwards_AwardWinners.png