From the Football League to Champions League


After finally settling with FM2014, I decided I would take on Crawley Town. I began to follow them after their FA Cup run that took them to Old Trafford so when I was looking for a football league side to manage I was instantly drawn to them.

I'll be looking to continue Crawley's surge up the English Pyramid. I am currently midway through the 2017 / 18 season so it will be season updates until I catch up with myself.


Despite the lack of funds I was confident I could guide the Crawley Town side to the play-offs, the team was decent especially with Matt Tubbs up front, backed up by pacey wingers and solid central defenders.

I obviously needed to add to the side and look to remove anyone who I didn't think met the requirements.

Sean Dillon came in and was sent back after a couple of weeks after I realised I wasn't to desperate for him seeing as McFadzean and Connolly were probably better and there was players able to step in if injuries and suspensions came into play. Montano and Lopez were two players who I felt could add to the side out wide. Both featured in a rotation system early on but when I began to play loanee Luke Garbutt as a winger and he took the league by storm and was absolutely huge for us out wide on the left.

McKenna came in for his experience and was pretty solid despite his age. Morris came in on loan from Blackburn due to his versatility and work rate. Monakana came in, I've always thought he was decent and was surprised I was able to get him in, he played in a rotational system on the right side of the pitch. Giverin came in to add to the squad depth. Other players who came in to add depth were Gimpel, Etheridge and Neita.

We did spend some money as Rob Kiernan fell out with the Wigan boss. His stats were excellent and was in and around the first team but didn't play a whole lot that season due to Mark Connolly and McFadzean performing very well.

We let go of legend Sergio Torres as we had younger, better players coming in and I felt he wouldn't have done a whole lot for us. James Hurst joined bust Hearts for 130k, he wouldn't feature as Paul Connolly was a better right back and the money could have helped us out a lot. Dannie Bulman is aging and I didn't need him. 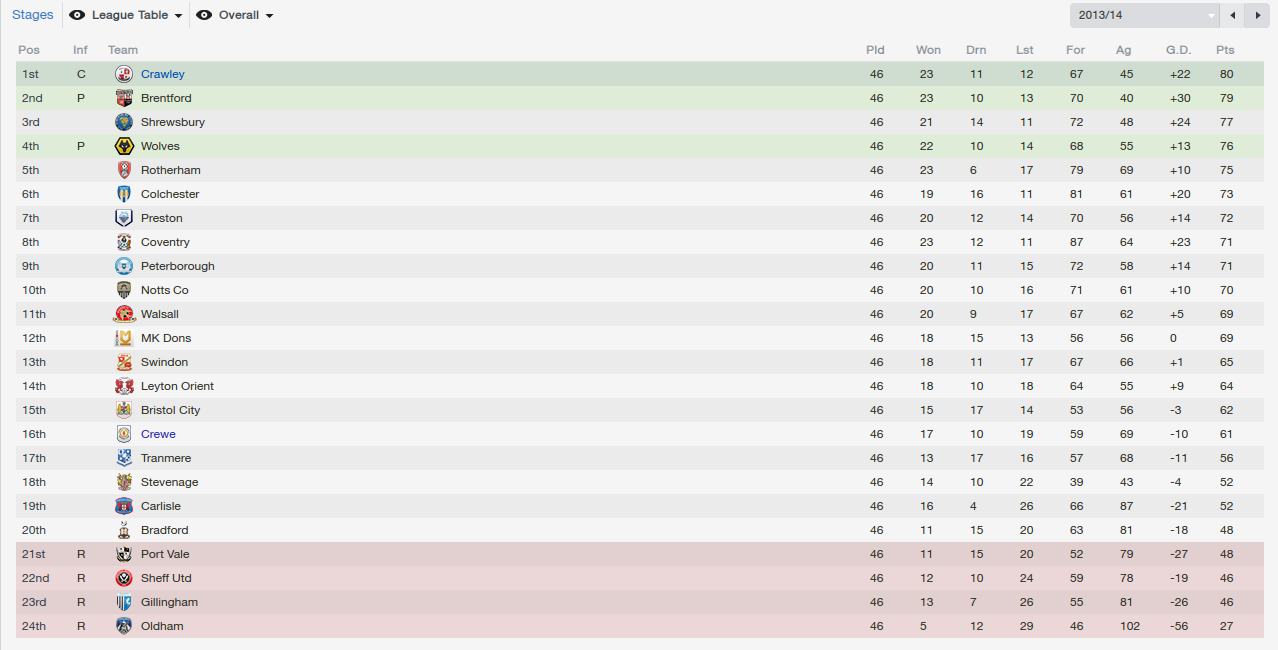 I wasn't expecting automatic promotion but our performances across the season were enough, it did come down to the final day where I was pushing for second but results elsewhere meant we ended the season top. Matt Tubbs' 26 league goals in 42 appearances were huge. Andy Drury was also a key player in the middle of the park, thankfully we were a very tough team to beat at home because our away record wasn't too pretty.

I believe Matt Tubbs was the fans' player of the season with an average rating of 7.14 and 31 goals in 47 games (all comp). Tubbs and Luke Garbutt were my 2 stars of the season. Below is the team of the year 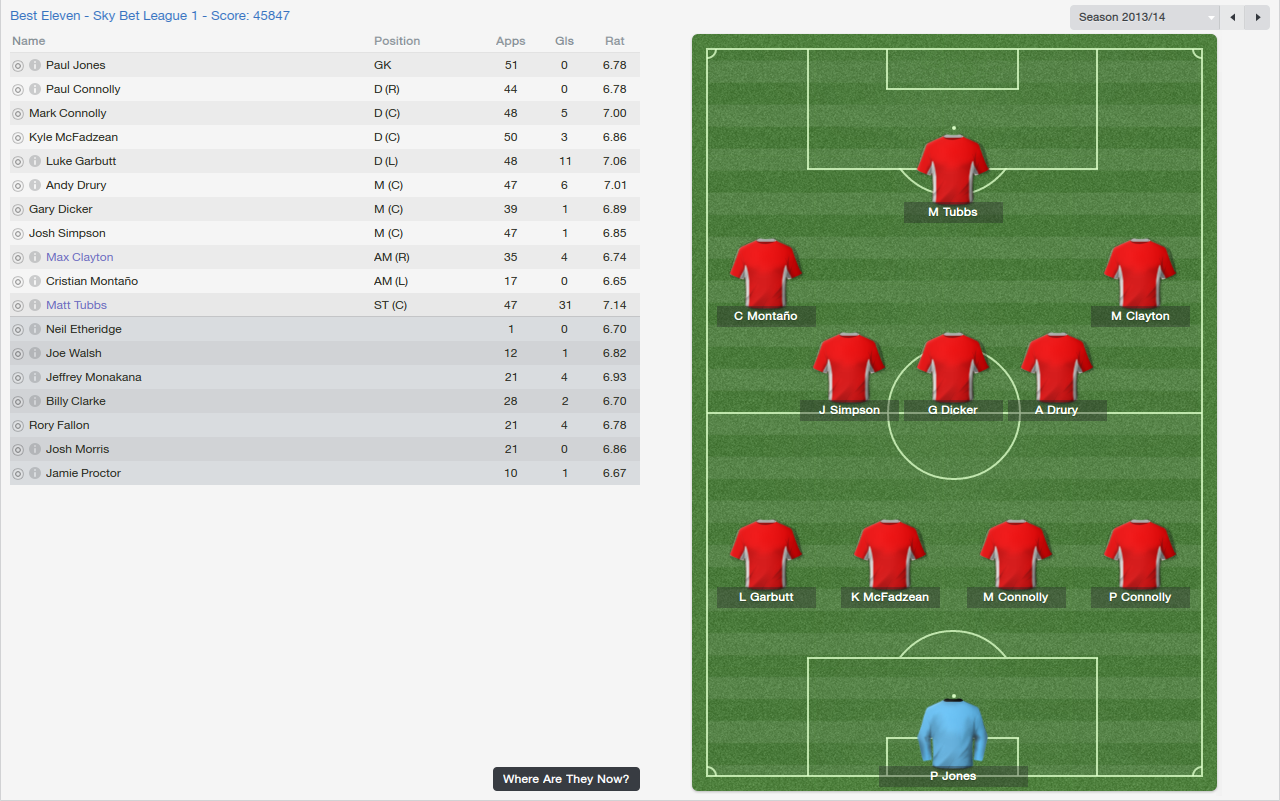 However, I had Garbutt play in the left wing role and that is where he really performed. Jones was fantastic in goals as well accompanied by his solid back 4.

Nothing special, played a weaker side and we were knocked out on penalties.

Nothing special unfortunately. Came close to beating high-flying Championship side Brighton away but they were to strong in the end.

Again, nothing special after being knocked out at home by MK Dons.

Would have enjoyed a nice cup run but we got our promotion and a decent side to bring into the Championship. Finances have been pretty awful though.
​
C

Some big moves. We said good bye to Andy Drury, I felt we had to cash in on him while we could and I knew I had suitable replacements coming into the midfield. Also said good bye to a couple of the freebies from the season before such as Nigel Neita and Monty Gimpel who hardly featured. Billy Clarke also left as I didn't even nearly rate him after a slow season last time around.

We decided to spend some money, we brought in Scottish midfielders Andrew Shinnie and John Fleck for just over ?1.4m, I also decided to bring in Barry Bannan on loan meaning I had a Scottish trio across the middle of the park, he was replaced by Abdul Razak for the final 3 months as he refused to stay at the end of his loan term and I desperately needed a good midfielder in there.

Andre Moritz came in for free as well, his stats are incredible and it was a very nice pick up. Jack Dunn and Denny Johnstone also joined the side to help with depth. Dunn featured regularly where as Johnstone didn't. Ryan Mason also came in but missed out on around 6 months with a broken leg.

Luke Garbutt signed permanently for just over ?300k after a storming season for us last time out. Tubbs also extended his loan deal but isn't listed above.

We did it.. Somehow! I knew it was always going to be possible to hit the play-off spots due to how tight the league is but I'd have been happy going for it next year. We hit some great form at the turn of the year and turned many of our draws into wins. We could have pushed for second but more draws appeared and we were lucky to secure 5th! 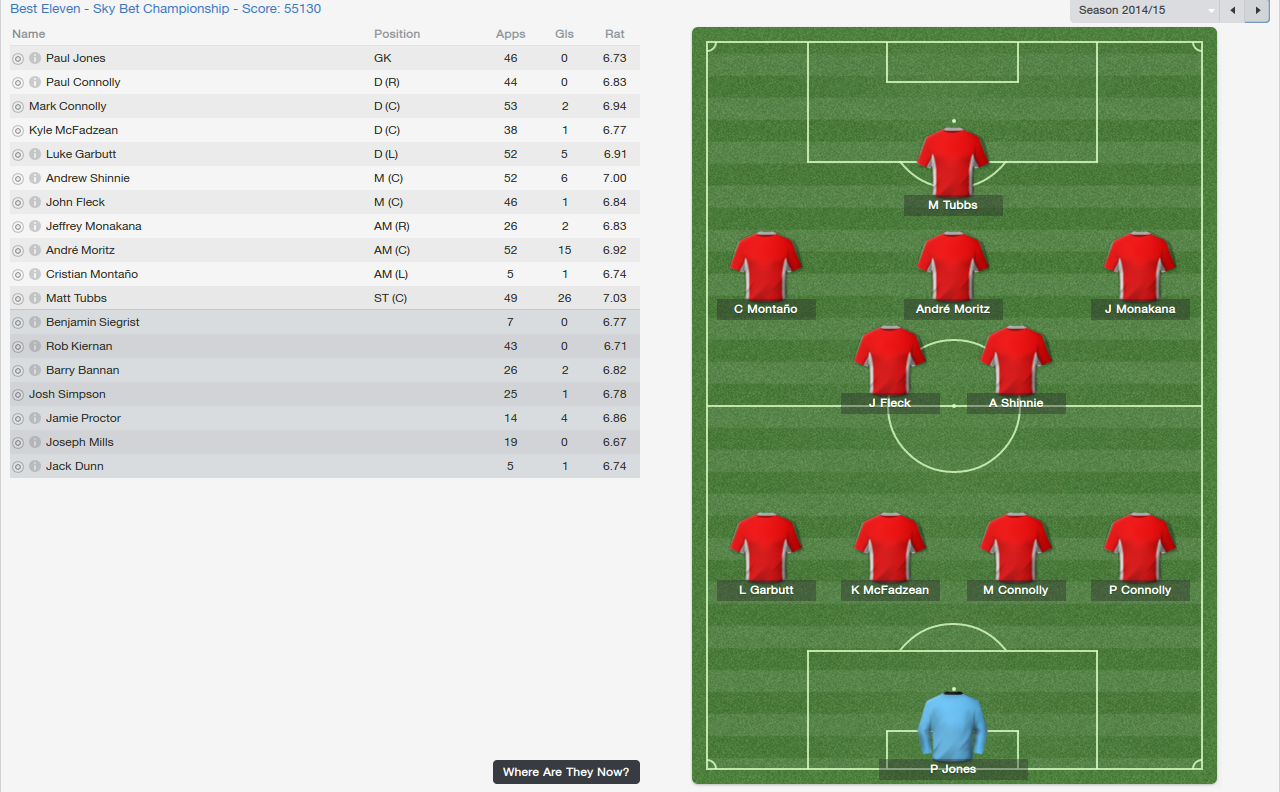 These ties were ridiculously close and very nerve wracking. Neither Forrest or ourselves went for it, even at home I thought I'd be best to try and sit deep and use our wide pace to get something from a quick counter. No real chances arose in either game and we managed to get to Wembley via penalties 6-5.

Matt Tubbs and Abdul Razak's loan deals expired on the day of the final meaning I was without two very important players - one of which being our top goalscorer, the other being a very important ball winner.

I did try play a little more positively and this cost us before half time where Kazenga LuaLua used his pace to get in behind the back 4 and grab a goal. Thankfully we pressed them in the second half and grabbed an equaliser. Extra time was very slow with both sides happy to see it through to penalties. This time we edged it 5-4 with Ryan Mason returning from his leg break to score the winning penalty!

Absolutely delighted to be going into the Premier League but I need to really pray for some cash as this side isn't nearly ready for facing the big boys.

Nothing special again this year, would have liked a decent run but West Brom proved to be too much for my Crawley side.