Is three at the back the way forward for Liverpool?

The Question: Is three at the back the way forward for Liverpool?
​


Kenny Dalglish's Liverpool and Steve Bruce's Sunderland have both made eloquent recent cases for the old ploy of three centre-backs and a diamond formation.
​ 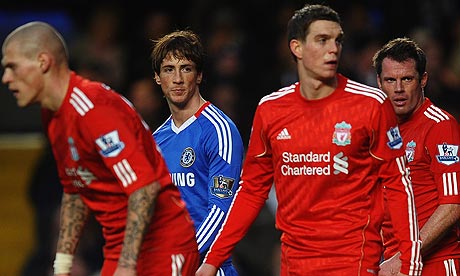 It was a strangely retro weekend in the Premier League, with scorelines from the 1950s and tactics from the 1990s. Three at the back has rather gone out of fashion over the past decade, but it has returned with a startling suddenness and effectiveness over the past week. Liverpool played with three at the back (by which I mean a system with three centre-backs, irrespective of the positioning of the full-backs) against Stoke last Wednesday, Sunderland used it against Stoke on Saturday, and then Liverpool used it against Chelsea on Sunday.
It was that use at Stamford Bridge that was most successful, although whether it would have been had Chelsea stuck to the way they have been playing for most of the past seven years and fielded a 4-3-3 rather than a diamond is debatable – then again, Kenny Dalglish probably would not have fielded his 3-5-1-1 against a 4-3-3.


The reason the deployment of three central defenders has largely fallen out of use is that it is set up to deal with two central strikers. Two of the centre-backs mark, with the other as a spare man to provide cover. Facing a lone central striker formation (most commonly 4-3-3 or 4-2-3-1), one of the centre-backs marks, there is a spare man, and then there is a redundant player. Worse, the wing-backs who are supposed to provide attacking width end up pinned back, dealing with a wide forward.


Of course, there are circumstances in which having two spare men is desirable. If a team have little intention of attacking and are looking for a 0-0 draw, then it makes a lot of sense to have two extra players plugging gaps. That was how, for instance, Estudiantes played at Velez Sarsfield in October, when they successfully got the draw they wanted to preserve their lead at the top of the Apertura. Uruguay did something similar against France at the World Cup, as did Algeria against England (although Wayne Rooney played so high, England were approaching a 4-4-2) and, slightly less successfully, North Korea did it against Brazil.
Liverpool's outlook against Chelsea was cautious, but it was not that negative. Its use, in fact, was little different to how the formation was employed in the 90s; it was there to combat an old-fashioned variant on 4-4-2. On Sunday, Chelsea played, as they had at Sunderland last Tuesday, with two central strikers and Nicolas Anelka tucked behind at the point of a midfield diamond. Anelka was superb at the Stadium of Light, but Sunderland's midfield – especially in the absence of Lee Cattermole – has a tendency to be very open.


Against Liverpool, Anelka found himself up against the perpetually under-rated Lucas Leiva and was negated, while the three of Jamie Carragher, Martin Skrtel and Daniel Agger neutered Didier Drogba and Fernando Torres so successfully that they managed only one meaningful shot between them (and that a chance bestowed not created as Maxi Rodríguez squandered possession). Torres, in fact, had only 29 touches of the ball in the 66 minutes before he was substituted.


Where Liverpool really won the battle, though, was in midfield. Against Stoke, Dalglish had played a 3-4-2-1, with a square of midfielders in the middle – two in defensive positions and two attacking. Against Chelsea, he tilted the square to become a diamond, matching Chelsea's midfield shape exactly, so as well as Lucas picking up Anelka, Steven Gerrard dealt with Frank Lampard, Maxi matched up to Michael Essien and Raul Meireles faced Mikel John Obi. Only Maxi could be said not to have won his individual duel decisively.


At the same time, Chelsea faced the problem the diamond will always have against a side playing with three centre-backs plus wing-backs. The great flaw of the diamond is that it lacks attacking width; the full-backs have to get forward and if they do not, everything becomes funnelled through the player at the diamond's tip.


José Bosingwa and Ashley Cole are ideally equipped to offer that attacking threat wide, but on Sunday they weren't able to get forward. Rather than meeting a conventional full-back 30 or 40 yards from the opponents' goal, they were engaging with Martin Kelly and Glen Johnson on halfway, and so only rarely got into areas to offer a creative outlet.


That problem for diamonds is even worse against a 4-3-3 or a 4-2-3-1, or even a 4-4-2 with wide midfielders who play high up the pitch, as the full-back is left with a choice of pushing on, hoping his side retain possession long enough that his absences from defensive duties do not matter, or sitting back offering no attacking width. The diamond tends to prosper only as a defensive formation, or in a culture where so many teams field a diamond that the lack of width does not matter because everybody has the same weakness. It is notable, for instance, that in Serie A this season, where 4-3-1-2, a variant of the diamond, predominates, Milan's three defeats have come against Cesena and Juventus, sides with attacking width, and Roma, who had Jérémy Menez pull wide from his usual central trequartista role.


Other teams may see Liverpool's success and decide to copy that against Chelsea. Even when they played a 4-3-3, it had been apparent for a while that blocking in Cole (something Kieran Richardson did superbly in Sunderland's 3-0 win at Stamford Bridge) severely restricted their attacking options. It may also be that, following the examples of Liverpool and Sunderland, opposing sides opt for three centre-backs against Stoke City.


Both Liverpool and Sunderland presumably made the decision to try to add height to the side. Liverpool could have come unstuck with Stoke fielding a lone central striker in John Carew, and the need for Agger to step up and become an auxiliary midfielder perhaps explains why they were significantly less fluent against Stoke than they have been in probably every other game since Dalglish's return.


The Sunderland centre-back pairing of Anton Ferdinand and Titus Bramble, meanwhile, have been bullied at times in the air this season, a situation not helped by Craig Gordon's lack of command of his box. The addition of John Mensah – who would surely be a first choice were he ever fit for more than a game at a time – was designed to give Sunderland an additional solidity and, set-plays aside (a fairly big aside, admittedly), the tactic worked, combating not merely Sunderland's relative aerial weakness but also the lack of a ball-winner in midfield, with both Cattermole and David Meyler injured. Sunderland's problem was that they conceded too many free-kicks in dangerous areas, and then got too deep in defending them, meaning Gordon, never the most commanding goalkeeper for all his shot-stopping abilities, was too often hemmed in (and, of course, they got the rough end of offside decisions for Stoke's first two goals).


For both Liverpool and Sunderland, it seems likely the switch to three centre-backs was a temporary measure undertaken in specific circumstances. It would be a major surprise if Sunderland were to use a similar tactic against Tottenham, or Liverpool against Wigan, on Saturday. That said, given Liverpool's lack of attacking width – and glut of good centre-backs – it is perhaps something to which Dalglish will be more open than other managers.
If nothing else, though, Liverpool and Sunderland have shown in the past week that there is still a place for three centre-backs in certain circumstances, and that it's often a good idea to set opponents a puzzle they have forgotten how to solve. It may, in a strange way, be that Dalglish's time away from day-to-day management, far from restricting his tactical options, has actually broadened them.