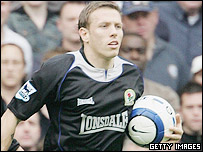 Premiership footballer Craig Bellamy is to be interviewed by police over an alleged assault on a teenage woman in a nightclub, it has emerged.

They are investigating an incident said to have occurred in Number 10 nightclub in the city on 5 February.

South Wales Police said two men would be interviewed "on a date yet to be decided".

A spokesman said: "We are investigating the alleged assault of a 19-year-old woman at the Number 10 nightclub in Mill Lane on February 5, 2006.

"Two men have been asked to attend Cardiff Central Police Station to be formally interviewed on a date yet to be decided."

Blackburn Rovers declined to comment, saying it was not a club issue.
L

This is just getting old now. When will they stop
K