It's Time to be Slaughtered, the Eternal Question

Recently, I posted my frustration at the fact that when promoted from Levante to Valencia, the new players couldn't care less who I was and didn't perform. I am now scared s**tless as I have been moved from Coventry to... Manchester United on a new campaign (don't know what the game was thinking there, I sent in an app jokingly).

There's a few solutions to the motivation problem (I set myself as automatic as I don't want to have the game give me good results just because I'm an "International Footballer." People say to have a strong motivational assistant (Mike Phelan, 18 at Motivating, so check there) and to just play better with better tactics.

Just through friendlies though, it's clear how this is going to end. The play looks quite good- Nani and Young tearing through the defenses at will, Vidal and Carrick holding midfield quite well, etc. However, the moment someone gets into a shooting position, they just punt it nowhere. On defense, we're ok, but still giving up easy goals.

While playing with better tactics is certainly important- and I do my best here- is there anything I can do? I feel like I'm most certainly doomed to losing my way to an early firing. The fact is the tactics are flowing, I get great reactions when I talk to players (every opportunity I get) but when it comes to it they overall play ter. And it's not the coaching staff's fault- they're all top notch.

83 views, 0 replies? Come on don't be shy All opinions welcome, even if it's to tell me I'm doomed!
T

Raul Madrid7 said:
83 views, 0 replies? Come on don't be shy All opinions welcome, even if it's to tell me I'm doomed!
Click to expand...

Seing that you posted late at night.....

Anyway, If you post some more Info on how you play( perhaps upload your tactic) I will try to help later today.
T

Show us your tactics and how you like to set your team up.

Also like TBH said you posted it at a time when the forums are generally quiet.
R

Here you go! Thanks for the help.

Brief explanation- I'm still in preseason and judging what the team is actually doing, so I haven't specialized the tactics much. I left a lot of defaults because I assume that by enforcing a kind of play I'll limit my options.

Ready to hear some feedback, although my jaw will hit the floor if anything actually stops my players from just walking around the pitch and punting things over the bar!
G

I cant really see a gameplan in your tactic. So how do you want to play? What options do you want your players to have - you need to think about both a defensive structure and a way to open up the opposition. This can be done in many ways but its really upto how you want your team to play football and get the players for that kinda tactic.

As an example most ppl only look on the stars of the players to value em - thats not the way to do it tbh. If you play a high pressure, work hard fast paced football you dont want Balotelli or Ibra.

Do you want possesion football, control the ball or control the space. The tactics you choose need the players to fill the roles and thats way FM2013 is way better than previous versions imho! In previous versions of FM ppl exploited the ME or just had a pacy team that won it all - Fm2013 makes you play the way YOU want, so take a good time thinking about it.
R

Normally I would try to aim for something like this:

I'm not sure if directness and roaming are compatible though.
F

Set it off of Standard, with a team like that you shouldn't be playing teams like they are equal to yours.. ALWAYS look to control the game. For defensive stability try dropping the AMC into a DMC position and changing it from Hamsik to Jones. Hamsik is better as a CM anyway. Your squad is WAY too big. Sell anybody who won't play. With a DMC, you can allow Vidal/Hamsik, Vidal/Carrick whichever you choose, to be more aggressive in pursuing the ball as there is a safety net in your DMC. Don't play long ball, aerial battles can often come down to chance, and you DON'T have the aerial presence to play long ball. Get the ball on the floor and play it short.
R

Thanks, that's certainly very helpful. I've always been a fan of direct passing because it's one of the few things the Assistant suggests regularly. I guess the issue is I haven't trained short passing.

Understood on the defensive mid. Although some players on Advanced Playmaker have a tendency to drop back heavily when off the ball and play from central mid which is just wonderful. I don't know how to make them do that unless by telling them to mark a mid or something (not ideal).
M

You are actually halfway there with your side. If you want to play 4-2-3-1 I do have a set up you can use: 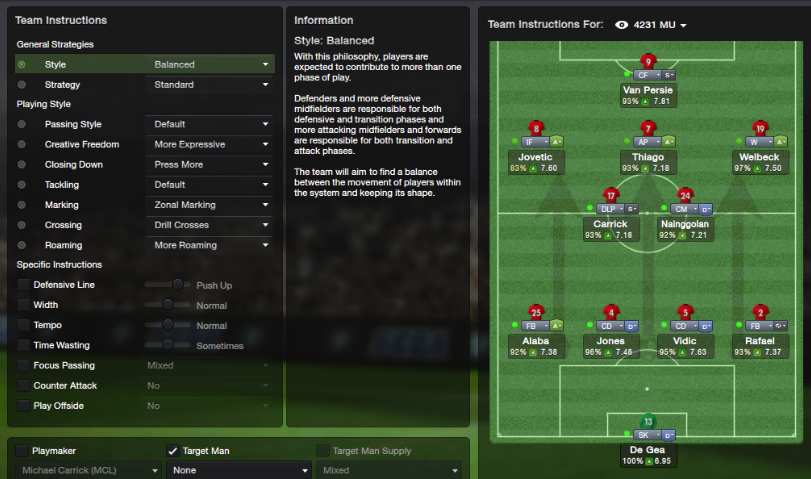 I prefer to work within Control-Standard-Counter. I should add, that I typically drop closing down to default.

I use default passing as it gives me the greatest range, I can use the shouts retain possession and get the ball forwards to change the passing length.

I also like to change the roles and duties to attack a weakness. If they defend I can use and attack duty and use a powerful forward to fight and bully, or support with a creative forward to play a false nine. If they push up, I like a rapid line breaking forward on an attack duty to get behind them/force them deep, which creates space for my AMC.

If you want to use Vidal as a BBM you could try my above setting, perhaps change the AML to an Inside Forward/Support, then Carrick as the DLP/Defend MCL, Vidal BBM MCR, and have the AMR as a Winger/Attack.

If you want to stick with yours, there is not that much wrong. Firstly remove the manual changes to the Defensive Line, Tempo, Counter attack and Offside trap. I would also still set the DLP to defend.

Also you need to realise, your defensive line is not fast enough to play a high offside trap.

Also you might lack overlap from the full backs. I would definitely have Coentrao on an Attack duty, defending isnt his speciality and he is practically a winger.

1.) Young and Nani are making chances shooting from just outside the box, but aren't really creating play, and Hamsik is just distributing to them. How to I get them to make something a bit more passy and complicated? Restrict their long shots?

2.) The players are hilariously tackling everything because I put press more and aggressive tackling. Aggressivity seems to work out, but the tackles are desperate. Is setting to less pressing a good idea?

3.) Chicharito's doing jack but I hope VP and Rooney will be better once back from injury.

Thanks for everything! Very much appreciated.
K

Tune down long shots, and try the 'Work ball into box' shout
R

Beat Atletico 4-1 in the friendly game. Stunned! Did not realize what I thought were motivational problems were tactical problems.

I Went form Derby County I Won the championship came 6th in the prem then got man city job won 2 champions leagues the league and community shield but at the start I always made training tactics until there fluent then cohesion and Defencive positioning
You must log in or register to reply here.
Share:
Facebook Twitter Reddit Pinterest Tumblr WhatsApp Email Link