Juventus - Return of a Legend !

The Juventus board have today confirmed the appointment of legendary former striker Alessandro Del Piero, following the departure of Antonio Conte. Del Piero (37) has no managerial experience, which left many journalists confused.

"Listen, Alessandro spent many years at this club, successful years winning the Serie A on 6 occasions, uefa champions league and europa league amongst many other trophies and personal achievements. Del Piero knows what this club is all about, he knows it inside out and we believe he can relive some of those fantastic nights but as a manager."​ Del Piero is full of laughter and jokes at his first press conference as Juventus Manager.

Mattia Genesio, Italian Chronicle : You stand here today as the new Juventus Manager. As a former player and a big fan of the club, you must be delighted ?

Del Piero : Ofcourse, i have dreamt of this moment for years.

Matt Swan, World Soccer Magazine : You arrive at the club as a replacement for Antonio Conte, who was able to bring success to Juventus Stadium, do you feel you are the right person to take Juventus to the next level ?

Del Piero : Anyone who replaced Antonio would be under the same pressure and its only natural to feel the weight of expectation in replacing somebody of that calibre.

Jacabo Arena, The Turin Football Times : The expectations of a team of Juventus's stature are enormous. Do you feel that you will be able to continue their tradition of success ?

Del Piero : Success is in this clubs blood and the setup here should allow me to achieve just that.
​
F

Del Piero is greeted by his adoring fans as he takes training for the first time as a manager. The Italian gave some insight into his tactics and first team squad.

"I dont intend to change too much tactically. I will stick with the solid 3-5-2 which in my opinion suits this club down to a tee, ofcourse i have my own philosophies and ideas which will be slowly but surely be tweaked into an already succesful set-up. In regards to the squad, there are alot of highly talented footballers here and there won't be any drastic changes. I have been a part of this setup and do have a rough idea on my starting 11.

He also confirmed that Arsenal boss, Arsene Wenger had contacted the club about towering Montenegro forward Mirko Vucinic and have submitted a bit of £18m.

Javier Hernandez thanks United as he moves to Italian giants Juventus in a £13m move. 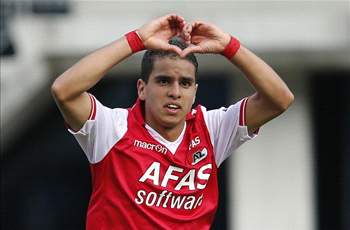 Juventus also secured the signature of 19 year old Adam Maher from Az Alkmaar for a fee of £8m. Maher was immediately loaned out to Genoa to gain some first team football and get used to the Serie A.

Mirko Vucinic Completed his move to the highly competitive English Premier Division signing with Arsenal for an incredable £18m becoming their most expensive signing ever. He was sold in a bid to reduce the number of strikers at the club with the arrival of Hernadez and soon to be Llorente.

The only other departure was Matri who sealed a move to French outfit Lille for £7m as he did not see a future for him at the club.


Alessandro Del Piero spoke to the Italian Times in regards to his ventures in the market:

I feel the fee for Vucinic was a huge fee and was just too good to turn down and paved the way for Javier to join who i feel can really become a legend here at Juve. He scored many many goals for one of if not the biggest club in world football playing in the best league in the world against some of the best defenders in the world, i am delighted to be able to welcome him to this club.

Adam is a truely remarkable player with a lot of potential, potential to be one of the best midfielders in this league. I am optimiscic about his future here in Italy.

Not a bad pre-season at all, i was impressed with the teams defending. We were really compact and solid. Veteran Anelka impressed with his ability to convert when presented with a chance. Asa


"We were not good enough today, we did not create enough chances, we did not give 100% i am upset ofcourse but the better team won. I wish them happiness and joy on their cup win"

"I dont think Andrea should look back and worry about his penalty miss, this is football you win you lose but you stick together as a team, as a family and bounce back stronger."

I will be following. Any chance i could see the tactic you're using?
F

Very poor game. Starman Pirlo just couldnt get things going. Anelka made an instant impact after being introduced in the 82nd minute.

Another bore game, the top players were unable to get involved in the match. Giovinco came off the bench to score a last gasp winner.


Deserved the win. Shouldve been 3 or 4.

Hernadez looked sharp with his off the ball movement. Good win.

"I am pleased with how things have went in September apart from the Genoa game. We look really good defensively and if Javier can settle in quickly and find his feet we could be a force with Pirlo and Marchisio supplying the Mexican. I am Delighted that we are top of the table but we musnt get complacent and just keep striving to give the fans and board our best." Can someone tell me how to screenshot, thanks.
K

Can you throw in some screenshots? Would be interesting to see match stats and individual performances. It adds depth and gets you away from the feeling you are reading a newspaper
K

In-game press Alt+F9 (default shortcut for screenshots) - it saves them in the Sports Interactive\FM\screenshots folder in Documents.
F

We go into October with confidence levels high. Let's see what this month brings

Player Of The Month