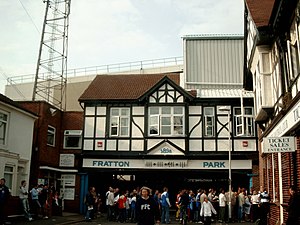 Portsmouth Football Club have been penalised 10 points after entering administration for the second time in three seasons.
The deduction puts the Championship club just above the relegation zone.
Portsmouth had been issued with a winding-up petition by HM Revenue and Customs on 3 January, freezing the club's bank accounts.
The administrator will be Trevor Birch of PKF, a firm with a track record of dealing with clubs in administration. Portsmouth want to appoint Andrew Andronikou , who oversaw the club's last administration two years ago, and is currently handling the same process with Pompey's parent company.
The administration order enables Portsmouth to access their bank accounts and continue trading while Birch, who was proposed as administrator by HMRC, searches for new owners.
In a statement, HMRC said it had been concerned about a possible conflict of interest had Andonikou been appointed.
The statement continued: "HMRC is pleased that the Court agreed with our view that the creditors of any business have a right to expect that the administrator in these circumstances is completely independent."
Mr Birch said he hoped the club's supporters would also be happy to see a new face in charge.
"The intention is to try and sell the club as a going concern," he said.
"I'm used to dealing with clubs in crisis. You could say most of the Championship is in crisis, with 30% of clubs paying wages in excess of 100% of their turnover.
"You have to travel hopefully and confidently. Maybe the new appointment will encourage someone to come out of the woodwork and bid [for the club]."
During the hearing at the High Court, it was revealed that Portsmouth currently owe around £2m to business creditors, as well as a similar sum to the Inland Revenue in unpaid tax.
Among those creditors are fellow football clubs West Bromwich Albion, Wolverhampton Wanderers and Bristol City, as well as the Football League itself. Portsmouth City Council is owed £78,000.
It also emerged electricity and gas suppliers have been threatening to cut off power to the club's Fratton Park stadium for non-payment.
And, although Pompey are set to be docked 10 points for going into administation, they could lose further points at the discretion of the Football League as a result of it happening for the second time in such a short period of time.
Remarkably, this is the third time Portsmouth have gone into administration in recent years. The club also went into administration in December 1998, prior to being taken over by the Serbian businessman Milan Mandaric.
Pompey became the first Premier League club to enter administration in 2010, following which they were relegated to the Championship.
Going into administration for a second time in such a short period was "disappointing" but the only way the club could go forward, according to Portsmouth North MP Penny Mordaunt.
"By going into administration other opportunities will come up for investors, who would have been reluctant to buy the club with a winding-up order hanging over it," she said.
Earlier this week it emerged Portsmouth had recieved parachute payments from the Premier League early, however, chief executive David Lampitt told BBC Radio Solent it would be up to the administrator how money in Pompey's bank account - understood to be around £2.5m - is spent.
Portsmouth's parent company Covert Sports Initiatives went into administration forcing the Championship club to search for new owners.
CSI administrator Andronikou then revealed that Pompey had missed two tax payments of £800,000 to HMRC.
It later emerged they currently owe HMRC £1.9m in unpaid tax as well as between £4m to £7m from the previous regime.
The club announced in January that the wages had not been paid for that month, as a result of having their bank account frozen.
They later failed to gain a validation order to gain access to their accounts, leaving players and staff at Fratton Park still waiting to be paid.
Former owner Balram Chainrai last week said he was flying to the UK to sort out the stricken club's future.
The Hong Kong-based businessman, who owned the club with Israeli Levi Kushnir through a company called Portpin, is still owed £17m.
BBC South understands that any new purchaser would need to provide £12m as proof of funds, and assurances they could meet another £20m in repayments to former creditors, Chainrai and Alexandre Gaydamak.
In a statement issued after the Administration order was confirmed, the PST said it believed the time had come for the club to be owned by the 'city and community'.
"A new model of ownership should be developed which will make sure the shameful events of the past few years are not repeated. Pompey fans never want to see their club in court in these circumstances again."
Last edited: Mar 11, 2013
S

Portsmouth saved by local businessman.
Local businessman workes with PST to buy club.
Portsmouth have been purchased by local businessman John Keegan. Portsmouth Supporters Trust (PST) were initially set to buy the club but Keegan offered an investment in exchange for 60 percent of the club. PST are now the minority shareholders and the leaders of the Trust are on the board. Keegan owns Fratton Park and the club's facilities. Keegan released a statement on the club's website.
"I am delighted to own Portsmouth Football Club. I have been a fan since I was little and now I own the club it is overwhelming. The club are financially secure for years to come and administration will not happen under my ownership. I sold my company for a hefty sum and I will invest into the club but I will not allow the club to spend over it's means because I intend to keep the club debt free. I have decided reluctantly to sell the naming rights of Fratton Park to keep some money in the club's cash reserve. All of Portsmouth's players have left the club due to the change, I am looking to appoint a manager who has fresh ideas and who can steer the club to promotion.
Portsmouth also confirmed that Mark Chamberlain was the only staff member who would remain at the club. Michael Appleton has left to join Blackburn Rovers. - More to follow