StefanCP said:
When you ban somebody you ban him because of facts, not opinions. This is not a personal vendetta nor a church confession.
Click to expand...

you only quoted half the paragraph lol. you ban someone of facts, of course. but when someone is asking you to post something such as game status because they have suspicions, surely its only right to provide it...the only way i can prove it, is by them posting their status, by avoiding posting it, makes me think you're hiding something.

i know this is not a personal vendetta, @Liam gave him a chance to explain himself. i watched the whole thing unfold, i can only feel sorry for TFF, also hugely disappointed. i dont want to make excuses for him, but you have to try and see why he did these actions...for example, say he is suffering from something mentally, surely banning him from a community can only make it worse for him. thats just how i see it, not expecting everyone to see it the same way
V

also, a lot of hypocritical stuff here...we want him banned for breaking rules, yet people are here offending someone, which is against the rules no?

Kidvishis said:
The more I think about it the more I'm annoyed, The amount of tactics over the years I've ignored because of the number of negative replies, which of course is my fault as well for not at least testing them, but still, what an absolute **** take by TFF, no wonder he wanted all the comments deleted before he would "apologise".

Can you imagine tactic creators looking through their old tactics and finding multiple alt accounts of TFF posting negative feedback. The cheek of it.
Click to expand...

This is the main factor for me. Countless makers have prob given up or moved on due to this. He could have tweaked or helped.

Self promotion is unstandable but hijacking others negatively is the main factor for me. Not like he was promoting bad or stolen work, his own work is decent and well liked in the community. Going out of your way to trash others is **** move.
Reactions: ShikariFC, gba83, tom19720930 and 4 others

vitoco said:
Just out of curiosity from me, if I use my homes Wifi, the IP address should be different from the IP address i send msg from my mobile right?
Click to expand...

don't be giving someone ideas now

That guy was sick, create over 70i accounts to give credit to his own tactics, he needs medical help. Well done Liam and the admin team, nice moderation.
Reactions: Folio, gba83, tom19720930 and 3 others
T

Worst part of all this is I'm 100% sure he's actually put people off of playing the game, and in the worst case probably off of buying it. There is no doubt there are people that have enjoyed playing this game and posting tactics on this site (and SI) that have just quit doing that because of the TFF wankfest, which now turns out to be just him and his right hand all along.

Many have been suspecting this for may years (me and a mate was talking about Tzahy obviously being him back in 2016 already), and frankly watching his threads on this site with the constant mini-tweaks that make the tactics 0,42334% better, but only if you have players with 15+ in this and that certain stat (no Messi isn't good enough btw!), just made me tired of playing the game all together.

75 accounts (which is probably low balling it when you count the VPN accounts) making 20 replies each on a thread (again, probably low balling it) is already 1500 replies. That thread is then gonna get a lot of "real" viewers and replies, because it "looks like" it's THE BEST. How can it not be when there's literally 1000s more replies right? I've been trying several of his tactics myself for this very reason, only to be terribly disappointed and moved on to others that worked 100x better (for me), but had 1/10000 of the views/replies.

For every TFF alt account posting fake results in the thread there might be 10-20 "real people" wondering why they can't get the same results. No wonder when Tzahy (his #1 VPN fan) has literally 3,500 posts on his threads. Wonder why he never tried any other tactic with his world class Tottenham squad that just kept winning 7-1, 8-0, 12-1, going on 100s of games of unbeaten runs. Meanwhile everyone else was wondering why they could barely score a goal with their Man Utd, Liverpool or Barcelona squad.

He's literally wasted hours and hours of peoples lives, and undermined the work of every other tactic creator on this site (and SI) for several years! I don't understand how someone can even begin to compare what he's been doing, with someone accusing you of stealing a tactic, or someone boosting their results with FMRTE. It's in now way comparable. You'd go to prison for doing **** like this in a real life market. I really hope he wasn't making money off of this. MediaFire isn't a PPD, so it's unlikely, but it's still possible to make money off of.

And to top it off he comes up with an excuse of "yes, sometimes some of my family post on my threads". I mean seriously?! 75 ****** accounts on the same IP, and you don't even have the balls to admit what you've done. How stupid does he think people are?!

The ban is 100% correct in my book, and I honestly think some of the people commenting in this very thread are still some of his VPN accounts, cause I refuse to believe that people can be THAT delusional.
Reactions: ShikariFC, Folio, gba83 and 14 others

vitoco said:
Just out of curiosity from me, if I use my homes Wifi, the IP address should be different from the IP address i send msg from my mobile right?
Click to expand...

prolly you get a detectable IP it's in the same range.

I'm TTF and so's my wife.
Reactions: gba83, middenface, ExcessivelySalty and 5 others
K 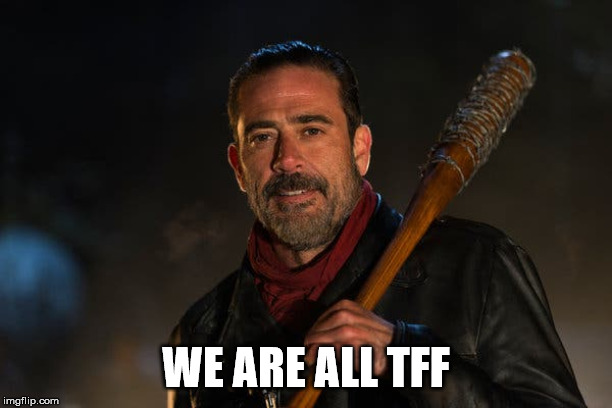 As you can see I never post here, but do look at some of the tactics. I agree you guys have made the correct decision. The fact TFF is making frankly laughable excuses for his behaviour is the final nail tbh. And tbf, if he wishes to continue he'll just have to start again (potentially via VPN I suppose).

It is noticable that very well respected tactic creators like Knap are getting maybe a dozen posts this year, yet TFF posts and generates so many more comments. This news explains that
Reactions: gba83
T

Banned or not, he knows how to make an account ???.
@RDF tactics I love your vision of life/justice.
M

Dec said:
The problem with the internet is we cannot say with proof who is sitting behind the screen. It would make this a lot easier, but we cannot sadly.

As we have said, we are still investigating and while in my opinion it does sound unlikely that none of the 75 accounts were created by himself, we want to unravel the whole story first before making something so final such as a ban decision.
Click to expand...

Dont think he is going to tell the whole truth
S

In my books, he knew how to make working tactics

But that is not an excuse for making so much acc just to boost his treads and ***** on others.

Anyway this forum will miss hes work, especially when SI gave as ****** ME like this one.
E

Even if he does make new accounts to post tactics, we all know his layout and presentation and stuff like that. So it should be obvious who he is.

Screwloose said:
This is all very dramatic for a Christmas period.

The excuse is probably one of the worst I have ever seen, it's embarrassing to read.

The Admins letting it slide is a bad decision, especially for the genuine tactic creators or aspiring tactics creators.

A guy makes 75 accounts to make themself look the best, taking away traffic from other genuine tactic creators, it's wrong.

Grow some balls, and Ban him.
Click to expand...

Hey, he was banned this morning, keep up ?
Reactions: Screwloose
S

Liam said:
Hey, he was banned this morning, keep up ?
Click to expand...

Looks back on the thread
N

This guy is just a shame. No mercy that he has already done dozens of tactics in the past. Like most of you, I am looking for the best tactics and the ratings have misled me.
Reactions: tom19720930
L

Legado said:
That guy was sick, create over 70i accounts to give credit to his own tactics, he needs medical help. Well done Liam and the admin team, nice moderation.
Click to expand...

Man, creating over 70 accounts to give credit for himself; is sick.
Reactions: Folio