​
Today a Thai consortium has announced they have purchased control of Championship club Sheffield Wednesday from Milan Mandaric for a fee to be around the £30 million mark. The Owls, currently 10th in the league, managed by Stuart Gray, have been the center of lots of takeover talk throughout the season with a deal with Hafiz Mammadov falling through earlier this summer. However, now the deal has gone through and the consortium pledging to give Stuart Gray some funds to work with in the upcoming transfer window, the Owls fans could dream about a late play off push?

Despite original reports indicating the consortium want's to change manager with people such as Sven Goran Erikssen been linked in recent days, there has been no indication of this actually occurring. Whoever is in charge throughout the January Window will have their work cut out as the current squad is plagued by injuries and currently only have two fit first team strikers with Atdhe Nuhiu and Stevie May currently injured while young striker Caolan Lavery has just returned from a 6 month lay off with a cruciate ligament injury.

"I'm looking forward to the challenge here in Sheffield. We are going to back the manager in the transfer window as our main intention is to get this football club back into the premier league as soon as possible. We are aware that this season may be too much to ask with current contractual issues with numerous players and injuries which urgently need addressing but we are hopeful with some quality additions in much needed areas that we can push into the top 6"
I 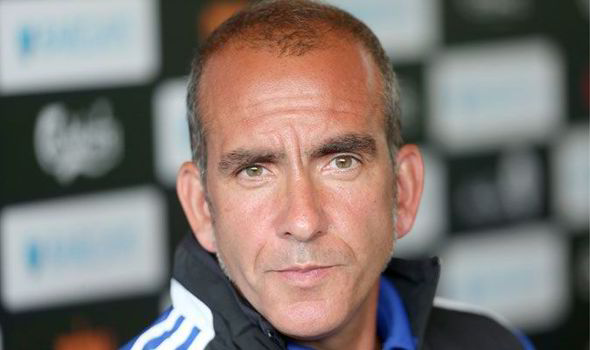 ​
Sheffield Wednesday have today confirmed that former player and former Sunderland and Swindon manager, Paolo Di Canio, has agreed a deal to take over from Stuart Gray as manager. Di Canio, aged 46, played 46 times and scored 15 goals for Sheffield Wednesday back in 1997-1999. Di Canio's exit from Hillsborough was a controversial one to say the least after he pushed a referee and received an 11 game ban and £10,000 fine.

As a manager, Di Canio has been in charge of 108 games winning 57, drawing 21 and losing 30 giving him a win ratio of 52.78% throughout his managerial career so far. Di Canio led Swindon Town to the League 2 title in his first season under difficult financial conditions which earned him a move to the Premier League with a struggling Sunderland side. Di Canio managed to keep Sunderland in the Premier League but lost his job after only 13 games in charge.


"I am really looking forward to taking over at Sheffield Wednesday. They are a massive club, who deserve to be back in the Premier League like when i was last with them. I did a stupid thing the last time i was here and i want to apologise for that and hopefully with some good performances i can repay them for my mistake. I want to get to the Premier League with this football club, 100%" Paolo Di Canio

As a Owls fans i want to wish you luck with this! Not an easy to team to start with
S

Karl Robinson? interesting! good luck with this
I

​
Plenty of rumours are popping up around the country about who new Sheffield Wednesday boss Paolo Di Canio is going to be in the market for after a £30m take over by a Thai consortium. We here take a look at the four people who keep cropping up in various newspapers around the country over the last few days.

Garner has never really got going when playing his trade in the Championship before at Nottingham Forest. Since his move to Preston he has been an extremely prolific striker scoring 45 goals in 92 games for them, just over 1 goal every 2 games. However, his form now means he wont be a cheap option.


Mostly unknown and has been knocking around the lower leagues of English football with Plymouth before moving to Barnsley in the summer for £200,000. The 23 year old has currently scored 10 goals in 21 games from midfield and could be a cheaper option for a goal scoring midfielder which is what Robinson highlights as a key component needed for his team.

The 31 year old is an experienced Championship striker which is what Wednesday are lacking. He has a very good goal scoring record and isn't getting as many games as he would like at Crystal Palace due to Dwight Gale being in superb form. A more expensive option but then again, the Owls do have money now.

Another midfielder who can add the element of goals from midfield to the Owls squad. McGugan has fantastic set piece ability and is currently available for transfer as Watford don't want to keep him. McGugan has a clause in the contract which would enable him to join the Owls for a minimal fee.

Will definitely keep track of this story as a Wednesdayite myself, should be interesting. UTO!
S

wow Murray and Bent! two great strikers for the Championship, should get you a load of goals
S

Just a quick bump, how are you going to be doing this? Have you created a new database for it and changed the clubs finances or have they been taken over in game?
I

Sorry guys my laptop had some problems and has gone in for repair but i am starting it again now on my computer!
I

scottyhamo08 said:
Just a quick bump, how are you going to be doing this? Have you created a new database for it and changed the clubs finances or have they been taken over in game?
Click to expand...

Just started fresh with a complete new computer. Yeah i added a new database and gave the club a decent budget increase but not one that is too unrealistic.
Last edited: Apr 17, 2015
You must log in or register to reply here.
Share:
Facebook Twitter Reddit Pinterest Tumblr WhatsApp Email Link
Top