An unusual clash between a 6-foot (1.8m) alligator and a 13-foot (3.9m) python has left two of the deadliest predators dead in Florida's swamps.
The Burmese python tried to swallow its fearsome rival whole but then exploded.

The remains of the two giant reptiles were found by astonished rangers in the Everglades National Park.

The rangers say the find suggests that non-native Burmese pythons might even challenge alligators' leading position in the food chain in the swamps.

The python's remains with the victim's tail protruding from its burst midsection were found last week. The head of the python was missing.

"Encounters like that are almost never seen in the wild... And here we are," Frank Mazzotti, a University of Florida wildlife professor, was quoted as saying by the Associated Press news agency.

He said the alligator may have clawed at the python's stomach, leading it to burst.

He said that there had been four known encounters between the two species in the past. In the other cases, the alligator won or the battle was an apparent draw.

Burmese pythons - many of whom have been dumped by their owners - have thrived in the wet and hot climate of Florida's swamps over the past 20 years. 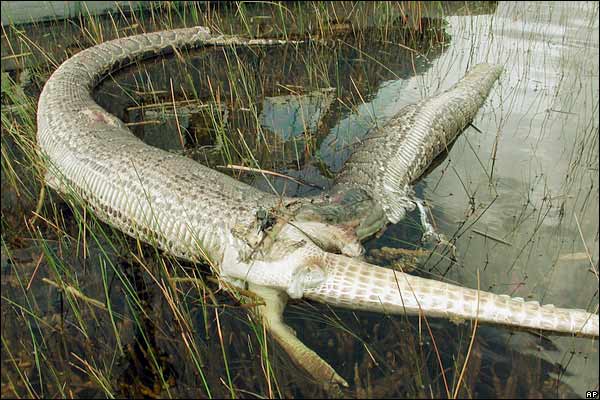 My how lovely
M

That is seriously class !!!!! And that picture is so graphically sick !!!

IS it the allligators side going to the right ?

wow would of loved to be at that figght !!
R

Red = Snake (head missing to the right i believe)

Blue = crocodile (half inside snake to left)
M

ultra cool as they say in yarm !
S

Nice find Redders. First of all, that snake is huuuuge! Second, as if it swallowed an Alligator whole
R

Thanks, well it was twice as big as the gator.

I could eat you whole.
J

The Alligator was probably dead before it tried to swallow it. Dont pythons constrict thier prey?
S

Yeh they usually crush them or suffocate them. But it says in the article that the snake probably exploded due to the alligator clawing at the inside of the snake. So it sounds like it was still alive.
G

I didnt know Phythons were that big. I thought it was the Annacondas that were the big **** off snakes.
R

They are, and snakes also eat stuff which is alive. It depends, i think they are normally alive when digested.
J

Was it a pyphon in the Jungle Book that hypnotized the kid?
Though i wouldnt want to sit there and hypnotize a Alligator!
G