I want to share my best tactics for Premier League! I gained the real success with it managing Southampton. I managed to get the 2nd position of Premier Championship overtaking Arsenal, Liverpool and Chelsea. And that's when my club had had media prediction of 12th position!

My tactical approach consists of the two distinct variants: for Home matches and for Away matches. Both have the same formation as shown below 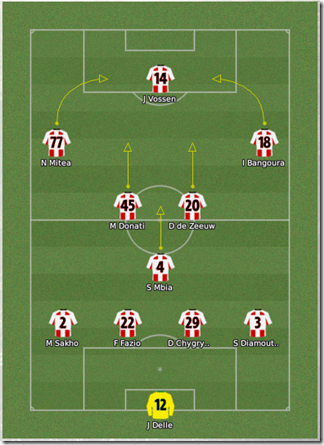 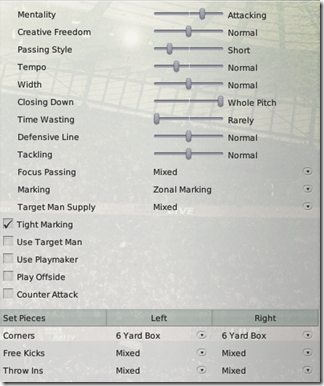 It's home attacking variant with maximal Closing Down, Short Passing and Tight Marking. Actually, these three components are used in the away tactical instructions as well. Tempo is quite low here that allows to loose the ball rarely and have a good ball control. Average value of Defensive Line increases the intention of attacking force in this case. It give effect of closing an opponent on its side of a pitch. Time Wasting has the lowest value because I don't like to waste the time . Normally I change it if there is need to hold up ball in the end of a game. 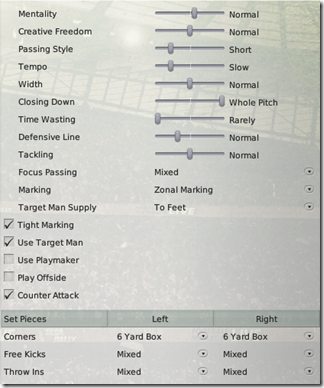 Actually the difference between home and away tactics is concluded in the team instructions. For away matches I have the following differences:

These 5 features make Away tactics very distinct from its Home prototype. Away tactics can be used for Home matches against very strong teams but I haven't been do it in such way during the last championship. Just because Home variant allows to score more goals and provide offensive style of playing.

The both Home and Away tactics can be downloaded here: Football Manager 2008 Tactics - The Best I Created!

Well done with finishing second. Seems like the tactic has done well. You can add it to the FM-Base downloads if you wish. Just click here.
K