Tally Ho! - Taking the West Midlands Police to the top 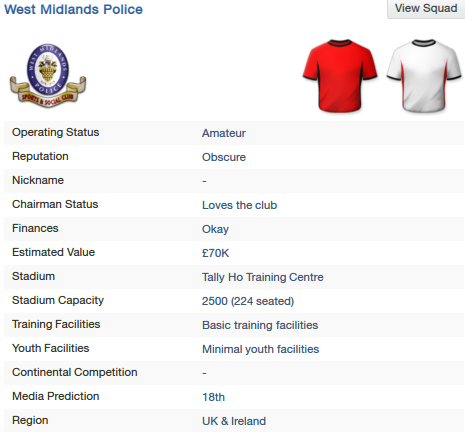 They were established in 1974 and were formed out of Birmingham City Police. They first entered the FA Vase in 1975 and the FA Cup in the 1990–91 season. They won the Midland Combination Premier Division in the 1990–91 season and reached the quarter-finals of the FA Vase the following season. They were league runners-up in 1993–94, and transferred to the Midland Football Alliance, in which they played for eight seasons before returning to the Combination.
Click to expand...

The side competes, annually, in the Police Athletic Association Cup against other forces. Moreover, in recent years, the Police have played against the Queen's Own Hussars for the Hydraband Cup.


The team has in the past had many players who have represented the British Police side – notably Mark Bellingham, Ben Smith and Ollie Latchford.

The aim? get 10 promotions and get the Police to conquer Europe!​
L

Will follow,when's the first update?
I