The march of the green and white 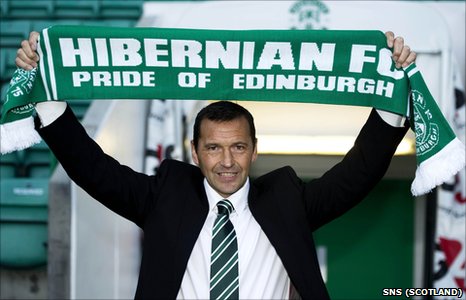 Colin Calderwood has left Hibernian F.C with immideate effect. Calderwood left after his wife took seriously ill. Calderwood had brought in a number of signings, he took Bebe on loan from Manchester United, Renan from Avai, Marko Livaja on a free transfer after his embargo was lifted by fifa. The news was devistating for the Hibernian faithful as they were hoping for a promising 2010-11 seaon, with the new 20 team SPL, but who would take over as manager of Hibernian FC?

Rod Petrie had to work quick to keep the Hibs faithful happy, but who would he pick? Candidates included former managers John Collins, Tony Mowbrey, Frank Sauzee aswell as others including Chris Hughton, aswell as an unknown manager David Baptie. Petrie sat down with every applicant, and decided on one man.

David Baptie, Hibernian fan since he was born. Many were shocked by this appointment but he was a proven in the Scottish lower Leagues, but what could he do in the top league of Scotland. First press confrence

Marc Albresh - The Sun "Mr Petrie, suprise appointment so why Mr Baptie?"
Petrie "David has proven himself well in the Scottish lower leagues, he was respected by all. I found out of his past with Hibernian FC, and I found out that he was intrested, so I approached him and then it was a done deal."

David Tanner - Sky Sports News "David, what this job mean for you? And what are you looking to achive at Hibs?"

David Baptie "This job is the one I've been waiting for this oppertunity for years, and now it has came up, so I've taken it. Now in response to what I hope to achive, I want to bring success to Hibs, 2007 was the last time we won a trophy and I hope to win a trophy in 2011, the fans need a deserve it."

Gary Hooper - Daily Record "A trophy in your first season? Is that a little ambitious, I mean you havent trained with the team yet."

David Baptie "Ambitious? Maybe a little but the players are professionals, they know what needs to happen. Players like Riordan and Murray have green and white blood, so they understand what it means to bring success to this club and hopefully it will be soon."

Ronald Gates - Daily Mirror "David, you have so many talented youths, Baptie, O'Toole, Main, Welsh, Galbraith and Wotherspoon to name a few, what do you make of these players?"

David Baptie "They are the future and I hope to nurish them into future Scotland stars, so I hope Levein will take a look at them and put them into his future squad."

Rod Petrie "This concludes the press conference gentlemen, thank you for attending"

Petrie will release more funds for players than ever before as of Davids high expectations for the seasons forthcoming.
​

Good start, hope you do well, (but not too well haha) I will follow this every so often
H

Man of the match - David Baptie

Man of the Match - DeMerit

Man of the Match - David Goodwillie

Man of the match - David Goodwillie

Man of the Match - David Goodwillie

Man of the Match - Bebe