Arsenal are to sign Guadalajara's teenage Mexican striker Carlos Vela for a fee of just over £2m, according to reports in his home country.

Under the terms of the deal Vela would play for Spanish side Valencia until he is 18, when he becomes eligible for a work permit in the United Kingdom.

The 17-year-old's father Enrique told the Mexican media: "These chances appear only once in somebody's life.

"Guadalajara wanted Carlos to stay, but we have reached an amicable agreement." 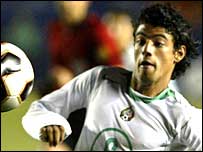 Looks good but instead of buying mercurial young players(reyes,RVP) why dont asrenal buy some gritty, maybe older players who have more substance than flair...

Great signing for Arsenal, wonder what it means though by play for Valaencia, do you think he will actually play.
S