The Tale Of A South American Manager

Not many Chilean mangers make it to the top, not many players know. Though one thing is for sure we always fight for the blood

Many years of football, playing Sunday league football, managing kids for fun, and watching my national team play, made me think, its time to rise. Learning tactics, strategies, players, and managers from all over the world, I though it it would be easy to be the best. I was proven wrong. This is how my story goes.

After watching managers coming and going, it was time for me to try. I was watching Audax Italiano one day, and they seemed to have lost to Huachipato. There manger was sacked, and the same day 3 more were sacked due to vandalisime and fighting with the fans. I thought it was the right time to make up a CV of my "footballing" life and give it a try. Sending my CV and few interviews with Huachipato, Audax Italiano, Cobreloa, and Universidad de Concepcion. I thought it was the right time, and if I were to be lucky, at least one team will take me.

My waiting time was all with just watching European football, and how it would be a good idea to implement it to help Chilean football. I also was learning all about players, and were they would be best to play. Lastly I had a gameplan and was ready for anything that would happen, I had a great feeling and I knew I will make it to the top one way or the other. David Pizarro Speaks​
The Chilean legend, spoke about Mr. Parra since Chilean news paper Lun were all over the place after teams receiving applications from the same person.

Mr. Parra, my friend Gustavo, is one of the most interesting people on earth, he never made it professionally into the football world, but he instead helped me, when I was a young he used to manage my team, and noticed I had plenty of talent, and helped me a lot, until I reach a good potential, and gave Santiago Wanders a call to give me a trial. With out him I would not bee here right now. I have to tell any of the clubs that got his CV. SIGN HIM UP!
Click to expand...

Audax Italiano it is!
​
Shortly after Pizarro's speech about Mr. Parra, or simply Gustavo, it seems that Audax immediately asked him to sign a contract and for him to be the new manager of Los Tanos also learning that he is in fact part Italian, it seems he actually is perfect for the club. He was asked who he thinks his key player will be this year


Gustavo Parra said:
Key Player, will be Marco Medel this year, only being 21 he is one of the most complete players in Audax, he can score, and assist goals, and always look deadly in a match, he will help the team succed and win a title this year, as I promise I will win something this year to bring this team back to life.

Audax Italiano Legend To Return?​
Only 3 days in Audax and he is already talking to Carlos Villanueva, about a return to Audax, currently playing at Al-Shabab and having a good time, Villanueva still keeps his options open, but Manager Parra thinks its very unlikely for Villanueva to return since its way to much money, and Audax don't have that kind of amout to bring him back. Though a loan deal could still happen instead

The key player of pre-season has to be Miguel Orellana, assisting goals and scoring goals, he will defiantly help us win something this year, and I was suprised by his efforts, great player, and he's only 21, he will be one of the best.

Only a few days, and Mr. Parra, has let 13 players go, but bringing the exciting Huachipato player to join Audax. The left-back having a total of 58 appearances in his life he has scored 6 goals. This intreasting signing will help Gustavo achieve what he wants in the league. Also he had something to say about what he will do in the last transfer days.
"I will be looking to buy at least one more player, it seems the team is well rounded and does not need more signings apart from many one last one. Also I will be looking to get rid of the assisant manager after suffering a 5-0 to a simple game, it looks that I will have to take a close look as at the staff."
L 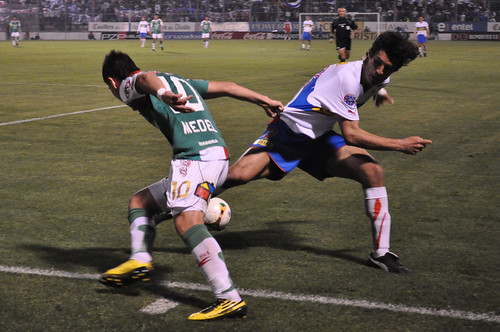 Very disappointing match by Audax, but a great match by la Catolica, they played their hearts out there, and showed who the better team is. As for Mr. Parra's debut into the big time it was ruined by la Catolica, what will he do next is unknown, but he without a doubt has to do some-thinking once continuing with this team to allow and show who Audax really are.


I KNEW HE WAS NOT THE RIGHT MAN!

Colo-Colo manager legend, Claudio Borghi, had the time to tell the people that he knew Gustavo was not set for the job and should be sacked right away after such result, telling the fans he does not deserve to manage Los Tanos
L

Audax get there first win and 3 points with manager Gustavo in charge, after looking a little down with the Catolica match, but it seems a lockerroom talk and tactical changes, have made this team better, and beating a good team like Huachipato 2 - 0. Great match by Audax and many more to come, in the eyes of Mr. Parra.


Gustavo, to become one of the best

Chilean legend Marcelo Salas, had a lot to say after the match and was suprised by the result Audax got here tonight. "I'm impressed by Gustavo, not anyone just comes and wins a match 2 - 0 against Huachipato and not having any real football history, maybe if he keeps it like this he could become one of the best."
D

bit of a bad defeat at the start of the season, but pulled it back

drezzy86 said:
bit of a bad defeat at the start of the season, but pulled it back

Looking forward to seeing this story grow
Click to expand...

Like your support, saw your Boca Juniors story, class.
D

Just one thing, Do you know alot about Chilean football. That Universidad Catolica got some amazing results in my save, against teams like Santos, Fluminese and Argentinos, are they really that good?
L

Just one thing, Do you know alot about Chilean football. That Universidad Catolica got some amazing results in my save, against teams like Santos, Fluminese and Argentinos, are they really that good?
Click to expand...

Audax second win comes from a strong team, Cobreloa, both teams gave it their all, but one came on top, and it had to be Mr. Parra's Audax they gave it their all, and have been imrpoving day after day, and can eventually be the best, hopefully they will be happy to have gotten Mr. Unkown.


WHO IS THIS GUY?

Back in his Cobreloa times​
After young Chilean player Alexis Sanchez heard that the team that found this player, lost 2-1 to Audax, but from an unknown manager, made him think and be angry at his youth team. "Who is this guy?!?!, I never thought they were in such a big crisis until I saw this result against a nobody, they need to pick themselfs up from such an embarissing defeat."
K