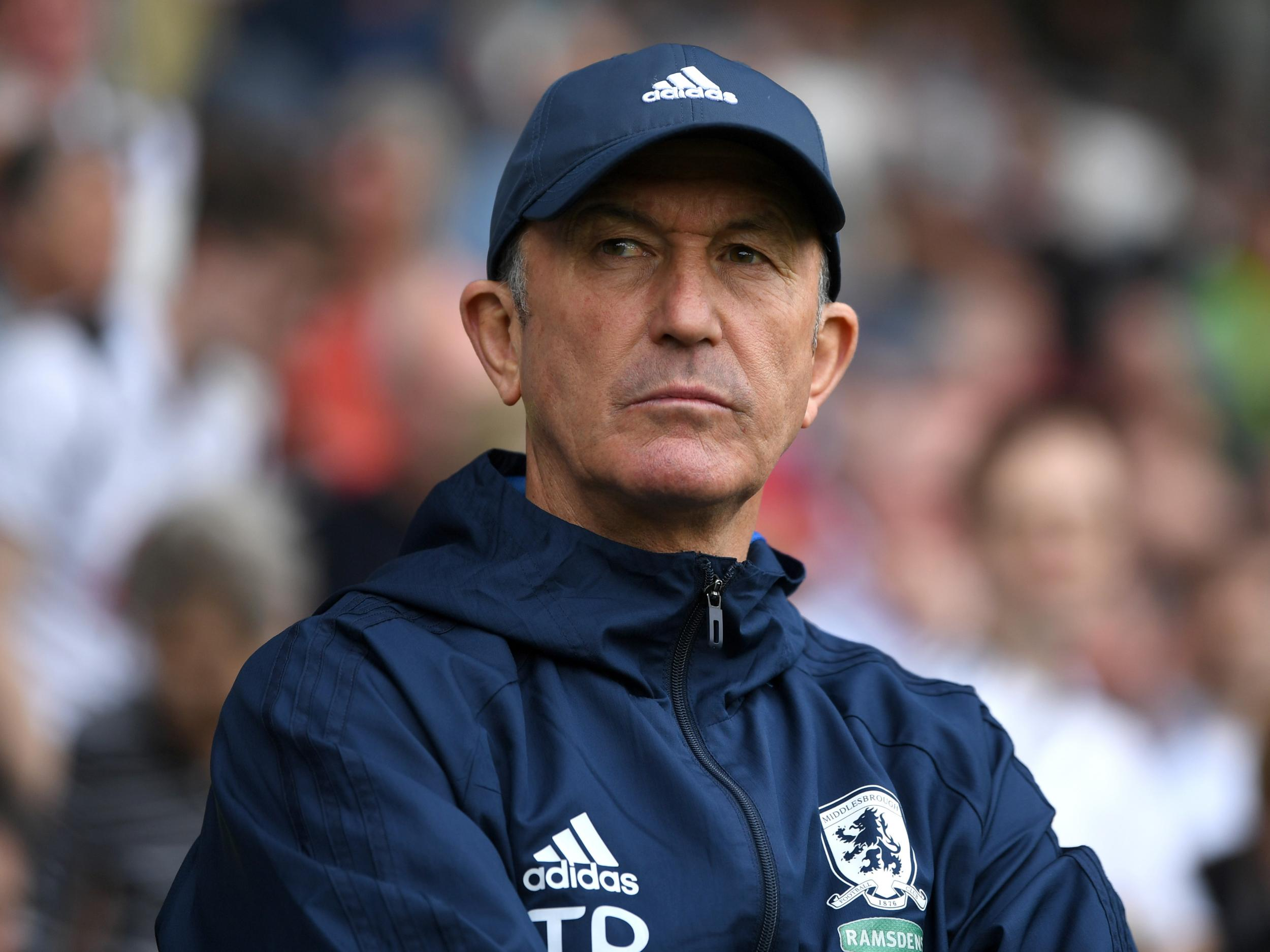 Tony Pulis: Millwall Appoint New Manager
​
Millwall are delighted to confirm the appointment of Tony Pulis ahead of the new 2019/20 season.

The Welshman brings a wealth of experience to the club, having previously managed in the Premier League for the last decade with Stoke City, Crystal Palace and West Bromwich Albion.

He has managed more than 1,000 games and has not only won promotion to the top flight, but has also reached an FA Cup final, and guided Stoke into the Europa League.

Chairman John Berylson said: “We’re delighted to appoint Tony as our new manager. His experience and knowledge speaks for itself and he has a tremendous track record.

“We’re excited by this appointment and by what Tony can bring to this football club. There was strong interest from two other clubs, and we’re delighted Tony has decided to join us.

The club’s new manager said: “I wanted a challenge - a real challenge - and this reminds me so much of Stoke when I went there with Peter Coates. John Berylson is a football man who understands the game. I have great respect for him as a person and an owner.

Having been in discussions with various clubs, Millwall's club culture of playing direct football is exactly inline with the ethos I want to instil here. I will be looking to play hard, aggressive, disciplined football that utilises route one football and attacking set pieces." 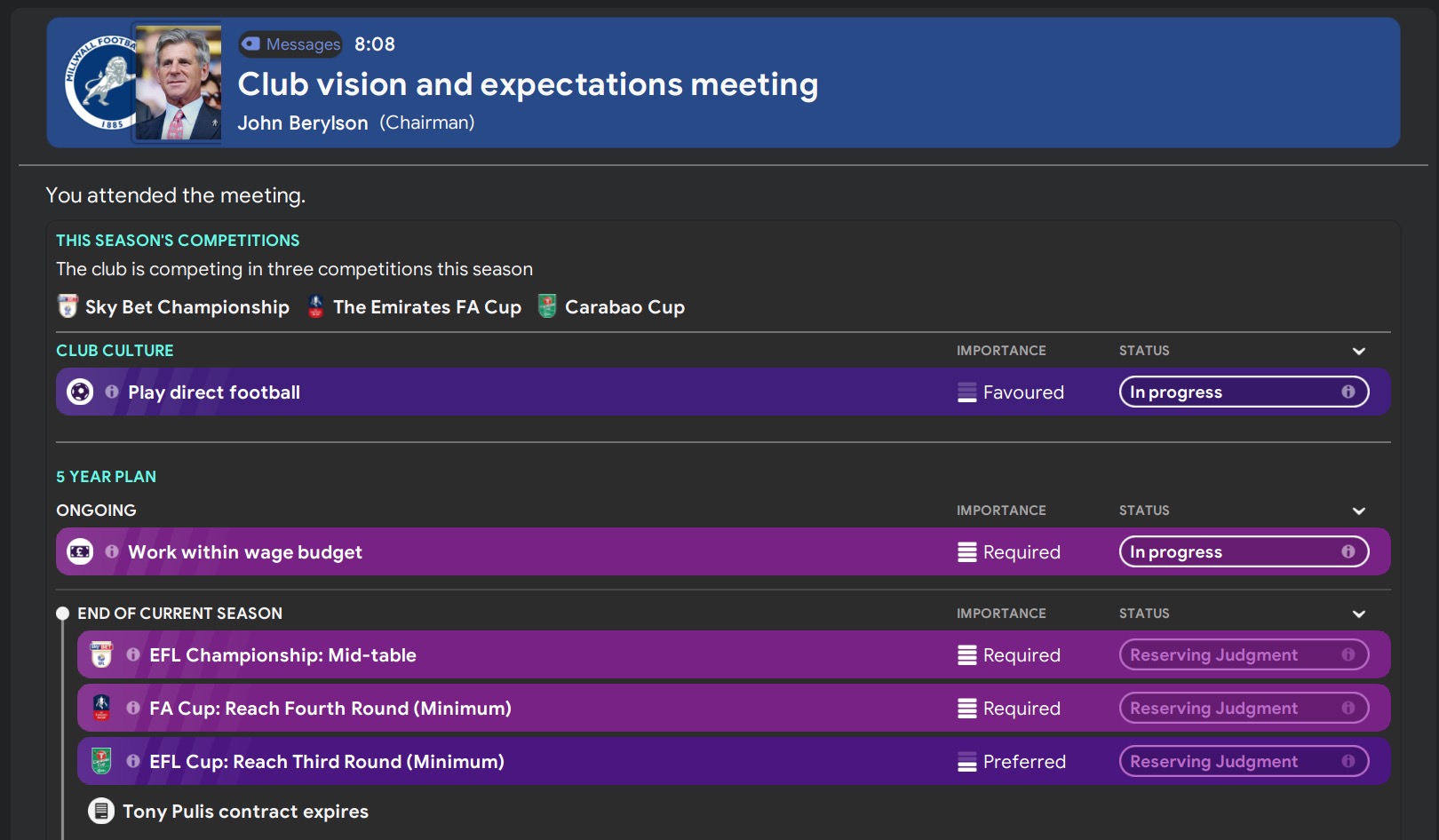 So having searched around for a club I settled on Millwall solely because of the club culture and figured it would make the perfect place to start my journey. They want me to play direct football which is going to be the only way I know how... none of this Tiki-Taka nonsense!


The save is pretty straightforward, rather than adjusting a formation around my players and new signings I will be creating my route one tactics and making my players play the way I dictate. So I will be looking for certain attributes in players that suit the roles I need as opposed to relying on the best players my scout reports identify. So need a long-throw specialist etc.


The only transfer rule really is that I am only going to be signing players over 6ft just to create that additional physical element. Players already at the club can stay as well as those developed through the youth academy ​
Last edited: Aug 2, 2020
Reactions: sikafred, Hampus Silverholt, Schnauzer and 3 others
Z 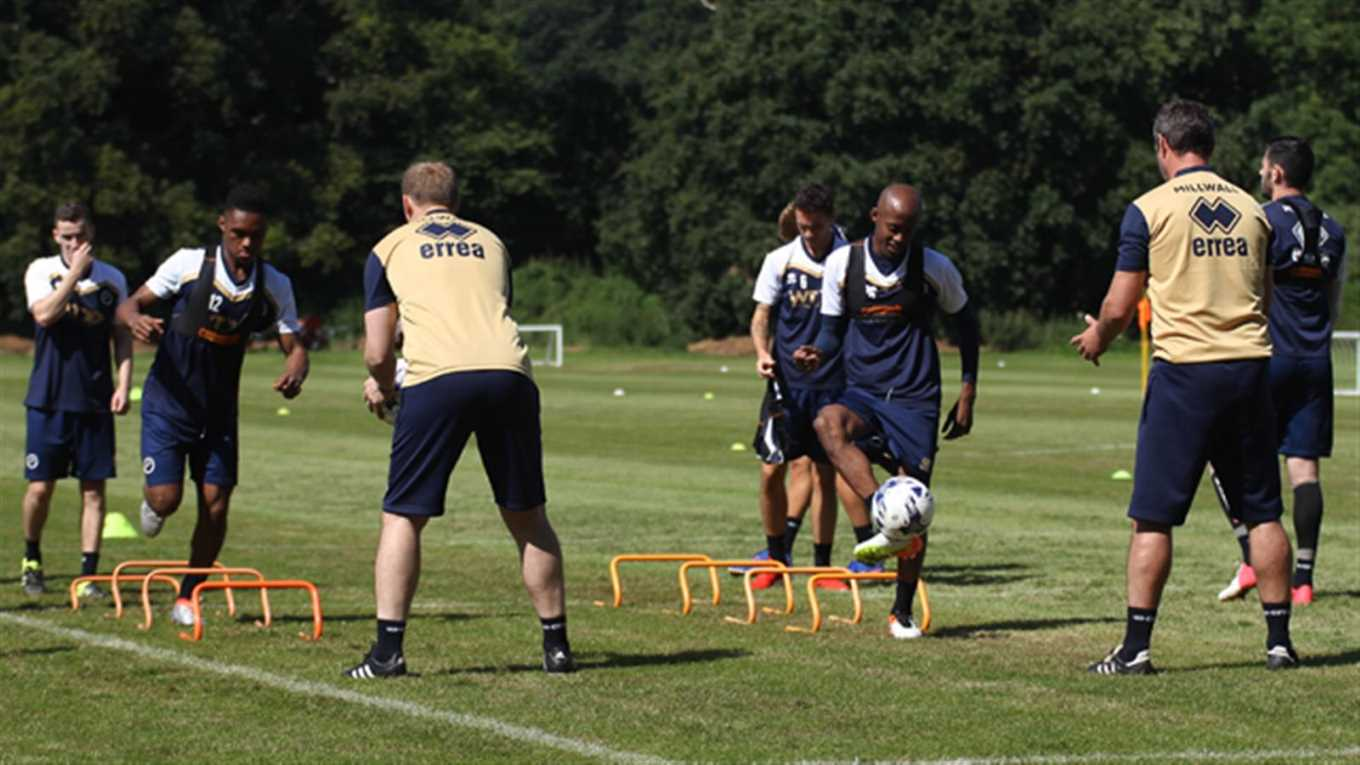 It's been a pretty mediocre pre-season in all honesty - We've looked good at times and really poor in others so still plenty to work on. Defensively I don't feel we've been up to scratch, conceding 12 goals in 7 games and only 1 clean sheet. Our attacking play has actually been pretty good and have been taking our chances but need to see more from our set-piece routines.


The inherited squad is pretty well balanced for the classic 4-4-2 formation which is mostly what I've been working on. With a limited budget I will be giving the majority of the squad a chance to impress and waiting until January for any major transfer activity. 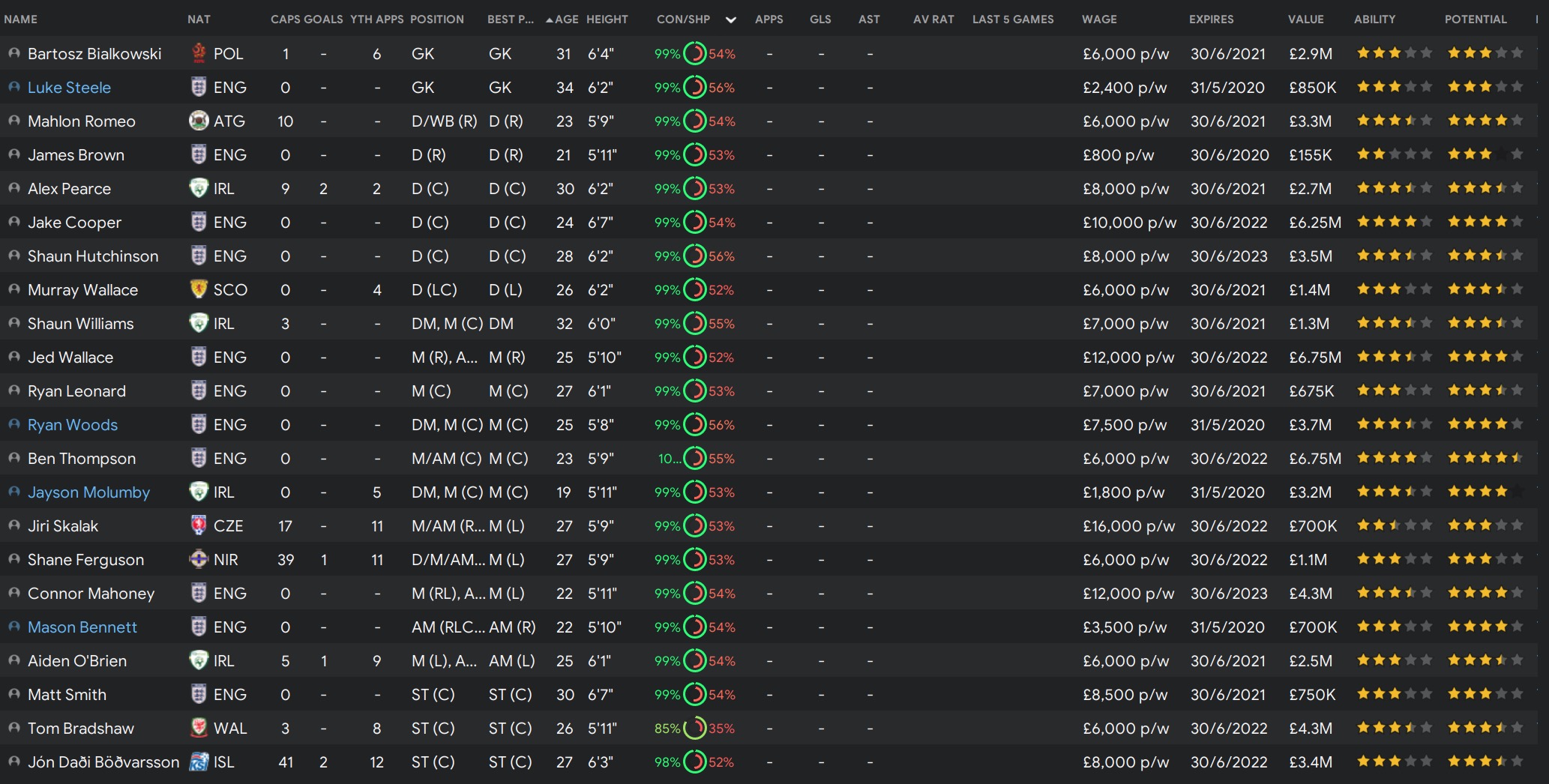 
Jake Cooper (CB) - A colossal figure at the heart of the defence standing at 6'7" and a jump reach of 19 he will surely be a dominant figure both defensively and from attacking set pieces. He fits the profile pretty well for what I want so am expecting big things from the lad.

Ben Thompson (CM) - An aggressive, hard working midfielder is exactly what I wanted in midfield and Thomson looks to offer just that. His stamina will enable him to keep driving on all game at both ends of the field but will mostly be looking for him to break up any opposition attacks.

Matt Smith (ST) - A target man is a pivotal role for my long ball philosophy and Smith's attributes look very exciting. He looks capable of bullying any opposition backline and getting his head to any long balls pumped forward. I just hope he can perform the way I envisage it in my head!

Not much of a budget to work with and the only signing made is Alan Hutton on a free, the others were made before my arrival. I managed to loan out a couple of players to lower the wage budget including Jiri Skalak who was on a whooping £16k p/w the highest in the squad and not even making the bench.

Alan Hutton (RB) - Obviously not a long term signing but needed another RB in the squad and he offers plenty of experience on a 12 month contract. Gives me time to find a long term player and was drawn to his long throw ability as we look to get that going this season.

We are working with one of the lowest wage budgets in the Championship and predicted to finish 18th this season and avoid any sort of relegation scrap. This is a season to really test the waters and tweak my tactical formation so a nice mid table finish would go down a treat. 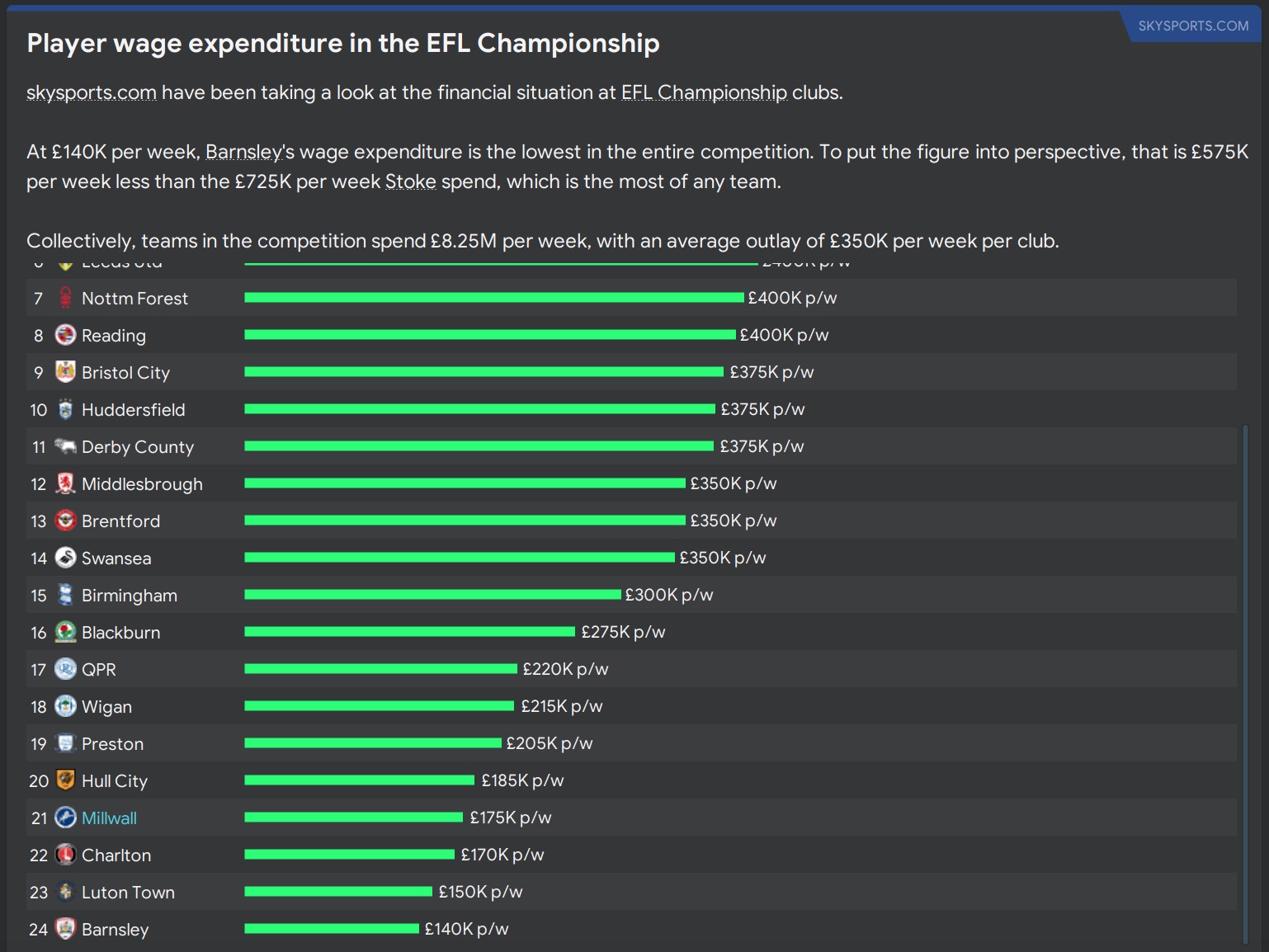 It's been a steady start to my tenure as Millwall boss as I try to impose my style of football onto the team. Although it is very early days we've had some decent results, most noticeably our victory over Fulham at Craven Cottage which has left us in 6th at the end of the first month.


Clearly I'm still having some issues playing the style of play I want and as you can see from below we really haven't made the most of set pieces, crosses or long balls which is the style of football I pride myself on. I'm going to ramp the training up to really focus on set-pieces next month to see if we can get a break through. Tactical tweaks may also be needed to better utilise the long ball.

We have scraped through the first 2 rounds of the EFL Cup via the shootout. Both were tricky away fixtures so am pleased to still be in the competition and a Home Draw to Reading is about the best we could have hoped for going into the 3rd round.